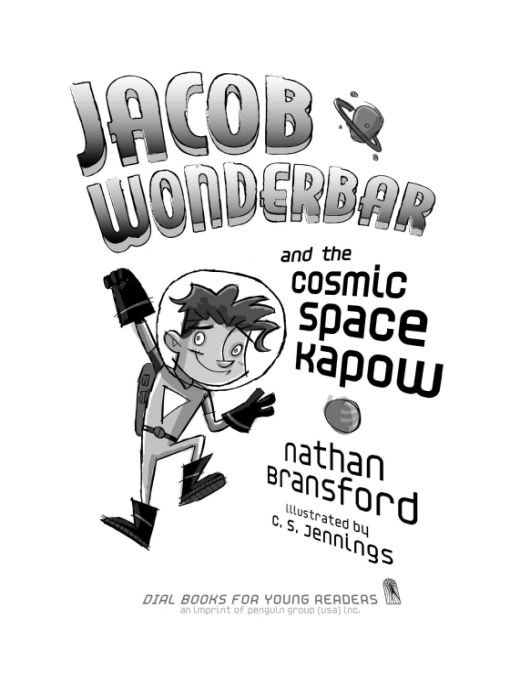 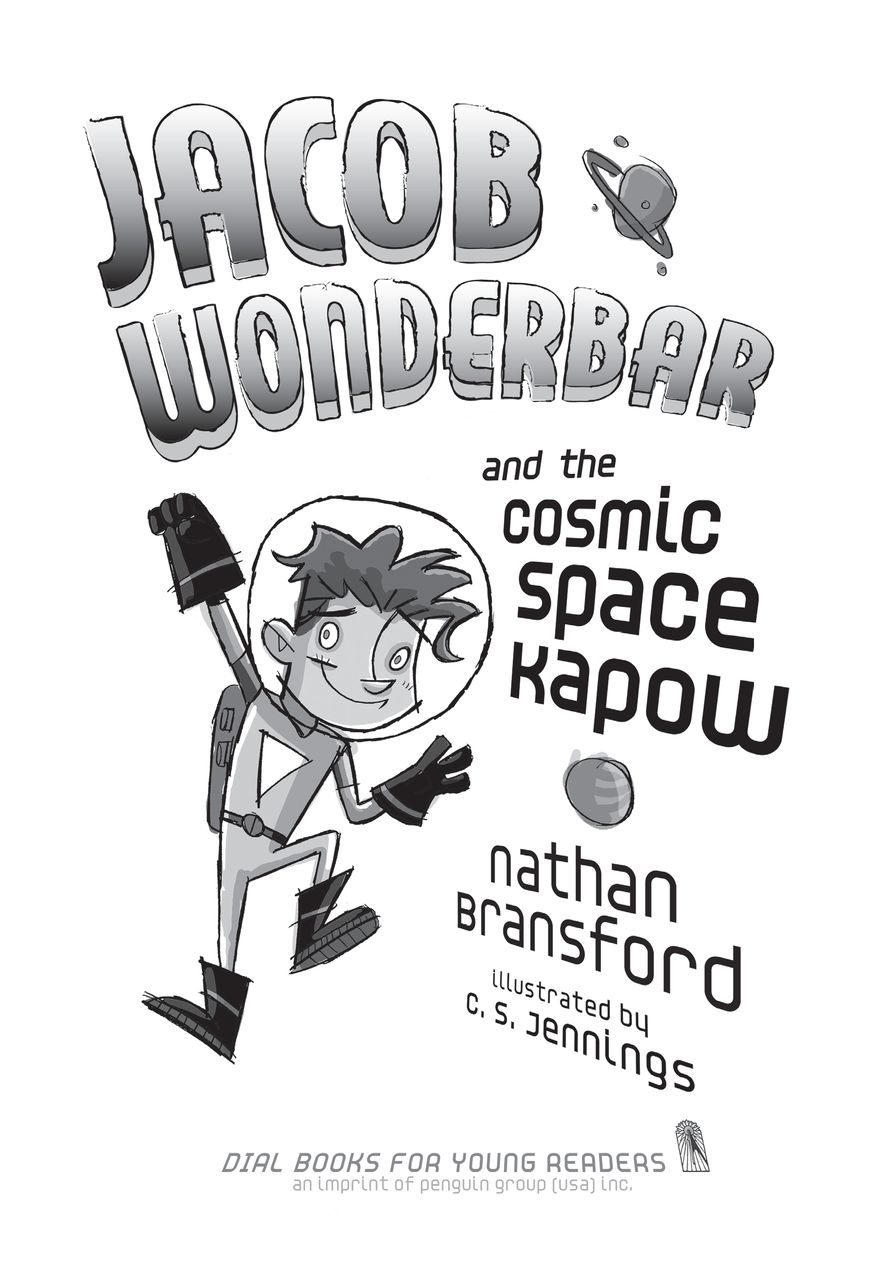 CHAPTER 1
E
ach type of substitute teacher had its own special weakness, and Jacob Wonderbar knew every possible trick to distract them. Male substitutes with long hair and women in tie-dyed skirts often had a guitar stashed nearby and were just waiting for an excuse to ditch the lesson plan and play a song. The mousy ones who spoke softly and tentatively when they introduced themselves would patiently answer every absurd question Jacob asked them and would be confronting a classroom gone wild within minutes.
Older subs were more challenging. Having endured a lifetime of rowdy classrooms, they better understood that children were their mortal enemies. They came to class early and peered out warily through thick glasses, ready for battle. They armed themselves with ancient metal thermoses and cranky dispositions.
Jacob sized up the new sub and wondered if he had finally met his match. She was impossibly tall and thin, with a wart on both cheeks and a glint of evil in her eye. She wore a long faded dress with a hideous floral print. Her shoes were clunky and beige. Everything about her seemed crooked: Her fingers were spindly, her posture was hunched, her nose was bent. She had a crooked set of yellow teeth and foul breath that smelled like burned coffee and rotten eggs.
He watched carefully as she scrawled “Mrs. Pinkerton” on the chalkboard and underlined it six times with increasing ferocity. Her handwriting dripped with malice.
She was the scariest substitute teacher he had ever seen.
With a lurching twitch, Mrs. Pinkerton cleared her voice, a mixture of gravel and syrup, and warbled, “Good morning, class.”
Jacob's classmates were too scared to reply. He knew they were counting on him to gain the upper hand. He was Jacob Wonderbar, substitute teacher slayer extraordinaire. He had forced more subs to flee the classroom than he could count. His mission was simple: Distract the substitute from the lesson plan without getting sent to the principal's office. Bonus points for making them reconsider their choice of profession and/or purpose in life.
Mrs. Pinkerton smiled, sending a chill down Jacob's spine, and warbled again, louder this time, “I said good morning, class.”
A few of Jacob's classmates answered with a quiet, nervous, “Good morning, Mrs. Pinkerton.”
Jacob looked over at Dexter, his trusty friend with messy brown hair and a perpetual look of fear in his eyes. Jacob whispered, “This is not good.”
Suddenly a ruler appeared in Mrs. Pinkerton's hands and she furiously rapped a table. “I. Heard. That.” Silence filled the classroom. Dexter buried his head in his arms.
Mrs. Pinkerton slinked over to Jacob's desk. She appeared to grow taller with every step. She loomed over Jacob, and he smelled her fearsome breath. “Are you Jacob Wonderbar?”
Jacob smiled at her rookie mistake. Never let a sixth grader identify himself. He shook his head. “No, sorry, you have the wrong ...”
Mrs. Pinkerton cackled without smiling. The back of Jacob's neck prickled. “Of course you are. I've been
warned
about you.”
She turned to walk back to the front of the class but suddenly whirled around, leaned forward, and jabbed a crooked finger in front of Jacob's face. “I'm watching you,” she whispered. 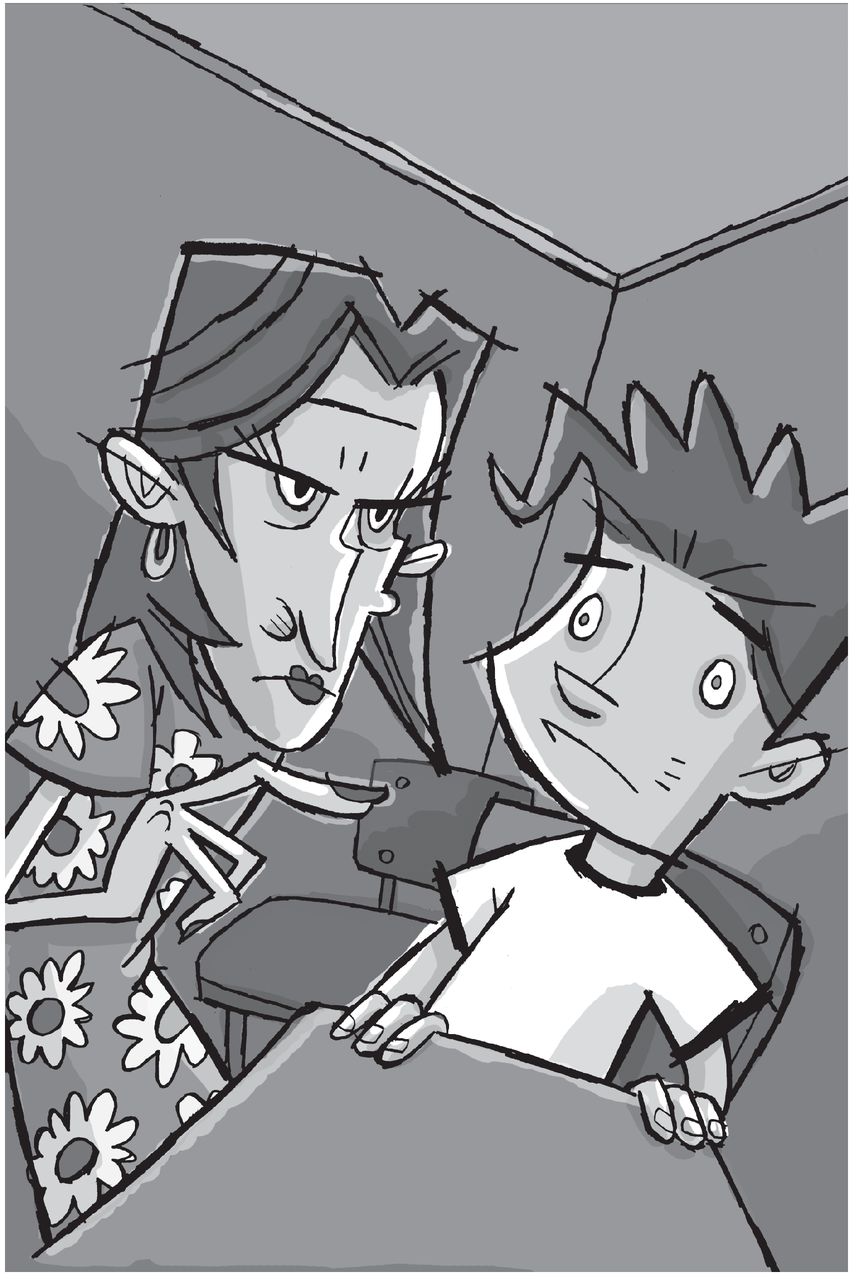 Jacob felt a sudden pain on his earlobe, which could only have meant one thing. Sarah had flicked it.
Sarah sat behind Jacob. She was a very pretty girl with piercing blue eyes and golden hair, and the one thing in the entire world that drove her the craziest was when people called her by both her first and last name, “Sarah Daisy.” She said it made her sound like the girliest girl on the planet. Needless to say, she did not appreciate it when Jacob passed her a note that said, simply, “Sarah DAISY.”
Sarah flicked his ear again, even harder than the last time.
“I HEARD THAT!” Mrs. Pinkerton shouted. As she stomped over to Jacob's desk again, he smiled at his good luck. Sarah never got into trouble, and this time she was caught red-handed. Getting in trouble would make her mad, and Jacob found her quite hilarious when she was mad. Which of course only made her angrier.
“Jacob Wonderbar, you have two strikes.”
“Me? She was the oneâ”
“Zip it!”
“Butâ”
“Zip!”
“Iâ”
“ZIP!”
Jacob slumped back in his seat. Dexter raised his head out of his arms and shook it slowly, warning Jacob not to push it this time. He knew what Jacob was thinking before Jacob knew what Jacob was thinking. Then Dexter buried his head in his arms again.
Jacob shook off Dexter's warning. He waited until Mrs. Pinkerton was facing the chalkboard and coughed “
Pinkerton
” into his arm, hoping to inspire the class into a sudden fake coughing fit.
“
Demerit
,” Mrs. Pinkerton immediately coughed back before any of Jacob's classmates could so much as inhale. She walked over to Miss Banks's demerit chart and moved Jacob's card five slots to the right, an unexplored region of demeritdom that he had previously assumed was only reserved for criminals.
Jacob's ears burned as he weighed his options. He thought about his mom, at work in some hotshot meeting probably. He knew that if he was sent to the principal's office it would mean she would be called out of work, then she'd arrive at the principal's office with a red tint in her cheeks, and when they got in the car his mom would look straight ahead and say, “I don't want to say anything I'll regret later,” and then they'd ride home in complete silence. He had already promised to never land himself in the principal's office ever again.
But Mrs. Pinkerton had to be stopped.
“Dexter Goldstein?” Mrs. Pinkerton called out.
One eye appeared out from Dexter's tangled arms. “Present?”
Mrs. Pinkerton rapped her knuckles on her desk. “I am
not
calling roll. It is science time. I must insist that you stand in front of the class and recite the first fifty elements of the periodic table.”
Jacob's class had only studied the first ten elements. Dexter shook his head, since there must have been a mix-up. “But weâ”
“There is no mistake!” Mrs. Pinkerton yelled. “And I'd hate to think what would happen if you were to get one wrong.”
After hesitating for a moment, Dexter slumped out of his chair and stood in front of the class. He gazed out the window and Jacob assumed that he was considering the possibility of an escape. Dexter looked at Jacob with an expression that said: “These twelve years have been nice and everything, but I am definitely going to die at the front of this classroom.”
“Well?” Mrs. Pinkerton asked.
Dexter stared at his feet. “Um . . . Hydrogen?”
“WRONG!” Mrs. Pinkerton thundered. “I do not see
umhydrogen
anywhere on the periodic table. I suggest you try again without stuttering.”
Jacob heard Sarah take a deep breath. The class was completely silent. Dexter's face was pale.
“Hydrogen,” Dexter whispered.
“Correct,” Mrs. Pinkerton said. “Next?”
“Um . . .”
The class gasped.
Dexter held up his hands. “I mean, not um. Definitely not um. Starting over. Pretend I didn't say that word that I definitely . . . did not say.” Dexter took a deep breath. He took another. “Helium?”
ADS
15.4Mb size Format: txt, pdf, ePub

Nightside the Long Sun by Gene Wolfe
Floating City by Eric Van Lustbader
Tempting the Marshal: (A Western Historical Romance) (Dodge City Brides Series Book 2) by Julianne MacLean
The Manny Files book1 by Christian Burch
Coming Attractions by Bobbi Marolt
The Outsmarting of Criminals: A Mystery Introducing Miss Felicity Prim by Rigolosi, Steven
The Shadow Dragons by James A. Owen
Landing the Air Marshal (Snowpocalypse) by Jennifer Blackwood
Ever After by Graham Swift
2 Bodies for the Price of 1 by Stephanie Bond