Authors: A Most Unsuitable Man 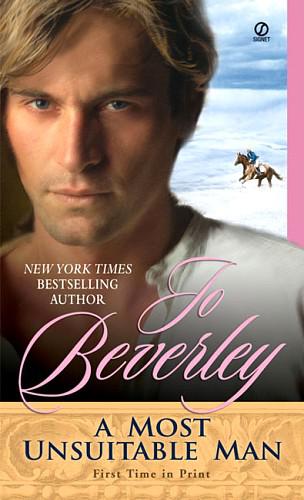 Jo Beverley is
“One of the great names in the genre.”*

The Award of Excellence

Member of the Romance Writers of
America Hall of Fame

Member of the Romance Writers of America Honor Roll

“Beverley beautifully captures the flavor of Georgian England…. Her fast-paced, violent, and exquisitely sensual story is one that readers won’t soon forget.”

“Romance at its best.”

“A fantastic novel. Jo Beverley shows again why she is considered one of the genre’s brightest stars.”

“Storytelling at its best!”

Lord of My Heart

“The Demon’s Mistress” in
In Praise of Younger Men

Secrets of the Night

Jo Beverley
A MOST UNSUITABLE MAN

To the “Get Caught Reading at Sea”
readers. You were all so much fun,
especially in the “gaming hell.”

O
n this, the day after Christmas, the great hall of Rothgar Abbey was merry with holly, ivy, and mistletoe, all tied up with festive ribbons. The massive Yule log burned in the hearth, and spiced oranges scented the air.

The Marquess of Rothgar had invited many of his family to his home this Christmastide, and this chamber had been the heart of the celebrations. Now, however, the guests were drawn to a very different sort of entertainment.

No one was surprised at that. The Trayce family, headed by Lord Ashart, had been at daggers drawn with the Mallorens, headed by Rothgar, for a generation. All of the guests had been astonished that Ashart had attended the gathering, and no one was surprised by the dowager’s outrage. But how could he respond to being ordered around like a puppy? All eyes turned to the handsome, dark-haired young man who was notorious for his temper.

“Why not stay?” Ashart asked the dowager with remarkable mildness. “There are family matters to discuss.”

“I wouldn’t stay in this house if it were the last one in England!” she snapped.

He shrugged. “Then allow me to present to you the lady who is to be my bride—Miss Genova Smith.”

Not a few of the guests gasped, while others began to compose in their minds letters to friends describing the shocking announcement. Ashart, to marry his great-aunts’ companion!

“What?”
screeched the dowager, turning red as a holly berry. Then she looked around with furious eyes. “I heard the Myddleton chit was here. Where is she?”

All eyes turned to a straight-shouldered young woman in a green striped gown whose cheeks suddenly flushed with red. The color didn’t become her and she was no beauty to begin with. Her hair was an ordinary brown, her eyes blue, and her lips too thin for fashion. At the moment those lips were tight with anger.

Damaris Myddleton hated being the center of attention, but she’d been watching the scene in horrified fascination and growing fury. Ashart was
hers
.

When she’d discovered she was rich she’d determined on making a grand marriage. She’d had her trustees draw up a list of the neediest young, titled gentlemen in England. She’d studied it carefully and picked the Marquess of Ashart.

Since then, she’d visited his country seat and been approved by the dowager. Her trustees were even now negotiating with Ashart’s lawyers, drawing up marriage settlements. It was all settled barring the formal proposal and the signatures. He couldn’t marry someone else! He needed her money, and he was her key to her acceptance into the world of the aristocracy.

What should she do? Her instinct was to shrink away from so many unfriendly eyes but she would not be a coward. She stepped forward and curtsied to the old lady. “I’m glad you’ve arrived, Lady Ashart. I haven’t known what to do. As you know, Ashart is already promised to me.”

Silence fell, and it was as if a chilly draft brushed Damaris’s neck—a faint warning that perhaps she’d just made a terrible mistake. She glanced around, painfully aware of being an outsider. She had no blood connection to the Mallorens, and was here only because her guardian was Lord Henry Malloren. She came from a simple family and she didn’t know the rules of this world. Had she broken an important one?

Part of her wanted to run away and hide. But she would not—could not—let Genova Smith steal Ashart from under her nose!

“Of course she is,” Ash snapped.

That brought hot, angry blood to Damaris’s face and fire to her courage. “How could I be mistaken about that?” She swung to the dowager. “Is it not true?”

It seemed as if all the listeners held their breaths.

Lady Ashart fixed cold eyes on her grandson. “Yes,” she said. “It is.”

Damaris swung triumphantly to the marquess, but before she could demand an apology, Miss Smith reacted.

“You rancid fish!” she yelled at him. “Scum on the sewer of life!” Then she ran into the breakfast room and returned to throw food at him.

Damaris watched, as aghast as everyone else, but inclined to cheer Miss Smith on. She’d like to hurl some stewed fruit at the wretch herself.

But then Ashart went onto one knee, stained, messy, but still gorgeous. “Sweet Genni, forgiving Genni, redoubtable Genni. Marry me? I love you, Genni, I adore you—”

“No!” Damaris screamed, her voice clashing with the dowager’s bellow of “
Ashart!
”

Damaris ran forward in a rage, but strong hands snared her from behind. “Don’t,” a man said softly in her ear. “You’ll only make it worse.”

Fitzroger. Ashart’s friend, who’d pestered her over the past days, preventing her from staying as close to Ashart as she’d wished. And look what had come of it! She struggled but was relentlessly drawn back out of the crowd, farther away from Ashart.

A hand came over her mouth, and then another pressed at her neck.

Damaris came to her swimming senses to realize that she was being carried upstairs. Carried by Fitzroger. She couldn’t find the will to protest, for behind her she heard chatter and laughter.

Oh, God.
She’d lost Ashart! But worse than that, everyone was laughing at her. She’d mortified herself in front of the people she’d tried so hard to impress, among whom she’d hoped to belong. Now they were laughing at that silly Miss Myddleton who thought her wealth could buy her a place among them. Miss Myddleton, daughter and heiress of a man who, after all, had been little better than a pirate.

She was placed on her bed and could hear her maid Maisie’s anxious, questioning voice. She kept her eyes closed, as if that might change everything, make everything right. Someone raised her and put a glass to her lips. She recognized the smell. Laudanum. She hated opium and its lingering effects, but she swallowed it gratefully. She only wished it had the power to wipe away the past hour and let her react with more dignity.

The curtains were drawn around the bed. Voices became dim whispers. As she waited for the drug to take effect, Damaris’s mind whirled around and around disaster.

She could not bear to face any of those people again.

Who was she, after all? For the first twenty years of her life she’d known no finer home than Birch House, Worksop. It was an adequate house for a gentleman physician like her grandfather, but nothing compared to Rothgar Abbey or even Ashart’s decrepit seat, Cheynings.

Until a year ago, in fact, she’d lived in genteel poverty, for within months of marrying her mother, her father had gone adventuring and the little he’d sent home had not allowed for luxuries. Or so Damaris had been told. She and her mother had made all their own clothes and mended them again and again. Food had been of the simplest, much of it grown in their garden. They’d had servants, but clumsy young ones, because as soon as they were trained, they left for higher wages.

But upon her mother’s death, Damaris had learned the truth. Her father had become extremely wealthy, and he’d left nearly all his fortune to her. He had even arranged for a remarkable guardian if both he and her mother died while she was young. That guardian was Lord Henry Malloren, the elderly uncle of the great Marquess of Rothgar.

That was why Damaris was at Rothgar Abbey. Lord Henry and his wife had wanted to attend and they’d had no choice but to bring their unwelcome responsibility—Damaris—with them.

Damaris had been delighted to escape Lord Henry’s dull home and to have an opportunity to learn more about the glittering aristocratic world which would soon be her own when she became Marchioness of Ashart.

How had she ever thought to reach so high?

She should have known that a person didn’t change because of fine clothes and magnificent jewels. Covering a dung heap with silk, they called it in Worksop.

She didn’t truly belong here, and she couldn’t bear to face their sniggering tomorrow. As darkness gathered in her mind, she knew she would have to leave.