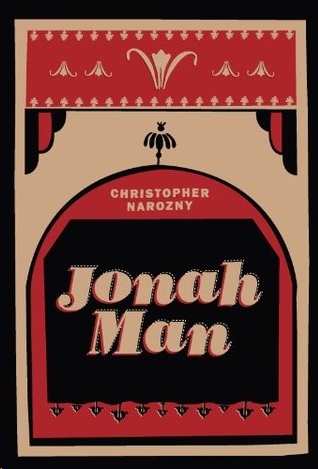 Table of Contents
Praise
Title Page
Dedication
I - SWAIN
Chicago, Illinois
Chicago to Sioux City, Iowa
Marion, California
Sioux City, Iowa
Osgood, Indiana
Twenty-Nine Palms, California
Dalkey, California
Oceanside, California
Salida, Colorado
Slant Rock, New Mexico
II - Jonson
I
II
III
IV
V
VI
VII
VIII
IX
III - Jonson’s Boy
Chapter 1
Chapter 2
Chapter 3
Chapter 4
Chapter 5
Chapter 6
Chapter 7
Chapter 8
IV - THE INSPECTOR
I
II
III
IV
V
Epilogue
Acknowledgments
Copyright Page
PRAISE FOR
JONAH MAN
“Chris Narozny has dipped his 21st-century pen into early 20th-century ink and come up with a wonder even a carney couldn’t oversell. Full of backflips, hook hands, bad drugs, busted acts and rag-tag beauties burning out before uncaring audiences under the glare of calcium lights,
Jonah Man
sings its story from deep in the throat, tells it from the gut, casts it into hard-won, hytone prose, tosses it growling and sparking onto the sticky asphalt, lets it bandy twist and barrel turn in the sizzling rain, the jaw-dropped sun.”—Laird
Hunt
, author of
Ray of the Star
and
The Impossibly
“If William Faulkner and Cormac McCarthy got together to write a novel about vaudeville, it would probably be something like Chris Narozny’s
Jonah Man
.”—Michael
Kimball
, author of
Dear Everybody
and
Us
“What can we learn from exceptionally talented orphans, one-handed, moonlighting jugglers, and inspectors who proceed by the light of accidents? A great deal indeed. In the enigmatic language of vaudeville,
Jonah Man
posits readers at the crossroads with an invitation to consider the gaps between who we have been and who we might, still, become. A remarkable achievement, this book is a dream. And like all powerful dreams, it has the power to wake you.”—Selah
Saterstrom
, author of
The Meat and Spirit Plan
and
The Pink Institution
For Nina
I
SWAIN
Chicago, Illinois
September 5, 1922
I’m in the wings, watching Jonson and his boy. Mostly I’m watching the boy. Father and son are done up in rags, dancing atop wooden barrels. It’s something everyone’s seen before and no one minds seeing again. But then a calcium light spots the boy. He shuffles faster, windmilling his arms, gathering speed before he thrusts his feet out from under him. He spins through a backflip, lands flatfooted on his barrel, still singing, still windmilling.
The audience applauds, but the boy’s barely started. He lifts himself into a handstand, taps his feet on the air above him, singing out from between his arms, upside down, sounding as good as he did right side up. People rise, whistle. Nobody can look away. The boy is a hytone note on a bill of hokum. Jonson is in the shadows now, clapping—sober, because this is a morning show.
The curtain falls and I walk along the edge of the stage, take my place on the olio. The audience is still standing for the boy. I wave my hook at them, open my valise, start both the striped and unstriped balls turning in the air. I use the curved side of my hook like the palm of a hand, get two, then three, then four balls circling in front of me. An old man in the front row stands to leave. More follow.
The pianist starts vamping in the pit. I balance a ball on the flat of my hook, keep the others going with my good hand. One by one I bring the balls to rest, one atop the other on top of my hook. I bow my head, the column holding steady at the end of my hacked arm.
Jonson greets me offstage with a Dutch-uncle sneer that says I’m a fool to keep trying. In the weeks since he joined the bill, it’s always his face watching from the wings.
Top-notch chasing, he says. Even cleared the gallery.
I set down my valise, stand so the toes of our shoes are touching. Jonson folds his arms over his dished chest.
Where would you be without your boy? I ask.
Retired, he says. He holds his laughter for a beat, then erupts in burlesque peals.

It’s what’s right, I say.
It’s what can’t happen, the manager says. The order’s the order. I bump you up, someone else is unhappy.
Since when does a fresh act get top billing?
You’ve seen the kid?
Yes.
All right, then.
But I’ve done my time. I have a good act, but it’s not a finale.
Doesn’t have to be. An audience needs something to wind them back down.

Backstage, property men pace the set with pots of glue and gilt paint, touching up the plywood throne, the receding archways and corridors stenciled on the drop. One of them peers through a part in the curtain. I walk into the wings, see Jonson’s boy
rehearsing on the olio. Jonson sits stage left in the front row, smoking a Hermosa and drinking from a tin flask. The boy stub-toe walks along the edge of the stage, then launches into a series of heel scuffs and buck breaks, turning the lip of the boards into a ledge, lurching as though he might topple forward. Each time it seems he’s gone too far, he reels himself back, pantomimes relief. It’s a balance act, designed to take control of the audience’s breathing, to make them gasp and laugh in quick succession. I glance at Jonson. He’s watching me watch his son. He smiles, nods toward the stage, raises his flask. I shift my eyes back to the boy. He’s near the center of the olio now, standing with one leg locked, ad-libbing with his active foot. There’s technique and sweat, but nothing an audience would take for effort. The manager is right. Runt letters won’t hold the boy’s name much longer.
I pick up my valise, head to my dressing room. The contortionist is seated on a wood stool, stripped to his underclothes, rubbing down his legs with a rank-smelling poultice. Twenty years of double splits and slides have left his spine scuted like a reptile’s. We’re bookends on the bill, opening and shut, something for people to look at while they walk the aisles. In the days of nickel theaters, Roy took the stage at six feet tall and ended his act coiled inside a shallow water bucket. Now he works with a trunk the size of a child’s coffin.
Kill ’em? he asks.
They ran off, I say.
He grimaces, leans back on his stool, waits for a spasm to pass. Our patter is just noise where the questions should be. How many jumps before we’re struck from the rolls? Is it all just luck and pull, or is there something we should have understood years ago? I flip through the back pages of a dated
Variety
while he wrangles into an aqua body suit. It isn’t long before the house
boy rings his bell and Roy stands.
Merde
, I say.
He nods. As he shuts the door behind him, I see he’s left the middle buttons of his suit undone.
I have time until it’s my turn again. I angle Roy’s stool under the door knob, open my day bag, lift out a spare hook and balance it on my knee. From the socket, I pull down an eye-dropper, a glass vial, a doctor’s needle. I thumb the top from the dropper, work the needle through the nipple. I transfer two beads of silver-blue liquid from vial to dropper, then put the cap back on with the syringe in place. I insert the needle beneath a nub of bone in my stump. Eyes shut, I feel a warmth spread through my body, another person’s skin enveloping my own.
Roy returns, sweating through his suit.
How’s the house? I ask.
Handcuffed.
He looks me over.
You might want to lay off, he says.
Off what?
All right, he says. Not my affair.
I wait in the wings with my back to the stage while the audience applauds the boy.
On the olio, I stare into the spot, unblinking.

My hotel room is just a bed and window with floors and walls that don’t stop the smallest sound. I shut the curtain, jostle my stub from the hook, peel off the stump sock. The flesh beneath retains an impression of the gauze. I blow the sweat dry, chafe away flecks of dead skin.
I swallow a soporific, then fall backwards onto the bed. I can’t push the boy’s act from my mind. Anyone who’s spent
time on the boards can see him inventing, testing, searching for something his body won’t do. The audience is just so many faces sloping upward. Subtract them and he’d still perform.
My pulse starts to stutter, my muscles spasm. I get up, drag the copper bed frame so it’s blocking the door, unlock my largest valise. There are trails of boric acid leading from where the bedposts used to be. The valise is packed with prosthetics—seven in all—different colors, different shaped hooks. I pick one up, slide out a glass vial. The blue is still dark, still swirling around the silver. I pull a rag from a second socket, turn it over until I find a spot that isn’t stained. I flick off the stopper, touch the vial to the rag. With my finger on the back side of the fresh stain, I rub the rag over my gums, the roof of my mouth, the underside of my tongue. I stand the vial on the floor, take up my canteen, spill a drop of vinegar into the silver-blue liquid and replace the stopper.