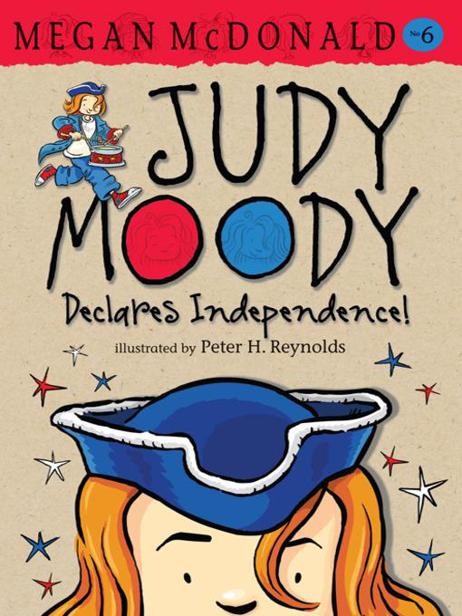 The Purse of Happiness

She, Judy Moody, was in Boston! Bean Town! As in Mas-sa-chu-setts. As in the Cradle of Liberty, Birthplace of Ben Famous Franklin and Paul Revere. Land of the Boston Tea Party and the Declaration of Independence.

Three best things about Boston so far were:

1. Freedom from two whole days of school (including one spelling test, two nights of homework, and a three-page book report)

2. Freedom from riding in the car next to Stink for ten million hours

3. Freedom from brushing hair every day

She, Judy Moody, Rider of the First Subway in America, was finally on her way to the real-and-actual Freedom Trail! The place where her country started. Where it all began.

The American Revolution! The Declaration of Independence! Freedom!

Judy and her family climbed up the stairs and out into the fresh air, heading for the information booth on Boston Common, where Dad bought a guide to the Freedom Trail.

“Did you know there used to be cows right here in this park?” asked Stink. “It says so on that sign.”

“Welcome to MOO-sa-chu-setts!” announced Judy. She cracked herself up. If Rocky or Frank Pearl were here, they’d crack up, too.

“Just think,” Judy told Stink. “Right now, this very minute, while I am about to follow in the footsteps of freedom, Mr. Todd is probably giving Class 3T a spelling test back in Virginia. Nineteen number-two pencil erasers are being chewed right this very second.”

“You’re lucky. I had to miss Backwards Shirt Day today.”

“Stink, we’re going on the
Freedom
Trail. Not the
Frog
Trail.”

“What should we do first?” asked Mom.

“We came all the way to Boston for a
tea party
?” asked Stink.

“Not that kind of tea party,” Mom said.

“The people here first came over from England,” said Dad, “because they wanted to have freedom from the king telling them what to do.”

“Dad, is this another LBS? Long Boring Story?” asked Stink.

“It’s way NOT boring, Stink,” said Judy. “It’s the beginning of our whole country. This wouldn’t even be America if it weren’t for this giant tea party they had. See, the Americans wouldn’t drink tea from over there in England. No way.”

“Not just tea,” said Mom. “The British made them pay unfair taxes on lots of things, like paper and sugar. They called it the Stamp Act and the Sugar Act. But the Americans didn’t have any say about what all the tax money would be used for.”

His Secret Heroine by Jacobs, Delle
Zombie Fighter Jango #1 The Road to Hell Is Paved With Zombies by Cedric Nye
Chasing the Star Garden: The Airship Racing Chronicles (Volume 1) by Melanie Karsak
Dream Weaver by Martin, Shirley
The Scottish Witch by Cathy Maxwell
Peter Pan Must Die by John Verdon
Dios no es bueno by Christopher Hitchens
The Mystery of the Pirate's Treasure by Penny Warner
Til Death (Jane #5) by Samantha Warren
Blue Ribbon Trail Ride by Miralee Ferrell