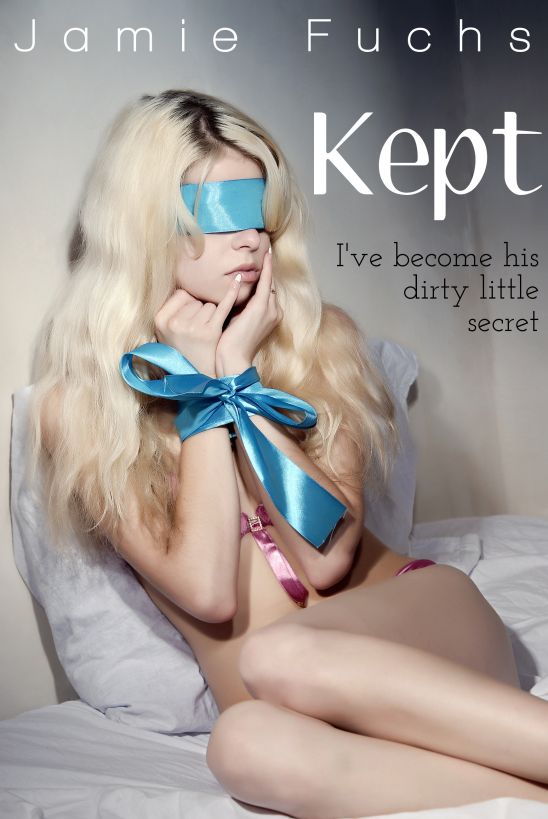 Kept
Part 1 of the Kept
serial

Other notable stories by
Jamie Fuchs:

Additionally,
all of these stories can be found at
http://www.dirtyjamie.com
,
including links to major retailers!

I waited a few
minutes before standing up and going to the shower, one of the few
pleasantries in the room. He gave no indication of when he would
come back next, he kept all the control for himself. Memories of
the weeks leading up to this point took over and I allowed myself
to indulge on them...

“Hey Casey,”
he called out the window of his car as he always did. I waved back.
He stepped out of his car and came over to have a quick chat while
I was setting up some decorations in front of my house.

“How’s school
going? I hear you’re trying to get into pre-med. That’s got to be
tough.” He asked.

“Keep at it,
nobody likes quitters. If you want it you have to take it.”

“Good.” He
turned to walk back to his well lit house. Today was Friday, that
meant he would go back inside, change out of his boring business
casual clothes and into his good stuff, then head back out.

I sat waiting,
I enjoyed watching what kind of woman he would bring home. It
helped me form a better mental picture.

Just like
clockwork there he was again, dragging another beautiful woman into
his house. Tonight it was a businesswoman. High heels, hair up,
early 30’s. Every weekend it was the same thing. He and some
beautiful woman would step out of his BMW and head straight for his
house. He’s been doing this for as long as I can remember, ever
since I was a young child. I started to get curious around the age
of 14, I’d sit outside his window and listen to what he was doing
with these women. I didn’t fully understand what was happening, but
it provoked a weird feeling inside of me that I didn’t quite
understand. That was a long time ago, now I’m a fully grown 19 year
old and know exactly what’s going on with all these women. I still
occasionally sit outside his window and listen, picturing what he
did to them as my hand would reach below my skirt.

They shut the
door behind them and I snuck around the back, quietly making my way
over to the window he always seemed to leave open. I could sit
there beneath it without being detected, but I had to be careful
not to rustle the gravel below too much.

“Sit.” I heard
him say. “Eyes closed.” I’ve never seen the inside of his house,
he’s never invited me in, but I always imagined there to be a
simple chair in the middle of a room on the other side of this
window.

“I told you to
close your eyes.” He spoke again.

“What are you
going to do to me?” The woman asked, a hint of nervousness in her
voice.

“Close them.”
He demanded once again. “Hands behind the chair.”

I could hear
his shoes clomping against the wooden floor. Picturing him walk
over to her and tying her up always got my juices started.

“So, why are
you here?” He asked in his deep voice.

“Your
reputation.” She replied.

“Good, so you
know how this works then.”

“
Hrmmmf.”
She sounded surprised through the gag on her face,
just like all the rest of them. The sound of his shoes dissipated
into the next room. He didn’t come back for a good ten minutes, I
always hated when he did this. I just wanted to get off and get on
with my night.

“What was
that? I can’t hear you.” He replied. She tried again with no
success just before the unmistakable sounds of the chair legs
shaking against the floor started, her orgasm sounding so intense.
My fingers rubbing furiously, almost pushing myself over the edge.
I had to hold back, I didn’t want him to hear me.

“You’re going
to regret that,” he said. “This way.” My imagination took over as I
pictured him leading her to the next room as she submits herself to
him. I finished letting out my final moans as quietly as I could,
afraid someone might hear me and know what I was doing.

I got back up
and snuck back to my house to shower and put on my makeup before
Sarah would show up.

“How about
this one?” I held a black dress up in front of me.

“This one?” I
held up a very seductive red dress with a low cut top that would
show a lot of leg.

“Yeah, that
one! We’ll look hot together!” I slid the tight dress up over my
body. “Yeah, love it!” She said as I looked at myself in the
mirror.

“Good, lets go
grab another drink.” I said with excitement, leading us out of my
bedroom.

“I dunno, I
hope he is so you don’t keep buggin me about him!” I smiled at her
following behind me.

I grabbed hold
of her seat from behind and pulled myself forward, “so what are you
going to do if he’s there?”

“I’m gonna
steal him before some other bitch does, but I’ll have to be
quick.”

“We’re gonna
have to get rid of her somehow, I might need you for that though.”
Sarah said with a wink.

When we got
there it was lined up as usual, but we knew the bouncers and they
loved us so we snuck around through the quiet back alley, meeting
two beefy men at the back door. When they opened the door for us
the music flooded out into the alley along with the rolling fog
they used inside. The lights shone around us as we walked through
the tables filled with people.

We leaned up
against the bar beside a well dressed man. He turned his head and
noticed us before returning his attention to his whiskey. He looked
back over a couple times before finally asking, “can I grab you two
a drink?”

“Of course!”
Sarah exclaimed with a smile.

He waved the
bartender over. “Two for the young ladies please.” He threw a
twenty down on the table and signaled for the bartender to keep the
change.

“Thanks!” We
smiled at the man before continuing around the bar.

“I don’t see
him anywhere,” I turned to Sarah. “Looks like you’re out of luck
tonight.”

“Let’s grab a
seat over there,” she pointed to a small round table with high,
classy chairs. We watched the lights flash over the people on the
dance floor.

“There!” Sarah
pointed behind me.

“What?” I
asked as I turned my head. There he was, entering the club. “Awe,
too bad. He’s got a girl with him already.”

“That’s ok,
she’s not going to be the one leaving with him.” Sarah was
determined tonight. We watched as he walked over to the bar and got
a drink. He cracked a joke before bringing her in close for a
kiss.

“What if it’s
his girlfriend?” I asked.

“Hah, you know
how he is just as well as I do.” Sarah’s eyes focused on him,
waiting for an opportunity. “Let’s get closer.” She got up and led
me to the bar next to them.

I saw the man
who bought the drink for us get up and start toward us, he smiled
as he got close, “So, are you two together?” Sarah didn’t even
acknowledge him, focus clouding her eyes.

“Oh? What does
that-” Sarah grabbed me and turned me around. She had no interest
in that man at all.

“Now!” She
whispered in my ear. The man she wanted was now alone, facing the
bar. Sarah let go of me and walked around to his other side,
leaning against the metal railing to intentionally expose her
cleavage.

“How would you
like to upgrade your lover for tonight hun?”

“An upgrade?
Hah, you can’t upgrade from a sure thing.
Hun.
” He
replied.

“I’m a sure
thing, and I’ll be much more fun than her,” Sarah responded.

“How about the
two of us then?” Sarah said, motioning to me. He turned to me with
intrigue in his eyes before turning back to Sarah.

“Both of you?
Tonight?” He asked and Sarah began nodding her head with a
grin.

“Fine. Let’s
go.” He put his drink down on the bar and walked to the exit. Sarah
grabbed my arm and followed.

“What?! You
just offered me to that guy without even asking!” I stopped
her.

“Yeah, but
he’s so hot, and you know his reputation, come on!” She pulled me
along again, out the door. We lost him in the crowd so we waited in
the archway out of the rain.

His black limo
glistened in the rain as he rolled down the tinted back window
waving for us to come. We walked over and got in before the car
drove off into the dark wet streets.

“Would you
girls like a drink?” He said as he started pouring the first glass
of champagne.

Sarah
responded with a smile, “sure!” She was clearly excited.

“Do you girls
do this often?” He asked, handing us each a glass.

“Yes.” Sarah
said looking across him to me.

“Good. I
thought you two might have been lying.” He spoke in my direction.
His hand met my thigh and I could feel my chest clench with
surprise. He took my lips into his, the stubble on his face
roughing me up as he pulled me closer. He did the same to Sarah. I
didn’t know whether to just sit there or feel him up from behind as
they kissed. I decided to just go with it, I moved closer and
untucked the side of his shirt, sliding my hand underneath to his
abs.

He leaned back
into his seat. “Kiss again, but this time like you mean it.” Sarah
wiped her lips off and leaned over him to me without hesitation,
our lips meeting in front of him once again. She pulled my head in
and started exploring my mouth with her tongue as I could feel his
hand exploring down my side. He slowly pulled my short dress up,
giving him access to everything underneath. His hands were clearly
exploring Sarah’s nether region at the same time as I could feel an
increasing pleasure in her lips as his hands moved closer to my
warmth, slowly under my panties toward my clit. The amount of
moisture between my legs surprised me as he spread my folds and
rubbed my pleasure point. Sarah started moaning in my mouth as his
fingers rubbed us.

He removed his
hand and traced my body with his fingers, moving up to the zipper
on my back, slowly undoing it.

“You girls are
probably uncomfortable in these tight dresses.” He pulled on them
to signal their removal. I took my clothes off with little
hesitation, my nervousness almost completely gone now and what
little reservations I had left were attributed to nothing but
inexperience.

Now only in
our underwear Sarah leaned over and threw her lips into mine again.
His hand exploring my back and undoing my bra, releasing my
breasts. I moved my hand to his crotch, feeling the hardness
beneath his pants.

The History of Us by Leah Stewart
Double Jeopardy by Colin Forbes
Running in Place (Mending Hearts) by Simmons, L.B.
The Fairy Tales of Hermann Hesse by Hermann Hesse
A Writer's Life by Gay Talese
Perfectible Animals: A Post Apocalyptic Technothriller (EidoGenesis Book 1) by Norwood, Thomas
Elsinore by Jerome Charyn
Alliance by Annabelle Jacobs
Chosen to Be His Little Angeline by Zoe Blake
Total Rush by Deirdre Martin