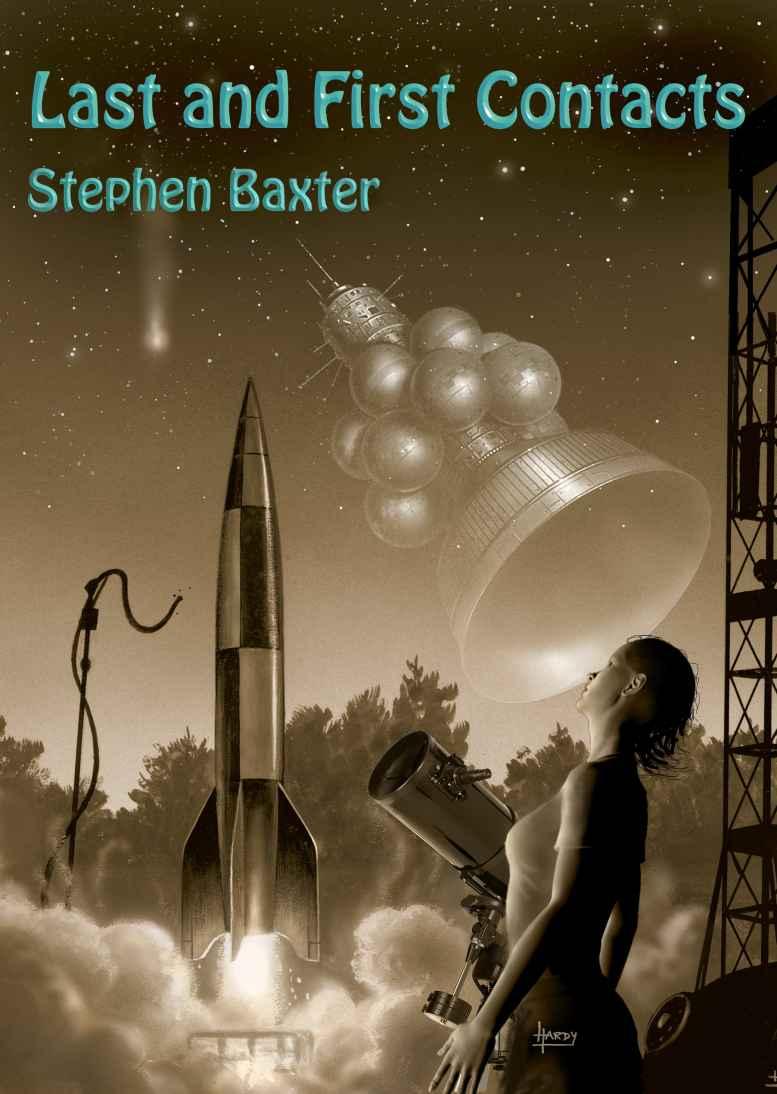 This collection copyright© 2012 by Stephen Baxter

Published by NewCon Press by arrangement with the author

All stories copyright © by Stephen Baxter

“Erstkontakt” copyright © 2012, original to this collection

“Tempest 43” copyright © 2009, originally appeared in We Think Therefore We Are, Daw Books

“The Children of Time” copyright © 2005, originally appeared in Asimov’s

“The Long Road” copyright © 2006, originally appeared in Postcripts No. 6

All rights reserved, including the right to produce this book, or portions thereof, in any form.

Cover art by David A Hardy

In Praise of Associations: An Introduction

In The Abyss of Time

The Children of Time

In Praise of Associations

Stephen Baxter is one of the most respected science fiction writers of the current age. With degrees in mathematics and engineering, it is perhaps unsurprising that his work tends to be technically convincing as well as imaginative, intelligent and, on occasion, challenging. He has been entertaining and impressing readers and critics alike for more than two decades now, and his work has won him a hatful of awards, including a John W Campbell, a brace each of Philip K Dick and Sidewise Awards and four BSFA Awards.

It seems unfeasible that anyone could produce a worthy follow-up to HG Wells’ classic “The Time Machine” but Stephen managed to do so with aplomb, and his novel
The Time Ships
remains the only authorised sequel to this seminal tale.

My first direct contact with Stephen came in 2006, when he very graciously agreed to donate a newly written story to the fund-raising anthology
Time Pieces
, NewCon Press’ very first publication. Our association, however, goes back a great deal further than that.

In the late 1980s, my first published stories appeared in a semi-pro publication called
Dream Magazine
, edited by the late Trevor Jones. I used to read the other stories in
Dream
avidly, in no small part to see how my own efforts matched up. On the whole, I thought they more than did so, but there was one contributor who genuinely annoyed me, because his pieces were
so
good, displaying an understanding of technical issues that I simply didn’t possess.

I’ve just taken down my battered copy of
Dream Magazine
#14 (November 1987) from the shelf. The closing story in the issue is “A Flash of Lightning” by I.G. Whates (my third ever sale); the opening piece is “The Bark Spaceship” by S.M. Baxter, the author in question.

I had no idea who S.M. Baxter was, but I suspected even then that this individual might be destined for greater things. As a science fiction writer, it’s always gratifying when one of your predictions comes true…

Stephen Baxter has continued to dazzle; whether with his far-reaching Xeelee sequence, the mind-bogglingly magnificent Manifold series, his YA masterpiece
The H-Bomb Girl
(one of several titles that have been shortlisted for the Arthur C Clarke Award), or his near future global disaster sequence,
Flood
and
Ark
. He has collaborated with both Arthur C Clarke and Terry Pratchett, and is involved in the SETI project. Throughout all this, he has continued to produce some of the most thought-provoking and memorable short fiction around; which is why Stephen was one of the first authors I approached regarding the Imaginings project (speaking to him as he was in London, about to board a plane for the US where he would link up with a certain T Pratchett). Needless to say, I was delighted when he agreed to participate.

All of the above perhaps intimates but doesn’t specify one further fact about Stephen Baxter that is worth noting: in addition to being an exceptional writer, he is good company and a genuinely nice man.

Here then, is
Imaginings 2: Last and First Contacts
; a collection of stories personally selected and organised by Stephen Baxter. What could be better?

During her time at Peenemünde, Dorothea only spoke to Wernher von Braun once.

Oh, everybody knew who he was. You saw him around, and the draftswomen and the secretaries in their great dormitories would speculate about the tall, upright young fellow, so different from the older, rather odd-looking senior scientists and engineers around him, as at ease with the humblest of staff as with the Party leaders who frequently visited the research centre. Even the foreign workers in their ugly fenced-off barrack at Trassenheide probably worshipped him, the girls imagined.

But von Braun was SS. You always had to remember that. And when Father Kopleck, the centre’s chaplain, called to say that von Braun wanted to see her in his office, Dorothea’s heart fluttered with dread.

That bright day in October 1942 had already been an auspicious one, for that afternoon the Aggregat 4 rocket that was going to win the war for Hitler had made its first successful test flight. When the firing was due everybody had gone out to see, crowding in the parking lots and on the rooftops; you worked ferociously hard here, but you couldn’t miss such a moment. Well, the lathe operators had flirted with the typists, and everybody laid bets about how long the ship would last before it blew up this time. From Dorothea’s office block she couldn’t even see Test Stand Seven, a concrete platform near the northern shore of the peninsula.

But you couldn’t miss the A4 itself when it went up, a droplet of liquid light rising straight up out of a bank of pine trees and into the sky, trailing white smoke. Dorothea was struck by the sheer verticality of it, compared to the horizontal lines of the landscape, the green of pine forest and marsh. She saw ducks flapping off to the west out of the rocket’s way.

And then the noise of it reached her ears, a thundering, crackling roar. The rocket punched through a layer of cloud and kept on climbing, arcing out over the Baltic.

Everybody cheered, and went back to work.

And not a couple of hours later, before the end of the shift, Father Kopleck came to find Dorothea, and said she had been summoned to the presence of Doctor von Braun, to talk about her comet.

Von Braun’s office was in one of the grander houses in the senior staff accommodation quarter. This area was like a university campus, with two-storey buildings set around squares of green, and a sports ground, and young people riding bicycles. It was quite a contrast to the horrible warehouse-like block where Dorothea had to sleep, along with thousands of other young women. But even here guards patrolled with dogs.

They were met at the door by a young officer in the black uniform of the SS, who checked the identity cards pinned to their clothes, the priest’s black jacket and Dorothea’s woollen cardigan. Dorothea felt a thrill of terror and excitement; the SS were so glamorous, so terrible. But the officer was very handsome, and he smiled at her. ‘I am Lieutenant Bergher. My name is Adam. You have nothing to fear from Doctor von Braun. He is even more charming than I am.’

The priest, about forty, a local man, sensible and good-humoured, arched an eyebrow at that sally, but said nothing.

Bergher escorted them into the house and led them along a corridor panelled with polished wood to an expansive office. Here von Braun sat behind a desk as wide as the Baltic, littered with papers, blueprints, trajectory diagrams and scribbled notes. He stood to greet them. ‘Fraulein Rau, and Father –’

‘Indeed.’ He shook the priest’s hand, then took Dorothea’s hand, quite gently, and bowed. In a snappy civilian suit, he really was tall, handsome, cultured; he was thirty years old, some eight years older than Dorothea. ‘Please sit. Forgive the litter. The results of the test flight are only just coming in.’

‘I saw it, sir,’ Dorothea said, sitting down primly before the desk.

‘Spectacular, wasn’t it? A success in every aspect. At last we have something to show the Fuhrer! And now the hard work begins, as we prepare the missile for mass production. But we changed the timing of the test, you know, Fraulein Rau. Because of you.’

To have such significance suddenly thrust upon her was frightening. ‘Why? Not because of my comet, surely?’

‘Exactly because of your comet, yes.’

She failed to understand.

‘I must share the blame,’ Father Kopleck said gently. ‘You may know that I grew up here, on the peninsula, Doctor von Braun. When the engineers came – well, the fishing villages were demolished, and the families moved on, with handsome enough compensation. But I stayed on.’

‘That was my instinct. It came to my attention that Fraulein Rau here had an interest in astronomy.’

‘Only minor,’ Dorothea said, hoping she wasn’t blushing. ‘But I brought with me the little telescope my father once bought for me. I hoped the seeing would be better than in Munich.’

‘So I showed the Fraulein the beaches on the north coast. Where I knew from my own boyhood memories that the view of the starry sky is unimpeded and spectacular, on a clear night.’

‘It was all approved,’ Dorothea said quickly, to this SS man. ‘I gained permission from my supervisor.’

‘As did I,’ said the priest dryly.

Von Braun glanced at a file. ‘You work in operations, Fraulein. The tedious but essential work of documenting material flows and manpower allocations, eh? And yet you are evidently a capable astronomer. Well, it’s no surprise. We have selected everybody we could for some element of an academic background. Even clerks such as yourself. Even Adam there! The more intelligence is focussed on our huge task at all levels, the more chance it has of success. And so, Fraulein astronomer, on that beach you observed your comet.’