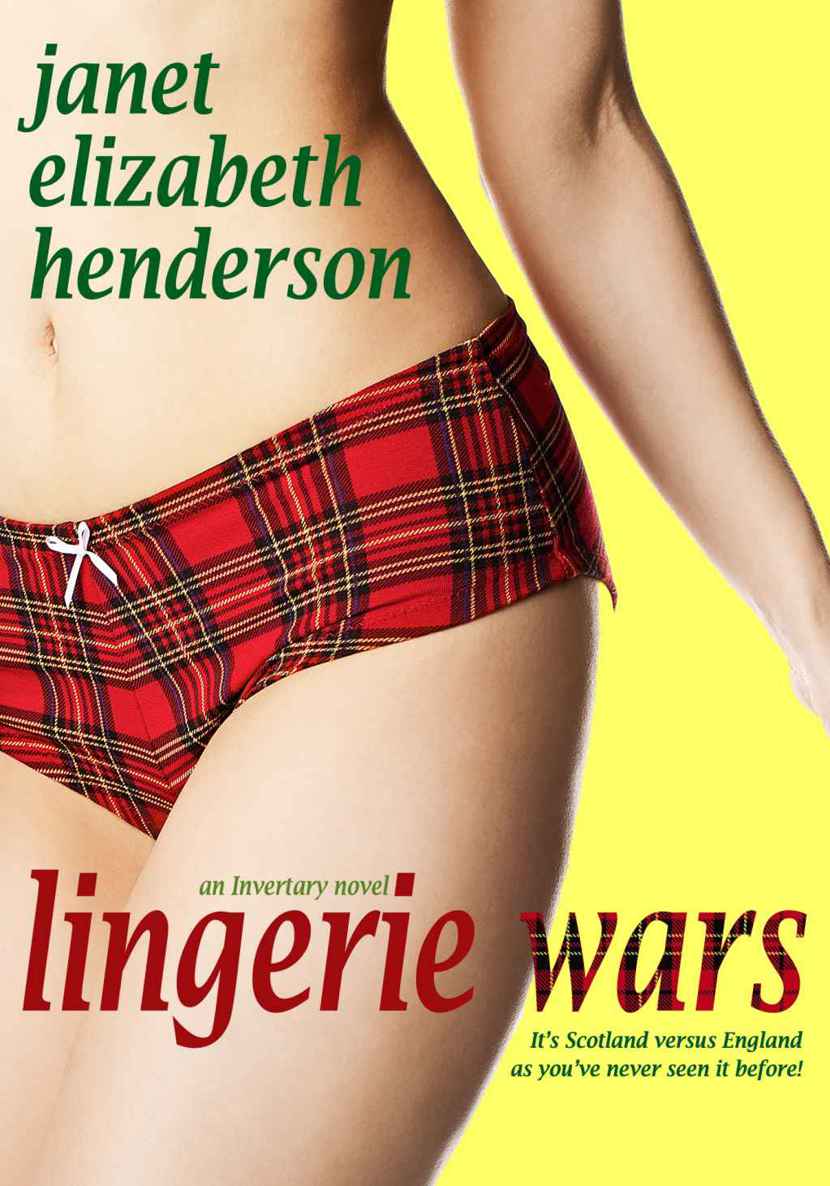 Lake Benson's midlife crisis lasted exactly twenty-four hours. In that time he quit his career with the army and bought a lingerie shop. All things considered, he was glad the crisis hadn't lasted longer.

"I told you," whined his little sister. "I can do this myself. I have a business plan. You're only interfering because you're bored and don't know what to do with yourself."

"That's not the point," Lake told her as he looked up at the sign on the front of the shop. "The point is, you obviously need my help. You're haemorrhaging money.
My
money."

He hadn't even set foot inside the shop and already he could see a problem.

Rainne twisted a strand of her long hair, a dead giveaway that he wasn't getting the whole story.

Lake folded his arms tight across his chest. Heritage his hairy backside.

"You also didn't tell me how isolated this place is," he said.

"It's busy during the tourist season—you know, summer."

For Scotland that was about two weeks in August.

"And you neglected to mention that we have competition."

He cocked his head towards the lingerie shop, which sat opposite them on the high street. Unlike the shop that had eaten all of his money, the one over the road actually looked like people would buy lingerie in it.

"Ah, yeah," his sister said as she toed the pavement with her pink Doc Marten boot. "But Kirsty's shop has a different clientele than ours."

"One that buys underwear?"

She missed the sarcasm.

He was about to tell his sister that she was talking rubbish when the shop door flew open and a tiny cube of a woman hobbled out. Lake guessed her age to be close to two hundred.

"You," she said as she pointed at him. "What are you and why are you here?"

Rainne shrank beside him. Her face shot past pink and straight to purple.
Here it comes
, thought Lake,
the catch
. Every time he got involved with his family there was a catch.

"I'm Lake Benson," he told the Hobbit. "I own this business."

The woman's eyes narrowed under eyebrows that were hairier than her head.

"Rainne girl," she said, but she kept her eyes on Lake. "I thought I sold my business to you."

His sister shuffled on the spot, making all the tiny bells sewn into the bottom of her tie-dye skirt jingle.

"I've been watching," the woman said. "He's doing an awful lot of talking for a man who's supposed to be silent."

Before Rainne could answer, the woman jabbed her finger in Lake's belly. She seemed surprised when it bounced back off him.

"What do you know about underwear, boy?" she demanded.

Lake stared at the woman calmly. He'd been face to face with drug lords and terrorists. There was no way a little Scottish woman could intimidate him. Amuse him, maybe—if the bulk of his savings weren't tied up in the joke.

"I know how to unhook a bra in two seconds flat," he said.

"If I was sixty years younger, boy, that might impress me. Right now, I'm just wondering why you're blocking the customers from getting into my shop."

Lake took a slow look around him. He saw a cobbled road, a row of crooked old houses that had been whitewashed and turned into shops and a loch at the bottom of the street. He didn't see any people. Let alone hoards queuing up to buy underwear.

"Yeah, I can see how I'm getting in the way," he drawled.

Rainne started to inch away from him. He got the distinct impression that she was on the verge of running. Lake reached out, grabbed her vintage velvet jacket and hauled her back to stand beside him.

"What do you mean
your
shop?" he asked the Hobbit.

The old woman pulled herself up to her full height, which must have been all of four foot six.

"And I bought the business six months ago."

"It's still my shop, son." The woman tried to fold her arms over her ample belly as she glared at him.

If he were prone to dramatic gestures, he'd have rolled his eyes. Instead he kept his face as expressionless as usual.

"Rainne, want to explain this to me?"

His sister looked like she'd rather eat dirt. Lake didn't care. He'd driven up the length of England, through Scotland and into the Highlands. He was tired. He was hungry. And he was wondering what insanity had made him think managing a shop would be good for Rainne. Most of all, he'd run out of patience.

"Okay, okay." She held up her hands in surrender. "In the contract I signed, there were some unusual clauses." She cleared her throat as Lake's heart sank. "The business is ours to do what we want with, but Betty here stays—think of her as an underwear mascot."

He looked at Betty, who gave him a toothless grin. In her ankle-length tartan tent, cable knit jumper and hairnet, she oozed sex appeal.

His sister took a deep breath.

They all looked at the sign. There was silence.

"It could be worse," Rainne mumbled.

"So, let me get this right," he said at last. "I bought a lingerie shop in a town in the middle of nowhere. I have my very own underwear mascot. The main competition is the shop facing us, which actually appears to have customers. And to top it all off, the first business I've ever owned is called Betty's Knicker Emporium."

Betty grinned with pride as Rainne tried to appear invisible.

"I need a beer," Lake told them and headed towards the local pub.

"There's trouble brewing over the road," Magenta said by way of hello.

It took Kirsty a minute to focus on her employee. Her brain was still frozen from studying her bank account details.

Kirsty snapped the laptop shut, aware that the same grim set of numbers would be there to greet her when she opened it again.

"Poor Rainne, I should have made more of an effort to help her out."

"You've been up to your eyeballs keeping this place afloat."

"You're not wrong there," Kirsty said on a sigh. "But still, I did tell her we could coordinate window displays and advertise together. We just never seemed to get round to it. I hope her brother didn't give her a hard time. Did it look like he was mad?"

"I didn't see him. I saw the aftermath. So I'm guessing he was mad. Wouldn't you be if your life savings bought Betty's Knicker Emporium?"

"I'd be happy just to have access to my savings, so I could waste it on whatever I chose to."

"Sorry, that was insensitive."

Kirsty waved her words away with a flick of her hand. It was old news. Literally. She had the newspaper headlines to prove it. She went to join Magenta at the window. Sure enough, there was Rainne, looking like she'd been exiled from a hippy commune and didn't know what to do with herself. Her shoulders drooped, her eyes were dark and her skin almost as pale as Magenta's—and that was saying a lot considering Magenta's white goth makeup.

"Why bother?" Magenta said. "All she's going to do is whine and whimper. Look at her. I can't understand how she stays upright when she doesn't have a backbone."

"Magenta!" Kirsty said, giving her young friend a look heavy with meaning. "That's harsh. She's struggling. Running a business is hard enough without having to deal with Betty too."

Kirsty's heart broke for Rainne; she looked every bit as lost as Kirsty felt. Magenta frowned.

"It's eat or be eaten out there," she told Kirsty. "And that girl has 'tasty snack' tattooed to her forehead."

"Remind me to tell the town council never to let you volunteer for the Samaritan help line. I can hear you now: 'Stop whinging about your life, suck it up and get on with things.'"

Magenta gave Kirsty a rare grin. Kirsty couldn't help smiling back as she went out to talk to Rainne. She felt the crunch of autumn leaves underfoot as she trotted across the road towards Betty's place. The old underwear shop had been an Invertary institution as long as she could remember. She'd been dragged there as a child to get her first bra, and later she'd suffered the humiliation of being present while her mother bought a girdle. She smiled at the memory. The only problem with Betty's Knicker Emporium was that it was about four hundred years out of date. Well, that and Betty. Betty was a big problem.

"You okay?" she asked Rainne.

"Tell the truth, girl," Betty said as she elbowed Rainne in the side.

Rainne was too polite, or too scared, to tell the old woman off. Kirsty wasn't—it was one of the perks of being a local.

"Cut it out, Betty," she told her. "Or I'll tell the vicar that you're bullying again."

"What's going on?" Kirsty asked Rainne. "Is your brother shutting you down?"

They ignored her. Rainne hung her head and looked dejected.

"Really, he can do whatever he likes—it's his money. I shouldn't have borrowed it. I don't know anything about running a business. I don't know what I was thinking."

Kirsty couldn't have agreed more, but didn't think it was the time to tell her.

"You have some good ideas," she said to be encouraging.

"Yes," Rainne sighed sadly, "only I can't implement them."

The two women stared at Betty.

"What?" Betty demanded. "I have veto. It's in the contract."

"That was some contract you had drawn up," Kirsty told her.

"You're not wrong." Betty grinned. "I never thought anyone would sign it."

"There's a neon sign above my head with the word idiot and an arrow pointing at me, isn't there?"

"No, of course not," Kirsty said while Betty nodded.

"This is your last warning," Kirsty told Betty.

Betty stalked back into the shop in a huff.

"I don't know how you do that," Rainne said as they watched the shop door slam. "I can't seem to stand up to her at all."

The Substitute Bride (The Great Wedding Giveaway Series Book 7) by Kathleen O"Brien
Broken Chord by Margaret Moore
Shattered by Kia DuPree
The World as I See It by Albert Einstein
The Whole Truth by David Baldacci
The Truth Machine by Geoffrey C. Bunn
Cowboy Wisdom by Denis Boyles
The Lord Son's Travels by Emma Mickley
The Arx by Storey, Jay Allan
St. Lucy's Home for Girls Raised by Wolves by Karen Russell