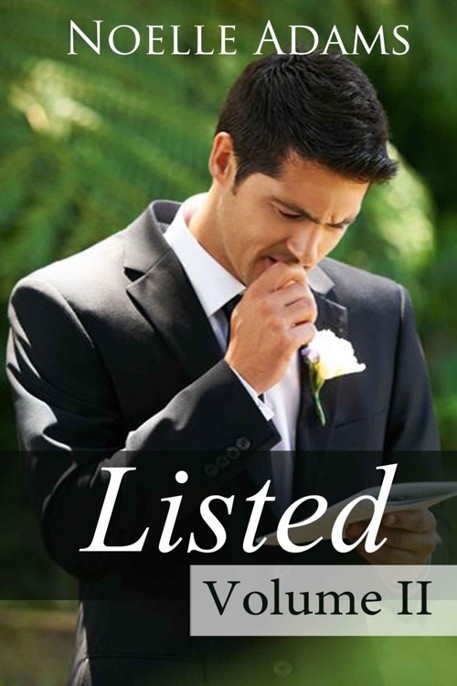 This book is a
work of fiction. Names, characters, places, and incidents are the product of
the author’s imagination or are used fictitiously. Any resemblance to actual events,
locales, or persons, living or dead, is coincidental.

Copyright © 2013
by Noelle Adams. All rights reserved, including the right to reproduce,
distribute, or transmit in any form or by any means.

The author
acknowledges the trademarked status and trademark owners of the following
wordmarks referenced in this work of fiction: Tylenol, Advil, Tiffany &
Co., and Jeep.

He’d
had four cups already this morning, but he’d gotten up just after four o'clock,
run on the treadmill, showered, dressed, and had been working in his study for
four hours.

His
old friends wouldn’t recognize him. Sometimes, he couldn’t even recognize
himself.

Not
too long ago, he’d been in the habit of sleeping late, often until noon. Ever since
his mother died, though, he’d been waking up earlier and earlier, compelled by
some unstoppable need to move, to act, to
do
.

He’d
only been at his job a week, but he’d already fallen behind because of the wedding
and the deposition. He knew the board had him on a very short leash, and he was
determined to prove himself, for once in his life.

So,
after they’d wrapped up the deposition in the early afternoon yesterday, Paul
spent several hours catching up while Emily rested, and then he’d woken up
early today and had managed to get through all the tasks and messages that had
piled up in his inbox.

Paul
felt better without the weight of all that work pressing down on him. So far,
the board could have no reason to complain about his performance.

As
soon as he opened the door of his home office, he was greeted to a warm,
familiar scent. He followed it down the hall toward the kitchen, sniffing the
air like a rapt bloodhound.

He
found Emily at the end of his search.

She
sat on folded legs on a stool at the kitchen bar, leaning in a relaxed sprawl
on the black granite countertop and focused intently on her smart phone. Her
fingers curved loosely around a mug of coffee.

She
was probably texting Chris again. She’d talked to him on the phone more than
two hours the previous evening. Paul knew because he’d heard her talking to the
boy in the media room when he passed by at eight in the evening, and she was
still on the phone with him when Paul got up to stretch his legs again at ten
o’clock.

Paul
doubted Emily would have enough to say to
him
for that long.

“Hey,”
she said, smiling brightly when she glanced up and saw him standing there. “I’m
making cinnamon rolls!”

“I
can smell them.” He wandered into the kitchen toward the coffee maker. “I’m
very impressed by your culinary energies.”

“Don’t
be too impressed. They’re just the pop-out-and-bake kind.”

“Ah,”
he murmured, pouring fresh coffee into his mug. “Then I’m less impressed.”

“Well,
they still taste good. And I went through the trouble of asking Ruth to buy
them for me yesterday. Then I popped them out, put them on the tray, and stuck
them in the oven—which is more culinary energy than
you
exerted this
morning, Mr. Boring-Protein-Bar-with-his-Coffee.”

He
chuckled at her choice of words and tried to peer into one of the ovens to see
how far along the cinnamon rolls were.

“So
you don’t have to pooh-pooh my efforts.” She’d gotten up and walked around the
bar to pour herself more coffee too, but she gave him a decidedly peeved look
over her shoulder.

“I
wouldn’t dream of pooh-poohing your efforts.” He tried to suppress a smile as
he reached into the refrigerator for the half-and-half and handed it to her.
“I’ve never had the pop-out kind before, but they smell good.”

After
doctoring her coffee, Emily leaned back against the counter, holding her mug
with both hands. She closed her eyes and took a deep breath, pleasure evident
on her face. “I love that smell.”

He
stared at her silently for a moment as he sipped his coffee, wondering how she
managed to so genuinely enjoy herself—enjoy such little things—when tragedy had
struck her so hard, when the shadows had closed in around her so ruthlessly.

He’d
understood her the other night when they’d talked in the car after their trip
to the lake. He’d known exactly what she was feeling, since he’d felt those
shadows before too.

He
knew he wouldn’t have been able to handle circumstances like Emily’s with such
courage and resilience. If he’d been told he had so little time to live, he was
pretty sure he would drink himself into a three-month-long stupor or maybe just
shoot himself.

He
understood Emily’s shadows, but he didn’t understand how she was managing to
hold them back.

He
had his own shadows. His father was waiting for trial, and Paul would have to
testify against him. Even with his intense focus on his new job and his
responsibilities with Emily, Paul could barely manage to hold those shadows
back.

After
a moment, Emily opened her eyes again and caught him staring at her. She gave
him an impatient frown, the one he was starting to recognize as her thinking he
was feeling sorry for her.

Her
annoyance was fleeting, and she stepped over to check on the rolls, peeking
into the oven after she’d opened the door an inch. “They’re starting to puff
up,” she informed him, as if he’d been waiting for this update. “But they still
have a few more minutes.”

Since
he had time to kill, he went over to the entry table and got the three
newspapers that were delivered to the apartment every morning. His mother had
always had daily subscriptions, and Paul couldn’t bring himself to cancel them,
even though he almost always read the news online.

Emily
had sat down again, but as he returned he caught her scanning him from his head
to bare feet with a little sneer.

“What?”
he asked, genuinely baffled by her apparent disapproval of how he looked. Since
he wasn’t going anywhere this morning, he hadn’t thought much about his
appearance, but he seemed to be basically presentable in khakis and a black
t-shirt.

She
gave him a disdainful sniff. “Do you always have to look so nice and pulled
together, even first thing in the morning?”

Paul’s
eyes widened in surprise. He wasn’t dressed up. His trousers were slightly
wrinkled and he wasn’t wearing shoes.

Evidently
recognizing his astonishment, Emily explained, “I’ve never seen you sloppy.
Don’t you ever just hang around in your pajamas?”

Sometimes
he did, but Paul had made a point of not doing so when Emily was around. It
didn’t seem quite right to lounge around half-dressed with a dying,
seventeen-year-old girl in the house.

Emily
evidently had no such qualms. This morning, she was wearing what she’d
obviously slept in—a little black tank-top and gray, cotton pajama pants. She
was barefoot, and her hair looked unbrushed, hanging around her shoulders in
messy waves, almost red-gold in the morning light.

It
made Paul a little uncomfortable to have Emily looking so much like she’d just
rolled out of bed, but he didn’t have the heart to ask her to not go around so
under-dressed. She should be able to feel at home here.

He
just had to make sure not to look at her too closely.

When
he saw her eyeing him strangely, he realized he’d never answered her question.
“It’s not first thing in the morning for me,” he explained, shifting the
conversation to something more impersonal. “I’ve been up since four.”

He
gave a huff of laughter, took the newspapers to the bar, and sat down on the
stool next to her. “I haven’t been able to sleep in lately, for some reason,
and I’ve found I can get a lot of work done in those early hours of the
morning.”

“Did
I make you really behind at your job?” she asked, a flicker of concern in her
eyes.

“Are
you sure? If you need to work, just tell me. I know you’re just starting out in
this position, and they might be looking over your shoulder all the time. You
really don’t have to do all the stuff on my list with me. It’s really okay if
you—”

“Emily,
stop,” he interrupted, a little sharply. “I’ll tell you if I’m too busy.”

She
frowned at his tone. “Okay. I just worry. I don’t like to be a nuisance. Are
they really dumping all their unwanted projects on you?”

“Yes.
Some of this stuff has been sitting on other people’s desks for months, and now
they have someone to give it to.” He heard an edge of bitterness in his tone,
so he tried to temper it—not wanting to sound like he was whining.

“What
kind of work is it? Just stupid, tedious stuff?”

“No.
Well, yeah, there is some tedious stuff, but my position is too high on the
food chain to waste on entry-level work. I’m getting all of these no-win
projects—the stuff everyone knows is going nowhere good and so no one wants to
take on. Like the reorganization of one of the departments.”

“What’s
so hard about that?”

“I
don’t see how it can be done without firing a third of the personnel. I’m sure
no one else can figure out how either, which is why they stuck me with it.”

For
some reason, her sympathy was comforting. “Yeah.”

“Well,
I’m sure you can think of some creative way to do it and not fire all those
people. They might think it’s a no-win project, but they don’t know how
brilliant you are.”

He
snorted, although he was rather pleased by the off-hand compliment. “You have
no evidence of said brilliance.”

“Are
you kidding me? You graduated from the Ivy Leagues and then got your MBA
without ever slowing down your partying and crazy adventure sports. There’s no
way you could have done that if you weren’t naturally brilliant. If you keep
working as hard as you have this week, you’ll figure out all of those projects.
They’ll see you aren’t the reckless kid they think. Everyone will be awed by
you.” She patted his arm in a casually supportive gesture.

He
felt strangely self-conscious and looked down at the front page of the
newspaper. “You’re pretty good at the supportive-wife act for just being
married a week.”

She
giggled. “I must be naturally talented at it.”

They
smiled at each other, and Paul had the oddest sensation of being heard.

Emily
gasped and jerked upright. “The cinnamon rolls!” she squeaked, scrambling off
the stool and running over to the oven. She grabbed a hot pad and pulled the
tray out, dropping it on the counter.

“Are
they all right?” he asked, leaning over to get a look at how well-done the
rolls had ended up.

“Yeah,”
she said, relief evident in her tone, “They’re not burned. Just a little
browner than I usually make them.”

She
already seemed to know her way around the kitchen, since she easily found a big
plate and two knives. She grabbed each hot cinnamon roll between her finger and
thumb and quickly dropped them over onto the plate.

“You
should wait until they cool down a little,” he said, when she blew on her
fingers.

She
frowned. “They need to be iced while they’re hot.”

“Of
course, there’s icing!” She brought the plate over to the bar and, after
picking up a little tub of white icing, she handed him a knife.