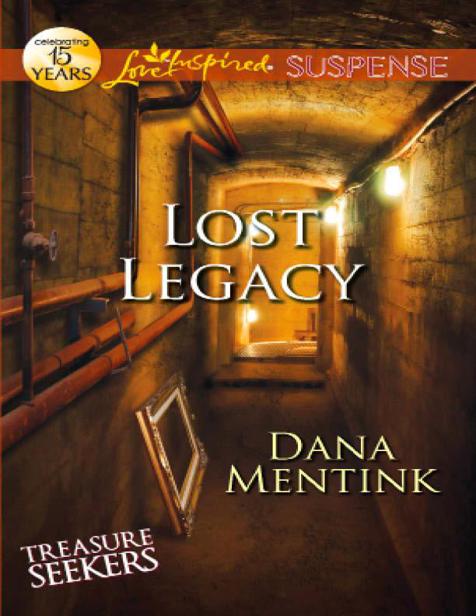 Brooke Ramsey is running out of time. She needs to save her father’s reputation before she loses him to illness. That means finding the painting that went missing while in his care. Fast. Which is why she teams up with Victor Gage, owner of Treasure Seekers agency.

The charming private detective has more at stake than uncovering a lost masterpiece. He’s investigating his wife’s death, and the artwork holds the answer. As Victor and Brooke draw closer to each other, so does a murderer. Someone wants the past to remain buried and will kill again to keep it hidden.

“Why don’t you tell me the truth?”

Brooke started. “I am telling you the truth.”

“Not all of it,” Victor said. “I can see in your face there’s something you don’t want me to know.”

“I thought you were a heart surgeon, not a psychiatrist.”

He laughed. “Good research on your part, but I’m also pretty skilled at reading faces.” Truth was, he did not understand why he had the feeling he knew her. He kept his voice low and soft, but he could see she caught the intensity anyway. “So go ahead and tell me. You want to find the painting because it belongs to your father. What’s the other reason that brought you here?”

She took a deep breath and straightened, looking somehow more vulnerable. Vulnerable, small and scared. “I came to you because I believe you are the only person who can help me find that painting. And…”

“And I think someone is…”

Her voice dropped, so he had to lean closer to hear.

lives in California, where the weather is golden and the cheese is divine. Her family includes two girls (affectionately nicknamed Yogi and Boo Boo). Papa Bear works for the fire department; he met Dana doing a dinner theater production of
The Velveteen Rabbit.
Ironically, their parts were husband and wife.

Dana is a 2009 American Christian Fiction Writers Book of the Year finalist for romantic suspense and an award winner in the Pacific Northwest Writers Literary Contest. Her novel
Betrayal in the Badlands
won a 2010
RT Book Reviews
Reviewer’s Choice Award. She has enjoyed writing a mystery series for Barbour Books and more than ten novels to date for Harlequin’s Love Inspired Suspense line.

She spent her college years competing in speech and debate tournaments all around the country. Besides writing, she busies herself teaching elementary school and reviewing books for her blog. Mostly, she loves to be home with her family, including a dog with social anxiety problems, a chubby box turtle and a quirky parakeet.

Dana loves to hear from her readers via her website at www.danamentink.com.

Guard, through the Holy Spirit who dwells in us, the treasure which has been entrusted to you.

To my faithful readers who have come along with me for this Treasure Seekers series. You inspire me to make each book better than the last.

V
ictor Gage saw beneath the determined expression that Brooke Ramsey was hiding something. Although her red hair and splash of freckles lent her an impish quality, she was deadly serious at the moment.

She lifted her chin, her hands clasped together tightly. “Dr. Gage…”

“Please call me Victor. I haven’t been a practicing surgeon for four years.” He still felt the familiar twinge when he said it out loud. Though he smiled gently at her, she did not respond. Something about her seemed familiar.

Her words were measured and calm, but there was a strong current of emotion throbbing underneath. “I want to hire you to find a treasure.”

He raised an eyebrow. “Why me?”

She glanced around the richly appointed office. “Because Treasure Seekers is your agency.” She crossed her legs, long and lean, a dancer’s body. “You’ve found things for people before. Yours is the only business in California that does this kind of work, I’ve heard.”

“True, but we’re not really a public agency. We are very selective. The cases we’ve taken on were strictly through private recommendation. Friends of friends generally. I’m surprised you’ve even heard about us.”

“You found that Vermeer six months ago. You’re the only one who can help us,” she said.

For Victor the thrill came in unearthing the treasure, not the publicity that inevitably followed, but the Vermeer had made international headlines in spite of his refusal to be interviewed. “Us?”

He cocked his head. “There are plenty of good detective agencies you could go with. Why am I the only one?”

She shifted in the chair. “You have connections to Bayside College. Your family funded some buildings there.”

He hid his surprise. She’d done some homework, just as he would have before a meeting like this. “My father did, yes.”

Stephanie Gage slipped into the room and joined them. Victor introduced his sister. He watched Brooke’s reaction to Stephanie’s frank stare. Brooke’s gaze lingered on the scar that crossed his sister’s cheekbone. “Stephanie is working on another case right now. She’s a computer genius among other things,” Victor said. “My brother, Luca, is also a partner in this firm, but he’s traveling at the moment.”

Brooke eyed the two of them. “I can see the resemblance.”

“Working with big brothers can have advantages and disadvantages,” Stephanie said, with a wry look at Victor. “Have you got siblings, Ms. Ramsey?”

“Just a brother but he’s…away.”

Stephanie gave Brooke a friendly nod before turning to Victor. “Luca is going to be tied up for another two days.” Her gaze flicked to Brooke and back again. “He said not to get into any messes while he’s gone, but I think he might have meant that more for me than you.”

Victor laughed. “Ms. Ramsey was just telling me that she needs access to Bayside College, but she hasn’t told me why.”

Brooke breathed deeply before she answered. “There is a tunnel system under the college. It’s been there since the place was built in the 1930s. I have reason to believe there’s a treasure hidden there, which I need to recover quickly.”

She raised her chin a fraction. “A painting that belongs to my father.”

“What kind of painting?”

She stared at him, and he could see her weighing whether or not to trust him. “It’s a Tarkenton.”

He didn’t answer for a moment. “A Tarkenton? As in a work by L. Tarkenton?”

Considering he’d recently read about a Tarkenton fetching twenty million dollars at auction, it would be a treasure indeed. “How did your father wind up with it?”

Her eyes flicked away from his. “That’s not important. The point is, I know where it is.”

He considered, pulse quickening at the enticing possibility. She could be wrong. Barring that, her father could have obtained the painting illegally. The possibility that a work of art was tucked in the tunnels under Bayside College was beyond far-fetched. “That’s certainly quite a prize, but we don’t work for the payoff. We’re all well established. I think you need an art historian, not the three of us. We couldn’t authenticate it, even if we found the piece.”

“I am an art historian, unofficially anyway. Look, I know you’re not in it for the payoff and neither am I. The painting belongs to my father and he’s…” She swallowed. “Never mind the details. My father had it sent to a professor at the college for examination, a man named Leo Colda, and it disappeared while in his possession.”

Stephanie cocked her head. “Hang on. This rings a bell. Colda disappeared, too, didn’t he?”

Brooke nodded. “He was last seen exiting the steam tunnels a month ago. I need to recover the painting. Time is running out. They’re closing down the college next term for a massive remodel and if I don’t find the painting soon it will be destroyed.” She bit her lip and looked at her lap.

He watched her cheeks flush, the curse of a fair, freckle-faced redhead. He got the impression there was something much more than treasure at stake. After giving her a moment to recover herself, he asked, “Why don’t you tell me the truth?”

She started. “I am telling you the truth.”

“Not all of it. I can see in your face there’s something you don’t want me to know.”

“I thought you were a heart surgeon, not a psychiatrist.”

He laughed. “Good research on your part, but I’m also pretty skilled at reading faces.” Truth was, he did not understand why he was so intrigued by this particular face, why he had the feeling he knew her. He kept his voice low and soft, but he could see she caught the intensity anyway. “So go ahead and tell me. You want to find the painting because it belongs to your father. What’s the other reason that brought you here?”

She took a deep breath and straightened, looking somehow more vulnerable since she’d taken off her jacket. Vulnerable, small and scared. “I came to you because I believe you are the only people who can help me find that painting. And…”

“And I think someone is…”