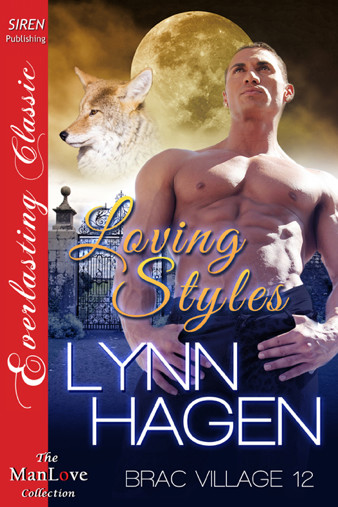 Styles hates wolves with a passion. They have been nothing but trouble to him since he was a small pup. It was wolves who killed his parents. It was wolves who messed with him in his young adult life. So when fate decides to give Styles a wolf for a mate, he finds himself at a crossroad, uncertain of which road to take.

Robby Nobles is determined to make Styles his. He knows about the coyote's tragic past, but he isn’t going to let that stand in his way of going after what is his. The harder Styles pushes him away, the harder Robby fights to get near the man. Loving Styles is easy, but getting the man to tear down his walls is proving tough.

When someone breaks into Robby's house, trashing the place, Styles agrees to let Robby stay the night. He swore that all wolves were his mortal enemy, until Robby touches a place Styles thought long dead.

All art and logo copyright © 2013 by Siren Publishing, Inc.

If you have purchased this copy of
Loving Styles
by Lynn Hagen from BookStrand.com or its official distributors, thank you. Also, thank you for not sharing your copy of this book.

This is Lynn Hagen’s livelihood. It’s fair and simple. Please respect Ms. Hagen’s right to earn a living from her work.

“Are you serious?” Styles threw his head back and laughed. “I’ve never heard of a man that persistent.”

Reese chuckled. “No shit. It seemed every time my back was turned, the guy was trying to creep in. I wasn’t sure what to do. I’m not into beating up twinks.”

“And Caleb didn’t say anything?” Styles asked about the Lucky Clover owner. He leaned back against the counter and smiled, knowing damn well the owner wouldn’t have kicked the man out either.

“Not directly to the little blond guy.” Reese smiled, showing off a perfect row of straight, white teeth. “He was actually amused by the whole situation. He said that’s what he paid me for so
handle it
.”

“So did you?” Styles already knew the answer. Reese had a very big sexual appetite. The man was as kinky as they came.

The smile on his face widened right before Reese winked at him. “Oh, I handled it all right.”

There was no way Styles was going to get any details out of Reese. The man never kissed and told. He was a true gentleman, even if he was a big-time freak. It was just a part of his charm.

“I see you haven’t killed those wolves yet.” Reese turned and set his mug of coffee in the sink. “How’s it going at work?”

Styles lifted his shoulders in a shrug. “They’re not that bad—although Tryck still gets on my last nerve.”

Reese nodded. “I heard he can be a pain in the ass. But he has a good side.”

Styles had yet to see it. Working for Tryck Santiago was like working for a lion with a thorn in his paw. The timber wolf was always snapping or grumbling out orders. The only time he seemed content was when his mate was around.

But then again, Styles didn’t like wolves. He had a few damn good reasons for feeling that way.

“Ah, well,” Reese said as he walked toward the kitchen archway. “It’s about time I went to bed.”

Styles looked at his watch to see that it was six in the morning. He knew Reese had worked late at the Lucky Clover. The bar slash restaurant stayed open until midnight. Styles had yet to go to the place. He really didn’t get out much. He was more of a homebody. Work kept him busy and he enjoyed kicking his feet up at home.

Not to say he didn’t go places, but he hadn’t visited a lot of the new establishments in town.

“Later,” he said as Reese raised a hand and waved it at him before rounding the corner.

As Reese walked out, Kenway walked in. Styles remembered the errand he had to run. Tryck had pretty much barked at Styles that he had lost a bet with his brothers and it was his turn to buy breakfast.

Tryck had lost the bet, so why did Styles have to get the damn donuts? He wasn’t going to argue with his boss, even though he had wanted to. “I’ll be by this morning, Kenway.”

Kenway held his chest and grabbed the counter as if he were having a heart attack. Styles rolled his eyes and chuckled.

“What’s the occasion that you’re
finally
coming by my bakery?”

Styles felt bad that he hadn’t come to see Kenway and Ross’s new place. He wasn’t much of a sweet eater and had been too busy when the place first opened. “Wolves are making me pick up some donuts for the shop.”

Kenway walked to the side door and opened it, bending down to grab the morning paper. He tossed it onto the counter before filling his thermal cup with coffee. “Then I guess I’ll see you there.”

Styles went back upstairs. He had a few more hours before he had to be into work. Maybe he could get another hour’s sleep.

Styles pulled his motorcycle in front of the bakery and cut the motor, cursing as he removed his helmet. Maverick was standing outside the bakery, talking on his phone.

He had avoided the alpha every chance he could. He was grateful the man had let Styles and the other men stay at the Manchester place, but the guy was still a wolf.

He knew he couldn’t blow Maverick off, not like he did with any other wolf he had come into contact with. Styles might hate wolves, but he wasn’t an idiot. He knew when to bite his tongue and smile.

As Styles approached the bakery, Maverick finished up with his phone call, sliding his cell into his jacket. Styles walked past him, not saying a word as he reached for the door to Sweet Delight.

“Sometimes you don’t get what you want, but what you need.”

Styles turned back to Maverick, frowning, feeling a bit confused. What in the hell was the guy talking about? Was he talking about donuts?

Light-grey eyes were filled with amusement and if Styles examined them too closely…understanding. But that couldn’t be because there was no wolf alive that would ever understand why Styles was the way he was. Anger filled him, but he shoved it down to the pit of his gut.

Getting pissed at Maverick wasn’t on his list of things to do today. Although Styles wasn’t a coward, he wasn’t stupid either. Instead of letting his own personal feelings get in the way, he smirked at the guy.

“Bakery fuck your order up?” he asked, not really caring about the answer, but knew walking away from Maverick when he was talking wasn’t a wise move.

The side of Maverick’s mouth twitched before the alpha walked away from him, heading toward his Harley. Styles stood there for a moment, wondering exactly what the man had been talking about. He hated riddles and hated being confused even more.

As Maverick slid his glasses on, his head turned back toward Styles, his long black hair swaying over his shoulders. “Don’t give up on him. It’ll be the worst mistake of your life.” The motorcycle thrummed to life before Maverick pulled away from the spot he had been parked in and blended into the traffic that was passing by.

Styles stood there, listening as the roar of the motorcycle faded, an eerie feeling washing over him. He knew he wasn’t going to ask the alpha what he was talking about so he resigned himself to the fact that the riddle would go unanswered.

He didn’t move until a customer tried to walk out of the bakery, Styles blocking the man’s way. He gave the woman a polite smile before he moved aside to allow her to exit before he walked inside, instantly smelling sugar and melted butter, maple and honey. His stomach growled, but he knew donuts were not something that would fill him up.

He still had time. Maybe he would stop by the diner for some breakfast before heading into work.

Dissonance by Stephen Orr
The Pulse Series (Book 1): Pulse by Laidlaw, Steven
La Biblioteca De Los Muertos by Glenn Cooper
Desiring the Forbidden by Megan Michaels
Jack's Christmas Wish by Bonni Sansom
Find A Way Or Make One by Kelley, E. C.
Dancer at Silver Spires by Ann Bryant
The Beginning of Everything by Robyn Schneider
Child of Darkness-L-D-2 by Jennifer Armintrout
A Distant Magic by Mary Jo Putney