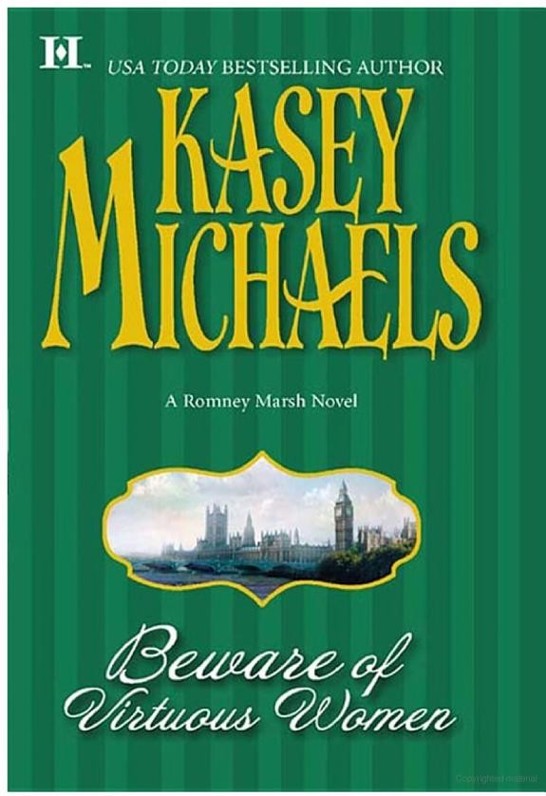 Patriarch Ainsley Becket had taken his band of orphans and given them all new identities and a new life on the shores of Romney Marsh. His intention was to secure each a safe haven from their shocking beginnings and to give Ainsley a reprieve from his dangerous past. But one by one his children are leaving him to find new experiences...and to find mates.

Eldest son Chance Becket moved to London to become a true gentleman, though that did not work out exactly as planned. Now Chance is happily married to his young daughter's governess, Julia, and they are raising a family of their own.

Feisty Morgan Becket was to have a season in London, hopefully securing the hand of a proper suitor...a man who could tame the troublesome debutante. She found a husband, all right, though Ethan, Lord Aylesford, might be just as wild as his new wife.

And then there's Eleanor Becket. Quiet. Unassuming. Or so everyone thinks. But one should beware of virtuous women...

It is 1813. England is fighting on two fronts, against both Napoleon and the United States. There is a third, smaller front—but hardly less important in certain quarters—and this front is on England's own shores, the combatants England's own citizens.

Anywhere the smallest boat might land, everywhere the Crown's war-tightened purse has made day-to-day living precarious, there is the chance that the local populace is dabbling in a bit of free trading—smuggling.

The Beckets of Romney Marsh do not engage in smuggling themselves, but they have jumped in with both feet to
protect
those of their neighbors who do. Their Black Ghost Gang has secured the area and operated in peace for two years. But nov that peace and the entire enterprise are being threatened by the Red Men, a large, vicious gang whose tentacles reach frorr France to London's exclusive Mayfair.

And so is born an unholy alliance between Ainsley Becket's business partner and his own oldest daughter, Eleanor, who travel together to London posing as man and wife to unmask the leaders of the Red Men Gang. Trust between the two is paramount if they are to succeed, but one is tightly wrapped in lies and the other has a potentially explosive secret to protect.

It had all seemed so simple. The man Ainsley Becket had beei the family he had built would all die and come to Romney Marsh to be reborn—safe, hidden, hopefully forgotten.

But the world keeps creeping in...

Please enjoy Eleanor's story and watch for more Beckets in 2007.

To Tom and Carol Carpenter

Eleanor Becket sat in her usual chair near the fire, bent over her embroidery frame.

Her sisters Fanny and Cassandra, the latter still downstairs only because their papa had retreated to his study and didn't know she'd left her bedchamber, were playing a card game they'd invented together, and neither of them quite knew the rules.

Morgan Tanner, Countess of Aylesford, sister to the three and quite happily pregnant, sat with her legs up on a Chinese hassock, wiggling her slipper-clad toes in delight, for the slippers were new, and she rarely saw them. At least not while standing up and attempting to peer straight down.

A log fell in the large fireplace in the drawing room where they sat, and all four women momentarily looked up from what they were doing, then settled back to passing the time as best they could.

"They're fine," Eleanor said a few minutes later in answer to the unspoken question that had been hanging in the room all evening, and Fanny agreed that of course they were.

"Just enough mist over the water to hide the
Respite,
not enough to hamper them. And the moon couldn't be more perfect," Morgan said, looking toward one of the large windows and the dark beyond. "Callie, stop chewing on your curls. You'll end up with a hair ball in your belly. Odette will pour castor oil down your gullet, and there will be no lack of volunteers to hold you down."

Fifteen-year-old Cassandra Becket used her tongue to push the light brown corkscrew curl from her mouth, then frowned at its damp length. "I can't help it, Morgie. I'm nervous."

"And hours past your bedtime, as it's nearly three," Eleanor pointed out, taking another stitch in her embroidery, pleased that her hands were steady. "You, too, Morgan."

"Me? I'm pregnant, Elly, not delicate. In fact," she said, looking down at her stomach, "I'm about as
delicate
as a beached whale."

Morgan reached behind her and drew out one of the small silk pillows she'd placed there to make her comfortable, then launched it at her sister's head.

Fanny neatly caught the pillow, then stood, pressed it against her own flat stomach. She bent her spine back as far as she could, still holding the pillow to her, and began walking across the room, her feet spread wide. "Do I have it right, Callie? Enough of a duck's waddle to look like our dear, sophisticated countess?"

Callie considered this, then said, "Perhaps if you had first stuffed your cheeks with sugarplums?"

Eleanor smiled as she continued to bend over her embroidery. It was so good to have Morgan home with them after so many months away, but if her baby didn't come soon even Eleanor would be harboring a few fears that the girl would simply explode on her own, and not need Odette's midwifery.

"What was that? Fanny, Callie, sit down and be quiet. I think I heard something. Elly? Did you hear anything?"

Eleanor stood and walked over to Morgan, gently pushing her back down into the chair. "We don't want to appear to be too anxious, Morgan. It's bad enough we're all sitting up with you, just as if we don't expect them all to be fine. Ah—now I hear it, too. They're back. Everyone, do your best to appear unconcerned."

Fanny and Cassandra had already picked up their cards again, and Eleanor was once more bending over her embroidery frame as the Becket men entered the drawing room to catch Morgan in the middle of a prodigiously overdone yawn.

"Oh. Look who's back," Morgan said, "and none the worse for wear. Although, darling, could you possibly manage to wipe that ridiculous grin from your face?"

Ethan Tanner, Earl of Aylesford, pulled at the black silk scarf tied loosely around his throat and lifted it up and over his mouth and nose. "Better, darling?" he asked, then bent down and kissed her rounded belly. "Up late, aren't you, infant?"

"Are you referring to me or the baby? Come here, let me hold you. I know you were enjoying yourself romping about playing at freetrader, but I haven't had a peaceful night waiting for you."

Eleanor watched, glad for her sister's happiness and yet somehow sad at the same time, as Morgan yanked down Ethan's mask and grabbed his face in her hands, pulling him close for a long kiss on the mouth.

"At it again, Ethan?" Rian Becket said as he stripped off his gloves and accepted the glass of wine Fanny had fetched for him. "I think I should point out that the damage is already done."

Cassandra giggled, which drew the attention of Courtland Becket. "Been chewing on your hair again? And what are you doing down here at this hour? Get yourself upstairs where you belong."

Eleanor hid a sympathetic wince as Cassandra's pretty little face crumpled at this verbal slap and the child plopped herself down on one of the couches, to sulk.

Didn't Courtland know how desperately Cassandra worshipped him? Or perhaps he did, poor man. "Court? Does Papa know you're back?"

"He does. We came up the back stairs from the beach," Courtland told her, pouring himself a glass of claret. "And, before you ladies ask, the run was completely uneventful."

"You may say that, Court," Ethan said, sitting perched on the arm of the chair, holding Morgan's hand. "If it's uneventful to you that we had to evade the Wa-terguard and make land two hours behind schedule." He lifted Morgan's hand to his mouth, kissed her fingers. "God, but it makes your blood run, darling. I'll have to do this more often. Can't let everyone else have all the fun."

Savage Lands by Clare Clark
Lost by S. A. Bodeen
Claimed By A Charmer (The Pith Trilogy) by Griffin, Kara
Dresden by Frederick Taylor
Do You Want to Know a Secret? by Mary Jane Clark
Changing Grace by Elizabeth Marshall
Rosencrantz & Guildenstern Are Dead by Tom Stoppard
The Sloan Men: Short Story by David Nickle
TT13 Time of Death by Mark Billingham
This is What Goodbye Looks Like by Olivia Rivers