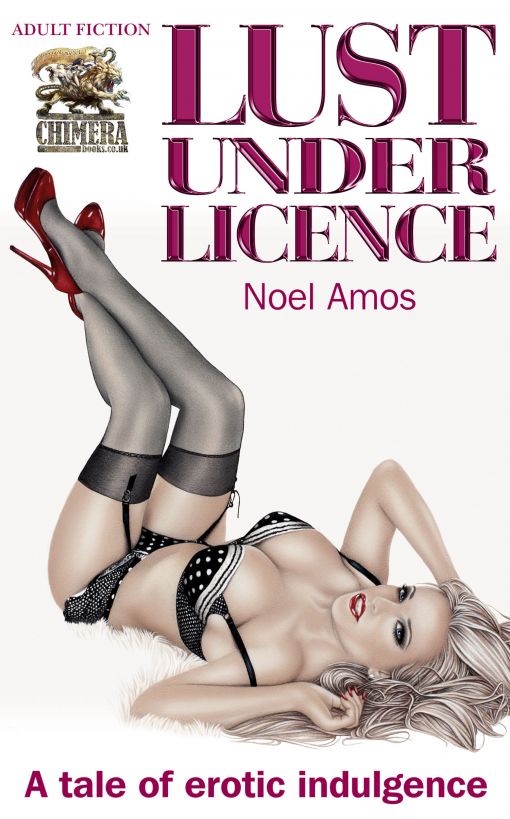 Lust Under
Licence first published in 1995 by Headline Book Publishing.
Published as an eBook in 2011 by Chimera eBooks.

Chimera (
ki-mir'a,
ki-
) a creation of the imagination, a wild
fantasy.

New authors
are always
welcome, or if you're already a published author and have existing
work, the eBook rights of which remain with or have reverted to
you, we would love to
hear from you
.

This work is
sold subject to the condition that it shall not, by way of trade or
otherwise, be lent, resold, hired out or otherwise circulated
without the publisher's prior written consent in any form of
binding or cover other than that in which it is published, and
without a similar condition being imposed on the subsequent
purchaser. The author asserts that all characters depicted in this
work of fiction are eighteen years of age or older, and that all
characters and situations are entirely imaginary and bear no
relation to any real person or actual happening.

Copyright Noel
Amos. The right of Noel Amos to be identified as author of this
book has been asserted in accordance with section 77 and 78 of the
Copyrights Designs and Patents Act 1988.

This novel is
fiction - in real life practice safe sex.

The women meet
in a sunny conservatory. They sit round a glass table on padded
cane chairs and drink iced mineral water from tall glasses. Some
make notes on leather-backed pads, one takes minutes on a laptop
portable. A female observer would approve of their style, in
particular the elegant cut of their summer suits and dresses. A
male observer might be tempted to look further than the packaging
and imagine exploring the delectable flesh within.

But there are
no observers to this meeting. Its concerns are secret and only the
palms and ferns swaying in the cool down draught from the ceiling
fans are witness to its deliberations. The Corrections Committee of
The Primrose Court is going about its weekly business. That
business is the regulation of sex. And the prosecution of men.

'What are we
going to do about this,' says a willowy brunette as she pushes a
thick folder into the middle of the table, 'in the light of recent
events?'

'I thought
that gentleman might get a mention,' says the chairwoman, a
well-preserved blonde of indeterminate years.

'Nail the
bastard now,' says a woman in a thin skinny-ribbed top.

'I agree,'
says another, her short black hair as stylishly cropped as a French
mannequin. 'Let's get him while public opinion's on our side.'

The chairwoman
sighs, the mood of the gathering is plain. Very well,' she says.
'Pass the file to Prosecutor Hawk.'

The patient
woke on the third day. A woman was bending over him and his first
impression was of the view down the neck of her candy-striped
blouse as she adjusted his pillows. A shaft of sunlight shone from
a window onto the pale skin of her cleavage which gaped, milky and
warm, inches from his face. The aroma of chocolate and perfume rose
from her dimpled flesh. On the sumptuous cupola of her right breast
was a name tag.

The woman
leapt backwards as if she'd been stung. A shilling-sized circle of
scarlet blazed on each cheek and her blue eyes were wide with
alarm.

She gave up
the struggle to finish the sentence and ran from the room with a
squeak of laughter. As she did so the patient couldn't help
noticing that, for a nurse, her skirt was distractingly short.

He looked
around the room. There were swagged floral curtains on the high
windows and Matisse prints on the wall. The carpet was thick.
Opposite his bed was a large television set and on top of it a card
offering a choice of movies. Next to a writing desk stood a small
teak cabinet labelled 'Minibar'. Only the bed on which he lay and
the bank of instruments that surrounded it, some with tubes which
snaked beneath the sheets, indicated that he was in some kind of
medical establishment. From behind his head, in the room next door,
came the thump of rock music and raised, cheerful voices.

'Where am I?'
he said to the woman in a white coat and granny glasses who now
entered the room accompanied by a more composed Nurse Biscuit.

'Partridge
Place,' she replied, taking a clipboard of notes from the end of
the bed.

The patient
thought for a second. The catch phrase from an advert came into his
head: 'The Exclusive Care Facility for Exclusive People,' he
said.

'You won't get
better care elsewhere,' said the woman, failing to add 'or more
expensive' - it went without saying.

Her fingers
were cool and firm as she took his pulse. Like Nurse Biscuit, she
too wore a name tag. She saw the direction of his gaze.

'I'm Madeleine
Flint,' she said, 'the consultant in charge of your case.'

This time
Nurse Biscuit could not control her laughter.

They brought him the papers to read and left him alone, though
he heard plenty of stifled whispering at the door. He had the
impression he was being observed. He soon forgot about it as he
turned to the front page of the
Daily
Dog
.

Millionaire
businessman Tom Glass, the City's Mr Cool, fell off his pedestal
yesterday when he survived an embarrassing freak accident that
landed him in hospital. Theatre-goers emerging from The Gryphon
Theatre discovered Glass half naked in a builder's skip in the road
outside his office at 10.30 last night. It is assumed that Glass
fell from the balcony of his penthouse on the tenth floor.

'When I left
the theatre I saw a man lying in a pile of rubbish,' said Randolph
Sutcliffe, 43. 'At first I thought he was drunk. He was wearing
stockings and suspenders but no trousers and he had a pair of
ladies' knickers on his head. He looked like he'd been having a
high old time. What's more, he was still up for it, if you know
what I mean. My wife's in shock.'

Last night
Glass was recovering in a luxury hospital reserved for the nobs.
Staff at his company, Glass Mountain, were tight-lipped about the
activities of their owner and Chief Executive. 'As far as I know,
Tom was working late,' said a company spokesperson. 'We're all
praying he'll soon be back on the job.' Mr Glass's fiancée,
Marianne Matthews, Badger TV's weather girl, was not available for
comment.

The other papers, in their various styles, were no less
gleeful. The
Daily Blizzard
made the incident the subject of a centre-page
comment:

The Blizzard
finds it shameful that one of our best and brightest young
entrepreneurs should be guilty of gross impropriety in public on
the same day that the business community launches its New Leaf
campaign to reinforce moral values in the office environment. Such
conduct undermines all the good work put in by right-thinking male
executives and is a calculated insult to the increasingly powerful
female voice in the business world. Tom Glass has been dead lucky
this time but we suggest that he cleans up his act fast - even fat
cats can run out of lives.

The patient
stared at the pile of newspapers. There were three days' worth and
the story even rumbled on in the most recent. It didn't make a lot
of sense to him. He couldn't remember any of it. He jabbed his
finger onto the red alarm button by his bed. Nurse Biscuit appeared
at the door instantly.

'Get me a
mirror,' he demanded before she had set foot in the room. His voice
was deep and authoritative. The sound comforted him. 'What are you
waiting for?' he yelled and the rosy-cheeked nurse vanished,
returning with a hand mirror a moment later.

He studied the
photographs in the papers and compared them with his reflection:
straight nose, cleft chin, a shock of dark hair falling over the
brow. It was the same man.

Nurse Biscuit
was looking at him closely, fear and curiosity written on her
pretty face.

'What's your
first name?' he said.

He held out
his hand and took her small one in his grasp. 'It seems mine is
Tom. Sit down, Eve, and tell me all you know about me because,
believe me, I haven't got a clue.'

She hesitated,
her hand still in his. He wouldn't let go.

'It's all
right, Eve,' said the voice of Dr Flint as she advanced on the bed
holding a hypodermic needle. 'You can stay and chat to Mr Glass
after he's had his injection.'

'What's that
for?' said Tom, suspicion in his voice, as his sleeve was raised
and Madeleine Flint aimed her weapon.

'Relax, Mr
Glass, you're not lording it over your business empire now.' And
she slid the needle into a vein.

'What business
empire?' Tom shouted. 'Don't you understand - I can't remember who
I am!'

'Trust me,'
said Madeleine, emptying the syringe into his arm. 'I promise
you'll soon remember things you never knew you knew.'

Gossamer Hawk
rose at six every day to take a leisurely bath. As she luxuriated
in the warm soapy water she sometimes heard the screams and bellows
of her two toddling offspring as they rampaged on the floor below.
If they were too noisy she would reprimand her husband, Peregrine,
over breakfast. Gossamer needed tranquillity first thing in the
morning to prepare her mind and body for the rigours of the day
ahead.

After milkless
tea, wholemeal toast and a quick skim of the newspapers she watched
Perry herd Annabel and Pasco into the family Volvo to ferry them
off to nursery school. Then she made a list of house-husbandly
tasks for Perry to accomplish during the day: 'Iron my turquoise
blouse, fetch the dryclean, return P's library books, do
Sainsbury's and don't forget Blenkinsops are coming for dinner -
asparagus soufflé rack of lamb would be nice. I'll try to be back
by eight.' At last, with the satisfaction that comes from unselfish
delegation, she whisked her scarlet Honda Prelude out of the garage
and plunged into the traffic heading for central London. Prosecutor
Hawk was ready for business.

Gossamer's
appointment to The Primrose Court had taken newspapers by surprise.
What was a little-known barrister, a mother-of-two with an inane
giggle and a schoolgirl vocabulary, doing at the cutting edge of
sexual correction? To outsiders, this rangy English rose with
unruly fair hair and disarming milky-blue eyes seemed lightweight.
But those who had seen her operate - such as her former colleagues
in chambers and her opponents in court - knew that the rose had
thorns.

Gossamer was a
great believer in the clear-desk policy. First thing in the morning
her in-tray groaned with paper; by the end of the day not a scrap
would be visible. The rapid assimilation and processing of material
was one of her strengths. She had once been the school swot - it
was the foundation of her success.

Today she
beavered at her in-coming paper pile with customary zeal. She had
an interview with a journalist scheduled for eleven and she aimed
to clear her desk by then. Soon she was down to just one item, a
thick yellow file bulked out with newspaper cuttings. She read the
name scrawled in black felt-tip on the cover and settled down to
read with glee. For once she was going to take her time.

An hour later Gossamer was interrupted by the arrival of
Kelvin Priest of
Nouveau
, a modish magazine for thinking men - or so it claimed.
Giving interviews to the press was not Gossamer's favourite task,
particularly to such a small-beer publication. But selling the
business of The Primrose Court to the thinking man
was
part of her
job.