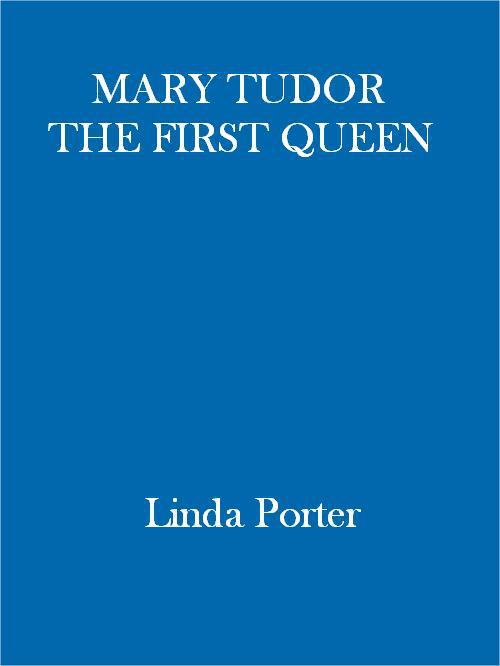 Hachette Digital
www.littlebrown.co.uk
Published by Hachette Digital 2010
Copyright © 2007 by Linda Porter
The moral right of the author has been asserted
All rights reserved
No part of this publication may be reproduced, stored in a retrieval system, or transmitted in any form or by any means, without the prior permission in writing of the publisher, nor be otherwise circulated in any form of binding or cover other than that in which it is published and without a similar condition including this condition being imposed on the subsequent purchaser
A CIP catalogue record for this book is available from the British Library
eISBN : 978 0 7481 2232 5
This ebook produced by Jouve, France
Hachette Digital
An imprint of
Little, Brown Book Group
100 Victoria Embankment
London EC4Y 0DY
An Hachette Livre UK Company
To the memory of my beloved parents,
Kenneth and Kathleen Ford
Truth, the daughter of time
Mary’s motto as queen
Acknowledgements
When I first told friends and acquaintances that I was writing a new life of Mary I there was a mixed reaction. Some agreed it was high time that England’s first queen regnant was portrayed in a more positive light. Others, however, were convinced that the legend of Bloody Mary was so firmly established in popular consciousness that it would be impossible to change opinions.Yet there continues to be a growing body of cross-disciplinary research on Mary’s life and reign which is opening up new ways of looking at the neglected mid-Tudor years. At the moment this is largely restricted to the academic community but it is worthy of a much wider audience. In researching and writing the book, I am conscious of the debt owed to the scholars who have specialised in the field, particularly Professor David Loades, Professor Robert Tittler and the late Dr Jennifer Loach. I hope that my biography will be a first step in bridging the gap and that it will persuade the sceptics that a historical reputation that has stood largely unchallenged for 450 years should be reconsidered.
Many people have provided guidance and support. I should like to thank in particular Alan Brooke, my editor at Portrait, for his consistent enthusiasm and suggestions for improvement. My agent, Andrew Lownie, has been an inspiration through a number of quiet years, when I almost gave up the idea of writing altogether. His constant encouragement is a great gift to authors. My thanks, too, go to Henry Bedingfeld for letting me see the wonderful collection of documents at Oxburgh Hall and for the hospitality that he and his wife Mary offered on a stormy November day. I am especially grateful to Jessie Childs for alerting me to what was at Oxburgh and for discussions on the Tudor period. Similarly, thanks are owed to Dr Alice Hunt of Southampton University for sharing her views on the latest direction of scholarly research. Professor Hilary Critchley at the Centre for Reproductive Medicine in the Queen’s Medical Research Institute in Edinburgh took time to provide me with an understanding of the possible causes of Mary’s health problems and I am grateful for her insights. On a lighter but no less fascinating note, Tanya Elliott advised on Mary’s wardrobe and was eloquent in her own positive views of Mary herself.The superb replica of Mary’s wedding dress is evidence of Tanya’s enthusiasm for her subject, as well as her skill as a needlewoman. I must also thank Viscount and Viscountess De L’Isle at Penshurst Place for letting me see the portrait said to be of Mary in their private collection.
My thanks are also due to the ever-helpful staff of the London Library, the British Library, the National Archives and the Westminster Abbey Library. Last, but certainly not least, I acknowledge the debt I owe to my husband, George, who has lived longer with Mary Tudor than her own husband ever did.This book would have been impossible without him.
A note on monetary equivalents
Modern equivalents of 16th-century monetary values are generally avoided by scholars of the period. Rampant inflation, frequent debasement of the coinage and information on wages and prices that is, inevitably, incomplete have deterred most writers. This is not, however, very satisfactory from the perspective of the general reader, who would like some idea of what Mary’s allowance from her father and her gambling expenditure, for example, might amount to today. I have used the equivalents given on
Measuringworth.com
, which was founded by Professor Lawrence H. Officer of the University of Illinois at Chicago and Professor Samuel H.Williamson of the University of Miami.
Picture credits

4 July 1553
I
t is past midnight at the royal manor of Hunsdon and the rolling countryside where Essex meets Hertfordshire is hidden by the brief darkness of a midsummer’s night.Yet there is activity; quiet, unobtrusive, but deliberate. A knot of people is gathering, ready to mount the horses that have been taken with great care from the stables, so that their hoofs hardly make a sound.The party is a small one, perhaps no more than four or five. In their midst is a thin woman, not beautiful but with a commanding presence, whose distinctive red hair is hidden under the hood of her cloak. Despite the warmth of the night, she prefers, indeed requires, to be hidden by her garments. She and her advisers have thought of a plausible story to cover her departure. They have put it about that her doctor himself is ill with the plague. Still, they would prefer her to be well away from Hunsdon before her absence is noted. This rural corner of eastern England is both the source of her wealth and her support but, in these unpredictable times, no one is to be entirely trusted.The fewer people, even in her own household, who know what she is contemplating, the better.
Once astride her horse - and she has been a fine rider since early childhood - she does not immediately move. For a few seconds, she looks back over the events of her dramatic life. She has lost much and now stands to lose even more. Once she was a princess, carefully raised to be a queen. She had felt secure in the affection of both her parents and confident that she would be able, when the time came, to fulfil the role of monarch.Then her world, a tranquil place of learning and music and privilege, came crashing down. Her father could not rid himself of the desire for a son and, as his anxieties preyed on him, so did the wiles of that woman whose name she could scarcely speak:Anne Boleyn. After six years of belaboured argument and spirited opposition, her mother, Katherine of Aragon, was cast aside and she, the true heir of England, bastardised. In the ferment, her father cut his allegiance to the pope in Rome and let heresy into his kingdom. There followed three years of absolute misery, during which she had known very little but persecution, ill health and fear. It ended with her capitulation to her father’s wishes, but her conscience could never accept what her pen had signed.
ADS
15.4Mb size Format: txt, pdf, ePub

The Wedding of Zein by Tayeb Salih
The Silver Lake by Fiona Patton
Everything and Nothing by Araminta Hall
Lexie by Kimberly Dean
Peaches for Monsieur Le Curé by Joanne Harris
Mothballs by Alia Mamadouh
Jimmy Stone's Ghost Town by Scott Neumyer
Wounds of Honour: Empire I by Riches, Anthony
Party Crasher by Angel, April
Órbita Inestable by John Brunner