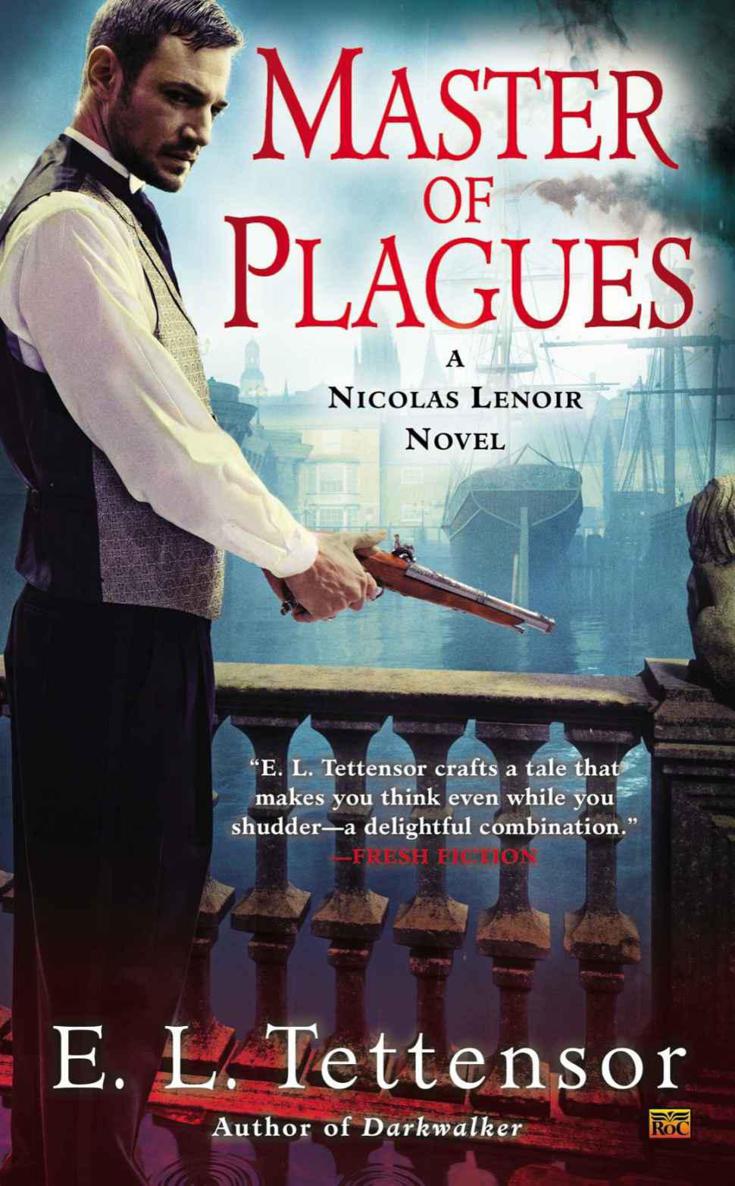 “[
Darkwalker
] is wonderfully weird, fantastically far-fetched, and a riveting read.”

“Take Sherlock Holmes’s London, change the name, and place it somewhere else with another cultural group nearby that transects it, and take the dark, dreary factor way up. This is where our story takes place . . . and it is mesmerizing . . . an outstanding debut novel.”

—That’s What I’m Talking About

“What a fantastic start . . . a dark fantasy detective story that takes readers on a dark, sometimes disturbing journey. E. L. Tettensor crafts a tale that makes you think even while you shudder—a delightful combination.
Darkwalker
is brilliant!”

“History and mystery spark in this effervescent series debut.”

“A new paranormal mystery series featuring an intriguing main character and rich, thorough world building; once the story takes off, it does not stop . . . surprising and fantastic.”

“A fantastic debut novel set in a wonderfully realized world.”

—Nothing but the Rain

First published by Roc, an imprint of New American Library,

For Danielle, with thanks for taking a chance

D
rem lurched through the mist, putting one foot resolutely in front of the other, his boots slurping in time with the throbbing of his head. Cold, wet droplets soaked his brow. How much of it was weather, and how much sweat, he couldn’t tell. He raised a hand to his forehead and found what he expected: warm, even through the damp.
It’s fever, all right,
he thought
. Isn’t that just perfect?
All he wanted was to lie down, to curl up in a corner of his shack and sleep, but if he didn’t put in his time at the clinic, he wouldn’t eat today.
Just a little farther,
he told himself.
Maybe Sister Rhea will let you rest a bit before she puts you to work.
The nun was a kindly sort—you’d have to be, running a clinic in a slum—and she wasn’t likely to be too demanding once she saw the state Drem was in.

The mist turned to drizzle as he slogged on. Drem started to shiver. The fog swept in, a foul gauze clinging to the cankers that passed for dwellings, the seeping gouges that served as roads. The main avenue, already quiet, began to clear as the slum’s residents fled the weather. A trio of ragged Adali children gathered their pebbles up out of the mud and scattered, bounding away like startled deer. On the other side of the road, a woman
selling bread cursed a salty streak as she tried to hustle her wares inside before they were ruined.
Summer in the Camp,
Drem thought wryly. God, he hated this place.

He could hear coughing from several of the shacks he passed. Women and children, old men and young, they all sounded the same—gusty, crackling
whoops
that made Drem’s chest tighten in sympathy. Half the Camp seemed to have it.
It’s that damn cough that’s doing it,
he thought.
Has to be.
Nothing but plague could account for so many deaths in such a short span of time. It didn’t explain why no one had come to claim the bodies, but maybe that wasn’t so strange. This was the Camp, after all; a bigger collection of indigent, anonymous wretches had never been.
Wretches like you, Drem Eldren
. If the cough got him too, would anyone care? Sister Rhea, maybe. Then again, maybe not. The nun had seen so much of death, especially these past few days. Most likely, the sight of Drem’s corpse wouldn’t inspire much more than the usual sigh and shake of her head.
Another of God’s children called home,
she’d say, as though life were nothing more than the brief distractions of a child, a game of pebbles in the street.

Up ahead, a shape appeared in the fog: a blood-colored hand reaching, disembodied, through the veil.
At last.
With the clinic in sight, Drem managed to liven his gait a little. The healer’s flag rolled gently as the rain picked up, the crimson hand seeming to wave him inside.

The stench hit him as soon as he pushed through the tent flap: sweat and bedpans, herbs and potions, pestilence and decay. Drem should have been used to it by now, but in his fevered state, it was almost too much for him; he had to fight down a wave of nausea.

“Ah, good.” Sister Rhea glanced up from whatever medicine she was preparing, her warm eyes crinkling at the fringes. “I was beginning to think I wouldn’t see you this morning.”

“Not quite, but we’re definitely shorthanded. It’s the weather, I think.” The nun meted out a few drops of dark liquid into a glass of water. Her shadow, grotesquely elongated in the lamplight, mimicked the gesture against the stained sheet separating the vestibule from the patient beds.

“Didn’t see the wheelbarrow outside,” Drem said. He hoped that meant one of the other volunteers had taken it. Let someone else collect the corpses for once.

“No, thank the Lord, it’s still out back. We’ve not had any reports this morning. It’s a blessed relief, after the last few days. I was beginning to think we had an epidemic on our hands. So many dead . . .” As she spoke, a tattered cough sounded from the other side of the partition, as if warning the nun not to count her blessings just yet.

The nun hummed thoughtfully. “I don’t think so. More like the flux, from the condition of the bodies, though that’s not quite right either. The flux doesn’t cause that kind of bruising, and it certainly doesn’t do that to the eyes.”

Drem shuddered. He’d almost managed to forget the eyes. He had no fear of dead bodies—could hardly work in a clinic if he did—but the ones he’d been collecting lately were different.
Those
corpses haunted his nightmares. The purple welts, the distended bellies—those were bad enough. But the eyes . . . He couldn’t begin to guess what caused a man’s eyes to bleed like that. He supposed he didn’t want to know.

Someone moaned from the patient beds, calling for water. Sister Rhea scarcely seemed to notice; she was too busy looking at Drem. Her expression was pinched, unsettling. “Are you all right? You’re white as a sheet.”

Instinctively, Drem touched his forehead again.
Even
warmer.
“I’m fine, Sister. Thank you.” He needed to put in at least a little work today, or he wouldn’t feel right taking the food. If he’d wanted outright charity, he wouldn’t have volunteered at the clinic in the first place.

“You don’t look fine.” The nun set the glass of water down on her medicine table. “You’re sweating, and . . . Is your nose bleeding?”

Drem’s fingers brushed his nostrils and came away smeared with blood. He grunted in surprise. “Looks like. I didn’t know.” He accepted a handkerchief. “Thank you, Sister.”

“Sit down, please.” The nun gestured at her own chair. “Have you been coughing?”

“Pain in your chest? Shortness of breath?”

“Take a deep breath, please.” The nun pressed an empty glass between Drem’s shoulder blades and bent her ear to it. Embarrassed, Drem did as he was told, breathing in and out, in and out, until Sister Rhea was satisfied. “Your lungs sound fine.”

I could’ve told you that.
“I do feel a bit light-headed, though.” Even as he said the words, tiny specks of light swarmed in his vision. He felt something warm and sticky on his upper lip.

“Tip your head back!” Sister Rhea grabbed the handkerchief and clamped his nose with it. Moments later, Drem tasted blood at the back of his throat. Now he did cough, and once he started, he couldn’t seem to stop. He hacked until his eyes watered, until he could hardly breathe. Droplets of red spattered the sheet wall in front of him, spreading like tiny ink stains. When at last the spasm subsided, he found himself doubled over and gasping for breath, clutching his nose and wondering how in the below a grown man came down with a gushing nosebleed.

He was going to ask Sister Rhea, but when he raised his head, the look on the nun’s face made his heart stutter. “What is it, Sister?”