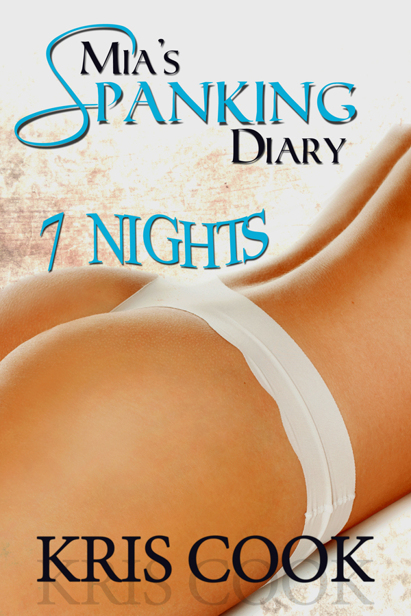 All rights reserved. This copy is intended for the purchaser
of this e-book ONLY. No part of this e-book may be reproduced, scanned, or
distributed in any printed or electronic form without prior written permission,
except in the case of brief quotations embodied in critical articles and reviews.
Please do not participate in or encourage piracy of copyrighted materials in
violation of the author's rights. Purchase only authorized editions.

Special thanks to Chloe Vale, Kendra Egert, Melissa Schroeder,
Shayla Black, and Lexi Blake for all the encouragement and help with this book.
Thanks to my friends at Righteous Perverts.

This is much harder than I thought. I haven’t written in one
of these since I was thirteen when I had a crush on my eighth grade science
teacher, Mr. Blackwell. That seems a hundred years ago, but it’s only been
twelve, almost half my life.

Often times my thoughts get all jumbled up. I remember the
last time I had to give a speech in a class. What a mess! Thankfully, I rarely
have to speak publicly. It’s a bit of a phobia with me. I took out a butt load
of student loans to avoid the road many grad students take – the dreaded prof’s
aide.

Keeping a diary seemed like such a good idea last night when
I bought this. Now, I’m not so sure. Isn’t keeping a journal of your thoughts
more of an adolescent activity than that of a college grad working on her
master’s in sociology? Mostly true. But I need a distraction from all the
dead-end research of my fucking thesis.

Why the hell did I choose the topic: “Principals and
Practices of Participants of Bondage and Discipline, ‘Sadomasochism’ or
Dominance and Submission (BDSM)?” One reason was to impress my adviser, the
head of the department, Dr. Emily Vickers. What to say about Dr. Vickers? The
day I gave the title of my thesis to the emotionless iceberg, her lips actually
curled up just a bit. It didn’t shock her like I’d wanted. I have to admit I
kind of wanted to watch the woman faint. Instead I’d felt something like satisfaction
roll over her. Weird, but it was her first positive feedback about my work. I
would’ve liked a little more from her, but the nonverbal reaction would have to
suffice. Still, I decided to count that small smile as a victory.

Now, four months later with no real data to speak of, I
think I may have painted myself into a corner.

I chose to write about sex. Smart, Mia. Really smart. I
haven’t had that much experience with sex, but that’s not to say I’m totally
naive about it.

I’ve had four boyfriends. The first one in ninth grade
turned out to be gay. We’re still friends. The next two, not so much. The last
one was really sweet, and I get a birthday card from him every year.

My first straight boyfriend was a virgin just like I was at
the time. We fumbled our way through that first night together. He came. I
didn’t. In fact, I never did reach orgasm the four more times we had sex. It
was fun, though, and his kissing did improve over the year we were together.
Unfortunately, his dad got transferred to Japan, and I never saw him again.

There was one time when he introduced me to spanking. I was
soaked and had my one and only multiple-orgasm. He awoke something inside me
that has lingered under my buttoned-up surface ever since. He’d pulled out a
paddle that was flat and round. It had looked a little like an oversized
version of a ping-pong paddle and had me mesmerized the instant I saw it. I’d
just known that it would do something for me. Maybe that was why I’d bared my
ass and knelt on all fours. Not for him in particular, but for that paddle and
where I thought it might take me. Fuck, that experience was fantastic, and if
I’d not found out what a motherfucker he was, I might’ve stayed with him longer
just to feel his paddle on my ass every night.

My last boyfriend was really nice. But everything with him
was so vanilla, including sex. There was quite a bit of it over the fourteen
months we were together, but I never reached orgasm. God, I tried. It may sound
crazy, but he was too sweet. I got flowers once a month, and he always let me
pick which restaurant to go to. It was exhausting. Whenever I offered to help
him with errands or whatever, he would tell me he had it covered. He didn’t
understand why I broke it off with him, but I had to.

Shall I be totally honest? Why not? This is never going to
be read by anyone.

That’s enough about my illicit fantasies. See what I mean
about my mind wandering? Let me get back to where I’m at with my thesis.

I’ve shared my difficulties with Dr. Vickers, who couldn’t
seem more disinterested if she tried. Her lackluster answer was to recommend I
attend a lecture tomorrow night she’s hosting. Tomorrow night! Classes don’t
start back up until Monday, January 12th. The woman hates me. With her as my
adviser, I’m definitely on my own, that’s for sure. A dull lecture is the last
thing I need to finish my paper. I have half a mind to blow the boring lecture
off. Maybe I’m not as much of a masochist as I thought, but she’s damn straight
a sadist.

Knowing that it’s just you and me, diary, gives me courage to
state my true feelings. For example: Dr. Vickers is a coldhearted bitch!

That felt so freeing. Expressing my intimate feelings here
is going to be nice.

I guess I’ll go to the lecture just to keep Dr. Vickers off
my back.

I think I’m going to enjoy this journaling.

That’s all for tonight.

Wait. Let me backtrack and get my thoughts in order, though
the way I’m feeling, that might be hard to do. I can’t believe I actually
jumped into this whole thing with my ass in the air—and for someone I just met.

Damn. His hand on my ass had me reeling from a million
sensations.

I can’t do this right now.

Let me get back to the events of this amazing night.

It all started when I arrived at the lecture Dr. Vickers had
told me to attend. I had thought about blowing it off. I’m so glad that I
didn’t. I went to the lecture in the hopes of garnering an interview or at
least some takeaways for my master’s thesis, but what I received was much more
than I could’ve ever expected.

There were only fifteen people in attendance. Dr. Vickers
passed around a sign-in sheet for the undergrads. Apparently, she was giving
them some extra credit for attending. When my nemesis saw me enter, she pointed
to the chair in the center of the front row, indicating that was where she
expected me to sit. And though it pissed me off, I still complied. I don’t know
what it is about me that I respond so easily to authority, even when I despise
the person. A firm voice and a dismissive wave of a hand and I find myself
unable to resist.

The rest of the attendees sat behind me from the third row
to the last row. I sat alone with my hands in my lap like a little schoolgirl.
Awkward. Sums up my life.

Then
he
walked in.

The speaker instantly had my heart pounding in my chest and my
breath hitching in my lungs. He overflowed with confidence and power with each
step, like a gladiator coming on the field to defeat anyone foolish enough to
challenge him. In his early thirties, the man’s coal black hair was cut razor
short, and his face, though not Hollywood handsome, had a ruggedness that made
me squirm in the metal chair. His jaw was square, and he sported a five o’clock
shadow. His eyes were so piercing blue I found myself unable to look away. In
fact, every woman in the place was near drooling over his six-foot-five muscled
frame. The speaker’s arrival instantly silenced the chatter among the other
males in the room. Their combined testosterone would barely fill a thimble
compared to his.

Dr. Vickers stepped up to the lectern and pounded on it with
her fist. “Quiet students.”

Since no one was talking, I found her command odd. Oh, well.
I knew I would never figure her out.

I gasped aloud the instant Dr. Vickers mentioned the name of
the speaker’s Internet show, but thankfully, no one seemed to notice.

Clapping, I felt my temperature go up several degrees as his
searing blue eyes seemed to fix on me.

“Thank you, Dr. Vickers for inviting me. Instead of giving a
boring speech from a stale outline, I’m going to have you ask me questions, and
I will answer them. Got it?”