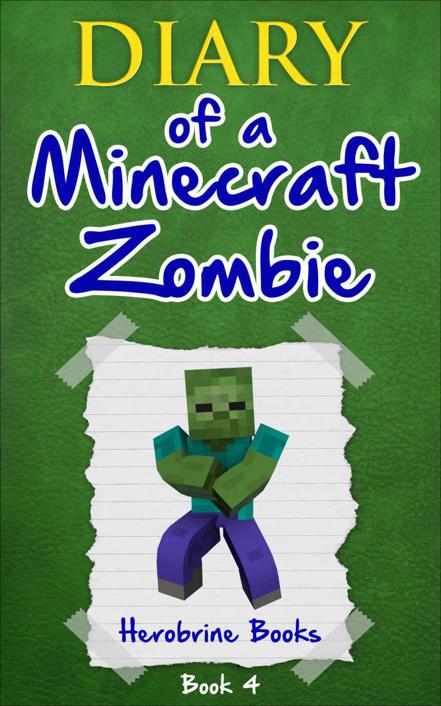 Check Out Our Other Books from Herobrine Books:

All rights reserved. No part of this publication may be reproduced, distributed, or transmitted in any form or by any means, electronic or mechanical, including photocopying, recording, scanning, or by any information storage or retrieval system, without the prior written permission of the publisher, except in the case of brief quotations embodied in critical reviews and certain other non-commercial uses permitted by copyright law.

This unofficial Minecraft novel is an original work of fan fiction which is not sanctioned nor approved by the makers of Minecraft. Minecraft is a registered trademark of, and owned by, Mojang AB, and its respective owners, which do not sponsor, authorize, or endorse this book. All characters, names, places, and other aspects of the game described herein are trademarked and owned by their respective owners.

“Wake up sleepy head, it’s time to rise and shine!”

“I said it’s morning time and it’s time for you to get up.”

Morning? Wha…Did my parents forget that Zombies burn in the daylight?

“Who are you calling Mom?”

Oh Man! It wasn’t a dream. I really did swap bodies with Steve!

Now this villager is trying to get me out of bed early in the morning, and make me go out in the daylight.

I better play along so I won’t give myself away.

“What’s the matter with you, Steve? Did you get bit by a Zombie or something?

So much for my acting skills.

But I’d better get good at it quick, because I’m going to have to act like Steve for the next few weeks until the full moon. That’s when the Swamp Witch that can switch our bodies back comes home.

I just have to remember what Steve told me.

I think he told me that to blend in with humans, I just had to stick with the basics…

“Humans are simple.” Steve said. “As long as you do what they do, you’ll fit right in.”

So, what does Steve do all day? Let me see…

I know that he likes mining, farming, and punching trees. I guess as long as I do those three things, I should fit right in.

But how am I going to learn how to do any of those things? I’ve never done them before!

Then a ray of sunshine came into my room.

At first I freaked out because I thought my skin would fry like bacon.

But then I realized that being Steve has its perks. I don’t have to be afraid of the daylight anymore!

So, first thing I did was go out into the open field to take in all of the sunshine.

It felt really good on my face and body. But, it was a little too bright though.

I was able to see all the fields, and the trees and the lake…

I just realized that I could now jump in water and swim!

But now, I can go in water like all the other humans.

So the next thing I did was find the nearest lake so I could jump right in.

Didn’t last long in the water though.

For some reason I thought humans could breathe under water…Cough, cough.

Later that evening I went to go visit Steve at our usual spot.

I could not believe my eyes!

Only one day, and Steve was already rockin’ the Zombie life.

“How was your first day at Zombie life?” I asked him.

“Aw Bro, Zombie life is really cool!” Steve said. “I could really get used to this.”

“Really? I thought being a Zombie really stinks.”

“Well, the smell is pretty bad. But I think I’ve gotten used to it by now.” Steve said.

“How about you? How’s it going living my old boring life? Have you met those crazy villagers yet?

“Yeah, what’s up with that?” I said. “I thought you lived with your parents.”

“Well, you wouldn’t believe this, but I don’t know where I’m from.” Steve said. “I’ve lived with the villagers all my life. I’ve never even met my parents.”

“Didn’t you ask the villagers where you’re from?” I asked Steve.

“I did ask them.” Steve said. “They just said that one day I woke in their bed, and they have no idea where I came from.”

“There’s a lot of other stuff that’s gonna weird you out, just wait.”

Then we went our separate ways.

Man, I never looked that cool when I was a Zombie.

How does he do that?

As soon as I got home, one of the villagers says, “Whoa, you stink. You need to go take a shower and get that rotten meat smell off of you. You smell like you were wrestling with a Zombie.”

I actually liked smelling like my old self again.

Man, I was getting dizzy just trying to remember it all.

As I walked into the BA-FROOM, I walked past the mirror and I had to do a double-take.

I got a chance to see my face, and boy was it weird.

I had eyeballs, I had a nose, I had ears, and I had skin everywhere. I also had bits of hair on my chin.

Then I opened my mouth and I saw that I had like a million teeth! I looked like a shark.

Whoa.  What does Steve do with all of these teeth, anyway? I thought.

I wonder if humans really do eat Zombies, like in the movies.

Maybe I could practice being like Steve. So I tried making different faces…

So after I took my SHA-WUR, I went to bed.

“Steve, hurry up, or you’re going to be late for school.” The villager said.

I thought mining and farming was going to be hard. But trying to fit in at a human school is going to be impossible.

I mean, what do I wear? How do I act? What do I say to the other kids?

Will they even like me? What if they find out I’m really a Zombie in a Steve meat suit?

Man, I’ve only been a human for two days and my life is already filled with drama.

I looked in the closet for clothes to wear and I couldn’t find any.

Man, I thought only Zombies did that.

So I grabbed a shirt and pair of pants to put on.

I had a hard time putting them on until the villager walked in on me.

“Are you trying to put on new clothes on top of your old clothes?” The villager said. “You act like you’ve never worn clothes before.”

After he walked out of the room I took off my old clothes, and I couldn’t believe what I saw…

He didn’t have any holes, or patches where his guts hung out.

You couldn’t reach in and play with his stomach, or his intestines, or his spine, like I could do with my Zombie body.

Man, this is weird, I thought.

Then I threw on some clothes, and I went to school.

The village during the day was intense!

There were villagers all over the place.

It’s a good thing that the school was in the village. It was real easy to find.

But I thought the village was crazy. School was even crazier!

There were all kinds of kids in this place. There were skinny ones, fat ones, tall ones, and short ones.

And these kids weren’t wearing robes, they were wearing all kinds of crazy clothes.

One kid looked like he was wearing a porcupine on his head.

One girl looked like they used her face as a canvas for painting.

And there were a bunch of other kids that were almost as big as Mutant, but they had skin on them. I think they said they played a game called FOOT-BALL.

I even saw a Zombie at school!

But he had more meat on him than the usual living dead.

The weirdest thing I saw was that all the kids just hung out with those kids that looked just like them.

This was really different from my mob school back home.

All the mobs at my school hang out with different mob kids all the time.

That’s why me, Skelee, Slimey, and Creepy are best friends.

Tis the Season to Be Sinful by Adrienne Basso
Girl Act by Shook, Kristina
The Calling of Emily Evans by Janette Oke
Tied Down: He'll see to her needs, if she can tend to his... by Haven, Leila
Streets of Death - Dell Shannon by Dell Shannon
A Season for Family by Mae Nunn
ARE YOU LONESOME TONIGHT? (Running Wild) by hutchinson, bobby
The Boar Stone: Book Three of the Dalriada Trilogy by Watson, Jules
Monroe, Marla - Their Border Lands Gift [Men of the Border Lands 5] (Siren Publishing Ménage Everlasting) by Marla Monroe
Cherry Ames 04 Chief Nurse by Helen Wells