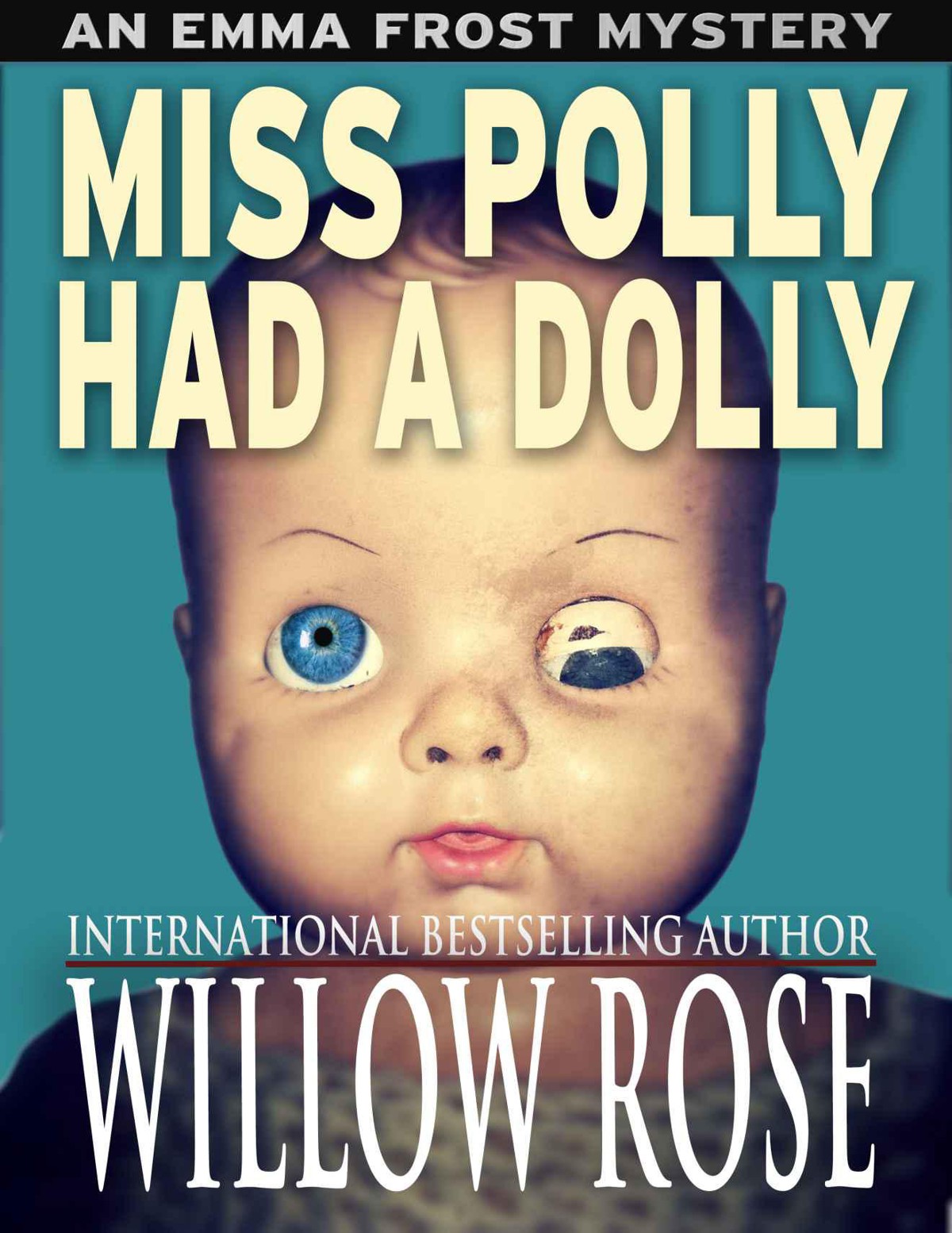 No part
of this book may be reproduced, scanned, or distributed in any printed or
electronic form without permission from the author.

This is
a work of fiction. Any resemblance of characters to actual persons, living or
dead is purely coincidental. The Author holds exclusive rights to this work.
Unauthorized duplication is prohibited.

Special thanks
to my editor Todd Barselow

Miss Polly had a dolly who was
sick, sick, sick.
So she phoned for the doctor to be quick,
quick, quick.
The doctor came with his bag and his hat
And he knocked at the door with a
rat-a-tat-tat.
He looked at the dolly and he shook his
head
And he said “Miss Polly, put her straight
to bed!”
He wrote on a paper for a pill, pill, pill
“I’ll be back in the morning with my bill,
bill, bill.”

Miss
Polly loved her dolly.
That's what she called her.
My Baby Doll
. Because her beautiful
daughter looked just like a doll with her blue sparkling eyes and long blonde
hair. And Miss Polly loved to dress her up, just like she was a small doll. She
had done it ever since the child was born, but now that she had turned six
years of age, she was beginning to resent her mother for doing so.

Pretty dresses weren’t currently in style
among little girls, and Miss Polly knew she soon faced the end of an era where
she was able to decide what her daughter should wear. It wouldn't be long
before her rapidly maturing daughter demanded to decide on her own. Miss Polly
knew that and therefore she tried to enjoy it while it lasted. This morning she
put three different dresses on her little girl and took pictures of her in all
of them. Each outfit complete with matching headbands, of course.

"The light blue one is the prettiest,"
she said and looked at her gorgeous daughter.

Miss Polly had never been beautiful or even
remotely pretty as a child, and her own mother hadn't cared about anything
other than teaching Miss Polly how to cook so she could be sent away as a
maiden at the tender age of thirteen.

So that was her excuse for dressing up her baby
girl every day, even if it was only to take her to the playground, like today,
and show her off to all of the other mothers.

"You ready?" she asked and put on her
hat.

Her daughter appeared behind her. Miss Polly
couldn't help but smile when she saw her. She walked to her and set her dress
straight and then washed a small smudge off her face by licking her thumb and
carefully wiping at it.

Miss Polly opened the door and let her daughter
walk out first. Then they started parading down their street hand in hand,
enjoying the many looks from neighbors and by passers whose eyes always smiled
when they landed on the little girl. Miss Polly could see in them how beautiful
they thought her daughter was and felt a thrilling sensation of pure joy in her
stomach.

Her little angel of a doll had given her many
hours of that kind of joy ever since she had come into her life. The father
they never spoke of. Miss Polly had told her to never ask about him, since he
wasn't important to either of them any longer. The fact was that he had run off
as soon as Miss Polly had told about the baby. At first he had told her that he
wanted her to take care of it, to terminate the pregnancy, but Miss Polly had
refused that with a snort. At age thirty-seven she knew this might very well be
her last chance to have a child.

"Then I don't want anything to do with
it," he had said angrily.

"You don't have to," Miss Polly had
answered. "We don't need you or any other man for that matter."

Then he got up from the kitchen table in the
small apartment that she had rented back then and left. She hadn’t heard from
him since, and she hoped she never would. They were doing fine on their own,
her and her angelic little girl. No need for a third party to ruin the fun.

"Three is a crowd," Miss Polly always
said. And it was so true.

When they reached the playground she felt the
other women's jealous eyes on her daughter. Miss Polly kneeled in front of her
and held her hands in hers.

"Now remember, no getting dirty in there.
You're wearing your prettiest dress. Pretty girls don't get dirty. Don't you
forget that, my child."

"But the other children..."

"You're not like those other children,
sweetheart. You're very special. Some day the entire world is going to admire
your beauty and when they do, you'll be prepared for it. Let them look at you,
but don't let them get too close."

"But how am I going to play if I can't get
dirty or get close to the other kids?" her daughter said with a petulant
whine.

"No. No. Pretty girls don't whine, either,
my lovely. Or frown for that matter. And don't crinkle your nose like that.
It's not becoming. You'll end up getting wrinkles at an early age. Remember,
it's all about keeping up appearances,
Baby
Doll
. Now go."

Miss Polly drew in a satisfied breath and looked
on as her daughter walked towards the playground in her ballerina shoes, taking
small feminine steps just like she had taught her to.

"This book
is based on
events that happened to me and my family
last year. It is the true story of those events in my own words."

I looked down at the cover of my book,
Itsy Bitsy Spider
, then out on the crowd
gathered in front of me. All eyes were on me, expecting me to entertain them,
explain to them what really happened and if it
really
could be true
? That was the question I got the most at these book
signings. People found it hard to believe that all this really had taken place,
that all this could have happened to one person, one family.

But it did. None of us had forgotten what
happened only six months ago when we were all almost killed by Fanoe Island's
first serial killer and now I had written a book about it. Only a month after
it had hit the stores, it had become a national bestseller much to my surprise.
Everybody loved the story and even if the critics hated it, I was selling a lot
of books around the country.

I opened the front cover and started reading out
loud. I had been all over the country in the last month doing book signings,
but this was a special one for me. This took place at the local bookstore in
downtown Nordbo, the town that had become my hometown after my grandmother died
and left me her house. I started reading out loud, thinking about my dad who
had promised me he would come to hear me today but hadn't arrived just yet, much
to my disappointment. Well, he knew the story the book was based on a little
too well, so maybe he would peek in later.

I spotted my son Victor and my daughter Maya in
the crowd. Victor didn't seem to enjoy being in the crowd too much. He suffered
from a form of light autism that the doctors couldn't quite place or put a
diagnosis on, but being in a crowd was among the things he didn't cope with too
well. My daughter Maya didn't look too pleased, either. On our way down here
she had explained to me that she found it so embarrassing that her mom was on a
poster outside the bookstore and even worse that I was going to be talking
about our family and what had happened. She hated the fact that I had written a
book with her in it and even more that everybody in the country seemed to have
read it.

"It's so embarrassing, Mom," she had
told me when I told her what the book was about. "Everybody is going to
know all kinds of stupid things about us. Why exactly do you feel the need to
tell them all these things about our family?"

"Because I'm a writer, that’s why. It's a
great story and I need to tell it."

I had changed the names, but still she had never
forgiven me for writing it. Not even when I told her that with the advance we
got I would be able to buy her a new iPad. She had never been easy to bribe,
unfortunately for me.

I read out loud from the first chapter of the
book that I was so proud of. I glanced up at the audience in between
paragraphs. As I did, I spotted Jack, one of my neighbors from across the road and
couldn't help but smile seeing him in the crowd. My friend Sophia, who also
lived across the road from me, was standing next to him, trying hard to hear me
read while two of her kids pulled her arms. She was carrying her newborn in a
sling on her front. She looked exhausted, but smiled anyway, which I thought
was quite the accomplishment having six kids and being alone with all of them.

I finished the reading then looked out at the
many people that had come to hear me. Then I smiled and nodded and received my
applause. It was mostly tourists I noticed, but that was no surprise to me,
since not many people from the island had liked the idea of me publishing this
book. I was constantly receiving remarks, especially from church people that
felt they were being put on display in my book, which I admitted they were, but
frankly that wasn't my fault. They had done some horrible things in the past
and some of them had paid for it with their lives. That was the story and I
couldn't change it.

"Now, I'll do book signings over by the
table," I said and moved over to the corner where the nice lady named
Isabella Petersen who owned the store had put up a table and a chair. She was
the first and only bookstore owner on the island who had dared to agree to a
book signing by me and I was very thankful to her for that. I had asked my dad
to bring her a basket of flowers and wine as a way of showing my gratefulness,
so I was getting anxious now that he wasn't going to make it.

A line formed in front of the table and I started
signing the books one by one.

After signing about fifty or so, I finally heard
my dad's voice behind me. He was out of breath when he spoke.

"Got the basket. I added some chocolate, I
heard she likes that," he said and put the basket down next to me. It was
nicely wrapped in cellophane. It was perfect.

"Where did you hear that?" I asked,
thinking that it didn't matter, all women liked chocolate, right?

Another reader put her book on the table in
front of me.

"Sign it to Gerda," she said with a
German accent.

"My new girlfriend told me."

"Your what?" I stopped signing and
looked up at my dad who was standing next to me and now I realized he was
flanked by a middle-aged woman with very red hair.