More Bedtime Stories for the Apocalypse 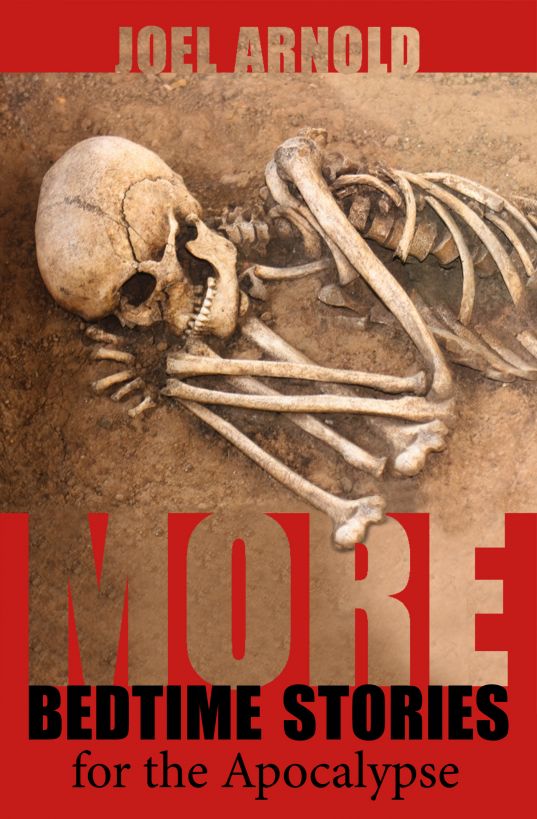 MORE
BEDTIME STORIES FOR THE APOCALYPSE

More Bedtime Stories for the
Apocalypse

All rights reserved. Without limiting
the rights under copyright reserved above, no part of this
publication may be reproduced, stored in or introduced into a
retrieval system, or transmitted, in any form, or by any means
(electronic, mechanical, photocopying, recording, or otherwise)
without the prior written permission of both the copyright owner
and the above publisher of this book.

This is a work of fiction. Names,
characters, places, brands, media, and incidents are either the
product of the author's imagination or are used fictitiously. The
author acknowledges the trademarked status and trademark owners of
various products referenced in this work of fiction, which have
been used without permission. The publication/use of these
trademarks is not authorized, associated with, or sponsored by the
trademark owners.

This ebook is licensed for your
personal enjoyment only. This ebook may not be re-sold or given
away to other people. If you would like to share this book with
another person, please purchase an additional copy for each person
you share it with. If you're reading this book and did not purchase
it, or it was not purchased for your use only, then you should
return to Smashwords.com and purchase your own copy. Thank you for
respecting the author's work.

For “Uncle Dan” Cleland; a fearless
storyteller who was always quick with a stump to sit on, a cold
beer, a thumbs up, and a laugh. Oh, my God, that laugh…

The Calendar in the Break Room

Last Seat on the Rapture Express –
2

The Soft Caress of Falling Bombs

Last Seat on the Rapture Express –
3

The Last Seat on
the Rapture Express - Intro

Take a seat. Have a blanket; this one ain’t
too moldy. So buckle up and hang on tight. We’ve got a long way to
go. The Rapture Express races across the land, its cars full of the
chosen. And
you
, pard’ are one of the bona-fide chosen.

Now
there’s
a scrapper. He fought
through a crowd of over two-hundred with just a machete and a
baseball bat. Used to play on one of them triple-A teams – the
Mudhens or something like that? Anyway, he fought through the whole
mess of ‘em, men, women, children, batting a thousand, beating a
swath right to yours truly. He even took a few bullets along the
way, but kept right on fighting his way to glory. A real
scrapper.

Now over there’s an interesting fella – the
one with the beard and ear buds? Don’t know what he’s listening to,
but here on the Rapture Express, that little i-Whatever never needs
recharging. Not now, not ever. He’ll soon figure out that his
little device has every song he could possibly want. That’s one
thing about the Rapture Express; it knows what you want before
you
do.

Anyway, that fella was out hitchhiking when
we found him. Had a cardboard sign that said ‘Heaven or Bust!’ So
we stopped and asked him if he wanted a ride. He fell to his knees,
tears pouring from his eyes, thanks and praises spouting from his
lips. He even asked me if I was Jesus.

And you? Yeah, you belong.

Those roped-off stairs? You noticed ‘em,
huh? Not everyone can see ‘em. They go up to the club car. Reserved
for those that can pay. Sure, money can’t buy you love, but it can
certainly buy you a first class ticket on the Rapture Express!
Wider seats, better food, and access to the club car. But lest you
think that unfair, not to worry – where
we’re
going,
everything comes out in the wash.

Look here, pard’ – no need to be nervous.
Sure, the ride might get a bit bumpy. You might see a few things
you ain’t never thought you’d see, especially on a bona-fide train
headed straight to the glory of all that is. Sometimes you might
even wonder if you’re on the right train; if we’re going to where
we say we’re going.

You’ll just have to trust me. Trust
us
. You belong.

See that young woman over there? The one
holding that hot pink day pack on her lap, rocking back n’ forth?
Now there’s an interesting case. Maybe I’ll tell you about her
later, when I come around again collecting tickets.

Anyhoo, if you see a few bodies pass by the
windows, don’t pay ‘em no mind. Those on the roof didn’t have quite
what it takes to get on board, so they’re hitching a ride up top.
But up there it’s a tad
slippery
, a tad
slick
, you
might say. And even if it wasn’t, at the speeds we get up to, you’d
need to grab hold of something pretty darn fast, and you better
have a powerful grip. Although I hear tell that some of them are
going to a few, shall we say,
extremes
to stay on top. They
can be a creative bunch when faced with eternity, whether that
eternity be heaven, hell, or a big ol’ gaping hole of nothing.

So just sit on back and relax. Want
something to read? Something to take your mind off of all the
excitement for a while? We’re all out of the Good Book. But here; I
found this under one of the seats. Don’t mind the stains. It
belonged to some fella who snuck on board without a ticket. We had
to send him up onto the roof. I don’t know how he’s faring. Maybe
he’s still up there, maybe he’s not.

But
you’re
here, and that’s what
matters.

Anyhoo, here you go. Looks like a book of
bedtime stories. Just the thing to put your mind at ease. So sit
back and relax. Enjoy the ride. And if you need anything along the
way, just holler.

What the fuck happened?

He heard the
shhhhhh
of the Rio
Grande in the distance. Hot desert wind blew dust over his prone
body and rattled the burrow weed and creosote bushes dotting the
landscape.

My pack
. He sat up frantically.
There, by his feet. He grabbed it. Unzipped it. The coffee cans
were still there, thank God. He pulled one out, opened it and stuck
his finger in the dark grounds. When he felt the tightly wrapped
brick of cocaine within, he sighed with relief.

What the fuck happened?

He’d never felt so swollen before. Had
something bit him? Something poisonous? A snake? A spider?
Scorpion? His tongue found a hole where one of his front teeth
should’ve been.

His skin itched like hell, and he pulled out
the collar of his shirt and looked down at his chest. When he saw
all of the pinprick-sized dots on his light brown skin, he
remembered the blinding light. He remembered the eye on the stalk
and the head it was attached to. He remembered the way the eye
looked at him.
And the mouth
. Oh God, the mouth…

Pete made the trip twice before. Worth it?
Hard to argue with a closet of old shoeboxes full of cash.
Twenties, fifties, hundreds, rubber-banded in stacks of twenty-five
or fifty, and after each successful trip, Pete’s uncle Allejandro
invited him inside the closet, opened a box at random and tossed
him one, two packs, flipped through a third and tossed that one to
him, too. “An extra for my favorite nephew,” he’d say. “You ever
want work, you know what to do.”

The cash was great. But the work…

He didn’t want to become dependent on the
quick fix of cash he received at the end of each trip. He didn’t
think
of himself as a drug mule. No. He wasn’t one of them.
He worked full-time in El Paso detailing cars. He paid his bills.
Rent and utilities he shared with two roommates. Food, gas. He had
the self-control to save up for a used car with the money he made
legally. But sometimes, that little extra bumper of money in the
bank made things a hell of a lot easier. Still, he didn’t want to
get greedy. He was putting his life on the line with each trip, and
he knew if he kept at it, eventually he’d get caught. Or worse.

But every once in a while…

He wanted to start taking classes at El Paso
Community College. He could spend another year detailing cars and
saving up, or…he could call up Uncle Allejandro over in Juarez,
chitchat a bit and ask if he had any work for him.

“
Why of course,” Allejandro would say.
“For you, Pedro, always.”

Then it was only a matter of crossing the
border into Juarez and taking a taxi to his uncle’s hacienda. The
guard outside the gate knew Pete and always greeted him with a warm
smile and a pat on the back (automatic rifle strapped over his
shoulder) and let him in.

At least the trip
to
his uncle’s was
simple. The trip back to El Paso…not so simple.

There’d been a tunnel at one time, but that
had been compromised before Pete had ever set foot in it, and now
Allejandro smuggled coke across the border the old-fashioned way;
hiring mules to sneak it over the border to waiting trucks.

Since this was his third trip, Pete was more
prepared than he’d ever been. He had a pair of night-vision
goggles; not only helpful for spotting border patrol agents, but
also for spotting snakes and other creatures. He didn’t really mind
snakes so much – he had a pet boa at home. But he didn’t want to
get bit by anything poisonous while making his way to the Rio
Grande. That would make for a bad night. And the goal was to have
as many good nights as possible.

The two-kilo bricks of cocaine were wrapped
tightly in plastic and placed in coffee cans. The extra space in
the cans was filled back up with coffee grounds. Pete carried two
cans in his pack, along with a gallon of drinking water and some
protein bars. His uncle had pointed out on a map where the Rio
Grande ran shallow, and one of his uncle’s men drove Pete over back
roads in the Chihuahuan Desert and pulled off onto a barely visible
trail. Even the driver had to check and double-check that he was on
the right path. He finally stopped and nodded at Pete. “Buena
suerte.”

The sky was cloudless, the stars painfully
bright. There was no moon. He lowered his night vision gear over
his eyes and saw the green silhouette of a coyote loping through
the darkness.

He walked carefully over the baked, cracked
ground. Didn’t need a broken or twisted ankle, either. It wasn’t
like he could drag himself to his destination. He had his smart
phone, complete with compass and g.p.s. apps, and if he had to call
his uncle, so be it. Even out here, he could get a signal on his
phone.

The Subterraneans by Kerouac, Jack
The Town by Bentley Little
White Collar Wedding by Parker Kincade
Cobweb by Margaret Duffy
The Collected Stories of Colette by Colette
The Bastard of Istanbul by Shafak, Elif
the Thundering Herd (1984) by Grey, Zane
Sleeping Beauties by Susanna Moore
Frank's Independence Day (The Night Stalkers) by Buchman, M. L.
Götterdämmerung by Barry Reese