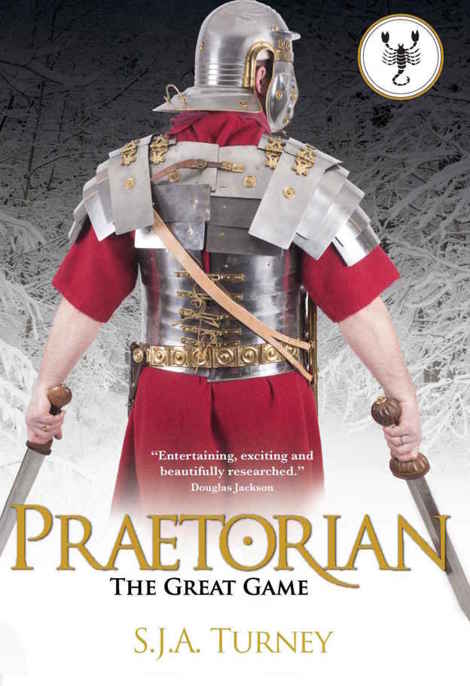 I would like to thank those people instrumental in bringing Praetorian: The Great Game to publication and making it (hopefully) a great read: Jenny and Lilian for their initial editing, Tracey and my kids for all their support, and Sallyanne Sweeney, my agent, whose tireless efforts thoroughly transformed this book. And, of course, various beta readers who have been with me for years, tweaking my work and improving my tale-telling.

All internal maps are copyright the author of this work.

Published in this format 2015 by Mulcahy Books

The author asserts the moral right under the Copyright, Designs and Patents Act 1988 to be identified as the author of this work.

All Rights reserved. No part of this publication may be reproduced, stored in a retrieval system or transmitted, in any form or by any means without the prior consent of the author, nor be otherwise circulated in any form of binding or cover other than that which it is published and without a similar condition being imposed on the subsequent purchaser.

‘A nation can survive its fools, and even the ambitious. But it cannot survive treason from within.’

I – Blood in the snow

II – The city at the edge of the world

III – The man who rules the world

IV – The giving and taking of great things

V – Grief in many forms

VII – The wonders of Rome

XXI – The turning of seasons

I – Blood in the snow

THE men of the Tenth Gemina Legion stomped through the crisp undergrowth, their boots scraping and catching on brambles, grateful that the snow was scarce due to the thickness of the forest canopy even at this time of the year. On the open ground, where the battle had been fought, a thick white blanket had lain with virginal purity until the four legions of Rome had consecrated it with blood.

Gnaeus Marcius Rustius Rufinus cursed as his foot caught a hidden tree root and he almost fell flat on his face. His remaining five tent-mates grinned at his near-accident and he felt himself flush slightly, the reddening of his cheeks partially hidden by the ruddy tint brought on by the bone-chilling cold, and partially of the mud and blood spattered across his face.

The terrain here beyond the borders of Pannonia was nothing like the lands around the family holdings near Tarraco. Back home the trees were charming, the floor beneath them a comfortable carpet of brown needles. Here they stretched up forever like yawning demons and curled their toes into traps, hiding endless menaces, most of which were poisonous or carnivorous.

How could people live here?

‘Good job you’re lighter on your feet in the arena’ one of the others quipped, raising another chorus of laughs. As the unit’s inter-century boxing champion he maintained a reputation as a man of stealth, speed and power; at least to those who didn’t periodically see him open doors into his face or become entangled in benighted roots.

Pausing to correct himself, he stuck his bloodied blade into the ground, wincing as it grated on a hidden rock, causing damage that would take hours of polishing to repair. As he rubbed his sore ankle, he examined his reflection in the reddened steel. He looked tired; and dishevelled. His neat, old-fashioned hairstyle had grown out into a shaggy mane, coiling ironically into a fairly fashionable curled look. His habitually smooth chin had grown into such thick stubble it could almost be considered a beard. The dimple that had won him the attention of pleasant young ladies of good lineage and low morals in Hispania was no longer visible.

He looked as though he’d been roughing it his entire life; felt like it too.

The army that the Emperor had used to smash the Quadi at Laugaricio had been the largest fielded in living memory. Nine legions and a veritable sea of auxiliary units, all supported by cavalry and artillery - enough men to conquer an Empire. After the failure of the last war to keep the tribes subdued, the great Marcus Aurelius was determined to put them down for good.

Perhaps a quarter of the Quadi had managed to escape Laugaricio and had re-formed further east in a last, desperate attempt to halt the inevitable, crushing advance of Rome. The Emperor had sent almost half his force, under the command of the Praetorian prefect, to finish the job, while he himself retired to the relative comfort of Vindobona.

And so the Tenth, along with the Fourteenth Gemina and the Second and Third Italica, had marched four days east until they caught the Quadi in a wide, gently-sloping valley surrounded on two sides by thick forest. The battle had been short and brutal and the survivors had fled into the woodland, seeking a way to escape the reaching arms of the great Aurelius.

The commander, at the rear and surrounded by his white-clad guardsmen, had refused them any quarter - his orders had been clear: wipe them out. No more fleeing survivors banding together to foment rebellion.

The Fourteenth and Second had been sent into the northern woods, the Tenth to the east, to hunt down the survivors, butchering every last man they could find, units of Praetorians moving around the countryside between them to keep order. The Third had remained in the valley, mopping up… better here in the woods, hunting fleeing barbarians, than having to gather their bodies into piles for burning.

The cornu blew in the distance, a strange, sad muted sound, as though some animal were caught in a trap, hollering out its fear and pain. The notes were the legion’s recall, repeated for the fourth time in quick succession. The legionaries had done their job as well as any man could be expected in such conditions, and Rufinus’ century alone had dispatched more than a hundred survivors in the woods.

With a sigh, Rufinus let his foot fall to the ground and drew his blade from the sucking earth. Sure enough, a notch had appeared near the tip. At least two hours of polishing, that!

His companions were already a score of paces ahead of him among the boles of the trees, almost out of sight as they moved to reunite with the legion. Cursing his lack of dexterity, he picked up the pace, his eyes fixed on the ground to avoid falling foul of another root.

Astonishingly, he spotted the enemy without them having heard his clumsy approach. His heart racing, Rufinus came to a halt and ducked behind the trunk of the largest tree he could find. Taking a deep breath and nibbling his lip, he glanced sharply around the bole.

Three men were crouched in a natural depression, almost hidden by foliage. Two wore furs wrapped around their torsos for protection from both sword and cold. The third had a mail shirt of surprisingly quality and wore a helmet which looked suspiciously like a Roman cavalry helm with the face-plate removed. The two fur-clad men had short-handled axes tucked into their belt and their leader, as he appeared to be, a sword with an ornate hilt. None of these weapons were drawn, however, as the three sat with bows to hand, arrows jammed into the earth beside them.

Were they waiting quietly for something? Or just hoping to evade the Roman forces and live to fight another day?

Rufinus ducked back behind the tree and rolled his eyes. What a fix! It was possible that he could deal with all three, particularly given that they had no melee weapon prepared, but it would be a tough fight and, if three had managed to so far evade Roman pursuit and hide here, it was quite possible they were not alone and that other groups lay hidden nearby.

To attack them might be kicking a hornet’s nest.

He could try and run ahead as quietly as he could and catch up with the other five men from his contubernium; bring them in on the fight. It would certainly be safer. But the others were now far ahead. Even if he caught up with his companions and they decided to help, there was a good chance he would be so turned around by the endless woodland that he would not find them again.

One of the barbarians nocked an arrow and stretched the bowstring, testing its strength. Satisfied, he jammed the arrow back in the ground, replaced the bow and fingered the blade of his axe as the three men said something very quietly in their guttural language, laughing in a subdued manner.

Rufinus sighed. He would have to do it himself.

Taking a deep breath, he raised his gladius. At least it was already drawn and there would be no tell-tale rasp of the scabbard. He leaned around the bole of the tree again and suddenly tensed. One of the men seemed to be looking directly at him! As the man’s gaze wandered away and he fell into further low conversation with his companions, Rufinus tried to suppress an explosive exhale.

Setting his right foot against a good solid rock, he took a deep breath. There was no chance of sneaking up on them; he’d been lucky to get this far unobserved. Offering up a necessarily brief and fervent prayer to Mars Capriociegus, he tensed and launched himself from the rock with every ounce of strength he could muster.

The three Quadi warriors glanced up in surprise, woefully unprepared, at the sound of running footsteps. By the time the first man had turned to identify the source of the noise, Rufinus was on him. As he ran, lacking his shield, which had been broken back in the main battle, he raised his arm as though to protect himself. As Rufinus smashed into the warrior, his elbow caught him in the throat. The force with which he hit knocked the man flat and, the training of the legion taking over, he had plunged his gladius deep into the man’s chest before he realised that the initial collision had already snapped the man’s neck.

The other fur-wearing warrior, realising he had no time to draw his weapon, leapt forward to contain this sudden threat. The man was big, built like an ox, so covered in thick curly brown hair it was difficult to tell where pelt ended and man began. A broad chest was flanked by muscular, powerful arms that closed to enfold Rufinus.