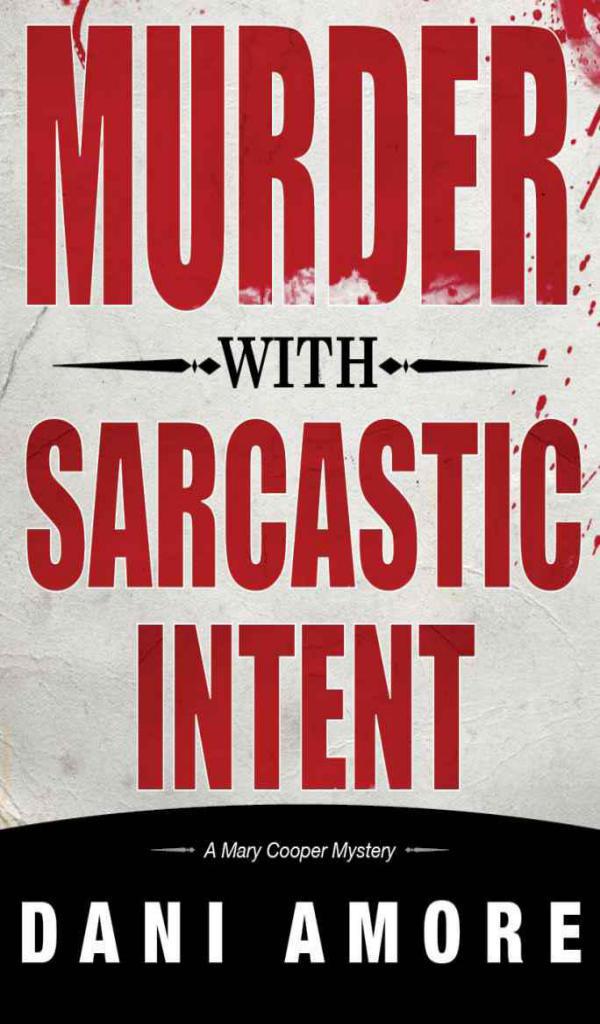 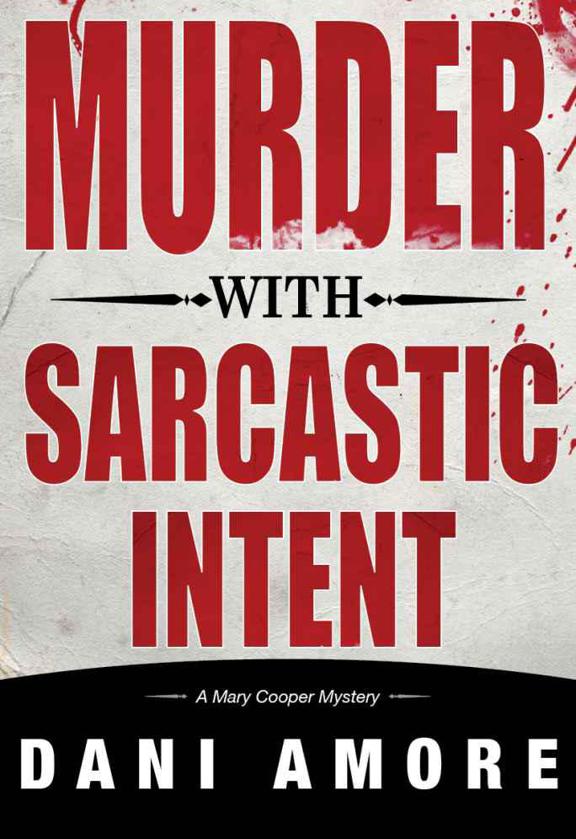 MURDER WITH SARCASTIC INTENT is a work of fiction. Names, characters, places, and incidents either are the product of the author’s imagination or are used fictitiously. Any resemblance to actual persons, living or dead, events, or locales is entirely coincidental. All rights reserved. No part of this publication may be reproduced, stored in a retrieval system, or transmitted, in any form or by any means, electronic, mechanical, photocopying, recording, or otherwise, without prior written permission from the author.

PRAISE FOR
DEATH BY SARCASM

WINNER OF THE 2011 INDEPENDENT BOOK AWARD FOR CRIME FICTION

“Mary Cooper is tougher than Stephanie Plum, smarter, and would reduce her to tears in under 30 seconds with her sharp tongue.”

“A welcome shot of estrogen into the private eye genre.”

“For those who like a mystery with twists and turns,
Death By Sarcasm
is a breath of fresh air.”

“Packed to the gills with hard-hitting action and a non-stop plot.”

“What I claim is to live to the full the contradiction of my time, which may well make sarcasm the condition of truth.”

She awoke in darkness.

Her head felt like it had been split open. Her neck throbbed, her jaws ached. The blindfold pressed into her eyes. She gagged on the cloth that was jammed into her mouth. With her hands tied behind her back, she sat on a cold floor leaning against a wall. Her butt was numb, and her legs ached with cramps.

She closed her eyes. How long had it been? She remembered her bed, a vague dream about dancing with a movie star, a man in black crashing into her room, an incredible weight on her chest, and a horrible, chemical smell burning her nose.

She needed to go to the bathroom.

The tears came—they felt hot on her face. She had been crying off and on for hours. Each time her blindfold dried, she cried again, turning it soggy.

Her nose dripped and pooled on her upper lip in a depression caused by the binding of the gag.

The same thought kept popping into her head, try as she might to stop herself from asking it over and over again.

What were they going to do to her?

The unknown answer caused her heart to hammer in her chest. A beating? Rape? Murder?

She leaned back and pushed against the wall, struggled to use her legs for leverage to stand up. She started to slide to her left, caught herself, and slowly pushed upwards. It took all of her effort, the muscles in her thighs burned.

But she made it all the way up.

She stood, feeling dizzy and shaky.

And then from what seemed less than five feet away, she heard a sound that made her freeze.

Mary Cooper spread her hand across the manila envelope on the desk. She eyed the woman sitting opposite her.

“I’m terribly sorry, but I have to tell you your husband is sleeping with his surfing instructor,” Mary said.

Mrs. Randolph Jenkins III raised her head, as if she wanted the next punch to land right on her chin. She was a regal woman, with an elegant face and small lips.

“I am not surprised,” Mrs. Jenkins said. “Betrayed, yes. Surprised, no.”

Mary said, “I have photographic evidence if you are interested.” Indeed, the photos were some of Mary’s finest work. She’d spent hours climbing the bluff behind the surf instructor’s home to get into range for the zoom lens.

The woman stared at a distant spot somewhere outside the window, into the haze of a Los Angeles morning.

“Yes, I believe I would like to see the evidence,” she said, her voice dry and crisp, like the twenty one-hundred-dollar bills she’d paid Mary a week ago.

The sigh that nearly escaped Mary’s lips was stifled before it could make any noise. They always wanted to see the pictures, she thought. Always, always, always. Salt in the wound.

Mary slid a finger beneath the envelope’s clasp, popped it open, and pulled out the stack of eight-by-ten, black-and-white glossies.

She turned the photos toward the woman. The first image, Mary knew, was of Mr. Randolph Jenkins III straddling his male surf instructor’s very large erection.

“He does like the longboard,” Mary said. She immediately cursed herself. Dammit! She was really working on her customer service skills and that comment was the exact opposite of the behavior she needed to exhibit.

Mrs. Randolph Jenkins III flipped through the rest of the photos before pushing them back toward Mary.

“Well, your husband was good at hiding the truth,” Mary said, and then, before she could stop herself, added “along with the salami.”

What good was holding your tongue, if when you unleashed it, the damn thing had a mind of its own?

“Your private investigator skills are clearly well-developed,” the woman said. “More so than your tact.”

The woman held up her hand. Then she scratched out a check and handed it to Mary.

The older woman picked up the stack of photographs, slid them back into the envelope, and put it into her purse.

“Your notes and case details will be available should you be called to appear in court, am I correct?” she said.

The woman went to the door.

“We’ll really nail him in court,” Mary said. “Totally bend him over.”

As soon as the words passed her lips, Mary winced and closed her eyes.

When she opened them, the woman was gone … along with any shot at a referral, Mary noted with confidence.

LAPD Homicide Detective Jacob Cornell dropped the stack of apple crates he was carrying and hurried toward the director. In film production, “PA” stood for Production Assistant—the lowest of the low, but perhaps the most essential workers on a film crew. They were glorified gophers.

“Quit standing around with your thumb up your ass and bring me the lens case,” the director said. His name was Morrison. “NOW!” he added.

Morrison—just the one name of course—was one of the top pornography directors in Los Angeles, and he was a little guy. He had short, stunted legs, with a muscular upper body and a big, blocky, square head. Jake thought he probably had a touch of dwarfism, combined with plenty of weightlifter’s steroids. And he had a personality to match: sort of a Napoleonic Complex with a side of ‘Roid Rage.

Short straw, all right
, Jake thought, as he hurried up to Morrison.

“It’s—” Jake started to say, ready to give his undercover name, which was Gary Mazier.

“I’ll tell you what it is,” the director interrupted him. “It’s Drag Ass. Because you’re too fucking slow, Drag Ass.”

Jake’s hand inadvertently went to where his gun holster would be, the idea of shooting this little man-child blossoming in his mind.

Unfortunately, Jake didn’t find the gun. He handed the case of lenses to Morrison resisting the urge to clobber the Keebler elf over the head with them.

The little man snatched it from Jake’s hand and turned to the camera.

Jake walked back to his pile of light reflectors and stands and thought how glad he was Mary Cooper wasn’t around to hear this crap. God, she’d have a field day with it.

The thought of Mary made him smile. She was a handful. A smartass to end all smartasses. But she was
his
smartass, even if she didn’t want to admit it.

A lot of people failed to see through her shield of sarcasm, but he could. And he liked what he saw.

Jake opened the door to a storage room and was met by a big security guard. He put his hand on Jake’s chest and pushed him back out the door.

“Never mind. Nothing here for you to see.” Jake looked at the man’s T-shirt. It said “Venice Security.” Under that, was the name “Paolo.” Jake thought about it. He was here to ostensibly find out if this production company, which was really a compendium of different companies, might be using minors as on-camera talent.

Whatever might be behind storage door number one, he decided to let it go for now.

“Any time, Drag Ass,” the security guard said with a smirk.

Jake walked back to his gear. He was really starting to hate this assignment.