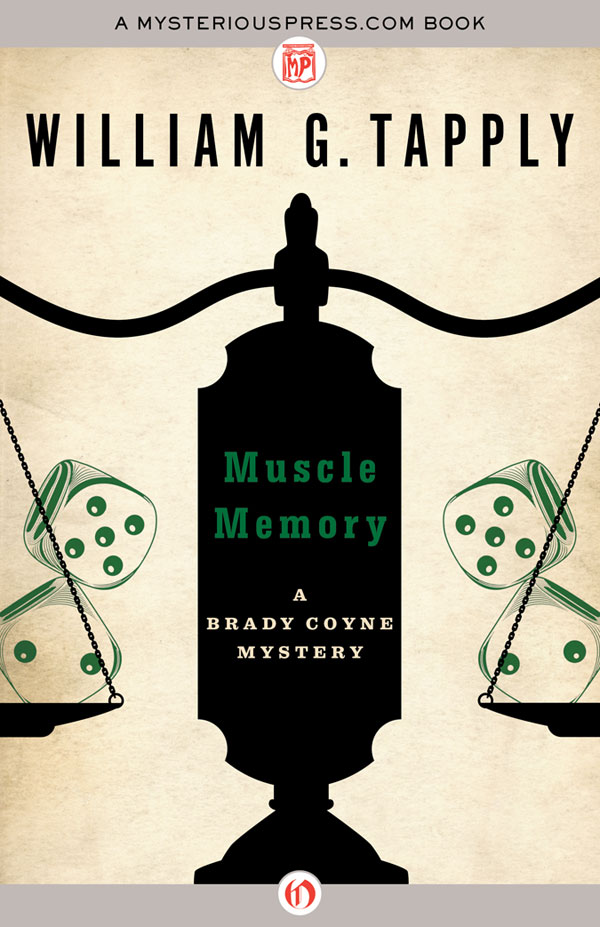 To my students—past, present, and future—who always challenge and inspire me, and who help me to remember that there are more important things a person can do than make up stories.

A
TYPICAL FEBRUARY TUESDAY
evening in Boston—hard, wind-driven snow in the air, slushy sidewalks underfoot. But it was cozy and dry at Skeeter’s Infield, my favorite hangout down the alley in the financial district, halfway between my office in Copley Square and my empty apartment on Lewis Wharf on the Harbor.

Since Alex and I split back in September, I’d found myself stopping off at Skeeter’s on my way home from work more regularly than was probably healthy.

I’d had one of Skeeter’s famous burgers and a stack of onion rings, and now I was lingering over a Sam Adams draft watching a college basketball game on the big television over the bar. Mick Fallon had taken the stool next to me. Mick was a hulking middle-aged guy, a giant of a man who’d once played power forward for the Detroit Pistons, one of the many ex-athletes I’d run into a few times at Skeeter’s. On the other side of me, two pretty thirty-something loan officers in business suits and short skirts—Molly and Joanne were their names—were sipping white wine and yelling at the television. Molly was the lanky brunette, and Joanne was the stocky blonde.

Mick was leaning across in front of me explaining the pick-and-roll to the women, and I didn’t notice when the two men in silk suits came in and took the stools down at the other end of the bar until Mick jabbed me in the ribs with his elbow, jerked his head in their direction, and whispered, “Watch out for those two.”

Skeeter was standing behind the bar with his arms folded across his chest. Skeeter O’Reilly had been a reserve infielder for the Red Sox back in the early seventies. He was a tough little monkey who’d known how to take an inside pitch on the ass and steal a base, and he’d hung around baseball until he blew out his knee trying to break up a double play in the late innings of a meaningless September game that the Sox were losing by seven runs.

One of the guys in the silk suits was bending over the bar toward Skeeter. “Don’t gimme this crap,” he was saying. “Me and Paulie want a fuckin’ beer.” He looked to be in his late twenties. He had black hair and black eyes, black five o’clock shadow and a big black mustache, with a salmon-colored necktie and a matching show handkerchief in his breast pocket. His thick, corded neck and bulky shoulders suggested a narcissistic devotion to Nautilus machines. His companion—Paulie—could have been his twin, except he was clean-shaven and his necktie and handkerchief were turquoise.

Skeeter was shaking his head. “You better watch your language, Patsy,” he said evenly. “Anyways, you ain’t welcome here, and that’s how it is and you know it. I don’t want no trouble, and neither do you. So just get out, okay?”

“What?” said Patsy, jerking his thumb in our direction. “You only serve hookers and washed-up old jocks? We ain’t good enough for this dump?”

Skeeter shrugged. “You better leave, both of you, before I call the cops.”

Patsy glared at Skeeter for a minute. Skeeter stared right back at him. After a minute of that, Patsy glanced in our direction and grinned, as if he wanted to be sure that we were watching. Then he turned to Skeeter, nodded, and settled back on his barstool. “No need for cops,” he said. “No hard feelings, huh?” He hooked his finger at Skeeter. “Come here,” he said. “I wanna tell you something.”

Skeeter shrugged. He unfolded his arms, wiped his hands on his rag, and leaned across the bar toward them.

Patsy smiled and patted Skeeter’s cheek. Then suddenly his other hand shot out, clamped onto the front of Skeeter’s shirt, and yanked the little guy off his feet so that he was half-sprawled on the bartop. Patsy shoved his face into Skeeter’s. “Okay, you little fuck,” he hissed. “Now you listen to me—”

Beside me I heard Mick growl “Sonofabitch,” and the next thing I knew he was looming directly behind Patsy and Paulie. He grabbed each of them by the scruff of the neck, hauled them backwards off their barstools, and dragged them toward the door.

“Hey, Brady,” said Mick. His voice was calm, but fury blazed in his eyes. “Gimme a hand here. Help me take out the trash.”

I got up, went to the door, and opened it. Patsy and Paulie were both full-grown men, but Mick stood about six-seven and weighed close to two-eighty, and in his grasp they looked like a pair of plucked chickens being taken to slaughter by a big red-faced butcher. His huge paws nearly encircled their necks. They were gasping and flapping their arms in the helpless, doomed way a freshly caught trout flops his tail in the bottom of a canoe.

Mick flung them outside one at a time. First went Patsy, who landed on his feet, staggered across the narrow alley, and smashed against the brick wall. Paulie followed, skidding on his knees and then sprawling facedown on the hard, dirty old snowbank.

Patsy stood there rubbing his neck, sucking in deep breaths, and trying to look fierce. “You don’t know who you’re fuckin’ with,” he said.

Paulie slowly stood up, brushed off his pants, and turned to Mick. “You know who our boss is?”

Mick grinned. “You know where to find me.” He stepped inside, took two camel-hair topcoats off the coatrack, pretended to sniff them, then threw them out into the alley. “These must be yours,” he said. “Same stink.”

He slammed the door shut and returned to his barstool. I followed him.

Skeeter came over rubbing the back of his neck. “You shouldn’ta done that, Mick. You know who those guys are?”

“Well, I don’t know,” said Molly, the brunette loan officer. “Who are they?

“Wait a minute,” she said. “You mean
the
Vinnie Russo? That godfather guy from the North End?”

“God,” she said. “He assassinates people.”

“Not him personally,” said Mick. “He has guys like Patsy and Paulie do it for him.”

Molly turned to me. “I heard what that man said. You’re a lawyer. Can those—those hoodlums really sue him?”

“Anybody can sue anybody,” I said. “It’s the American way.”

“They’d be more likely to shoot him,” said Skeeter.

Mick grinned. “I think Paulie’s nice suit got ripped, and Patsy did bump his head against the wall. Wouldn’t put it past ’em to strap on neck braces and take me to court.” He looked at me with his eyebrows arched. “I don’t have a lawyer.”

I shrugged. “So it would be unethical.”

Mick grinned. “Holy shit,” he said. “A lawyer with ethics. You got a card?”

“Sure. But if you’re worried about those two goons…”

Mick waved his hand. “You never know when you might need a lawyer with ethics, that’s all.”

I fished a business card from my wallet and handed it to him.

Molly clutched my arm and looked up at me. She had green eyes, I noticed. They crinkled when she smiled, as if she’d spent a lot of time outdoors. “Can I have one?” she said.

“You need a lawyer with ethics, too?”

I gave her one of my cards. She looked at it, tucked it into her purse, then smiled up at me with her eyebrows arched…

And it wasn’t until I was halfway home that I realized she’d expected
me
to ask for
her
business card.

I hadn’t played those games for a long time.

I had showered and brushed my teeth, and when I opened the bathroom door I heard a woman’s voice in my bedroom. My first—irrational—thought was that Alex had changed her mind, driven down from Maine, and snuck in while I was in the shower, that she’d decided she couldn’t stand living without me after all, and it took me a minute to realize the voice was coming from the answering machine on the night table beside my bed.

“…asleep? Well, I didn’t mean to wake you up. I was just thinking how I really need a lawyer.” It was Molly, the pretty loan officer from Skeeter’s. “Hey, Brady,” she said, “pick up the phone. I’ve got a really good idea I want to run past you.” She paused. “Come on. You’re listening, aren’t you?”

I sat on the bed, reached for the phone, hesitated, then pulled my hand back.

“Oh, well,” she said after a moment. “At least maybe you’ll call me sometime, huh?” She recited a phone number. “I was just thinking,” she went on, “you might like a home-cooked meal. Believe it or not, I’m a pretty good cook. I heard you and Mick talking—I didn’t mean to eavesdrop, but I couldn’t help it—and I know you’re divorced. Well, ta-da, me, too.” She laughed quickly. “God, I feel like a jerk. I shouldn’t have called. Stupid me. Oh, well. Too late now. So you’ve got my number. I’d love to hear from you. I really would. Every ethical lawyer needs a new client now and then, right?” She paused. “Wow. This is embarrassing. Call me? Please?”

She laughed again before she disconnected.

I liked Molly’s laugh. It was low and throaty and intimate. I remembered the way her eyes crinkled when she smiled.

I watched the message light blink for a minute. Then I reached over and hit the erase button.

I
HAD SWIVELED MY
office chair around so I could gaze out at a sun-drenched April morning. My window onto Copley Square looks east across the plaza to the dark-stoned, dour old Trinity Church, which crouches in the shadow of the sleek, glass-sided John Hancock Tower rising behind it. The old and the new Boston in counterpoint.

The view from my office window takes in a lot of concrete and steel and glass and enterprise. It barely qualifies as “outdoors,” but on a pretty spring morning it’s good enough to get me daydreaming about casting dry flies to rising trout, which is what I was doing when Julie buzzed me.

I rotated back to my desk and picked up the phone. “Yes, boss?” I said.

“He says he needs a lawyer. You’re the lawyer around here. Why don’t you ask him?”

“Good plan.” I hit the blinking light on my telephone console and said, “Mick? How’re you doing?”

“Not good,” he said. “Not good at all. Actually, I am one miserable old jockstrap, Brady. I gotta talk to you, man.”

The Executioner by Chris Carter
The Dracove (The Prophecy series) by Gervasio, N.L.
Remember this Titan by Steve Sullivan
Bearing My Soul: A Paranormal Werebear Shifter Romance by Graves, Ellen
The Dells by Michael Blair
At Risk by Alice Hoffman
The Healer's Kiss: Book Four of the Forced To Serve Series by Donna McDonald
Black Flame by Ruby Laska
Of Wings and Wolves by Reine, SM
The Billionaire's Beautiful Mistake (Bold Alaskan Men Book 1) by Elizabeth Lennox