Mystery of the Hidden Painting 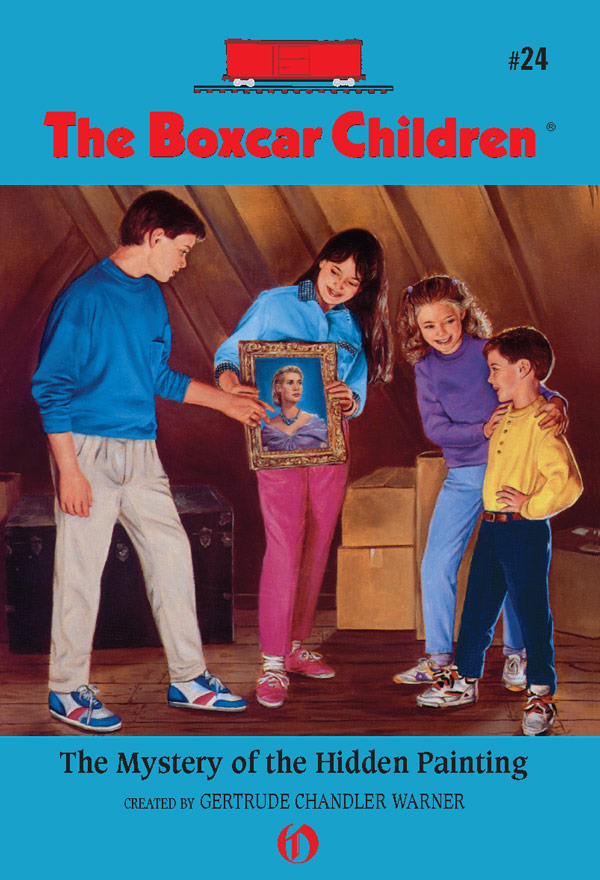 The Mystery of the Hidden Painting

T
he Alden children, Henry, Jessie, Violet, and Benny, ran out of their grandfather's house, laughing. They raced each other to the nearby garden with a fountain in the middle near where their boxcar stood.

Henry, who was fourteen and the oldest, reached the boxcar first and pulled open the door. Jessie and Violet got there next, at the same time. They turned and watched six-year-old Benny, puffing in the hot August sun, catch up with them.

“It's not fair,” Benny said. “I'm always going to be the youngest and
never
win a race with you.”

“Someday you'll beat even Henry,” Violet said reassuringly. Though she was only ten she often seemed more considerate than many older people.

The children climbed into the boxcar, followed by their dog, Watch, and looked around.

Henry got the broom Jessie had made when they had all lived in the boxcar, and started sweeping the floor. “We haven't been in here for a while. That's why it's so dusty. But I like it anyway.”

Jessie smiled and spoke in the voice she used when she wanted to sound older than twelve. “Remember when we ran away and lived here after mother and father died? I think I can remember every day. Remember how we hid from Grandfather?”

“Yes,” Benny said, “because we thought he was mean and we wouldn't like living with him.”

“And look how wonderful and kind he is,” Violet said. “And how happy we are with him.”

“That's why we're here,” Henry said. “Because we love him and want to plan a wonderful party for his birthday next month. We have a lot of work to do.”

“Let's get started then,” Jessie said. “It's awfully hot in here.”

“Hungry,” Violet finished for him. She reached for the basket she had brought with her. “Mrs. McGregor packed a little snack for us.”

Jessie went to the shelf that held the dishes they had found and used when they lived in the boxcar. She took four cups.

But Violet said, “We only need three. I brought Benny's cup from the house. I couldn't forget Benny's cup.”

Benny took a cracked pink cup from the basket and held it out. Henry lifted out spice cookies and a carton of milk and filled Benny's cup. Jessie took peaches and plums and put them in a bowl. Then she piled bananas on top of the fresh fruit.

The boxcar was exactly the same as it had been when the children had lived in it, except that Mrs. McGregor had given the children four plump, brightly colored cushions so they could sit on them on the floor. Now they got comfortable and chewed on the delicious cookies.

“Well,” Jessie asked, “what should we do for Grandfather's party?”

“We have to have a cake and ice cream,” Benny said positively. “You can't have a birthday party without a cake.”

Violet laughed. “I knew you'd say that. Well, I'll play the violin for Grandfather. I'll be glad to do
that.
I'll have to think about what to play.” 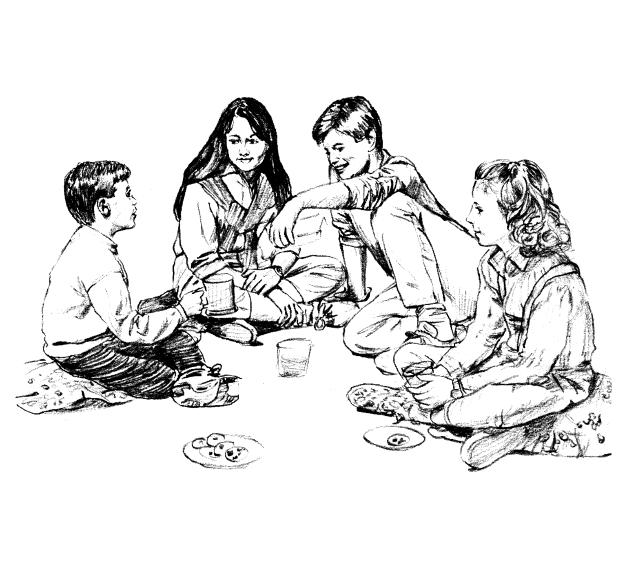 “I think I'll write a poem,” Henry said. “We were studying poetry in school at the end of the term. I'll be able to put what I learned to good use.”

“We have to buy him a present, too,” Violet said. “What should it be?”

The other children laughed. Henry said, “I saw Grandfather looking at a sweater in Barlow's Men's Shop last week. I think he liked it. We could all chip in, and I'll buy it.”

“I don't have much money,” Benny said, thoughtfully. “I won't be able to pay my share.”

“We'll work all that out, Benny. Don't worry,” Jessie said, patting his shoulder.

Violet suddenly jumped up. “I know. Let's dress up for the party.”

“You mean I have to wear a tie?” Benny asked mournfully.

“No,” Violet said. “I mean dress up in costume. There are all kinds of old clothes in the attic. We could use those. It will be like a masquerade. Grandfather would love it. I know it.”

Henry made a face. “I don't know. Dressing up is sort of childish. Don't you think?”

“No!” Violet and Jessie said at the same time.

“Come on,” Jessie grabbed Henry's hand. “Let's go up to the attic right now. I know you'll like dressing up.”

They ran back to the house and into the front hall. Watch raced in after them. Mrs. McGregor came out of the kitchen with flour on her hands and nose. “What's all the excitement about? Where are you all off to in such a hurry?”

“We're going up to the attic so we can find dress up clothes for Grandfather's party,” Violet said, catching her breath.

“What party? What's this all about?” Mrs. McGregor asked.

“We'll tell you later,” Jessie shouted as they all ran for the stairs.

“Open the windows up there. It must be a hundred degrees in that attic,” Mrs. McGregor called after them.

Violet was already poking around. She found an old, big straw hat and tried it on. She ran to a standing mirror and giggled at her image.

“It's just right for you,” Jessie cried. “It's lavender. Your favorite color.”

Henry found a velvet coat and slipped into it. “How about this?”

Benny had opened a trunk and was pulling out old toysâblocks and balls and a jump rope and a jack-in-the-box. “I like it up here. I'm glad we came.”

Jessie was now standing silently in a corner with her back to her brothers and sister. Violet looked at her. “What did you find, Jessie?”

Slowly, Jessie turned around. In her hands she had a small painting in a carved gold frame. “Look, how beautiful this is,” she said.

Violet put down the hat and moved toward Jessie. “Ooh, you're right, she is beautiful,” she gasped. “I don't think I'd ever get tired of looking at it.”

The painting was of a lovely young woman in an evening gown. Around her throat was a necklace of sparkling blue sapphires that matched her eyes. The woman was staring out of the picture with wide eyes, and she had a small smile on her red lips. She looked very happy.

“Who do you suppose she is?” Benny asked.

Henry moved closer to the painting. “She looks like the pictures Grandfather has shown us of Grandmother.” 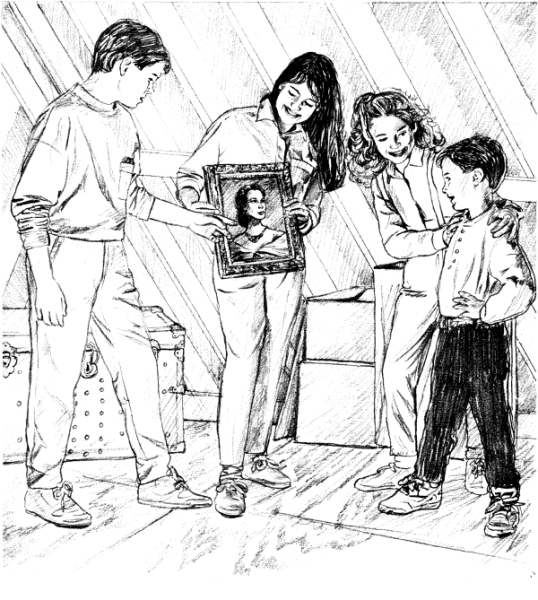 “But those pictures were of an older lady,” Jessie said.

“Well,” Violet said thoughtfully, “this could have been painted when Grandmother was much younger.”

“But if this is Grandmother, why is the picture hidden away up here?” Henry wondered.

Jessie laughed. “Benny, you always get right to the point.”

A
fter dinner, when the whole family was settled in the big living room, Jessie ran up to her room and brought down the portrait. She took it over to her grandfather and held it out to him.

“Grandfather,” she said softly. “We found this in the attic today. We're all wondering who this lovely lady is. Henry thinks it's Grandmother, but this lady looks so young.”

Mr. Alden stared at the picture. He seemed to have drifted off into another world. Looking at her grandfather's sad face, Violet said immediately, “It doesn't matter, Grandfather. We'll take the picture right back to the attic.”

She picked up the painting, but Mr. Alden held out a hand to her. “It's all right, Violet. You can leave it here.”

“Is this our grandmother?” she asked.

Grandfather smiled. “Yes, it is. It was painted when she was a very young woman, and very beautiful. But then, she was beautiful until the day she died.”

“Why was it up in the attic?” Benny asked. “Why isn't it hanging right here?” Benny pointed to the wall over the fireplace.

Grandfather sighed. “Well, children, it's a long story. All of you sit down and I'll tell you.”

Benny and Violet sat at Mr. Alden's feet. Jessie and Henry sat on the sofa next to Grandfather's easy chair. They all looked at him, waiting for him to go on.

Grandfather cleared his throat. “I gave your grandmotherâher name was Celiaâthe necklace she is wearing in the portrait as a wedding present. I had had it designed by a very talented jeweler. It was one of a kind. There was no other just like it anywhere. Your grandmother loved it so much she had this portrait painted of her wearing her precious wedding present. A year after our wedding, we had a big party to celebrate our first anniversary and, of course, she wore the necklace.

“Oh, it was a wonderful party, with food made by the best caterer in town and an orchestra and beautiful flowers. When the party was over, Celia put the necklace in its velvet box and placed the box in her dressing table drawer. She intended to put it in the safe the next day.”

“What happened then?” Benny asked breathlessly.

“Well,” Mr. Alden continued, “she was so busy the next day helping the caterers gather together all the dishes and glasses and pots they had brought to the house that she forgot about the necklace. Until that night. She opened her drawer and took out the velvet jewelry box â¦ but it was empty. The necklace was gone.”

“Where was it?” Benny asked, his eyes wide with surprise.

Grandfather shrugged. “We never found it. We looked all over. The police came the next day and questioned everyone who had been in the house the day before. Everyoneâall the people who worked for the caterer, every delivery person, everyone. They even questioned me! But no one knew anything or had seen anything. The necklace was gone forever.”

“But the picture,” Violet asked softly, “why is it in the attic?”

Grandfather sighed again. “I had hung the painting right over the mantelpiece after it was painted. I loved looking at it. But once the necklace disappeared, your grandmother couldn't bear to look at the painting. It always reminded her of the wedding present she had so loved that was gone. So we took the painting down and put it up in the attic. After all these years, I had forgotten it was still there.”