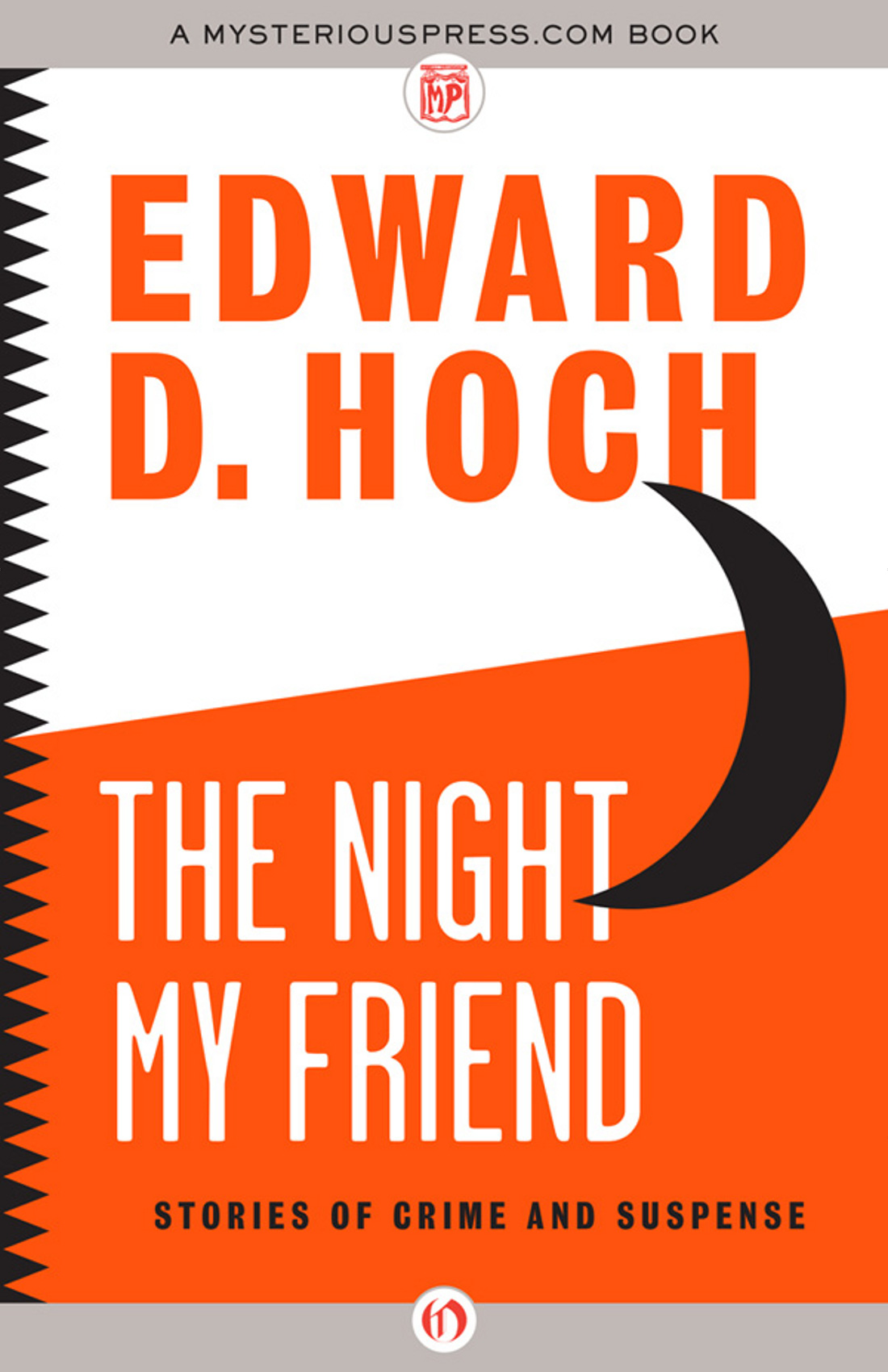 The Night My Friend
Stories of Crime and Suspense
Edward D. Hoch

The Night My Friend

Day for a Picnic

Too Long at the Fair

The Long Way Down

Dreaming Is a Lonely Thing

In Some Secret Place

To Slay an Eagle

They Never Come Back

The Only Girl in His Life

What’s It All About?

Hawk in the Valley

The Ring with the Velvet Ropes

I
F EVER THERE WAS
a member of an endangered species it’s Edward D. Hoch, the only person alive who makes his living writing mystery short stories. To date he has sold almost seven hundred tales, and at his current rate of productivity he should hit the thousand mark in the early 2000s. As if turning out two to three dozen stories a year were not enough, he fills his odd moments with writing a regular column for
The Armchair Detective,
editing the annual
Year’s Best Mystery and Suspense Stories
anthologies, and serving tirelessly on various committees of the Mystery Writers of America organization. He’s written five novels, plotted a series of mystery-puzzle paperbacks, and is presently working on a book-length whodunit in collaboration with other members of MWA. Not exactly the lightest of work-loads; and yet he never seems harried or overcommitted and comes across in person and correspondence as an amazingly placid and easy-going fellow. His secret? If you are doing precisely what you want to do with your life, and making it pay besides, the distinction between work and play becomes meaningless and every hour is a pleasure.

Edward Dentinger Hoch was a Washington’s Birthday boy, born in Rochester, New York on February 22, 1930. His father, Earl G. Hoch, was a banker, but despite the precarious nature of that line of work during the Depression, the family weathered the thirties without serious problems.

From a very early age Ed was fascinated by mystery fiction. “When I was a young child,” he said, “I used to draw cartoon strips and have masked villains running around. They were terrible, just stick figures, because I wasn’t much of an artist, but I’d try to draw in cloaks and masks to identify the villains so I could have a final unmasking to surprise the reader. Of course, I was the only reader. No one else saw those strips.”

In June of 1939, when the sixty-minute
Adventures of Ellery Queen
series debuted on the CBS radio network, nine-year-old Ed Hoch was one of its staunchest fans. Later that year, when Pocket Books, Inc. launched its first 25¢ paperback reprint books, the boy discovered that his hero Ellery Queen had been the protagonist of many novels as well as a radio sleuth. The first adult book he ever read was the Pocket Books edition of Queen’s 1934 classic
The Chinese Orange Mystery.
“It was among the first group of paperbacks published, and I recall going down to the corner drugstore and seeing them all lined up with their laminated covers. I debated for some time between James Hilton’s
Lost Horizon
and an Agatha Christie title [probably
The Murder of Roger Ackroyd
], and finally settled on Ellery Queen because I had heard the Ellery Queen radio program which was so popular in those days. I bought
The Chinese Orange Mystery
and was completely fascinated by it, sought out all the other Ellery Queen novels I could find in paperback, as Pocket Books published them over the next few years, and from there went on to read other things. I read Sherlock Holmes at about that time too.”

It was during the forties that, one by one, Ed Hoch discovered the masters of fair-play detection: Conan Doyle, Chesterton, Christie, John Dickson Carr, Clayton Rawson, and of course the cousins Frederic Dannay and Manfred B. Lee who wrote as Ellery Queen. In 1947, after completing high school, he entered the University of Rochester, but left two years later to take a researcher’s job at the local public library. He enlisted in 1950, during the Korean conflict, and once out of basic training he was assigned to Fort Jay, on Governor’s Island just off Manhattan, as a military policeman. He took advantage of being stationed near the headquarters of Mystery Writers of America, which was then only five or six years old, to attend the organization’s monthly meetings (in uniform) and to mingle with the giants of deductive puzzlement whose books he’d been hooked on since age nine. Discharged from the service in 1952, he went to work in the adjustments department of Pocket Books, the house that had started him reading detective fiction, and continued to write short mysteries as he had since high school. In 1954, back in Rochester, he took a copywriter’s job with the Hutchins advertising agency, and late the following year he knew the special pleasure of seeing his first published story on the newsstands. That was the start of Ed Hoch’s real career, one that is still going strong thirty-six years and almost seven hundred stories later.

For more than a dozen years after that first sale, he kept his job at the ad agency and saved his fiction writing for evenings, weekends, and vacations. But he was so fertile with story ideas and such a swift writer that editors and readers could easily have mistaken him for a full-timer even in those early years. In 1957 he married Patricia McMahon, with whom he still shares a small neat house in suburban Rochester. (Two of its three bedrooms were long ago converted into his office space, and the basement into a library filled with thousands of mystery novels, short story collections and magazine issues, few of them without at least one Hoch story.) The field’s top publications,
Ellery Queen’s
and
Alfred Hitchcock’s
mystery magazines, began printing his tales in 1962. Six years later, having won the coveted Mystery Writers of America Edgar award for the best short story of 1967, he decided that he could support the family on his writing income and left the advertising agency. He continues to write full-time (many would say more than full-time) today. During 1982–83 he served as president of the organization to whose annual dinners he had first come in military khaki more than thirty years earlier. At age sixty-one he shows no signs of slowing down, and readers around the world hope he’ll stay active well beyond his thousandth story.

Why so few novels and so many short stories? It boils down to Hoch’s special affinity for the short form. “Writing a novel has always been, to me, a task to be finished as quickly as possible. Writing a short story is a pleasure one can linger over, with delight in the concept and surprise at the finished product.” Or, as he put it elsewhere, “I guess ideas just come easily to me. That’s why I’ve always been more attracted to the short story form than the novel. I am more interested in the basic plotting than in the development of various sub-plots. And I think the basic plot, or gimmick—the type of twist you have in detective stories—is the thing I can do best, which explains why so many of my stories tend to be formal detective stories rather than the crime-suspense tales that so many writers are switching to today.”

Those words are misleading in one sense: more than two hundred of his published stories are non-series tales of crime and suspense, and some of the best of them are collected here. But most of his energies have gone into the creation of short-story series characters and the chronicling of their exploits. To date he has launched twenty-four separate series, dealing with all sorts of protagonists from an occult detective who claims to be more than two thousand years old to a Western drifter who may be a reincarnation of Billy the Kid to a science-fictional Computer Investigation Bureau. Whatever the concept of a series, whatever its roots, Hoch’s tendency is to turn it into a series of miniature detective novels, complete with bizarre crimes, subtle clues, brilliant deductions and of course the ethos of playing fair with the reader that distinguishes the work of Carr, Christie, and Queen. The best introduction to the world of Ed Hoch is a quick tour through each of his series in the order in which they were created.

SIMON ARK, the two-millennia-old Satan-hunter, was the central character in Hoch’s first published story, “Village of the Dead” (
Famous Detective Stories,
December 1955), and appeared in many tales that editor Robert A. W. Lowndes bought for the Columbia chain of pulp magazines during the late fifties. The ideas in these apprentice stories are occasionally quite original (e.g. the murder of one of a sect of Penitentes while the cult members are hanging on crucifixes in a dark cellar), but the execution tends at times to be crude and naive and the Roman Catholic viewpoint somewhat obtrusive. Eight of the early Arks were collected in two rare paperback volumes,
The Judges of Hades
and
City of Brass,
both published by Leisure Books in 1971, but the most readily accessible book about this character is
The Quests of Simon Ark
(Mysterious Press, 1984). In the late 1970s Simon was resurrected for new cases in the
Alfred Hitchcock
and
Ellery Queen
magazines, but these tales pare down the occult aspects to a bare minimum and present Ark simply as an eccentric old mastersleuth specializing in impossible crimes.

PROFESSOR DARK, apparently an alter ego of Simon Ark, popped up in two obscure pulp magazine stories of the mid-fifties under Hoch’s pseudonym of Stephen Dentinger, but they have never been reprinted and are of interest only to completists.

AL DIAMOND, a private eye character, began life in “Jealous Lover” (
Crime and Justice,
March 1957), which featured a walk-on part by a Captain Leopold, later to become Hoch’s most frequently recurring series detective. After two appearances, Diamond’s name was changed to AL DARLAN so as to avoid confusion with Blake Edwards’ radio and TV private eye Richard Diamond. Although little known and rarely reprinted, Hoch’s best Darlan tales, such as “Where There’s Smoke” (
Manhunt,
March 1964), are beautiful examples of fair-play detection within the PI framework.

CAPTAIN LEOPOLD, the Maigret of a northeastern city not too different from Hoch’s native Rochester, has been the protagonist of close to ninety stories beginning with “Circus” (
The Saint Mystery Magazine,
January 1962). In the best of them, collected in
Leopold’s Way
(Southern Illinois University Press, 1985), Hoch fuses the detective gamesmanship stuff of the Ellery Queen tradition with elements derived from Graham Greene and Georges Simenon, burying unexpected nuances of character and emotion beneath the surface of his deceptively simple style.