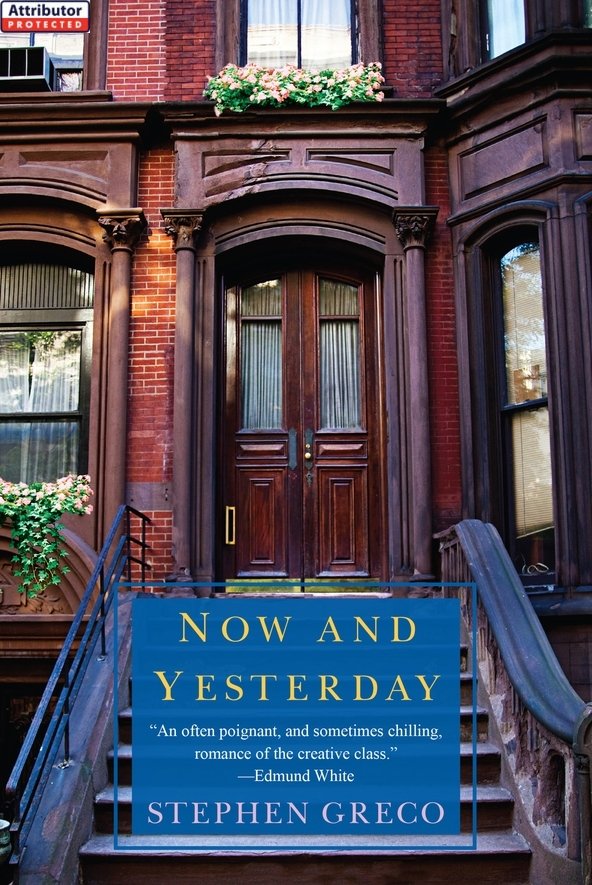 Advance praise for
Now and Yesterday

“
Now and Yesterday
is both an up-to-the-minute dissection of contemporary Manhattan and an old-fashioned nineteenth-century novel with all its pleasuresâbig set pieces and a rich cast of characters. With great skill, intelligence, and emotional wisdom, Greco paints an indelible portrait of The Way We Live Now.”

So here I am, in the middle way, having had twenty yearsâ
Twenty years largely wasted, the years of l'entre deux guerres
Trying to learn to use words, and every attempt
Is a wholly new start, and a different kind of failure
Because one has only learnt to get the better of words
For the thing one no longer has to say, or the way in which
One is no longer disposed to say it . . . .

W
hen Harold first saw the apartment, the week before, it was painted in hideous colors that someone had obviously thought groovy. The living room and little alcove looking onto the back garden were electric yellow, while the bedroom, on the street, was neon orange and dominated by a five-foot-high, freestanding structure of two-by-fours and plywood, like a play fort, in royal blue. The previous tenants had kept their desk inside the thing, the realtor said, and their mattress on top. By the time Harold returned with Peter, two days later, the fort was gone and the whole apartment had been painted white. The place looked bigger and, while possibly less groovy, more like the charming abode that the boyfriends instantly agreed it could beâthe parlor floor of a handsome old Brooklyn row house that was meant to be their home.

They were at one of the large windows facing the street, rigging up an improvised window treatment of old bedsheets and flimsy tension bars they'd brought with them from Ithaca.

“Steady, please,” said Peter, standing on a stepladder, adjusting the tension bar to fit snugly inside the window frame.

“I'm
trying,
” sang Harold, crouching below and holding the bottom bar in place.

It was early on a summer evening, their first in the new place. There were screens in the windows, and as they worked the sounds of neighbors walking by filtered in genially from the street. They'd spent the day moving and settling in with the few possessions they hadâboxes of books and records, several lawn-and-leaf bags stuffed with clothing, a pair of mismatched director's chairs, a thirdhand steamer trunk they planned to use as a table (“We can sit on the floor, Japanese-style. . . .”), some kitchen items they'd picked up at a neighborhood stoop sale, and an old mattress that had been sitting unused at the apartment nearby where they'd been crashing with Cornell classmates who'd moved to Brooklyn before them, that spring.

Peter stepped down from the ladder and gave the improvised shades a final smoothing.

“So how long do you think we'll have to suffer this mess?” he said, regarding his handiwork. The beige-and-white-striped sheets, which had looked so sophisticated when new, a few years before, were now threadbare.

“Think we'll ever have real drapes?”

“Of course we will, eventually. Maybe even soon. I mean, if that's what you want. But what about blinds, babyâwouldn't wooden blinds be nice?”

“Can you imagine how much wooden blinds would cost for windows this big?” he said, slipping his arm around Harold's waist. “Probably a month's salaryâand remember it's
your
salary we're talking about, sweetheart, 'cause I don't have one.”

“One of those interviews will pan out, don't worry,” said Harold. “Meanwhile I think it's extremely cool to use a trash bag as both a dresser and a chair.” From the floor Harold grabbed the mug of wine he'd been sipping and flopped down on one of the bags full of clothing. To celebrate the housewarming they'd opened a bottle of Boone's Farm apple wine and were drinking from drab-ware mugs that Harold's sister had given them as a gift.

“Honey,
no,
” said Peter, pushing Harold off the bag and fluffing it back into shape. “That'll wrinkle everything. I hope those were
your
clothes. . . .”

They laughed and Peter looked around for his wine.

“It's a very pop, very
now
way to live, don't you think?” said Harold, moving over to the mattress on the floor in the middle of the room and making himself comfortable on it.

“Yeah?” said Peter. “Andy Warhol? You wanna live like that?”

“Could be cool,” said Harold.

“Might get cold in here this winter, without drapes.”

The stereo had gone silent, and Peter was about to flip over the record they'd been listening to, Judy Collins's
Wildflowers,
when Harold stopped him.

“Oh, play that last song again, please. It's so beautiful.”

Peter set the needle down on “Lasso! di donna,” Collins's take on a fourteenth-century Italian
ballata,
then he got down on the mattress beside Harold.

The track had a bad skip in itâthe result, Peter thought, of his having lent the album once to a friend who, like everyone else, handled records far less reverently than he did. The skip always made Peter wince, though the expectation of it had become oddly satisfying by now, and he could almost savor the fact that perfection had given way to an experience of the song that was his in a special way. The embrace of flaws and particularities could apparently bring unexpected consequences that were welcome and sometimes even glorious. At least, that was the way he explained his relationship with Haroldâhow they had gone, during the previous year, from being acquaintances to friends to boyfriends, to this larger thing they were now exploring. They were committed to each other now, they said, and wanted it to last indefinitelyâand they said this because they didn't know what else to do
but
say it, while moving in together and vowing to accept each other's particularities and make up life as they went along.

“The street is quieter than I thought it would be,” said Peter lazily, in the silence after the song ended.

The day's work was done, and it felt good to be temporarily beyond the reach of family and friends. The phone wouldn't be installed for another couple of days. They'd already decided against rushing out to a dance performance that Harold thought might be interesting, in favor of a quiet night. “Important things are happening,” Harold always said, and that was exciting, even if some of those things, like the Lou Reed songs they'd heard a few nights before, at the latest incarnation of Andy Warhol's Factory, were a little scary for a couple of nice gay boys with middle-class dreams. Now that they lived in the big city and were gobbling up culture, they were encountering plenty of stuff that they admitted to each other was mystifying, even intimidatingâavant-garde theater, experimental music, performance art and the like. Yet Harold, ever the advanced thinker and now a promising journalist, maintained that mystifying was good and exposure to it healthy. So they'd face it as a team. And it thrilled them that Harold was beginning to get comp tickets to these events, as a newly hired stringer for the
Times
âthough it wasn't clear exactly what a guy who'd written his master's thesis on the “hagiographic, eremitic, and Biblical traditions” in an Old English poem about Saint Guthlac would bring to the coverage of contemporary culture, nor indeed how Peter, who'd never had a clue what to do with his life, could survive by writing poetry. They'd figure out something.

“What are we gonna do about dinner?” said Peter, propping himself up and setting aside his mug conspicuously at arm's length from the mattress.

“Well, let's think about that, shall we?” said Harold, setting aside his mug, too. “We could go to the falafel place.”

But before they could decide they were kissing and pawing each other, and the sound of them laughing and rolling around on the mattress was echoing from the freshly painted walls of their empty new house. And as the day faded they realized they could still see each other's faces in the darkening room, since the old sheets did such a feeble job of shutting out light from the streetlamp that came on right outside their window.

“First fuck in our new home,” said Harold, as he rolled on top of Peter and kept covering his boyfriend's face, neck, and ears with hungry kisses.

“I know,” burbled Peter. “Consecration of the house.”

Peter was giggling, pretending to shield himself from the barrage.

“I know what you're doing. I love you anyway.”

The Pursuit of Tamsen Littlejohn by Lori Benton
Little Nelson by Norman Collins
Strings of Fate (Mistresses of Fate) by Dore, Deirdre
At Death's Window by Jim Kelly
Code of Conduct by Kristine Smith
The Colour of Magic by Terry Pratchett
Pack by Lilith Saintcrow
Ashley's Bend by Roop, Cassy
Gathering of the Chosen by Timothy L. Cerepaka
Chase Baker and the Golden Condor: (A Chase Baker Thriller Series No. 2) by Vincent Zandri