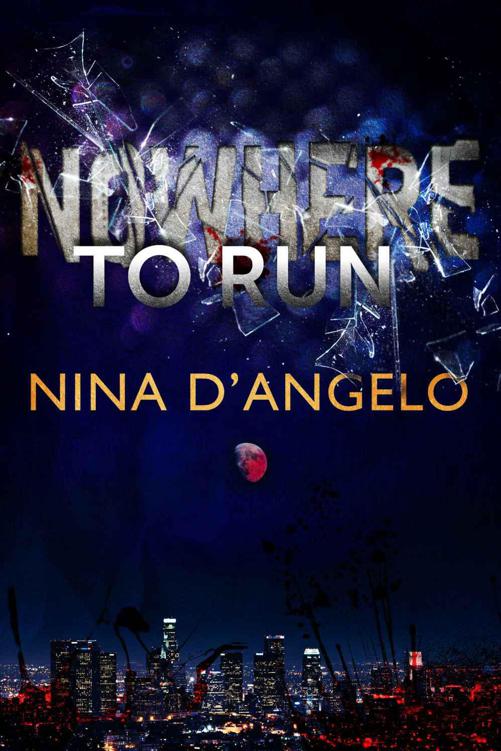 This book contains material protected under International and Federal Copyright Laws and Treaties. Any unauthorized reprint or use of this material is prohibited. No part of this book may be reproduced or transmitted in any form or by any means, electronic or mechanical, including photocopying, recording, or by any information storage and retrieval system without express written permission from the author.

Quotations may be used for the purpose of book reviews; and marketing if permission is granted by the author prior to use.

Please respect the hard work of this author. If you have obtained a copy of this book without purchasing it, or it was not purchased for your use only then please delete the file and purchase a copy legally. This novel is your enjoyment only and may not be resold or given to other persons. If you would like to share
Nowhere to Run
with others then please purchase additional copies for each individual.

Nowhere to Run
is a book of fiction. The characters and events in this book are fictitious. Any similarity to real persons, living or dead, is coincidental and not intended by the author.

This novel is dedicated to the memory of Sarah Metcalfe. Sarah, you were my best friend from the time we were 11. You lost your battle with cancer late last year. I lost an amazing friend and heaven gained a beautiful angel. Not a day goes by I don’t think of you. I miss you.

To my Grandfather Henry Salmon, who has always encouraged me to just be me. You taught me to appreciate fine art, to be proud of my heritage and to appreciate the beauty of Andrew Lloyd Webber’s
The Phantom of the Opera
. I love you Grandad.

Angeline closed her eyes, her breathing shaky. With tears sliding down her cheeks, she slowly counted to ten. She clutched the kitchen knife in her hands, the handle slippery with her own blood.

This time he’d kill her. Of this, she didn’t doubt, but she also knew she wasn’t going to go down without a fight. She’d fight him to the very end.

She swallowed convulsively. How could he have found her? After all this time, how could he have possibly known where she was? She’d been so careful in covering her tracks - in erasing any trace of her past.

Her eyes flew open, hearing his heavy footsteps. Slow and steady, they moved along the polished, wooden floorboards. She crouched further down in her wardrobe, a silent prayer tumbling from her lips. She prayed for all her past sins, praying for anything to get her out of this nightmare.

Squeezing her eyes shut, she shakily wiped away the tears wetting her cheeks. Never again would she see her friends. Never again would she hold them close and let them know how much they meant to her. How much she loved them. They were the closest she had to a real family, but now she would never get the chance to say her goodbyes.

She gasped, panic rippling through her. Stuffing a fist into her mouth, she bit down hard, a sob escaping from her. Stephanie! She had to warn Stephanie. She had to warn her to stay away; to stay where she was safe. If he had found her then it would only be a matter of time before he found Stephanie too.

Hearing his footsteps moving towards her, she froze, her heart pounding rapidly. She could almost taste her own fear. This was the end for her. She was going to die. She knew she wasn’t going to be able to fight him off. He was strong – so much stronger than her.

Straightening her back, she took a deep breath. No more was she going to let fear rule her. Even while there was a part of her terrified of dying, another part of her was completely at peace with it.

“Sweet Angeline, you’re being very naughty. Come out wherever you are. You can’t hide from me forever, my darling Angel,” he sang, spinning around the room.

Her grip on the knife tightened. She waited, her heart racing, watching the closet door handle slowly turn.

As soon as the door opened she pounced, a raw scream ripping from deep within her throat. Adrenaline surged through her as she tackled him to the ground.

She clawed at him, fury driving her. She raised the knife above her head, bringing it down in a vicious thrust.

He parried the thrust, catching her arm before she could make contact with his body. His other hand shaped into a fist, slamming into her jaw. He smiled coldly, watching her slump unconscious to the ground.

“I’m sorry my sweet Angeline. I didn’t really want to do that, but you left me with no choice.” he whispered, tenderly stroking her blonde hair.

“You wondered why I wanted you, my Angel. You’ve got spirit. You’re a fighter. I like that in my woman.”

He lovingly ran his hands over her body. “You’re the key. You’re what will bring her back to me. It’s why I chose you,” he whispered, gently caressing his lips against her cheek.

Straightening up, his expression turned cold. He slid the knife blade across her cheek, drawing blood.

He spoke to the silent room. “Now, it’s time to get this party started.”

Stephanie Carovella opened her eyes slowly, briefly disorientated. Taking a deep breath, she collected her thoughts. She was on a plane, miles above the ground and far from anywhere.

Glancing down at the Rolex on her wrist, she shifted restlessly. It was almost two in the morning in London. It felt like a lifetime since she’d caught the red-eye from Heathrow airport, but in reality it was only six hours ago. In less than two hours she would touch down at L.A.X.

She glanced around at her surroundings. Passengers around her were asleep, lost within their own dreams. She wished she could do the same, but hers were only troubled. Dreams of her past and her unforeseen future haunted her. Tugging open the window blind, she stared out into the nothing. Soon she would be back in Los Angeles.

Los Angeles, The city of Angels; where dreams were supposed to come true, but more often than not, where they were shattered. The last time she’d been in L.A was six months ago. She’d buried Dominic Delaney, her husband.

Dominic had been her best friend. She’d loved him with a fiery passion and at times hated him with the same soul-consuming passion. They’d had a tumultuous marriage, both of them equally stubborn and hot headed. He was from a past she wanted to leave behind, but one she could never forget.

His dying was the catalyst; the driving force behind her decision to completely cut her ties with L.A.

When Dominic died, she vowed nothing or no one could make her step foot in that God forsaken city again. Leaving wasn’t as hard as starting all over again. L.A held nothing but broken dreams, lost memories and a scatter of friends who’d become strangers to her.

Yet, despite her vow, here she was; sitting on a plane, a million miles from anywhere, heading back to a city and a past she had thought she’d put behind her. Returning to attend the funeral of another she’d loved dearly.

Closing her eyes, a sense of loss and dread washed over her. Angeline, or Angel to those who knew her, had been raped and murdered from within the safety of her own home.

She’d built herself a fortress, one which had become her prison in the end. Tears sliding down her cheeks, she thought back to the last time she’d spoken to her best friend. Angel seemed so happy and finally appeared to have her world back on track. She’d mustered up the courage to go back to university, and had a new man in her life.

A man she genuinely loved and who loved her back. She’d started to turn her whole life around and was finally putting the ghosts of her past behind her.

She opened her eyes, blinking back tears; she wiped the remnants away from her face. Angel had been 28. She was too damn young to die. Their friendship was at its strongest, despite their ups and downs. Dominic’s death had placed a deep strain on it and the last few months had been rocky ones. There were times when Stephanie hadn’t been sure their friendship would survive. When Dominic died, instead of supporting each other and mourning his loss, they’d turned on one another.

She’d blamed Angel for Dominic’s senseless death, and Angel had blamed her for walking away from Dominic, just when he needed her the most. They’d both blamed each other but, finally, they’d put aside their differences to mourn him.