Read Of Being Yours[another way 2] Online 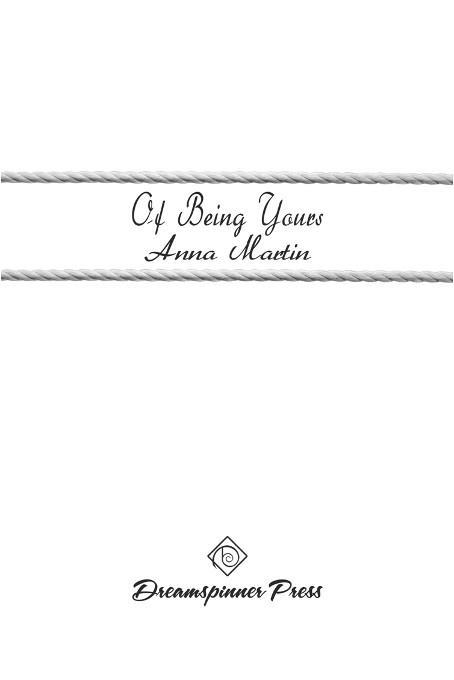 Of Being Yours
Copyright © 2012 by Anna Martin

All rights reserved. No part of this book may be reproduced or transmitted in any form or by any means, electronic or mechanical, including photocopying, recording, or by any information storage and retrieval system without the written permission of the Publisher, except where permitted by law. To request permission and all other inquiries, contact Dreamspinner Press, 5032 Capital Circle SW, Ste 2, PMB# 279, Tallahassee, FL 32305-7886, USA.
http://www.dreamspinnerpress.com/

Firstly, and mostly, this novel is dedicated to those who supported me through every exhilarating moment of writing and releasing
Another Way
and encouraged me to tell a little bit more of Will and Jesse’s story.

Thank you to Kira, who talked me down from the ledge when it genuinely seemed like I would never finish writing.

And as always, Jennifer, I couldn’t do it without you.

I am done with my graceless heart

So tonight I’m gonna cut it out and then restart.

It’s always darkest before the dawn.

Florence and the Machine

T
HREE
years down the line, and he was still my everything.

And I was still his.

Things had changed, of course; he’d quit his job at his father’s firm in order to pursue his own career, on his own terms, where the name Anderson would only mean Will and his own achievements, not those of his father before him. His new role was developing software for emerging communication devices, mostly for the military. It often meant signing nondisclosure agreements—he couldn’t tell me about his contracts, and I just had to accept that sometimes he was stressed and couldn’t tell me why.

I had completed my MA in history in just over two years, during which I’d lived off my sponsorship and a scholarship and worked like a madman to finish in as short a time as possible. I was motivated by the knowledge that my funding wouldn’t last forever. In my graduating class, I was one of the lucky ones: I took my interest in modern history and used it to secure a job at Seattle’s EMP Museum. Although I started off right at the bottom of the career ladder, I had a fantastic boss who encouraged me to take on my own responsibilities, and slowly but surely, I managed to creep my way up in the museum’s hierarchy.

It was sometimes a point of contention between us—how much time we both spent at work. I was used to fairly regular shifts at the museum except when a project took over my life, and Will had to work weekends when the company demanded it of him. Things started to settle down after the screaming, plate-smashing argument we had a year ago. Sometimes little things like lunch together on Fridays, or neither of us working on Sundays unless it was really, really important, helped maintain a happy equilibrium. We also stuck a calendar to the fridge where we could mark important dates; that way there was no comeback to the argument “I told you about it!” “No you didn’t!”

We talked and talked and talked about moving away from Seattle to a bigger city, one where we could pursue something different…. To New York, where I could take the next steps in my career, or to Washington, DC, where Will could further his. But Seattle was our home, where we’d fallen in love and where his family was. So we stayed.

We held hands in public from time to time and dealt with the inevitable consequences of that choice. People invited us to family gatherings—weddings, barbeques, parties—as a couple. I called his mother Mom. She called me “that pain in the ass who eats all the food in my house.” I loved her to bits.

Will’s father had a harder time coming to terms with our relationship than Cara. Although he still loved his son, it took some adjusting for him to rearrange his expectations of Will’s future. I respected that, just as I did him as a man. I wouldn’t have blamed him for resenting me, but he never did. He was stern but fair and, with time, came to accept me as Cara had.

We took rather infrequent trips down to Georgia to see my big annoying fucked-up family, the infrequency mostly due to the fact that they were fucking crazy and drove
me
crazy every time I saw them. As expected, Will was never “Jesse’s partner” or “Jesse’s boyfriend” in polite company. He was my companion, or my housemate, or (the best one yet), when we introduced him to my eighty-five-year-old grandmother, my “man friend.” Will had to excuse himself after that one to go outside and
die
laughing.

It always amused me how unequipped Will was to deal with the heat in my home state. I purposely timed our previous visits around the cooler holidays: Christmas, Easter, Thanksgiving. Fourth of July weekend was going to be a challenge for him, but he had agreed that this year, we’d spend that particular holiday down south. I, for one, was looking forward to it. He looked incredible in a tight T-shirt and shorts.

I always knew when he wanted me to make love to him. He’d grow quieter, almost as if he was scared of asking me for what he wanted. Not that I ever said no.

Some of the best moments in our relationship were when I’d gently lay him down on the bed, our lips fused together and moving slowly, my hands roaming over his skin as he unbuttoned my shirt, kissing my neck and throat as we rocked together.

I would light candles sometimes, and the flickering light made strange shadows dance over our skin and the walls. Or sometimes it would be late in the afternoon when the sun had turned the sky pink and orange—just enough light to see by.

His fingertips—oh fuck, his fingertips. I could, and would, watch his hands for hours, but when I made love to him, he would trail just the very tips of his fingers all over my skin, but particularly up and down my sides, and look up into my eyes with a vulnerability that was real only in that moment. Will was still the least vulnerable man I had ever known. But when he was underneath me, with his wide brown eyes so open and honest and loving, I had the power to break him.

Instead, I loved him.

When we made love with my chest to his back, my cock buried deeply inside him and his face in a pillow to muffle his cries, I’d take both his hands in mine and hold them tightly. I would kiss the back of his neck, his shoulders, lick from the first bump of his spine as far down as I could, arching my own back upward until the pain of not being pressed up against every inch of his skin was too much.

What I liked best was having his ankles over my shoulders when he was on his back, or his feet braced against my chest as I bent him in half, the position spreading his cheeks wide for me. When we made love like that, I could see him. See all of him. He was the most beautiful thing in my world when he lifted his hips to my thrusts, never able to be the passive lover. Never submissive.

Like that, I could watch my name fall from his lips when he came, his throat bared to my teeth, his eyes screwed tightly shut from the deep, intense emotion that threatened to overwhelm us both.
He would grip my biceps
as he came, gasping and sobbing. I had moments where I almost lost my own orgasm while I was so absorbed in him; it would throb through me in gentle pulses that went on and on and on instead of one hot burst of pleasure.

“Will,” I would whisper over and over again, as if it were the answer to everything. “Will.”

W
E
’
D
made some changes to the playroom over the past two years, getting rid of certain pieces of apparatus that we rarely used anymore, like the spanking bench and the padded table, and replacing them with new equipment. While being snowed in the previous winter, I’d stripped the black paint from the walls, sanded them back, and replaced them with dark wood paneling.

The hardwood floors had always been one of my favorite things about the attic space, and in the same long weekend, they’d been restained. The glass boxes holding our equipment had gone, too, and now where there once were mirrors, a long, shallow cupboard held whips, riding crops, paddles, and thin, whippy canes.

The overall effect was that of warmth. Our old playroom had been harsh: black walls, silver mirrors, glass and metal and chrome. And that worked for us in the first few years of our relationship, when our roles were much more defined as those of Master and submissive. The new room reflected our changing positions. I still served him, but there was an undertone of love and respect and commitment between us that had undoubtedly shaped who we were.

Now when I knelt for him, the smell of wood was reassuring, along with the warmth and the music that was still pulsing rock. Some things didn’t change.

He walked past me, gently brushing his hand over my head as he did so, crossing from the door to the wall where my collar and cuffs were hung. I lifted my chin so he could secure the beautiful tan leather sheepskin-lined collar around my throat, then held my wrists out so he could buckle them to the cuffs. When he was done, I moved my arms back behind me and held each elbow with the opposite hand.

“How energetic are you feeling tonight?” he asked. “What I’ve got planned for you will require plenty of stamina.”

“I’m ready to serve you,” I said, keeping my eyes low.

He hummed low in his throat, disbelievingly. “Follow me.”

Master hadn’t indicated that I should stand, so I crawled after him to the other side of the room, where our rigging equipment was set up. I hated crawling, but it was one of the few things that sent me straight into a submissive mind-set. It was precisely because I hated it but did it anyway that it reminded me I was beneath him. He owned me. I did what he told me to do. And with realizing that, I was ready for whatever he had planned for me.

Destination D by Lori Beard-Daily
The CEO and the Girl From the Coffee Shop by Terry Towers
Mercury Revolts by Robert Kroese
Smooth Operator by Risqué
Lesbian Cowboys by Sacchi Green
The Weight of Rain by Mariah Dietz
Summer's End by Danielle Steel
The Defector by Daniel Silva
Gnosis by Wallace, Tom
An Annie Dillard Reader by Annie Dillard