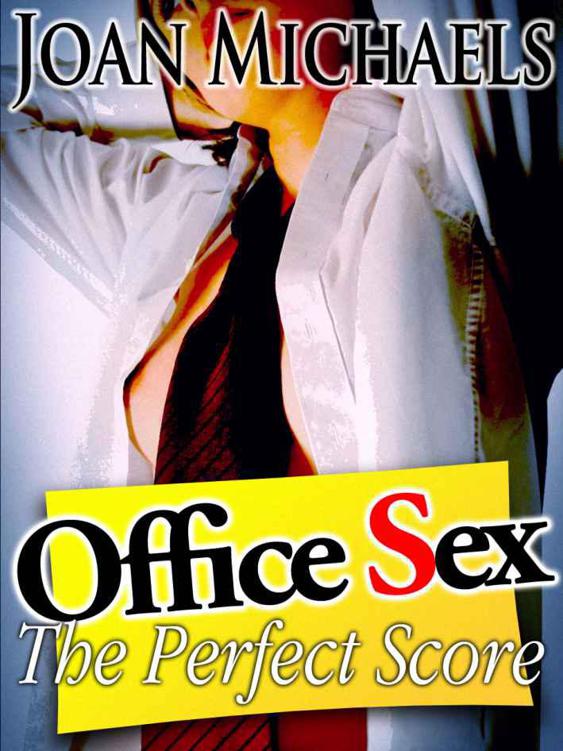 All Rights Reserved. No part of this publication may be reproduced in any form or by any means, including scanning, photocopying, or otherwise without prior written permission of the copyright holder.

Disclaimer and Terms of Use:
This is a work of fiction. Names, characters, places and incidents either are products of the author’s imagination or are used fictitiously. Any resemblance to actual events or locales or persons, living or dead, is entirely coincidental. The contents of this work should not be emulated or taken as sexual advice. Reading this work has been known to cause indecent arousal, sensation in the loins, uncontrollable urges, unintended moaning, increased heart rate, heavy breathing, flustering, sweating, hot flashes, wobbly knees, mischief, naughtiness, randiness, a warm body nearby to get lucky, and general misbehavior. You have been warned.

More Books by the Author

Pumps in the Air (Diamond Thief)

The long and heated conference finally call comes to an abrupt end.

Taking a deep breath, as he irritably rakes his fingers through his hair, Mark Peters sits back in his tufted leather office chair.

His lover’s jinx had struck yet again, and for the second time in less than six months, he’d been betrayed by another woman looking for her five minutes of stardom, via the press.

He’d been seen entering a hotel with her.  Cameras had flashed as he left alone, but apparently she later strutted out to meet the hungry reporters who were dying for any information she was willing to offer about their tryst—and
boy
had she offered them a feast…

The opened daily newspaper link emailed to him by his colleagues showed her Cheshire Cat grin as she practically gave them a pay-by-play of what they’d just finished doing, and even let on that they had met at a strip club where she had been working the pole extra hard the night she caught his eye.

Ordinarily, blunders like this would cause one due embarrassment, but swiftly be swept under a rug in order to make room for better decisions (or more private locations) in the future, but that was not the case for Mark Peters.

This slip-up wasn’t just
his
blunder.

No error was his sole responsibility when he was the “Peters” in
Jefferson, Peters, and Lloyd Productions.

His two college-buddies-turned-partners, Eric Jefferson, and Michael Lloyd, were everything Mark was not, and he had no problem admitting to it.  They were responsible, hard working, respectable, mature…

Mark was still a frat boy in every sense of the term, preferring to work little and play hard.

Truth was, as much as he hated shouldering the responsibility of upholding the company name, he knew how much he needed his partners.  He also knew his life would be over if they delivered on their threat, only moments ago during the conference call, to cut him off and kick him out.

He’d be the joke of his industry.  Who would want to hire a failed producer, shunned by his founding partners for being a flagrant gigolo?

Sighing again, he cursed the senseless stripper underneath his breath.

Was it really a crime for him to want to try to erase the years spent shackled to a woman he’d only married because she’d gotten pregnant after their first few (careful) months together?  Should he go rushing back into another marriage (which was akin to imprisonment to him), in order to uphold the company name, and act as the other partners expected?

Turning to face his reflection in the tinted office windows, he studies himself.

At the age of fifty-three, he was still a “stud”, as the ladies called him.  He took good care of himself (went to the gym several times a week, and even went running some mornings).  He wasn’t a smoker, and only drank during social events.

He was a good-looking man, with sandy-brown hair streaked with gray, and hazel eyes.  His muscular body, along with his clean-shaven face, gave him the look of a man not quite yet approaching forty.  All of this (plus the fact that he had a career that got him into any private party or club, not to mention loads of money to spend) made him a hot commodity amongst the ladies, and while he knew he hadn’t made the wisest choices when it came to them, he also knew he could not quit sampling them so readily.

That had been the deal:  if another troublemaker threatened to tarnish the company’s reputation with
his
name on the tip of their tongues, he was through at JP&L, and instead of dumping his initial, they’d just replace him with his ex-wife, Caroline—who had refused to drop his surname after the divorce.

A knock at his double doors startles him only for a second as he absentmindedly allows the person entry, and the soft voice that floats over to his turned back causes indifference.

“I’m sorry, Mr. Peters, sir.  I was told to wait for a private fax being sent to your machine…”

“Fine,” he answers back, knowing she was probably ordered to do so by Michael or Eric.

Why the lawyers, and other people of importance insisted on having paperwork sent his way he never knew—but he welcomed the other partners taking it off his hands.

He had long since acknowledged that he may not be the one amongst them that had the responsible mindset, but he had schmoozed his way with this big name or that, and helped to promote them (alongside Caroline) in order to make them a well-known name.

He really wished they understood that with his type of power came great conflict, but alas they were old-fashioned, and couldn’t fathom the idea of needing to lie back at the end of the day to watch a pretty young thing skillfully gobbling one’s knob whole.

That stripper may have been a sell out, but the few hours they spent together had almost been worth the risk…

No loose-tongued striptease was worth him losing all he’d worked to build up.  He’d have to leave that life behind, and find a way to satisfy his desires through more sensible means.

His third deep breath is meant to calm…but instead, he finds himself waking up in a way that’s highly inappropriate during his occasional office visits.

The soft, delicious scent of vanilla perfume has invaded his senses.

Hearing the mechanical sounds of the fax machine coming to life behind him, he remembers that he’s no longer alone, and swivels in his leather seat to turn in the direction of his sweet-smelling intruder.

His eyebrows rise a half-inch above their normal resting place.

Standing on the other side of the room is one of the most gorgeous females he’s ever seen in his life.

If her long, strawberry blonde locks aren’t enough to take his breath away, the soft and innocent face surrounding sexy cherry-red pouted lips does the trick.

The white, button-down blouse she wears is sheer enough to show the faint lines of a white bra underneath—and although she couldn’t possibly be more than a b cup, the hourglass figure partially covered by a short honey colored skirt more than makes up for that.

Realizing she’s being watched, her sky blue eyes find Mark’s, and his breath catches in his throat.

“I’m…I’m
so
sorry—I’m sure it’ll only be a few seconds more,” she stammers fearfully, and when Mark responds with cheerful laughter, her red lips form an O of nervous surprise.

“It’s quite alright,” Mark replies.  “I’m always happy to have legal work taken as
far
away from this office as possible, so you’re doing me a
huge
favor…”

The pretty figure smiles, and—once again, he finds himself stirring eagerly down below.

“Jasmine,” she whispers.  “I was told you were out of the office when I started working here last week—they told me to introduce myself to you when you got back…I’m one of the new interns…”

Holding a smile and nodding appreciatively, Mark clings to her gaze.

Lighting up in a way that almost drags him across the room to her, Jasmine presses her palms to her chest and smiles excitedly at him.

“Oh,
yes
—I know!” she answers.  “I’m…I’m
so
honored to have gotten this internship—I can’t even begin to tell you how
thrilled
I was when I found out…”

Almost as thrilled as those long legs of yours are making me, I’m sure
, Mark muses.

“Well, it’s wonderful to hear how enthusiastic you are to join us—I’m sure we’ll love having you here…”

Just as much as I’d enjoy having you straddling me on this chair, and moaning in my ear…

Jasmine blushes as she giggles, and grabs the paperwork coming up from the machine.

“Okay, it looks like I’ve got it all—I apologize again for disturbing you…I’ll close the door behind me…”

“Oh, no disturbance at all!” he assures.  “In fact, that beautiful smile of yours will most definitely be the highlight of my day.”

Taking in a sharp breath heard across the room, blood rushes to Jasmine’s face as she tries to cover her flattered smile with the papers warm off the fax.

“Oh my God, that’s so sweet,” she chirps.  “Thank you, sir—I’m
really
happy they placed me in your department.”

Leaning back in his chair, and smiling over at her as a plan begins to formulate in his mind, Mark replies,

“Once again, the pleasure is all mine.”

Jasmine turns around to leave, taking most of her sweet vanilla scent with her.

Wanting nothing more than to close his eyes, and stroke himself until he can no longer smell her in the air, Mark finds a way to control the urge as he focuses on what he feels is one of his most brilliant ideas ever.

If he couldn’t trust a pretty young thing
outside
of the company, he’d just have to find one
inside
the company who he was sure would keep his secret.

Now, to find out all he could about little Ms. Jasmine…

The next day finds Mark even more curious than the next.

He gets into the office earlier than usual, hoping for some lucky break at finding a lead on his new fantasy girl.

After taking several unnecessary trips to the men’s room (in order to scan the mostly empty office, in which the few people who are already in give him surprised looks), he finds a face that makes him smile, and rushes toward the head of security for the building as he makes his way to the elevator.

“Hey, Ethan—hold on a second!”

Ethan Bradley turns to greet Mark as he nears.

After pulling Ethan aside, Mark takes a quick look around to make sure their conversation can’t be overheard.

“Everything alright?” Ethan questions, with concern.

Playing the Field: A Diamonds and Dugouts Novel by Seasons, Jennifer
Cast in Ruin by Michelle Sagara
The Elopement by Megan Chance
Flameout by Keri Arthur
Dissonance by Stephen Orr
Out For Justice by Taylor, Vicki
The Accidental Species: Misunderstandings of Human Evolution by Henry Gee
The Unquiet by Garsee, Jeannine
Monterra's Deliciosa & Other Tales & by Anna Tambour
The Younger Man by Sarah Tucker