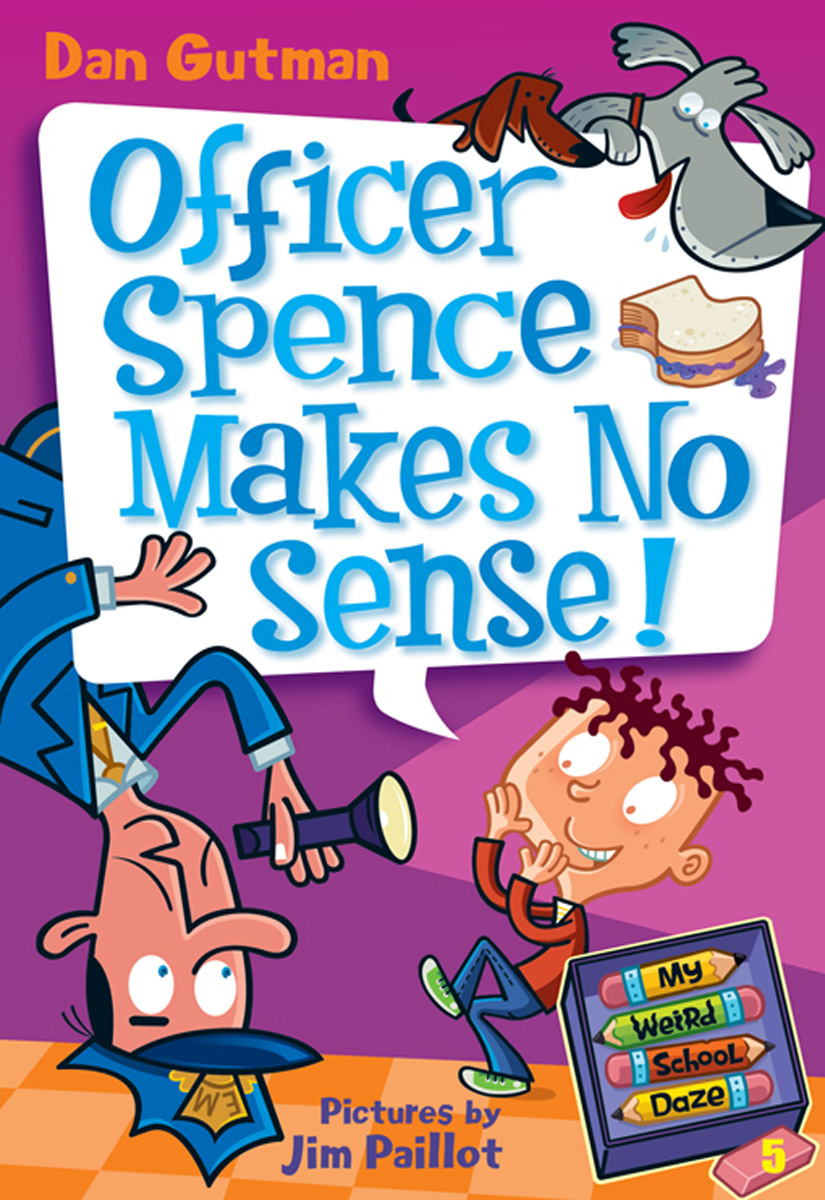 1
The Mystery of the Missing PB&J

3
The Peanut Butter and Jelly Bandit

9
Officer Spence Is Getting Weirder

10
The Peanut Butter and Jelly Bandit Is…

11
Skippy and Jif Save the Day

12
The Truth About Officer Spence

About the Author and the Illustrator 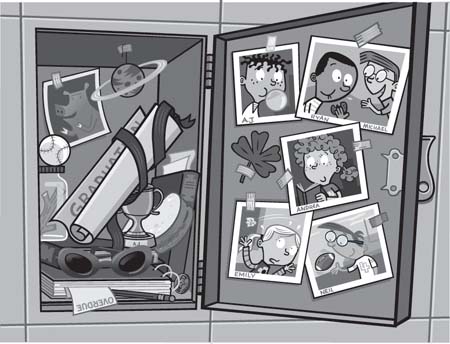 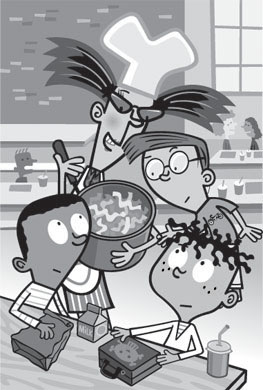 1
The Mystery of the Missing PB&J

My name is A.J. and I hate school.

I was in the vomitorium eating lunch with the guys. Our lunch lady, Ms. LaGrange, was walking around saying hello to everybody.

“Bon appétit!” Ms. LaGrange said when she got to our table.

Ms. LaGrange is from France, so she’s always saying weird stuff like “Bon appétit.” I know that “appetite” means “being hungry” and “bon” means “bone.” So when French people get hungry, I guess they eat bones.

“I invented a new food!” Ms. LaGrange told us. “Would you like to try it?”

I never try new foods. That’s the first rule of being a kid. New foods are yucky. We all looked in the bowl Ms. LaGrange was holding.

“What is it?” asked Ryan, who will eat anything, even stuff that isn’t food.

“Is it noodles?” asked Michael, who never ties his shoes.

“Is it pasta?” asked Neil, who we call the nude kid even though he wears clothes.

Ryan tried some poodlenasta, but the rest of us said it looked gross. Neil opened his bag of Crispy Chips. Michael took out a bag of Crunchy Cheezy Crackos. My
mom packed me a peanut butter and jelly sandwich.

I love peanut butter. And I love jelly. So peanut butter and jelly together is the perfect combination. The guy who invented the PB&J sandwich was a genius. He should get the No Bell Prize. That’s a prize they give out to people who don’t have bells.

This annoying girl named Andrea Young with curly brown hair was at the next table.
*
She was sitting with her crybaby friend Emily. Andrea thinks she
is
so
smart because she’s a member of P.A.C. That’s the Principal Advisory Committee—a group of nerds who get to boss around the principal. Andrea was talking really loud to make sure we all heard her.

“Did you know that girls live longer than boys?” Andrea said.

Andrea reads the encyclopedia for fun in her spare time. What is her problem? I slapped my head.

“Girls do
not
live longer than boys,” I told her.

We went back and forth like that for a while.

“Boys would live longer if they ate healthy foods,” said Andrea. “You shouldn’t eat chips. They have a lot of fat in them.”

I hate Andrea. Why can’t a ton of chips fall on her head?

“So what are
you
eating?” Michael asked Andrea. “Nuts and berries and veggies?”

“My mom packed me some yummy tofu,” Andrea told us.

I’d rather die young than eat food made from toes.

Andrea held up her fork with a piece of that toe food stuff on it. It was white. Ugh, disgusting! It looked like a big toe. I thought I was gonna throw up.

It sounded a lot like “toe food” to me.

That’s when the most amazing thing in the history of the world happened. I opened my lunch box.

Well, that’s not the amazing part, because I open my lunch box every day. The amazing part was that when I opened
my lunch box, there was juice and a bag of chips in there, but
nothing else
!

My peanut butter and jelly sandwich was…
missing
! 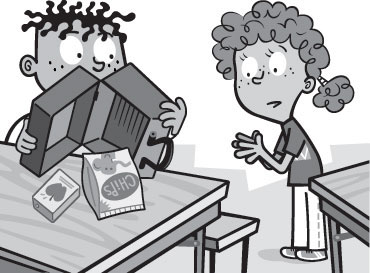 My mom
never
forgets my peanut butter and jelly sandwich! I turned my lunch box upside down just to make sure the sandwich wasn’t stuck to the bottom.

That’s when the weirdest thing in the history of the world happened. Our school security guard, Officer Spence, came running over really fast. He gets to carry cool stuff on his belt—a walkie-talkie, handcuffs, and one of those clubs they use to beat up bad guys on TV.

“Did I hear something about a stolen PB&J?” Officer Spence said. “That’s the third one this week!”

“No, this looks like a robbery to me,”
said Officer Spence.

He grabbed his walkie-talkie and started shouting into it. “We have a Code Red at Ella Mentry School! A PB&J heist! Need backup! Fast! This is an emergency!” 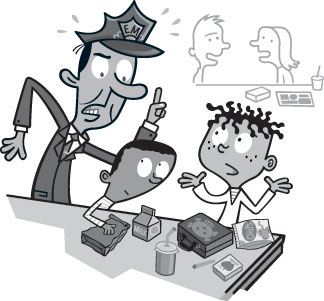 I never had the chance to finish my sentence, because that’s when five big guys in bulletproof vests came charging into the vomitorium! They surrounded our table. It was scary, but cool, too.

“Nobody move!” Officer Spence shouted at us. He took a roll of yellow tape out of his pocket and wrapped it around our chairs. “Don’t touch anything! This is a
crime scene. Nobody leave this room. I’ll have to question each of you.” 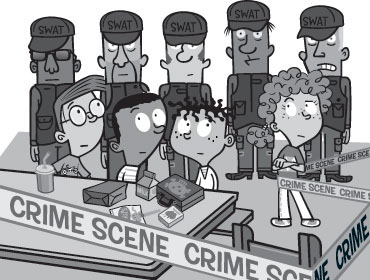 Everybody in the vomitorium was shouting and screaming and freaking out.

That’s when Mr. Klutz came over. He’s the principal of Ella Mentry School, and he has no hair at all. I mean none. His head is so shiny, you can see yourself in it. Mr. Klutz was eating a sandwich.

“Is there the problem here?” he asked.

Suddenly, Officer Spence wheeled around and pointed his finger at Mr. Klutz as if it was a gun. It was just like policemen do to bad guys on TV. 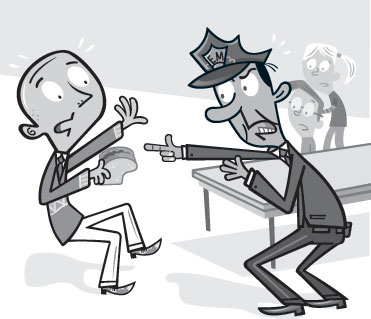 On TV, the police always yell “Freeze, dirtbag!” when they catch a bad guy breaking the law. Nobody knows why.
But I never thought anybody would say “Freeze, dirtbag!” to the principal of a school. It was cool. Mr. Klutz put his hands in the air.

“Step away from the sandwich, Klutz, and nobody gets hurt!” Officer Spence said. “You’re under arrest!”

“On what charge?” Mr. Klutz asked.