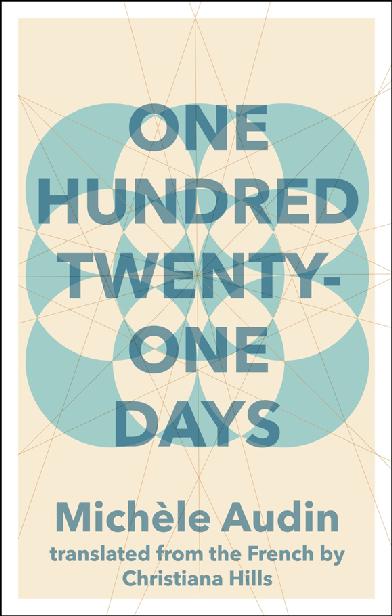 "Audin plays with codes, numbers and dates to create a fascinating and unsettling story."—
Le Temps

This debut novel by mathematician and Oulipo member Michèle Audin retraces the lives of French mathematicians over several generations through World Wars I and II. The narrative oscillates stylistically from chapter to chapter—at times a novel, fable, historical research, or a diary—locking and unlocking codes, culminating in a captivating, original reading experience.

Michèle Audin
is the author of several works of mathematical theory and history and also published a work on her anticolonialist father's torture, disappearance, and execution by the French during the Battle of Algiers.

"Polymorphous and fluid, the book considers how our lives find their shape, and which details are amenable to history’s telling." —
Scott Esposito, *Times Literary Supplement
*

"This is an unconventional novel that has many layers and makes you think about love, history, war, racism, rebellion, caring, and many other things but most of all about telling a story. Highly recommended." —
European Mathematical Society

"This weird little puzzle of a novel is about mathematicians in wartime, and it's only the second book published in English by a female member of the Oulipo. Audin, a French mathematician, scavenges different forms and styles (a fairy tale, a diary, newspaper clippings) to create a sort of literary mixtape. Perhaps the best comparison is Valeria Luiselli's The Story of My Teeth—like that novel, it gives you the rare, head-scratching feeling of not being able to say what exactly makes it so good. Maybe it's the precision of the details—but you wouldn't expect any less from a mathematician, would you?" —
Gabe Habash,
Publishers Weekly
(Best Summer Books 2016)

"A story about mathematics and love . . . Throughout the novel, there is a clash, sometimes explicit, sometimes implicit, between the icy objectivity of mathematical theory and the messy chaos of everyday life. . . . The
120 Days of Sodom
, the notorious unfinished novel by The Marquis de Sade, ends in a simple math problem. It reduced all the atrocities, carnage, and outrage into a formal exercise a student would do for homework. Audin performs the same operation, constantly reducing and distilling narrative until nothing remains but pure numbers. Although, since 20th century history and personal love is involved, the numbers are anything but pure." —
Karl Wolff, *New York Journal of Books
*

"Audin wants us to think about how our stories get told and how our history gets constructed. She never lets us forget that her novel is first and foremost an artifact; she has put its pieces together artfully, but its unique form ensures the artifice is on display. Audin’s Oulipian constraints implicitly argue that wartime narratives — and ultimately all narratives — are necessarily partial." —
Rebecca Hussey, *Full Stop
*

This is a novel for those who like a little experimentation in their fiction...Audin uses a different form for every chapter, including letters, fables, psychological reports, diaries, interviews, newspaper clippings, and more. The effect is stunning. If you’ve read and liked other novels set in wartime, you’ll want to pick this up for an entirely different experience of what the fiction of war can be." —
Book Riot
(Recommended Books)

"Numbers are the markers of human life: dates, ages, addresses, social security numbers, bank accounts, even concentration camp tattoos and prison badges. With numbers we seek to sketch the outlines of—or worse define absolutely—an identity. Memories will fade and stories warp, but records can indicate that so and so was born on this day, that he graduated on this date, that he lived this many years. By tracing the record of when and where, we can attempt to reconstruct a life. But of course there is more to a life than the simple record of place and time. What is a life of a hundred years, marred and disfigured too young, a life of anger and bitterness compared to the brief four months of a young, passionate love affair? How does one truly measure the value of a life lived? Audin doesn’t presume to answer, but her mesmerizing first novel poses the question with artful grace." —
Chris Phipps, Diesel: A Bookstore (Oakland, CA) (Staff Pick)

"In this remarkable first novel from Oulipo member Audin, the lives of French and German mathematicians serve as vectors, but the enduring tragedy of the two world wars remains unsolvable. . . . Audin's smart, deeply empathetic text is enriched by recurrences, coincidences, and invocations of European poetry, including Dante's Inferno and Faust, since numbers alone cannot make sense of the war's aftermath: the lives senselessly ended, spared, or quietly destroyed" —
Publishers Weekly
(Starred Review)

"Audin focuses on a handful of top-flight French mathematicians caught up in the two wars, and this type of character, quite rare in novels, somewhat distinguishes her tale from other similar accounts of the tragic fates awaiting brilliant minds. . . . The story diversifies, at times playfully (à l’oulipienne), but ever with an acute hidden edge. . . . Feeling is in shards, as it were. Given the fate of the European Jews in general and, in this novel, that of André Silberberg and other Jewish mathematicians in particular, a strong point is being made: what matters is not emotional connection, but rather gathering scattered bits of fact, piecing some of the puzzle back together, and restoring the identities and thus the full-blooded faces of those whom the Nazis sought to efface. " —
John Taylor, *Arts Fuse
*

"While not shying from the admission that bald figures can bring us to our knees with despair—just think of the incomprehensibly large numbers of dead in any reporting on genocide—the novel suggests that words turn innocent numbers violent. And it’s the mathematician, finding symmetry in the seemingly senseless, who uncovers the transcendent human stories buried under generations of historical devastation . . . an elegy, an invocation of memory, made all the more bittersweet when told in numbers." —
Amanda Sarasien, *Reading in Translation
*

"A novel that is so original it almost defies description. . . . As the reader works her way through the book’s many voices, the reader experiences a depiction of the processes by which we make choices and compromises during difficult times . . . Given its intellectual and stylistic richness, I don’t doubt that this title will be one of my favorites of the year—and one I’ll be rereading sooner, rather than later." —
What If Knits

"Audin plays with codes, numbers, and dates to create a fascinating and unsettling story."—
Le Temps

Michèle Audin is a mathematician and a professor at l’Institut de recherche mathématique avancée (IRMA) in Strasbourg, where she does research notably in the area of symplectic geometry. Audin is a member of the Oulipo, and is the author of many works of mathematics and the history of mathematics, and has also published a work of creative nonfiction on the disappearance of her father,
Une vie brève
(Gallimard, 2013), contributed to a collection of short stories,
Georges Perec and the Oulipo: Winter Journeys
(Atlas Press, 2013), and edited and annotated an abecedary of Oulipo works,
OULIPO L’Abécédaire provisoirement définitif
(Larousse, 2014).
One Hundred Twenty-One Days
is her first novel and was published to universal acclaim in 2014 by the prestigious Gallimard publishing house in France.

Christiana Hills is a literary translator who graduated from NYU's MA program in Literary Translation, and is currently a doctoral candidate in Translation Studies at Binghamton University in New York.

Winner of a French Voices Award

“What holds the special magic of this text? From its clever construction, and the juxtaposition of its narrative modes…from which emerge the most vibrant, intimate, and passionate voices that tell of sufferings, loves, and pains. A beautiful mosaic work which the reader comes away from moved as if from a dream.” —France TV, Culturebox

MICHÈLE AUDIN
is a mathematician and a professor at l’Institut de recherche mathématique avancée (IRMA) in Strasbourg, where she does research notably in the area of symplectic geometry. Audin is a member of the Oulipo, and is the author of many works of mathematics and the history of mathematics, She has also published a work of creative nonfiction on the disappearance of her father,
Une vie brève
(Gallimard, 2013)—Audin is the daughter of mathematician Maurice Audin, who died under torture in 1957 in Algeria, after having been arrested by parachutists of General Jacques Massu. On January 1, 2009, she refused to receive the Legion of Honor, on the grounds that the President of France, Nicolas Sarkozy, had refused to respond to a letter asking for information on her father, the possible whereabouts of his body, and recognition of the French government’s role in his disappearance. For the Oulipo, Audin has contributed to a collection of short stories,
Georges Perec and the Oulipo: Winter Journeys
(Atlas Press, 2013), and edited and annotated an abecedary of Oulipo works,
OULIPO L’Abécédaire provisoirement définitif
(Larousse, 2014).
One Hundred Twenty-One Days
is her first novel and was published to universal acclaim in 2014 by the prestigious Gallimard publishing house in France.

CHRISTIANA HILLS
is a literary translator who graduated from NYU’s MA program in Literary Translation (French–English) and who received a French Voices Award from the Cultural Services of the French Embassy in the United States for her translation of
One Hundred Twenty-One Days
. Hills is currently a doctoral candidate in Translation Studies at Binghamton University in New York. 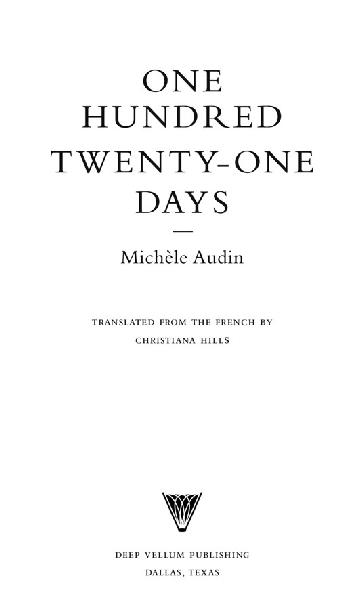