Read One Step Over the Border Online

One Step Over the Border 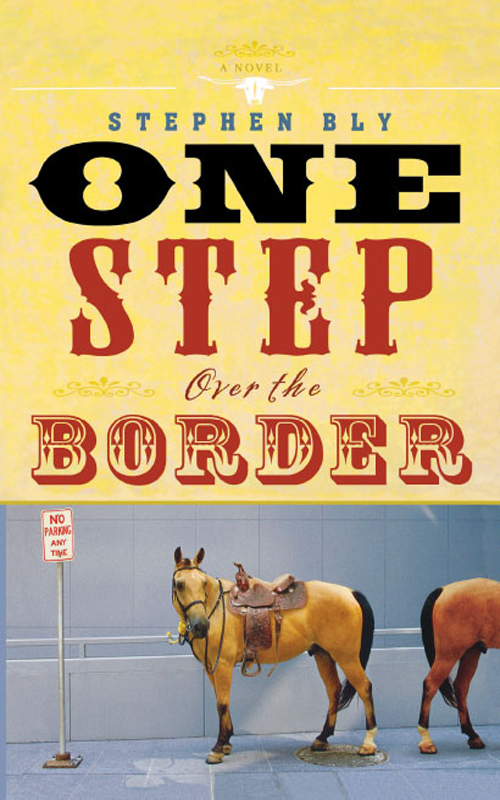 Have you seen my Juanita

for
Christina Boys
who helped make a good story great

It takes a lot of folks’ help to get a project like this one published… special thanks to my friend Chip MacGregor… my editor,
Christina Boys… my agent, Frank Weimann… Cara Highsmith, David Palmer, Lori Quinn, and the whole staff at Hachette Book Group
USA, and especially my wife, Janni-Rae, who has always been my “Juanita.”

T
he yellow dirt road that stretched before him reminded Laramie Majors of the countryside around his grandparents’ place in
Oklahoma. Miles beyond the blacktop sat their two-story, white clapboard house with a front porch swing and sweet tea that
tasted a bit sinful if you’d just come back from church. As a kid, those trips north lined a route of escape from the tension
of home and invited him to a different world. At Grandma’s house, no one yelled. No one got hit. And Mamma never cried.

But the parade of gray sagebrush, dull green scrub cedars, and squatty piñon pines on the rimrock reined Laramie back to Wyoming.
Yellow grime fogged after his truck like a swarm of South American ants, a creeping disease across the fenders of his silver
Chevy pickup.

Dwight Purley had told him to take the shortcut through the south end of the Bighorn Mountains. But Dwight presumed Laramie
knew more about Wyoming geography than he actually did. Although the blonde gal with stubby pigtails and logger’s biceps at
the Sinclair gas station had assured him this was the right way, he now found himself grumbling over her apparent misdirections.

He questioned again if he should have stayed on the pavement out of Casper. This endless dirt road didn’t have the feel of
a shortcut, and the fuel gauge had dropped near empty. He hadn’t seen a ranch, a rig, or an occupied cabin for miles and didn’t
know which direction to walk to find gas. He considered turning back, but the drive to make it there today pushed him over
the next hill. He had promised himself he would not go back to Texas a failure. It was a promise he intended to keep.

Laramie smeared the dirt off the dash and slapped the front of the fuel gauge in hopes that it was stuck, then punched off
the CD player. As he crested the hill, he slowed to a stop as two dozen pronghorn antelopes ambled across the road. They turned
to gawk at his rude intrusion. He stared back at their blank, clueless expressions, wondering how many times the same look
plastered his own face.

The thin blue Wyoming sky unfolded to the west. Hills gave way to rolling sage and brown grass prairie. As he dropped down
into a cottonwood draw, he spied a log cabin. Its battered shake roof sported a new satellite dish receiver. Thick gray smoke
curled from the chimney. A girl of about ten scampered from the outhouse wearing red striped shorts, cowboy boots, and a Nike
T-shirt.

She waved, then disappeared into an unpainted barn.

Laramie waved back. She was the first person he’d seen in almost an hour.

Eight miles further west he reached Highway 20. He turned north and followed the green highway signs and bright hotel billboards
that lured him toward Cody. He rolled down the windows, hoping to blow out some dust. And memories.

Majors parked his pickup under the only shade tree on the level street. He studied the scrap of scribbled brown paper:
Hap Bowman, 2490 Paradise Road, Cody, Wyoming
.

The home looked like a 1960s tract house, only there were no other residences. No landscaping. No parks. No sidewalks. No
neighborhood improvement association. Just one dwelling in bad need of paint on stucco with fake brick walls.

The wide, empty street led to nowhere. Laramie fastened the top button on his collar and practiced a crooked smile in the
dusty mirror. He knew it was time to cowboy up, to get his small talk in gear. No one discerned how tough it felt for him
to meet new people.

A 1992 black Dodge truck was backed into the driveway. Behind it, on eroding blacktop, a wheelless Volkswagen van perched
like a miniature diner, propped up by cinder blocks and weeds. A battered canvas awning stretched out the side. A dust devil
that had spawned in the vacant lot next to the faded green house seemed reluctant to leave. Laramie watched the dirt swirl
a moment as if waiting for an oracle to make a pronouncement.

An aluminum screen door hung crooked, slammed too hard, too often. A half-built front deck stretched out into sunburnt grass,
its gray-bleached boards a testament to a long-abandoned building project. The black dog asleep on the porch defied pedigree,
but Laramie noticed a huge pink tongue hanging out.

Once again, he studied the penciled note, then surveyed the yard. He detected no horse. No barn. No corral. No run-in shed.
Not even a plastic steer head stabbed into a bale of hay. Not one sign that this guy ever practiced roping.

Laramie brushed his gritty fingers through short, curly brown hair and rubbed his clean-shaven chin. He took a deep breath
and muttered, “Mr. Dwight Purley, you said I needed to meet this Hap Bowman. You said he could head rope a steer as good as
anyone in Wyoming. I will trust you enough to knock on that door. But this scene better improve quick, because it isn’t looking
real good right now.”

When Laramie reached the front step he patted the dog, but the animal showed no interest in him. Afternoon heat reflected
off the walls like a radiant electric heater in winter. Laramie longed for the comfort of a glass of Grandma’s sweet tea or
the throat-clearing rush of an ice cold beer.

He scraped open the busted screen door, hesitating to knock on the peeling white paint of the wooden one when he heard a blast
of angry Spanish words, followed by a loud crash and a yelp.

Laramie ground his teeth, then checked the note one more time:
2490
. He eyed his truck and considered a hasty retreat when a man hollered from inside, “Juanita! Put that down.”

Even the dog flinched when the lid to a white porcelain commode busted out the front window, scattering glass on the unfinished
deck.

“Ehhh… Hap Bowman?” Laramie stammered. “Dwight Purley sent me to ask you about…”

The shorter man grabbed his outstretched hand and yanked him indoors. “Man, am I glad to see you.” Then he barreled outside,
the door slamming behind him.

The room reeked of garlic and dirty diapers. A divan sprawled backward. A slice of pizza plastered the wall. Majors heard
a roar from the yard and peered out the busted window in time to view the Dodge pickup spin out into the street and head south.

The bristles of a broom smacked Laramie’s ear. The surprise, more than the impact, staggered him into the trash-covered pine
coffee table. He cracked his shin and hopped around the room trying to flee his attacker.

“Who are you?” the dark-haired lady snarled. Her full lips were painted as red as her long fingernails.

She walloped him in the side, then jabbed his ribs with the broom handle. “Well, you did intrude. Where’d Hap go?”

Laramie hunkered behind a cluttered, mucky end table. “I wish I knew. He’s the reason I stopped by. I need to talk to him.”

The brown-skinned woman yanked open the gauze curtain. “It figures he’d run out on me.” She spun back. “What are you staring
at?” She grabbed up a jar of baby food and cocked her arm.

Laramie shielded his face. “Wait, lady. Whoever got you angry, it’s not me. I was told to come talk to a Hap Bowman who lives
here.”

“I guess that’s my mistake.”

“Then I’ll be leaving. I just wanted to talk to Hap. Sorry for the inconvenience.”

“Inconvenience? The jerk ruined my life. Look at me. Look at me! He turned down all of this.”

“I’m sorry for whatever’s going on here. But I never met Hap before. I have no explanation for his behavior. I’m a roper and
I was told that…”

The pureed peaches sailed at his head. Laramie ducked. The glass jar crashed into the black iron table lamp, which tumbled
to the soiled green shag carpet.

Laramie retrieved the lamp and shoved it back on the table. “I take it you don’t like ropers.”

“What he did to me wasn’t right.” When she tossed her head back, a wave rolled down the massive black curls.

Laramie scooted toward the front door. “I really need to get on down the road.”

“That’s what they all say.” The fake yellow flowers tumbled out, but the orange pottery vase flew across the room and shattered
on the wall below a Clint Eastwood movie poster.

Laramie’s hand clutched the sticky brass door handle. A baby’s cry wafted in from a back room.

“Don’t you dare move. I want to talk to you.” The woman scooted down a carpeted hallway and into the next room.

Common sense told Laramie to run, to dive through the glass shards of the broken window if needed. But as he had hundreds
of times before, he froze, unable to escape the person who confronted him.

A diaper-clad, cocoa-skinned boy with thick black hair and a round nose rode her hip when she returned. “What did you say
your name was?”

“I’m Juanita and this is Philippe.”

“Pleased to meet you both. I presume that’s Hap’s little boy?”

“Why do you presume that?”

“Do you think I would make love with some scrawny cowboy who treated me that bad?”

“I am not an easy woman. Is that why you are here? Were you told Juanita has no virtue?”