Read One Was a Soldier Online

One Was a Soldier 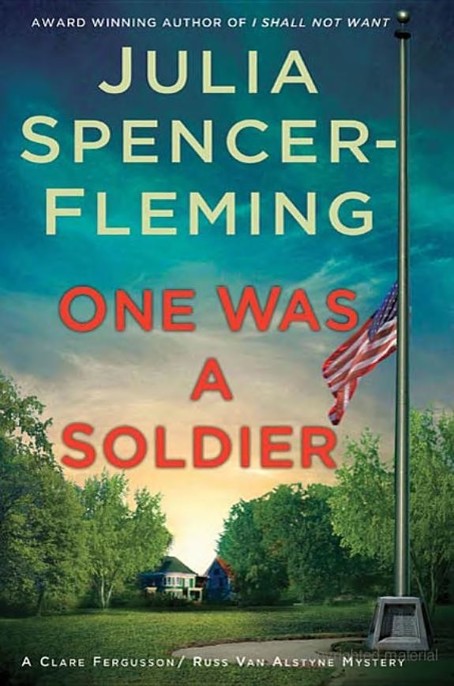 To the woman left holding the flag.

“Mother whose heart hung humble as a button

On the bright splendid shroud of your son,

Thanks to my husband, Ross Hugo-Vidal, and to my children, Victoria, Spencer, and Virginia Hugo-Vidal. Without their love, support, and willingness to eat a lot of spaghetti-and-canned-sauce dinners, I couldn’t be a writer.

Thanks to everyone at St. Martin’s Press/Minotaur Books, especially Pete Wolverton and Katie Gilligan. Their keen editorial insight and well-thought-out suggestions (and suggestions, and another round of suggestions!) shaped this book.

I would not be published by Minotaur if the legendary Ruth Cavin hadn’t picked my maiden manuscript out of a pile of contest submissions. She was a teacher, a drinking partner, a creative lifeline, sometimes a bit of a noodge when I was running behind, and always a pleasure to work with. She died before this book came to print, but her influence lives on in my work, and in the work of every writer who was fortunate enough to call her “my editor.”

I talked with a number of veterans and service members while writing this book. Particularly, CH (LTC) Linda Leibhart, USA Reserve, planted the seeds for this story during a long conversation in a bar in Bath, New York. Senior Chief Hayley (Zeller) Hutchin, USN, generously shared her many experiences of deployment and coming home. As ever, LTC Les Smith (Ret.) and Timothy LaMar, late of the 101st Air Mobile, inspired me. I know none of you likes to hear, “Thanks for your service,” so I will simply say: Thank you.

I Believe in … the Communion of Saints …

O Almighty God, Who Hast Compassed Us About with So Great a Cloud of Witnesses …

You Are No Longer Strangers and Sojourners, But Fellow Citizens with the Saints and Members of the Household of God.

That It May Please Thee to Grant That, in the Fellowship of All the Saints, We May Attain to Thy Heavenly Kingdom.

Help Us, We Pray, in the Midst of Things We Cannot Understand, to Believe and Trust in the Communion of Saints …

But I Have Squandered the Inheritance of Your Saints, and Have Wandered Far in a Land That is Waste.

Fear the Lord, You That are His Saints, for Those Who Fear Him Lack Nothing.

In That Kingdom Where There is No Death, Neither Sorrow Nor Crying, But the Fullness of Joy with All Thy Saints …

I BELIEVE IN … THE COMMUNION OF SAINTS …

—The Apostles’ Creed, The Book of Common Prayer

Sarah Dowling’s first thought, peering through the wire-reinforced glass of the community center’s door, was that they were an odd group. Usually returned vets had a lot to talk about with one another, even if they were embarrassed to be seen in counseling. She would have thought that in a tiny town like Millers Kill—she couldn’t help it, she still saw the place as a cross between a Thomas Kinkade painting and Bedford Falls—they’d be even easier together, but none of these soldiers were speaking to each other.

The two men unracking metal chairs could have been father and son; both middling height, in khakis and button-downs, both with regulation crew cuts—the fifty-something graying, the thirty-something dark brown. The younger man kept glancing sideways at the older as if looking for clues on how to behave. He didn’t pay attention to the young woman opening the chairs in a ragged circle, watching him. She was maybe midtwenties but dressed like a teen, with a little muffin top squeezed between low-rider jeans and a mini-tee. Sarah would have to include her no-romantic-relationships spiel in tonight’s session.

The other woman in the group was a decade or more older than the little cutie, wearing unrelieved black that almost hid her taut physique. As Sarah watched, she stirred spoon after spoon of sugar into coffee poured from the community hall’s industrial-sized coffeemaker. The last participant—Sarah frowned. A young man, maybe still a teenager. His hair had grown out, indicating he’d been out of the service for several months, at least. Well, she could have guessed that even if he had still been wearing it shaved to the skin. They didn’t let double amputees out of Walter Reed until at least four months after admission. His presence here worried her. If he was having post-amputation issues, he ought to be seeing a psychologist at the VA Hospital, not hanging around an LCT’s group.

She checked her watch, then gathered up her stack of handouts. Time to get the road on the show. She opened the office door and strode into the meeting room, the soles of her shoes squeaking on the polished wooden floor. Beyond the closed door, she could hear the faint thump and holler of the basketball game going on in the gym. On the far wall, construction-paper letters spelling out
HELLO SEPTEMBER
were taped over bright cutouts of apples and school buses. A preschool met here mornings. She thought of the stiflingly tasteful tenth-story office she had left behind in Silver Spring.
Free at last, free at last
.

“Hello, everyone.” She gestured toward the chairs. “Why don’t we get started? If we have any latecomers, they can join us in progress.” She smiled and took her own advice, selecting the twelve o’clock position in the circle. The woman in black pulled two chairs out of the way to make room for the teen in the wheelchair. The rest of the gang of five followed suit, scraping and clunking the cheap chairs until they were all roughly equidistant from one another, and twice as far from her.

“I’m Sarah Dowling,” she began. “I’m a licensed clinical therapist. For those of you who aren’t familiar with the term, that means I’ve been trained in psychology and in facilitating therapy, but I am not allowed to diagnose or to prescribe medications.” She stood up and handed the first stack of papers to the graying man seated to her left. “Take one and pass it along.” She resumed her seat. “I’ve just recently relocated here from the Washington, D.C., area, so this is my first group in New York State. However, I’ve been doing veterans’ counseling and running the on-base family mental health program for the past four years at Fort Meade.”

The older man nodded in approval.
Officer,
she thought.

“Just to make sure we’re all on the same page, this is not a Veterans Affairs program, although it does receive funding from VA, as well as from New York State and the National Institute of Mental Health.” She leaned forward. “Participating in our group will not affect your VA benefits or treatment, nor will it be in any official record.” For those in the group who would be continuing on in the service, that was often critical. Seeking out therapy was still viewed in many quarters of the military as suspect. Talking about feelings was not a high priority for the average CO.

“I apologize for scheduling the first session on Labor Day, but the community center gave me this time slot, and I didn’t want to lose it.” She smiled at them. “I was afraid I’d be the only person here, so believe me when I say I’m glad to meet you all. Why don’t we start by introducing ourselves, and saying a little something about our service.” She looked encouragingly at the older man.

He looked around the circle, knitted up his brows as if he didn’t understand the reasoning behind her request, then shrugged. “Sure. If you think it’s helpful.” He straightened in his seat. “I’m George Stillman. The Third. I’m a doctor and a lieutenant colonel in the Army National Guard. I was with a forward surgical team outside Mosul.”

“When did you get back, George?”

He smiled a little. “Please. Call me Trip. I hear George and I look around for my father.”

“Oh. I got back from my second tour of duty about two months ago.”

The kid in the wheelchair looked at him oddly. “Three months ago. You were here in June.”

The doctor stared at the kid for a moment, then wrinkled his face into an apologetic smile. “Sorry. We had a death in the family this summer, and I swear it’s thrown my whole sense of time out of kilter.” He tapped his palm. “I’d better start carrying my PalmPilot around again. My wife calls it my portable brain.”

Sarah smiled reassuringly at him before gesturing to the young man. “Would you introduce yourself?”

“Yes, ma’am.”
Marine,
she thought, just as he said, “I’m Lance Corporal Willem Ellis, of the 5th Marine Division.” He looked down at the prosthetics strapped to his knees. “Formerly of the 5th Marine Division.” He glanced back up at her, then dropped his gaze. “I was only in-country a little over two months when this happened, so I can’t say I saw much traumatizing action.”

“How ’bout when your mother found out you’d enlisted?” Sarah was surprised by the black-clad woman’s accent, a southern Virginia drawl that sounded more out of place up here in the North Country than her own clipped urban consonants.

Willem Ellis laughed at the woman’s remark. “Yeah, I guess that counts as combat. Or at least battle royal.”

The woman slouched in her seat. “Clare Fergusson.” There was a pause. Sarah made a go-on gesture. Clare Fergusson sighed. “Major in the Guard, 142nd Aviation Support. Stationed in Ramadi, Tikrit, and Kirkuk.” She took a long drink from her coffee cup. Nothing more seemed forthcoming.

“She flies helicopters,” the brown-haired man said. Before Sarah could ask, he went on, “I’m Eric McCrea. I’m a sergeant. Also in the Guard.”

“Did you serve with Major Fergusson?”

“No.” His gaze slid away from her and came to rest on the doctor. His lip curled up in what might have been a sneer. “I’m an MP.”

“What were you assigned to?” the young woman demanded. “Were you on base patrol? At the Green Zone?”

His lips thinned. “I was on prisoner detail. Camp Bucca.”

Sarah kept herself from reacting, but the rest of the group stared. They had all seen the pictures.

“That figures.” The young woman folded her arms over her generous chest.

“That has nothing to do with it.” Eric McCrea’s cheeks blotched with color. “You think you know what it was like—”

Sarah held up her hands. “Stop right there.” She gave both McCrea and the girl a measured look. “Let’s not go jumping in the deep end before we’ve finished getting our toes wet.” She dropped her hand, opening it to the last person in the circle. “Why don’t you introduce yourself.”

The brunette braced her hands on her thighs. “My name’s Mary McNabb, but everybody calls me Tally.” She looked at Stillman. “Sorta like you, I guess. I was formerly a specialist, formerly in the United States Army.”

“Where did you serve, Tally?”

That got some whistles from the rest. “Mortaritaville,” Fergusson said.

“Yeah, well.” McNabb ran her hands through her short hair.

McNabb laughed. “I was helping my husband fix it up for resale. I’m impressed you remember.”

Sarah put her hands up again. “Wait.” She looked around the circle. “Do you all know each other?”

Sarah stopped herself before she could ask them to explain. She’d need a clearer picture of their interrelationships eventually, but right now she wanted to focus on opening the first door to whatever issues they might have. “We’ll get into that later,” she said. “I’d like to start by discussing your homecomings.”

Their dispatcher, Harlene, had managed to get a red, white, and blue
WELCOME HOME, ERIC
banner printed up and hung from the front of the Millers Kill Police Department. It billowed and snapped in the warm wind gusting up Main Street.