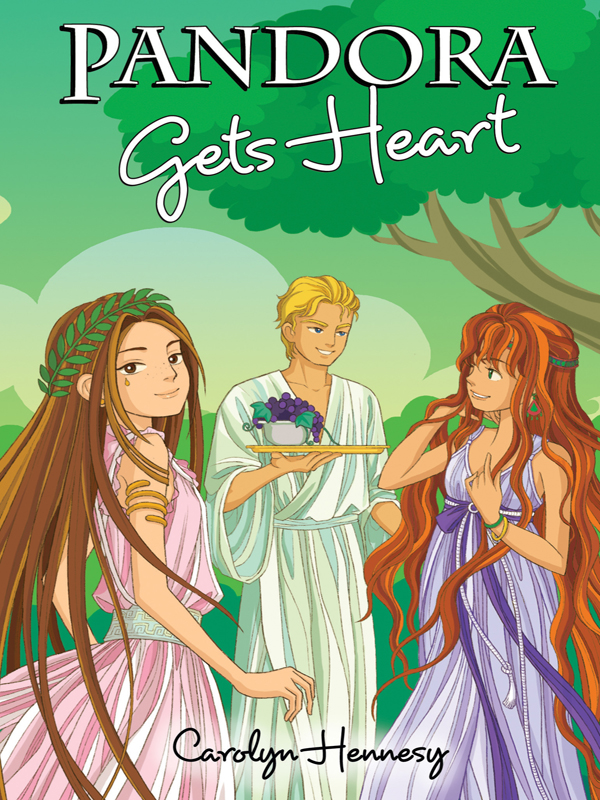 All rights reserved. No part of this book may be used or reproduced
in any manner whatsoever without written permission from the publisher,
except in the case of brief quotations embodied in critical articles or reviews.

Summary: Pandy, Alcie, Iole, and Homer face many dangers
as they make their way to the sacred Mount Ida in Phrygia
to capture another deadly evil—lust.

All papers used by Bloomsbury U.S.A. are natural, recyclable products
made from wood grown in well-managed forests. The manufacturing processes
conform to the environmental regulations of the country of origin.

CHAPTER ONE: The Ruse

CHAPTER ELEVEN: Not So Fast

CHAPTER ONE
The Ruse

Iole was moving on tiptoe.

She’d heard giggling from the cabin. And an occasional high-pitched shriek. Which meant they were in there . . . laughing about something. What? Her?
At
her? How they had completely overlooked her? Forgotten all about . . .

In the girls’ cabin, aboard the ship bound for Thessaly, Pandy and Alcie were clutching their sides with glee, wiping tears from their eyes and slapping the air (and each other) playfully.

In the corridor, Iole crept to the cabin door, her ear pressed against the wood. She caught single words, bits of sentences.

Just then the ship leaned hard to one side and Iole was slammed up against the door.

“Oooff,”
she cried, then quickly covered her mouth. Instantly, the sounds inside the cabin stopped. As she was backing down the corridor, she thought she heard a “shhh” but couldn’t be sure. About five meters away, she began singing loudly, walking toward the cabin again. Opening the door, she found Alcie sitting on the end of her cot, brushing her red hair, and Pandy, on the floor, playing with the enchanted rope Athena had given to her. Both girls looked supremely calm.

“Hey, Alcie,” Pandy said, not immediately looking up, “how small do you think this rope could get without disappearing entirely? . . . Oh, hi, Iole.”

“Hi,” she said, still standing in the doorway.

“Yes,” she said flatly. “I went up on deck to take a last look at Crete in the distance.”

“A certain number of years.”

“Hey, Alcie,” Pandy said, pinching the skin on top of her thumb to keep from laughing, “speaking of home, what’s the first thing you’re gonna do when we get back?”

Iole wondered if they were ignoring her on purpose. She slowly started to clench her hands.

“Oh, lemon rinds, after I write to Homer? I’m going to go find the biggest, most beautiful, most expensive girdle and make my dad buy it for me as a present.”

Now, turning her head away, Iole was getting angry.

She knew that neither of her best friends had her superior brain power (not even combined could they match her) and that getting them to, just once, remember something
this
important on their own was next to impossible, but that’s why she’d left clues for the past three days. She had casually whistled the tune to “Happy Maiden Day to You,” talked about her fifth birth-day party as they sailed past Crete, and even mentioned what her favorite present had been that day— a signed first edition of Plato’s
The Republic
. (“At the age of five?” Pandy had asked incredulously. “Naturally,” Iole replied.)

She willed herself to relax her tightly curled fists and turned, smiling, back to Pandy and Alcie.

“Okay,” she said casually, “so you guys don’t have any big plans for the rest of the day?”

“Great. I guess, since we put into port at Iolcus tomorrow, that we’ll all just relax.”

“Sounds good to me,” Pandy said.

“Apricots,” said Alcie, flinging herself back on her sleeping cot, “I’m just gonna lie here until evening meal. Might not even get up then.”

“Right,” said Iole. Then she spotted a beautiful emerald bangle, which belonged to Alcie, lying on the end of the cot as if it had just been casually tossed there. “Just one more hint,” she thought. “Give them just one more chance to prove they aren’t complete imbeciles.”

“Oh, Alce,” Iole said, picking up the bracelet, “you went through so much to hide this from the pirates and guards on Atlas’s mountain. By Zeus, you had to hide it in your mouth.”

“It’s no laughing matter, Pandy. Alcie’s mouth almost wasn’t big enough. Alce, you shouldn’t leave this lying around. It’s stunning. This is one of your Maiden Day presents, is it not?”

“Well, at any rate, that must have been a special day for you. Your Maiden Day,” Iole said, and then glanced at Pandy. “You, too, Pandy. Turning thirteen! I mean, not simply the presents, but the status, the importance, the recognition from your community, family . . . and friends.”

“Yes, I suppose,” Pandy replied, yawning. “It seems so long ago, I don’t really remember.”

Pandy got up off the floor and lay down on her own cot with her face toward the wall, effectively ending her part in the conversation.

Throwing open the cabin door, she collided with Homer, who instantly threw his right hand behind his back and tried to look as innocent as possible as he slipped into a ridiculous, open mouthed half smile.

Iole just stared at him, her little chest heaving with fury.

“What?”
she finally yelled.

“No, you didn’t, did you!” Iole cried, marching down the corridor to the stairs leading on deck. “You most certainly
did not
!”

Homer stepped into the cabin and closed the door. Instantly Pandy and Alcie burst into peals of laughter. The ship rolled again, sending Pandy sprawling back onto the floor, and the two girls became hysterical.

“I cannot— I repeat— I cannot keep this up much longer,” Alcie said. “Three times this week I came so close to spilling the broadbeans.”

“It’s just till tonight,” Pandy said, picking herself up and sitting on her cot. “It’s all prepared, right, Homer?”

“I just did, like, a final head count. All the Thracians, the Sithonian families, the two sisters from Imbros, the Roman consul to Thessaly, his wife and two of his consorts . . . uh, the third is still seasick, and the crazy cucumber salesman from Arabia and his two sons. Basically everyone Iole has even spoken to for the last six days. They can’t wait. Oh, and I checked with the cook. He’s making some cool veggie things for Iole and he’s baking a special ‘Vesuvius’ cake with anise seeds around it that spell out ‘You’re a Maiden Now!’ He’s adding something called chocolate. A traveler on another ship gave him a little bit and he’s been waiting for just the right time to use it. Says he’s gonna heat it up and send it out of the cake like lava, and it’s gonna trickle down and cover the anise seeds like they were Pompeii!”

“You’re a little too excited by the lava, Homie,” said Alcie.

“Fantastic! Gods, it was all so much simpler when Iole wasn’t a vegetarian,” Pandy said. “All right. Now, Alcie, you’re giving her the bracelet . . .”

“My grammy Urania gave this to me on my Maiden Day,” Alcie said as she wrapped the emerald bangle in a small piece of gauze. “But I’ve seen Iole looking at it when she thought I wasn’t noticing; she’ll love it. And Aunt Medusa accidentally turned Grammy into a statue, so it’s not like she’ll find out. Besides I have drawers full of stuff like this back . . . home.”

Suddenly, the cabin was quiet. Everyone was thinking exactly the same thing. Alcie looked at the floor.

“We’ll get
home,
Alce,” Pandy said softly, touching her friend’s arm. “Your dad will buy you that girdle.”

“Grape seeds, of course we will,” Alcie said brightly, after a moment. She straightened her shoulders. “Homie, what’d you get her?”

He held out his right hand.

“You got her a piece of leather?” asked Pandy.

Alcie took the tightly rolled leather and untied the thin hemp string around it.

Together, the girls read:

“I’m going to teach her to protect herself,” Homer said when neither Pandy nor Alcie had spoken a word and simply stared at him.

“Because it’s
her
present,” Homer said, “and after what we’ve put her through, making her think that we all forgot, she’s got to feel, like, special, y’know?”

“I’m giving her my tortoiseshell hair clip. I don’t need it. I can tuck my hair back behind my ears now anyway.”

Pandy reached into her bag for the clip, but instead, her fingers found a small calfskin bag bound with a black cord.

Opening it, she found a smaller calfskin bundle and a papyrus tag, which read, “To Iole, From H.”

“I showed you my gift. That’s not from me!” Homer said.

“
H
for Hermes?” asked Alcie as Pandy opened the bundle.

There in her hands lay two of the most astonishing earrings either girl had ever seen. One earring was the face of Iole’s mother and the other her father, wrought in delicate curves of gold, silver, and precious stones. The hair on each seemed to actually be flowing, and the eyes, tiny agates, seemed to shift their gaze between Pandy and Alcie. Suddenly, all three realized that the faces actually
were
animated. Silently laughing, smiling, winking, and blowing kisses to each other.

“
H
is for Hephaestus!” Pandy gasped. “Only the God of the Forge could work metal into something this beautiful.”

Suddenly, they heard a cry from above.

Pandy went to rewrap the earrings and found the bundle in her hand already tied. The papyrus note attached read, “You peeked, but I forgive you. H.” for a brief moment, then returned to its original message.

Pandy quickly found the hair clip and was wrapping it in a small piece of gauze on her way out of the cabin. She was thinking about the earrings and suddenly wishing that, if it meant getting presents like that, she were turning thirteen all over again.

Pandy, Alcie, and Homer searched the deck for a full ten minutes before finally coming upon Iole sitting cross-legged amidst some crates of dried goat.

Iole didn’t look at them, but they could tell right away that she’d been crying.

“Not hungry?” Pandy said. “You only had a teeny bowl of creamed oats at first meal and nothing since then.”

Pandy, Alcie, and Homer were at a complete loss. Iole wasn’t going to budge.

“Well then,” Pandy said, suddenly struck with an idea, “we’ll all just sit here with you and the goat and chat, okay?”

“You’re surrounded by goat,” Pandy said, pointing to the crates.

“What?” Iole said with a start.

Homer pointed to the lettering on the side of a nearby crate.

Iole bolted to her feet, her jaw set tight. At last she expelled a huge breath.

“Oh, never mind. I certainly won’t be the cause of all of you not eating,” she said, striding away. “It’s of no consequence that nobody cares about
me
. And now I need to look before I sit anywhere!” they all heard trailing on the wind.

Approaching the dining hall on a lower deck, Alcie suddenly slipped by the others and ran swiftly ahead, disappearing though the doorway.

“Oh,” said Pandy nonchalantly, “she’s just making sure that there are four seats together.”