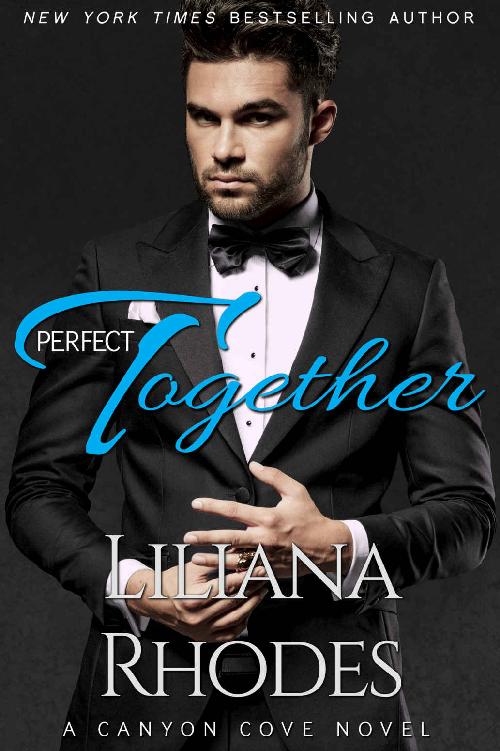 “Have you ever thought about being more than friends?”

Becca Draven’s life has changed in ways she never imagined. She has a job she loves and a wonderful group of friends, even if they keep telling her she needs a boyfriend. The last thing Becca wants is a man in her life. All they do is complicate things. Besides, she already has one – her best friend Gideon.

Gideon Kohl is an architect on the rise and after several high-profile projects, everyone wants a piece of him. He’s always loved being the center of attention, but lately there’s only one person he cares to be around – his best friend Becca. And with his brother Gabriel telling him they’re perfect together, Gideon can’t help but see Becca in a different light.

Can friends turn into lovers?

While
Perfect Together
is a standalone romance, it takes place after the events of Canyon Cove #1,
Playing Games
.

All rights reserved.
No part of this book may be reproduced, scanned, or distributed in any manner whatsoever without written permission from the author except in the case of brief quotation embodied in critical articles and reviews.

"Gideon Kohl, architect extraordinaire," I said as I took the sharp curve out of the glass tower of my penthouse apartment.

"It's Gabriel," my brother said. In the background, I heard a gruff voice yell something about a speed bag. "Are you nearby? I'm at the gym meeting some new fighters. I need to talk to you about the South End project."

The South End project was a grant created by my brother, Mr. Mixed Martial Arts, Gabriel Kohl. The intent behind it was to fix up the shitty neighborhood he and I grew up in and make it safe again. I was working as the project architect with my friend Becca Draven, who was managing the project.

Shit,
I thought.
He was supposed to keep his mouth shut.

"I thought you were only staying on the project until you completed your licensing hours," Gabriel said. "He told me you're still showing up there at least once a day."

"I don't see what the big deal is. I'm working pro bono and he knows that."

"I don't know, Gideon. He said something about insurance. I'm too busy to get involved with this crap. If you're done with your hours, then you don't need to be there anymore."

"Becca is shorthanded. I'm helping her out."

Gabriel laughed. "Is that what this is about? Let me guess, you love her and can't live without her. I've heard this way too many times before."

"Gimme a break, we're just friends. That's all. You know I've got my sights set on Cassie. Any day now she'll get tired of your old ass and upgrade to the newer model," I joked.

"Keep your eyes off my wife," he said.

"It's not my eyes you should be worried about."

"I've told you, Gideon, she's off limits. I'm not joking. You know I can still kick your ass."

"Okay, okay. Jeez, lighten up! I was just kidding."

"Back to Becca," Gabriel said. "She doesn't need your help. Maybe you should think about why you're still going to City Hall every day."

"I don't know. I know you, Gideon. I don't think you can really be friends with a woman."

"What makes you say that?" I asked.

"Because we're men. Say what you want, but eventually the sex always gets in the way."

He hung up before I could argue. He didn't know what he was talking about. Becca and I had been great friends for a while now. Nothing would change that.

I pulled into the small parking lot behind City Hall and found a spot next to Becca's red pickup truck. I pushed my sunglasses up the bridge of my nose to shield my eyes from the bright sky as I stepped out of my car. As I glanced at the wide brick building in front of me, I couldn't help but grimace. It was one of those places where people groaned when they talked about going to work, and I definitely saw why.

City Hall was located downtown in Canyon Cove. It was an old brick building with a tall clock tower in the center. Surrounding City Hall were tall skyscrapers that would lead some people to believe they were in a big city, but it really wasn't. Canyon Cove was large in terms of size, but most people who lived there were connected to each other somehow.

The stench of stale coffee struck me as I entered through the side door. Above, the fluorescent lights buzzed as they reflected off the pale green floors. The building reminded me of the hospital my mother was admitted to before she left us. It was part of the past that I wanted to forget.

I pushed away the memory as I entered the office I shared with Becca. She was the only reason I tolerated this place. I didn't have to show up anymore, but I looked forward to spending the day with her.

Becca's light brown hair was pulled back into the same sleek ponytail she wore every day in the office. Each strand of her hair was carefully in place. Even her bangs, which grazed the top of her eyebrows, knew where and how they should lay.

She drummed her fingers on the old metal desk as she stared at her computer. A pair of oversized plum-colored glasses rested on her nose. Becca wore them because she thought they hid her freckles. She never said that, it was just something I knew about her. I thought the oversized frames accentuated her freckles even more, but I'd never admit that to her.

The combination of her freckles and her rarely wearing makeup, made her look much younger than she really was. People always gave me slack for not looking my age, but Becca looked even younger and she was three years older than me. Even though she was twenty-eight, she could easily pass for my little sister.

Becca was cute in a girl-next-door kind of way and the furthest thing from my type. It was probably why we became such good friends.

"Hey there, beautiful," I said.

I leaned against her desk, whipped off my sunglasses, and gave her my best seductive stare as I eyed her conservative pale blue cotton button-down shirt and slacks.

"There you are," she said, her eyes glued to the computer. "I know that look." She wagged her finger at me but kept her eyes on the screen. "I don't even need to look at you." She shifted uncomfortably in her seat. "Now stop it. You know I'm immune to that crap."

I shrugged. "It's how I greet all the beautiful ladies. Works every time."

She rolled her eyes and grabbed her pen then proceeded to jab my ass with the push button end. The pen clicked repeatedly as she kept poking my jeans.

"Off my desk," she said, trying not to laugh. "God only knows where your ass has been."

"You think I'm going to give your desk cooties?"

"Knowing you, you probably already have," she said with an evil grin. "How was your weekend?"

I dropped into the squeaky chair behind my desk, directly across from hers, and ran my fingers through my hair. Call it vain, but my hair needed to be the perfect combination of messy and fixed. Women always said they loved my hair.

"Quit it with the hair, Gideon. It's just you and me here. No one to impress."

"You just can't handle how good I look," I said playfully. "You wish you could rock the organized chaos look."

She rolled her eyes again as she laughed.

"So you want to know about my weekend. You mean besides all the stuff you already know?" I asked.

"I'm sure you don't tell me
everything
."

"Oh but I do. The escapades of Gideon Kohl are all yours for the asking. Who else would put up with me?"

"Sorry, I know." She took her glasses off and placed them on the desk before rubbing her eyes. "I'm a little out of sorts today. I'm feeling overwhelmed with this whole fundraiser thing."

"Yes, the Boone fundraiser in two days. It's all you talked about this weekend."

I leaned back and yawned dramatically to remind her how dull I found the fundraiser. The chair let out a low groan as I put my feet up on the desk.

"I know, I'm sorry. I don't mean to be so boring, but do you have any idea how much we need to raise?"

"Well, you know raising is my specialty. I can always get it up."

I wagged my brows at her lasciviously. She shook her head with a look of disgust.

"You can turn every conversation into sex, can't you?"

"Who said anything about sex?" The corners of my mouth tugged upwards as I tried in vain to look innocent. "Obviously you're the one with sex on her mind."

"Me??? You always have sex on the brain. Even just now you said you can always get it up."

"Yes, Becca, the funds. I can raise the funds. Get your mind out of the gutter. Jeez."

She scrunched her nose at me, and I wondered what was going on in her head. I loved teasing her and she could give it as good as she got it, but I always won when it came to talking about sex. That was the one topic she always got flustered about.

"Then what about the other night? I know you were thinking about sex then," she said, her face reddening.

"What other night?" I asked innocently. I knew she was talking about Saturday night, but seeing the flush creep across her cheeks spurred me on even more.

"Saturday night. You went out with the guys and when you got back, you texted me."

"I text you every night." I shrugged "You know we always chat before bed."

"You know what I'm talking about," she said as she wagged her finger at me.

"You offered to send me a picture of...of..." her eyes widened before she dropped them down towards my lap.

"My
cock
?" As I said the word, I imagined trumpets saluting in the background. She was almost too easy to tease at times. Seeing her face glow brightly, I smiled seeing the reaction I was looking for. "Of course I offered to send you a picture of my cock. That's what friends are for. You were getting so wrapped up with the budget and the fundraiser, I thought you needed a little distraction. Of course, in my case I mean a
big
distraction. And maybe then you'd relax a little."

I winked at her, and she launched her pen towards my head but missed.

"You're such a perv," she said, laughing.

"Me? No, I'm a realist." I pulled my cell phone out of my pocket. "Go ahead. Send me a picture of yourself and I'll show you how quickly I can relax." I closed my eyes and put my hand up in her direction. "Never mind, I can imagine it." I lowered my hands to my belt. "Want to watch?"