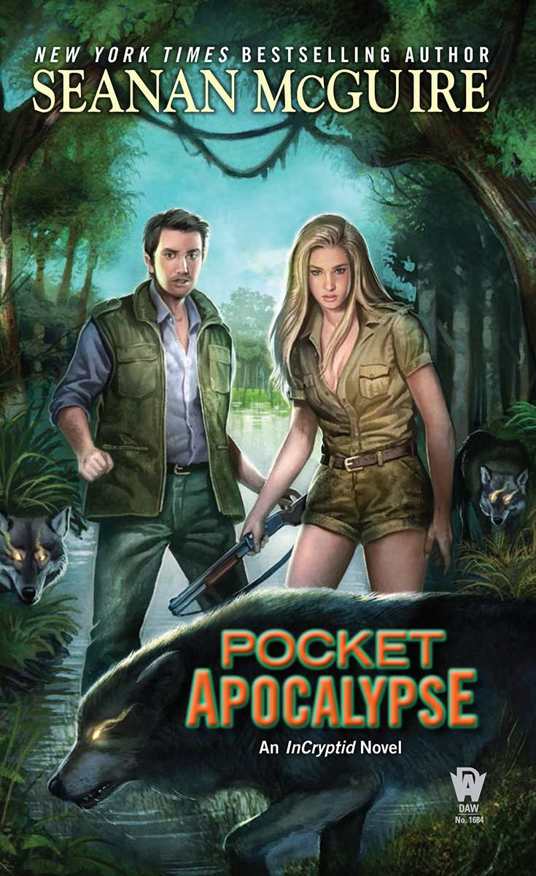 Praise for the
InCryptid
novels:

“The only thing more fun than an October Daye book is an InCryptid book. Swift narrative, charm, great world-building . . . all the McGuire trademarks.”

“[
Half-Off Ragnarok
is] slightly over-the-top fun, a genuinely entertaining good time, [and] an urban fantasy that, despite the title, isn’t about the imminent end of the world.”

“Seanan McGuire’s
Discount Armageddon
is an urban fantasy triple threat—smart and sexy and funny. The Aeslin mice alone are worth the price of the book, so consider a cast of truly original characters, a plot where weird never overwhelms logic, and some serious kickass world-building as a bonus.”

“It would seem that McGuire’s imagination is utterly boundless. The world of her InCryptid series is full of unexpected creatures, constant surprises and appealing characters, all crafted with the measured ease of a skilled professional, making the fantastic seem like a wonderful reality. The shifting focus of the series [in
Half-Off Ragnarok
] to a different member of the engaging and consistently surprising Price family is a resounding success, offering a new look at some well-loved characters and a new world of interesting beasts and mysteries to explore.”

“Exciting . . . McGuire creates a sense of wonder and playfulness with her love for mythology and folklore, weaving together numerous manifestations of a single theme. Her enthusiastic and fast-paced style makes this an entertaining page-turner.”

“While chock full of quality worldbuilding, realistic characters, and a double helping of sass, at its core,
Half-Off Ragnarok
is a book about judging others according to stereotypes, how nurture can overcome nature, and the importance of family.”

“
Discount Armageddon
is a quick-witted, sharp-edged look at what makes a monster monstrous, and at how closely our urban fantasy protagonists walk—or dance—that line. The pacing never lets up, and when the end comes, you’re left wanting more. I can’t wait for the next book!”

Any resemblance to persons living or dead is strictly coincidental.

If you purchase this book without a cover you should be aware that this book may have been stolen property and reported as “unsold and destroyed” to the publisher. In such case neither the author nor the publisher has received any payment for this “stripped book.”

The scanning, uploading and distribution of this book via the Internet or via any other means without the permission of the publisher is illegal, and punishable by law. Please purchase only authorized electronic editions, and do not participate in or encourage the electronic piracy of copyrighted materials. Your support of the author’s rights is appreciated.

Nearly all the designs and trade names in this book are registered trademarks. All that are still in commercial use are protected by United States and international trademark law.

Price Family Field Guide to the Cryptids of North America and Australia: Updated and Expanded Edition

For Amy Mebberson and Nikki Purvis.

Thanks for making my world a better place.

1. Threatened with extinction or immediate harm.

2. Home of some of the most unique and varied animal life known to mainstream science.

3. A good place to become endangered.

“Adversity doesn’t exist to make us stronger. Adversity exists because this world is a damn hard place to live. Prove that you’re better than the things it throws at you. Live.”

A
LEX EASED HIMSELF
AROUND
the open stable door, his heart beating so hard that it felt like it was going to break in two. The sweat dripping from his palms was making it hard to keep his hand positioned correctly on the grip of his pistol. Everything was silent. His parents and Aunt Jane were inside the house, looking for signs that could possibly lead them to the werewolf’s hiding place. Elsie was outside, watching the road to see if anyone else was inclined to come looking. The farm was isolated enough that the screams wouldn’t have carried very far—but they had carried far enough for one of the local Sasquatches to notice.

This was the area’s second werewolf outbreak in a little under a month. The first had been handled by amateur monster hunters who didn’t finish the job. When the werewolves came back, the locals got frightened for their own safety, and called in the closest thing they could find to professionals: the Prices.

Alex and Elsie wouldn’t even have been there if Uncle Mike had been available. Alex had turned nineteen two months before, making him officially old enough for dangerous field assignments. Elsie was still eighteen. The fact that she had been allowed to come along had been the cause of much shouting at home when Alex’s sixteen-year-old little sister, Verity, had learned that the rules weren’t going to bend far enough to let her join the party. As loud as she could yell, she should have been a singer, not a dancer.

As he inched farther into the dark barn, Alex found himself wishing their ages had been reversed. Verity wouldn’t have enjoyed the current situation any more than he did, he was sure, but at least she’d
wanted
to be there. He’d wanted to stay home with his books and his terrariums and keep studying for next week’s midterms. Even if most of his research was going to be done under false identities, he needed to have a real degree to have any credibility within the cryptozoological community.

And none of that was going to matter if he wound up as werewolf chow. He took a deep, shaky breath, forcing his hands to stop shaking, and swung around the corner into the main part of the stable.

There were still bloodstains on the walls from the first outbreak. Alex looked at them and swallowed hard. Lycanthropy-w was a relative of rabies. It was primarily blood borne, but it couldn’t spread through dry contact. He’d need to lick the walls to be in danger, and even then, the odds of infection were so low as to be nonexistent. He knew that, just like he knew that he’d been sent to search the stables because there was less of a chance he’d run into danger out here. He still gave the first of the stains a wide berth, and made a mental note to tell his father that they needed to put a call out for Aunt Mary. She could come and scan the ghost side of things to make sure the dead horses weren’t haunting the place.

Everyone had their own set of skills and talents to bring to the table. Alex just wasn’t sure that his included this particular kind of fieldwork.

Something rustled at the back of an open stall. Alex held his breath, counting to five as he listened. The sound didn’t repeat, and he inched forward, scanning all the while for movement. It was probably a raccoon, or a barn cat, or something else native to the farm. Why would a werewolf have come out to the stables when there was so much untouched meat strewn around the house? The family that had owned this farm was dead, all of them, their throats ripped out and their blood left to pool on the floor. Werewolves were territorial, and they didn’t like to be exposed. The creature had most likely made its den somewhere inside the house—an attic, a basement, an overlooked room.

Unless it considered the stable its territory. As Alex moved toward the open stall the creature, which had been huddled down in the straw, rose on strong, twisted legs that were somewhere between equine and lupine, yet still somehow managed to grant it a bipedal stance. Alex froze, feeling like his feet were suddenly locked to the floor. He couldn’t move. He couldn’t
move
.

The werewolf had no such restrictions. It stalked toward him, snapping and snarling at the air. Its mouth was a crowded jumble of herbivore and carnivore teeth, and its half-hoven claws were splayed as wide as its warping bone structure would allow.

The claws were what finally did it. Alex’s paralysis broke, and he turned and ran, heading for the rear of the stable as fast as his legs could carry him. He could hear the werewolf crashing along behind him, but as he had hoped, the creature’s twisted skeletal structure was slowing it down, preventing it from matching his speed. No human could outrun a horse over a short distance, or a wolf for that matter. This thing was a combination of the two, along with the unique bone structure granted to its interstitial form by the lycanthropy-w virus. It had to be a newish werewolf. If it had been more accustomed to its new reality, it would have changed forms and gone for him as either a wolf or a horse by now, not this horrifying combination of the two.

He was almost to cover. He dared a glance over his shoulder and saw the werewolf less than eight feet behind, froth dripping from its jaws, eyes red with burst capillaries. Adrenaline lanced through his veins, propelling him the rest of the way to the back wall, where he spun around, whipping himself behind a pile of hay bales, and opened fire.

His pistol was small: it held only six bullets, but all of them were silver-coated and treated with aconite. The werewolf screamed when the first one hit it. It wasn’t a sound Alex had ever heard before, and it wasn’t a sound he ever wanted to hear again. Like everything else about the creature, that scream was a hybridized horror, neither wolf nor horse, and somehow
wrong
in a way he couldn’t put into words. It made his blood run cold and his teeth ache, and so he kept firing, again and again, until the hammer clicked on an empty chamber and the werewolf was sprawled on the stable floor, no longer moving.

Its anatomy was so twisted that it was impossible to tell whether or not the thing was dead, and Alex had seen too many horror movies to risk walking over to check. That was the sort of decision that got people gutted or, worse, infected. He sank slowly to the floor, his useless weapon dangling from his fingers, and stared at the unmoving bulk of the creature. He knew that he should run, but he couldn’t get his legs to work. So he just sat there.

He was still sitting there, crying silently, when his family came running to investigate the gunshots. He didn’t know what else to do.

Spy and the Thief by Edward D. Hoch
The Garneau Block by Todd Babiak
Making the Cut by David Skuy
A Twist of Date by Susan Hatler
Architects Are Here by Michael Winter
Smolder by Mellie George
An Emperor for the Legion by Harry Turtledove
Elminster. La Forja de un Mago by Ed Greenwood
Sons of Wichita: How the Koch Brothers Became America's Most Powerful and Private Dynasty by Daniel Schulman
Her Hometown Hero by Margaret Daley