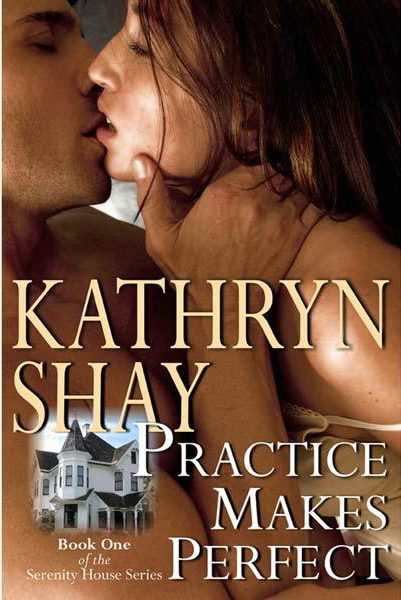 Discover other titles by Kathryn Shay

Nothing More To Lose

Someone To Believe In

A Price Worth Paying

A Place to Belong

Jade Kendrick Anderson - Paige’s sister, one of the original residents of Serenity House

Anabelle Crane - Police officer, one of the original residents of S.H.

Charly Smith Donovan - Social worker, one of the original residents of S.H.

Paige Kendrick - Pediatrician, one of the original residents of S.H.

Taylor Vaughn Morelli - One of the original S.H. residents

Darcy O’Malley - One of the original S.H. residents, now runs a day care

NORA NOLAN struggled to stay calm as she climbed the stairs of Serenity House, Hyde Point’s new home for troubled girls. Behind her were Sergeant Chief Dan Whitman and Jade Kendrick, one of the resident teenagers. They hurried to the first room on the left.

Paige, Jade’s sister, was sprawled across the bed, wearing oversize boxers and an oversize T-shirt to cover her huge stomach; she peered up from her book,
The First Nine Months of Life
. “What’s wrong?” She spotted her sister. “Jade? What’re you doing home in the middle of the day?” Her eyes narrowed. “Did you get in trouble again at school?”

Bursting into the room, Jade climbed onto the bed with Paige. “No, Dan came and got me.” She sidled in close. “Something’s wrong.”

Paige’s eyes widened; she slipped her hand into Jade’s and looked up at the adults. “What happened?”

“I need to talk to you both.” Nora tried to keep her tone even as she came into the room, followed by Dan. She inched Paige and Jade over and sat on the bed. “I just got a call from the state police. I’m so sorry, girls. There’s been an accident.” Her voice cracked, and Dan put a hand on her shoulder. “Your parents were on a motorcycle. They were killed instantly.”

For a minute everything seemed suspended in time. No one moved. Then tears welled in Jade’s eyes, and she turned her face into Paige’s shoulder. Paige shifted and encircled Jade with her arms. But her own eyes stayed dry. “It’s okay, sis, I’ll take care of you.” Swallowing back emotion, she looked at Nora. “H-how did it happen?”

“They crashed into a utility pole on the way here.” No need to tell them yet that Sam and Sari Kendrick, who had just been released from rehab, had visited their dealer and had been high as kites when they drove their motorcycle off the road.

“No, no,” Jade sobbed, almost hysterical. “They were coming to take us home this weekend.”

“I know they were.” Nora reached out to soothe Jade’s shoulder.

Paige’s hand went to her stomach. “What’ll we do now, Nora?”

“We’ll decide that later,” Nora said, tucking back a strand of Paige’s hair. “Sweetie, it’s all right to cry.”

Shaking her head, Paige lifted her chin. “No, I have to figure this out. We’re alone now. I’ll have to take care of Jade. I’ll have to...” Her face tightened, then blanched. “I, um, don’t feel good.”

Nora cocked her head. “The baby?”

“No. Just...a little sick to my stomach. I gotta go to the bathroom.” She tried to ease away from Jade.

Nora pried the younger girl loose. “Let go, Jade. She’ll be right back.” She wrapped Jade in her arms and Paige bolted off the bed and headed to the door. Just as she reached it, she stopped short. “Nora, Nora, my...I...” She looked down at the wet splotches on her boxers.

Nora drew in a breath. “Your water broke.”

“That means the baby’s
coming
.” Paige gripped the jamb. “It’s a month early.” Her face contorted and she hunched over. “Oh.”

Dan reached her first. “Easy now.” He grasped her shoulder, just before she crumpled. Swinging her up into his arms, he crossed to the bed and set her down. “Nora, call the ambulance.”

“Well,” Nora said with a calm she didn’t feel. “I have some medical training. And Dan’s an EMT, so if the medics don’t get here in time, you’re still in good hands.”

Paige’s grip on Nora’s arm intensified. She moaned as a contraction slammed into her. “Ohhh...”

“Breathe in, Paige. Like we learned in class. Let the air out slowly.”

The contraction crested, but another seemed to hit immediately. It was too soon for them to be coming so fast.

Dan returned. “The medics’ll be delayed. The only ambulance is on another call.” Nora tried to hide her concern. Serenity House was located on the outskirts of town; under the best of circumstances, it took at least fifteen minutes to drive out here.

Another contraction. When it finally subsided, Paige whimpered, “I want my mother.”

“Nora,” Dan said, “get some towels and sterilize a pair of scissors.” His voice was confident, cutting through Nora’s panic. “It won’t be long.”

Nora did as Dan asked. By the time she returned, Paige was soaked in sweat and breathing hard. Dan and Jade were at her side. Nora took Dan’s place on the bed, and he went to wash up.

“Mom said I could keep the baby. That they’d help. They can’t now, right?”

“I don’t want it.” She lifted her shoulders off the bed, and tightened her hold on Nora’s hand. “Promise me, you’ll take it right away. I don’t even wanna know what it is.”

“Sweetie, now’s not the time—”

“All right, I promise. I’ll take it away until you have time to think about it.”

Dan returned, and forty-five minutes later, Nora watched as the tiny infant slipped into his hands. Sirens blared in the background. Paige turned her face to the wall. “Take it away,” was all she said.

Nora’s throat clogged and her eyes blurred, but she wrapped the baby in a blanket and stood holding it by the bed.

“Take it away!”
Paige screamed.

Slowly, cradling the newborn to her chest, Nora turned and walked out the door.

PAIGE FLOATED facedown on a raft in the kidney-shaped pool on the Princess Cruise Liner docked just off the coast of Jamaica. The tropical sun warmed her back and almost lulled her to sleep. Suddenly, incongruously, a ringing pierced the air—a bell of some kind. She moaned and tried to block out the noise, but it persisted. Damned if it didn’t sound like a phone...

“Arrgh...” Paige buried her face in her pillow. Blindly she reached out her arm, fumbling for the intrusive instrument. “Hello.”

“Yes, this is Dr. Kendrick.” She kept her eyes shut, hoping the call would take only a few minutes and she could go back to Jamaica.

“Just a moment, please. Dr. Chandler would like to speak to you.” Muffled sounds. The woman giggled as she spoke away from the receiver.

A deep, morning-after voice came over the phone. “Hi, Paige.”

“This better be good, Ian.”

A throaty chuckle. “Hmm. Last time a woman said that to me...” The man was a notorious flirt. She remembered that now.

“Cut it out.” Her words were slurred by the pillow.

“Sorry to wake you, Sleeping Beauty. I wouldn’t have called, but one of your fan club just delivered, and she said
you
said she could call any time—”

“Little Alyssa Paige is fine. But she has a hemangioma on her left cheek, and Kari won’t believe me when I tell her it’s just a vascular birthmark and will go away. She wants you.”

Sliding out of bed, Paige crossed to her closet. “I’ll be right there.”

“Just talk to Kari on the phone,” Ian told her. “It’s early. You can catch some more sleep.”

“Ian? Did the delivery go smoothly?”

“The second one is usually easier.”

Again a sensual chuckle on the other end. God, did he take sexy pills? “See you soon.”

She pulled on navy pants, a white blouse and a light sweater, stuck her feet into a pair of Birkenstocks, and was out the door of her twelve-room house on Spencer Hill and into her silver BMW in less than five minutes. She reached the sprawling Hyde Point General Hospital in record time and arrived at the Birthing Center a mere twenty minutes after being snatched from her Caribbean cruise.

Ian met her outside one of the birthing rooms. Despite the early hour, he managed to look irritatingly handsome in green scrubs, with his long hair the color of mink framing a face that turned grown women into simpering idiots. “What did you do, fly?” he asked.

“Wish I could. It would save time.”

He nodded to the first door. “Sorry about this, but it’s your own fault. All the mothers of your little patients think you’re
their
mother.”

Mother
. She ignored the twinge, though it was hard when she remembered today’s date. And hard, too, because Kari, like Paige, had been a resident of Serenity House when her first child—a son—had been born. Which was why, at Nora Nolan’s request, Paige had agreed to be the Linstrom children’s pediatrician. She said to Ian, “Your patients think you’re Dr. Kildare, so we’re even.”

“Who’s he?” Ian called out to her retreating back; she brushed past him and into the first room without answering.

Kari Linstrom sat on a bed with yellow-covered pillows and sheets, cradling her child. Paige dropped her purse on a table. “Hi, Kari. So she came early?”

The girl’s face glowed, though it was etched with exhaustion—and something else. “Yes.” Her voice quavered. “Dr. Paige Kendrick meet Alyssa Paige Linstrom.”

Paige smiled warmly at her. “I’m honored.” She crossed to the sink. “Let me wash up.” Scrubbing, she asked, “Everything go okay?”

“But she’s worth it.” Kari was looking down at the child when Paige approached the bed. Bending over, Paige moved the blanket away from the infant’s face. Sprouts of red hair, the exact shade of Kari’s, peeked out from under the gauzy pink cap. Little fingers flexed, and Paige stuck her own pinky into the baby’s hand. Alyssa grasped it and Paige chuckled. “Well, hello there, little one. Welcome to the world.”

Though the baby’s skin was typical newborn red, a tiny purplish blotch did indeed mar her cheek. “It looks like a fairy’s handprint,” she said, recalling the description in Nathaniel Hawthorne’s story “The Birthmark”. “But Dr. Chandler was right. It’s a hemangioma, also known as a strawberry mark.”

Tears clouded Kari’s eyes. “She has it because I’m not married.”

“My father said God would curse the baby because I’m not married. Just like Jimmy’s feet.” Kari’s son had been born with club feet and had gone through painful surgery and a full year of casting to correct the deformity.

The young mother began to cry in earnest. Paige sat down on the bed and pulled Kari and the baby into her arms. “Shh, Kari. It’s all right. God hasn’t cursed your baby.”