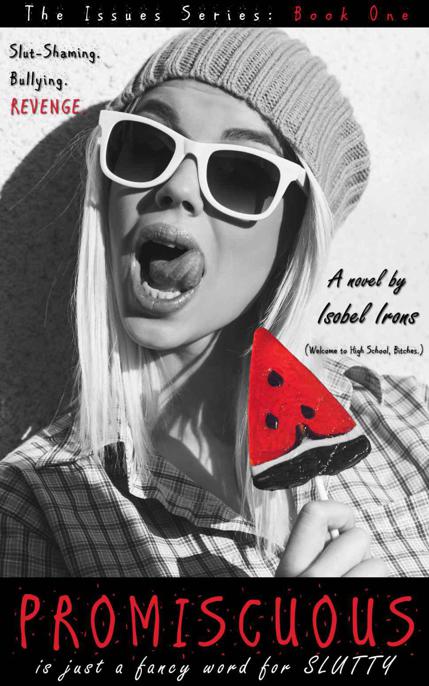 “The world breaks everyone and afterward many are strong at the broken places.”

Ernest Hemingway,
A Farewell to Arms

Some of you are likely reading this and going, “What an idiot, does this author really not know that it’s supposed to say ‘foreword’—as in, the thing that comes
before
the words—and not ‘forward’?”

But if I’m an idiot, it’s not for that reason. Actually, I’m pretty sure someone at some point will call me an idiot just for writing this book. Which is why I’m taking this opportunity to forewarn you in such an incredibly shocking and—wait for it—
forward
manner, that you’re about to embark on a dark, twisting journey which—like real life—doesn’t necessarily have a happy ending.

PROMISCUOUS is a modern day Cinderella story. But it is
not
a fairy tale.

In fact, in the interest of saving time, let’s just get something out of the way. In this story, the F-word is used approximately 144 times, alongside a whole slew of other “bad” words. Some people may find this crass or gratuitous, and assume it’s meant for shock value, or to make this book seem more “edgy.”

To all the people I will undoubtedly offend with this book, I would like to apologize in advance.

Honestly, I tried to tell Natasha (the hero of this story) to clean up her act. But she gave me the finger and said that there was only one way this story was going to be told: her way.

While I’m at it, I should also probably confess that I think this story deserves a better ending. Hell, I
know
it deserves a better author. But it gets me, and I (the author) decided to take a chance on making a few people a little bit angry.

Because, for better or for worse, this isn’t just the story of Natasha “Tash” Bohner, an 18-year-old girl from a nameless town in an undisclosed state who swears like a trucker and wears red sneakers covered in labels.

It’s your best friend’s story, your sister’s story, and your college roommate’s story.

This broke-ass, unintentionally offensive Cinderella story belongs to every one of the more than
one in five
women who walk around every day feeling broken, or dirty, or somehow worth less than other girls, because someone hurt them the way Tash was hurt. The way I was hurt. The way my mother was hurt. (In other words, this shit has been going on for far too many generations.)

Yes, Tash is
fictional
. Tash’s friends and family members are fictional, too. But there’s a piece of her in every person who will read this story and say to herself or himself, “this
could
be about me.”

To those of you who are brave enough to make it to the end of this story, I hope you can see through the anger to the hurt that lies beneath—not just in these words I’ve written, but in your friends and family as well.

Everyone deals with pain differently, and as Sigmund Freud once said, “We are never so defenseless against suffering as when we love.” I’m not going to lie to you. Telling the truth is scary, and it’s painful as hell. And sometimes, the people you love kind of fuck up the way they react to it. But as much as it can suck, telling the truth will
never
be half as painful, or half as damaging as keeping it hidden inside you.

So, please. If you don’t read another word past this point, if you throw this book down and never look at it again, please take from this story one message:

You have
every right
to be angry. You have every right to cry, or break things, or swear a whole lot. But once you’ve done that,
please
let go of your shame. Tell someone you trust, and let them help you work through the pain. And most importantly, don’t you
ever
shame yourself, or let anyone else shame you again, for the hellish experience you didn’t ask for, but bravely survived.

Be the hero of your story. Don’t let them make you feel like a cautionary tale. Live your life
forward
.

My name is Natasha, and I'm a gigantic slut.

So what if none of that shit is true?

That doesn't make me any less of a slut. They'll probably tell you that, too.

But there's one thing they won't tell you, and that's my side of the story.

(By the way, if you're one of those easily offended types, I'm telling you right now, you'd better strap yourself the fuck in. Maybe buy a crash helmet while you're at it. I'm just saying.
Consider yourself warned
.)

I was born in a trailer park called Bigland Estates. How's that for irony, right?

My dad drove big rigs for a living, and since he was one of the sole men in the neighborhood who hadn't knocked up his wife and then split, or stayed and drank away the family living, I guess that sort of made my mom the honorary First Lady of the place. At least, she liked to think so.

When I was in kindergarten, mom got a job as a secretary during the day. We're talking big money here, like five, maybe even six bucks an hour.

Her name was Gretchen Cader. You remember that name, okay? I'm not just saying that for dramatic effect, either.
Fucking remember it
. I'll get back to her later.

Anyway, there's a kind of community in trailer parks. More like that of a prison than like an actual neighborhood, though. I think you can probably chalk it up to a shared awareness of what happens when you make a series of really shitty life decisions.

Or proximity, I guess. Maybe both. Whatever.

At any rate, there was always kind of an unspoken rule in BE—and if you were paying attention, you'd remember that was the name of my trailer park, Bigland Estates. Hence, BE—and really all trailer parks, when you get right down to it.

This rule is very similar to the number one rule in prison: if you know what's good for you, you'll mind your own goddamn business.

Sounds simple, doesn't it? Well let's add a caveat, shall we?

I know what you're thinking. ‘How the hell does this broke ass piece of trailer trash know words like caveat,’ right? Well guess what? I've read every single book on the
New York Times
list of “Top 100 Literary Classics,” not to mention every Jane Austen, Sylvia Plath or Bronte sisters’ book ever written. And fuck you very much for judging me, by the way.

Shit, where was I? Oh, right. Rule #1: Minding your own goddamn business.

But here's the caveat to this very simple sounding rule. (And just in case you’re even half as stupid as I think you are, a caveat is defined as a warning or proviso of specific stipulations, conditions, or limitations.) In a trailer park, whether it be the very ridiculously named Bigland Estates or any other, there is no
such thing
as a secret. Everybody knows everybody's motherfucking business.

That guy in 33D who's been screwing his wife's sister? Yeah, we know about that.

The lady in 21F with the plastic flamingos on her rock lawn? Piles of debt. We're talking upwards of thirty thousand owing to The Man, in credit cards alone. She's got a shopping addiction the likes of which TLC—or whatever the fuck channel you upper middle class people like to watch trashy reality shows on—has never seen. Thing is, she doesn't keep any of it. Sends it all to her daughter in New Jersey. The one she hasn't spoken to in thirty years.

How do we know all this shit, you might ask, if she never has the stuff sent to her house? If she hasn't spoken to said estranged daughter since the girl was old enough to drive her legally adult ass out of BE for good? See: above. Re: Trailer Park Fun facts.

There are no. Fucking. Secrets.

I'm not telling you this to educate you. Although, there is a small part of me that hopes you do learn an important lesson from this story. But how to survive in a trailer park isn't it. Because, really. The chances of your pampered middle class self needing to apply these rules at any point? I'm thinking slim.

Unless by some hilarious twist of fate, instead of going to heaven or hell, you die one day and wake up the next in the life of someone you judged wrongly. And you're forced to live it, the same way they had to.

Damn, that would be awesome.

Then again, I hate to think about what that would mean, if I was right. What if I ended up where I am because in some past life, I treated someone else this way? Shit, I really don't think I could live with that.

Either way, though, I'm pretty sure that you're going to get what's coming to you, one way or another. If there's one thing all this shit has taught me, it's that. Sooner or later, everyone gets what's theirs.

But don't you feel sorry for me. I mean it. Cut that bleeding heart, holier-than-thou bullshit out, right now. You're the reason the world is such a shitty place for people like me to live in. I don't want your pity. I want your awareness. I want you to steep in it, soak it in. Wallow in the knowledge of your part in this situation. And maybe, if you live with it long enough, it will change you. Maybe it will make you better.

But I seriously doubt it.

You see, you might know fuck-all about me, but I’ve got your little subset pegged. At this point in my story, I can imagine you're starting to feel a little bit uncomfortable. You're squirming in your seat, wishing you could flip through the pages to see if there's a light at the end of this tunnel. ‘Is it going to be this angry and depressing all the way through, or does she eventually reach a point of societal and literary Zen?’ And ‘My goodness, this young lady does utilize the F-word to an alarming degree!’