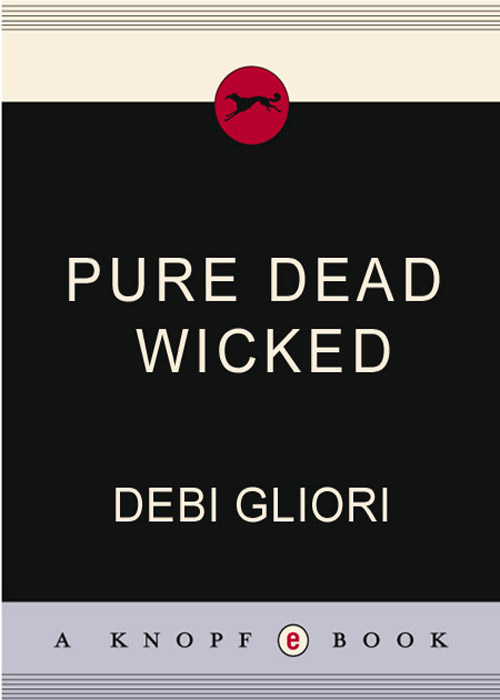 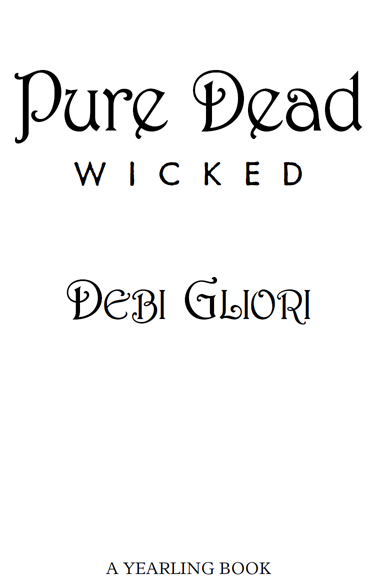 Beasts in the Bedchamber

Compliments to the Chef

Bad News All Round

Clones on the Rampage

The Unspeakable Pursue the Inedible

For Michael and Alex, who not only endured countless visits to StregaSchloss but also lit the candles and kept the fires burning. I owe you big.

There are few, if any, maps on which the amateur orienteer mightdiscover the coordinates for the village of Auchenlochtermuchty. This is because the indigenous population wish to avoid being overrun with tartan-liveried tour buses, tartan-tat tourist shops, and, in truth, tartan anything. The author respects the local population's desire to keep Auchenlochtermuchty's locus secret, and begs the reader to respect their wishes in maintaining it thus.

THE GOOD HELP THAT WAS HARD TO FIND

All resemblance to persons living or dead is unintentional, but the author wishes to acknowledge a growing similarity between herself and Tarantella and also to give thanks for the generosity of the International Institute for Advanced Witchcraft for permission to reprint one of their examination papers on the next page. 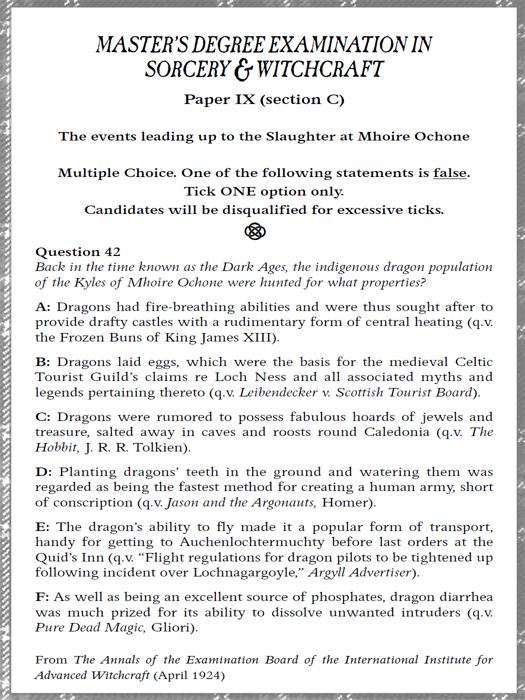 M
uch later, Titus was to remark that this must have been the only time in history when a dirty diaper could be said to have saved several lives.

On that memorable morning, unaware of the terrible danger that hung over their heads, the Strega-Borgia family had been attempting to squash themselves into the interior of their long-suffering family car. Their shopping trip to the nearby village of Auchenlochtermuchty was long overdue, and consequently, all members of the family of two adults and three children were vociferous in their demands that they should not be left behind at home. Titus needed a computer magazine, Pandora had to buy something to eradicate a minuscule crop of pimples that had erupted on her chin, their baby sister, Damp, required more diapers, and their parents, Signor and Signora Strega-Borgia, had to go to the bank and do boring adult stuff.

As was usual with any planned expedition between StregaSchloss and Auchenlochtermuchty, the process of leaving the house was taking longer than anticipated. Boots and coats had to be retrieved from the cloakroom, Damp had to be supplied with a clean diaper and given a ration of crackers to stave off starvation, and Titus needed to render himself deaf to everything going on around him by the simple expedient of clamping a pair of headphones round his head and pressing the
PLAY
button on his Walkman.

Titus threw himself into the car seat next to Damp, turned up the volume, and settled back with a smile. From outside the car, where she stood with her parents as they went through the ritual of finding checkbooks and car keys, Pandora noted with some satisfaction that Titus's expression was changing rapidly to one of disgust.

“PHWOARRR!” he bawled, competing with the deafening sounds inside his headphones. “DAMP! THAT'S DIS
GUS
TING!”

He struggled with his seat belt, desperate to put as much distance as possible between himself and Damp's odious diaper. Signor Strega-Borgia groaned, unbuckling his baby daughter and plucking her out of her car seat. Just at the precise moment that both Damp and Titus exited the car, the unthinkable happened.

A trio of vast and ancient roof slates that had clung to the topmost turret of StregaSchloss for six hundred years, held in place by little more than a clump of moss, broke free of their moorings and began their downward descent. Gathering momentum by the second, they barreled down the steep incline of the roof.

It all happened so quickly that initially the family were convinced that, for reasons unknown, an invisible bomber had dropped its payload directly onto their car. One minute they were standing around the unfortunate vehicle, happily slandering Damp's diaper, the next they were lying groaning on the rose-quartz drive, wondering what had hit them.

“What on earth?” Signor Strega-Borgia picked himself and Damp off the ground and ran to Signora Strega-Borgia to check that she was unharmed.

“Titus? Pan? Are you all right? Whatever happened?” Signora Strega-Borgia rubbed dirt off her clothes and stared at the car in disbelief.

“WHAT A WRECK!” yelled Titus, still muffled in his headphones. “LOOK AT IT! IT'S TOTALLY TRASHâ
OWW!
”

“There,” said Pandora with satisfaction. “That should help.”

“Did you
have
to do that?” moaned Titus, holding his ears and glaring at his sister. His headphones dangled from Pandora's hands.

Signor Strega-Borgia was walking slowly round the wreckage of his car, surveying it from various angles, simultaneously horrified at the damage and amazed at the family's lucky escape. Embedded in the roof of the car, at a forty-five-degree angle to the battered paintwork, were three huge slabs of slate.

“We could all have been killed,” said Signor Strega-Borgia reproachfully. He squinted up at the turreted roof of StregaSchloss, attempting to locate the origin of this attempt on his life. Beside him, Signora Strega-Borgia sighed. This was proving to be the most expensive morning's shopping thus far. To their list of items to be purchased in Auchenlochtermuchty, they now had to add one roof and one family car.

“We'll have to get it fixed,” decided Signor Strega-Borgia. “The whole roof looks like it's in danger of raining down on top of our heads.”

The family automatically took several hasty steps backward, away from the danger zone. Titus tripped over a low stone wall and fell backward into a herbaceous border with a dismayed howl. Ignoring her son completely, Signora Strega-Borgia addressed her husband. “But that will cost a
fortune,
Luciano. Look, before we call in the experts, why don't you let me see if I can mend it. I'm sure there was something I learnt at college that would do the trick.”

“Darling, I hardly think that your diploma in Primary Magic is a sufficient qualifâ” He halted abruptly, alerted by the glacial expression crossing his wife's face.

Throwing her black pashmina dramatically across her shoulders, Signora Strega-Borgia stalked away from her husband across the rose quartz until she stood at the head of the steps leading down to the old croquet lawn. “I know you think I'm a half-baked witch, incapable, incompetent”âshe choked back a sobâ“inconsequential.”

The front door opened and Mrs. Flora McLachlan, nanny to Titus, Pandora, and Damp, emerged into the December chill, shivering as she surveyed the family and their ex-car. “Now, dear,” she admonished, gazing fondly at Signora Strega-Borgia, “there's no need to be like that. We all know that you're a very fine witch, indeed. . . .”

“Do we?” muttered Pandora.

“I don't
think
so,” whispered Titus, crawling out of the herbaceous border and coming to stand next to his sister. Beside them, Signor Strega-Borgia sighed. If only Baci wasn't so
prickly
. He hadn't meant to insult her. Not really. Just perhaps to remind her that six months into a seven-year degree course in Advanced Magic might mean that her skills weren't exactly up to speedâyet.

“I'll prove you wrong,” Signora Strega-Borgia promised, thrusting her arms wide apart and throwing back her head. Unfortunately this had the effect of making her look like a demented bat, and Titus had to avert his gaze to avoid bursting out laughing.

“My dear,” said Mrs. McLachlan in alarm, “remember, if you would, that anger can cloud your judgment. Now let's not be too hasty. . . .” The nanny started down the steps toward her employer, but it was too late. Signora Strega-Borgia had already produced a small Disposawand from her handbag and was waving it erratically in front of her face.

There was a flash, a small apologetic puff of pink smoke, and the air was filled with the inappropriate smell of antiseptic cream.

“Oh, for heaven's sake, Baci. Just
don't
attempt to fix the car.” Signor Strega-Borgia strode across the drive with Damp under one arm, stamped up the stairs into the house, and, seconds later, they all heard the sound of the bathroom door slamming shut.

Mrs. McLachlan, her mouth twitching with suppressed laughter, came over to where Signora Strega-Borgia stood hunched under her shawl, shoulders shaking, little sobs escaping from between her fingers.

“Och, pet,” the nanny soothed, “it's not the end of the world. There's rain forecast for this afternoon, and that'll wash it off, and then we can call in a firm to mend the roof in a more . . . um . . . traditional fashion.”

Signora Strega-Borgia peered out from between her fingers. “Oh, Flora,” she wailed, “I'm useless. I mean, look at it. Look at what I've done.”

At this moment, the sun chose to slide out from behind the clouds and spotlight the vast Band-Aid stuck to the topmost turret of StregaSchloss. The vision of eight hundred and sixty square feet of pink perforated plastic set against the gray slates of the roof was a little disquieting. With a wail, Signora Strega-Borgia ran for the house, her black shawl flapping behind in her wake.

“Oh, poor Mum,” said Titus, horribly embarrassed by the sight of female tears. “I'd better go and see if I can cheer her up.” He ran after his mother, leaving Pandora and Mrs. McLachlan gazing up at the bandaged roof.

“Can't
you
fix it?” said Pandora. “You know, with your amazing magic makeup case thing?”

The nanny immediately put her finger to her lips and made a shushing sound.

Pandora frowned and persisted. “Remember? Last summer? You had that . . . that sort of transformer that changed . . .” She faltered. Mrs. McLachlan's expression was not even remotely encouraging. Moreover, the nanny's eyes had stopped twinkling. Pandora shivered. Suddenly she felt chilled to the bone.

“Heavens, is that the time?” Mrs. McLachlan gazed at her watch. “My fudge cake will be ready to come out of the oven in one minute. And you, young ladyânot only are you appallingly inquisitive, you're also freezing cold. Come, child, inside with you.” Taking Pandora's arm, she propelled her in the direction of the house. On the doorstep she paused and placed a gentle finger on Pandora's lips. “One: I can't fix the roof. Two: I don't have the makeup case anymore. Three: I swapped it for something better, and . . .”

“If I promise to tell you more when the time is right, would you please forget that we ever had this conversation?”

“No buts,” said Mrs. McLachlan in such a way as to indicate that not only was the subject closed, it was bolted, padlocked, and, in all probability, nailed shut.

With a thwarted snort, Pandora followed Mrs. McLachlan inside.

Down & Dirty by Jake Tapper
Bridge to Cutter Gap / Silent Superstitions / The Angry Intruder by Catherine Marshall
Becoming Ellen by Shari Shattuck
A Fatal Fleece by Sally Goldenbaum
Uncontrollable (The Nature of Grace, Book 2) by Johannes, S.R.
Here Be Dragons: A Short Story by Sharon Bolton
Out at Home by Paul, JL
Tietam Brown by Mick Foley
Teleporter (a Hyllis family story #2) by Dahners, Laurence
Payback by T. S. Worthington