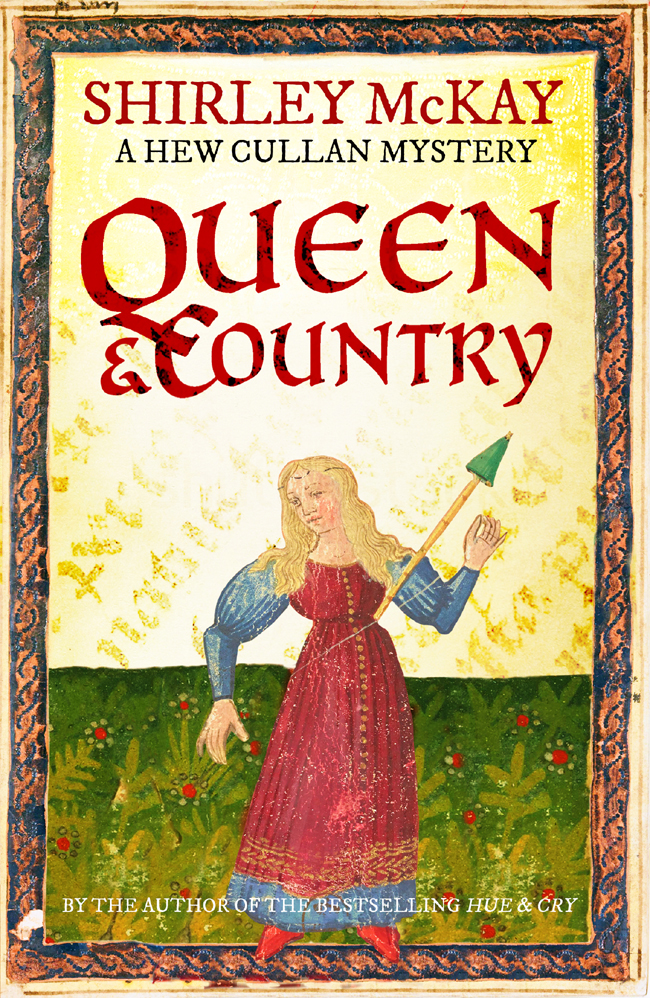 Other titles in the Hew Cullan Mystery series 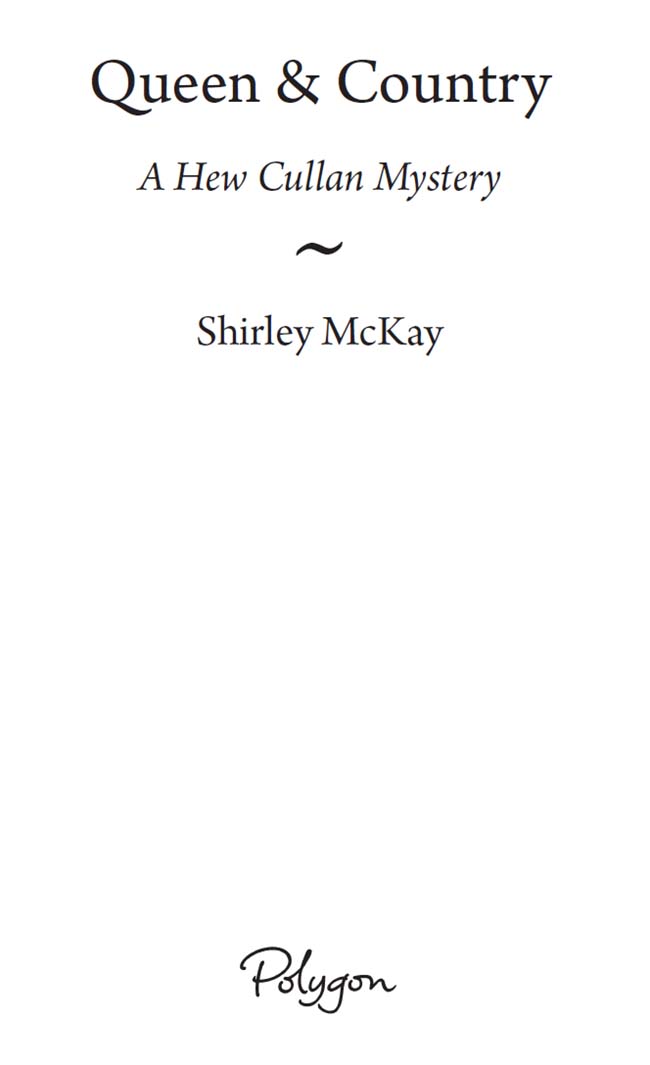 This edition published in Great Britain in 2015 by

Polygon, an imprint of Birlinn Ltd

The right of Shirley McKay to be identified as the author of this work has been asserted by her in accordance with the Copyright, Designs and Patents Act, 1988.

All rights reserved. No part of this publication may be reproduced, stored, or transmitted in any form, or by any means electronic, mechanical or photocopying, recording or otherwise, without the express written permission of the publisher.

British Library Cataloguing-in-Publication Data
A catalogue record for this book is available on request from the British Library.

The publisher acknowledges investment from Creative Scotland towards the publication of this volume.

Chapter 5: The Lion and the Hare

Chapter 7: A Dead Man in Delft

Chapter 11: An Efficient Cause

Chapter 20: The Doctrine of Signatures

The pedlar came to Scotland once or twice a year: in springtime when the leaves were opening in their buds, and sometimes when they fell, before the way was bared and bound in winter frost. In the year of the plague â a bad year that was â he did not come at all. In the course of a good year he crossed from his home in the midlands of England its length and its breadth, and then up north and down again. He brought his haberdashery to manor, fair and farm. He was welcomed in the houses landward of the towns, for his toys and baubles and his scraps of news, where news was slow to reach. In the burgh markets, he was made less welcome, and those he came to only for the annual fairs, when he would pitch his stall, and voice, among the rest.

This year, it was not until September that he crossed the Scottish border, to return to his old ground on the well-worn cadgers' paths. Here, he was assured to find a rousing cheer, comfort, meat and drink. He knew that his customers, after months of plague, would be glad to see him. The pack upon his back was as heavy as himself, lumbered with delights, when he first set off.

And yet, and yet, he did not find a welcome there, but a shifting silence that he could not comprehend. Wherever he went he was met with mistrust. Coming to each town, where he was turned out, he expected the good wives to follow him in droves and cry to see his wares; that did not happen now. And when he wandered landward to the little cots, expecting warmth and cheer, he found their doors were closed to him. In vain, he waved his paper proving
he was hale, and free from pestilence. He could not understand it. Starved as they had been, had their hopes and wants withered in the plague?

For once, he was behindhand with the news. The news had swept before him, like a line of fire that shrivelled to a husk all in its path, so that his trudge was through desolate landscapes, all solace closed to him. The news had gone before, closing every port, and darkening every brow that once had offered friendship. And no one thought to tell the pedlar what it was.

He came at last, at the end of November, to the South Street of St Andrews, for the last of the fairs before winter came, St Andrew's Day itself. The people here he knew would be flocking to its stalls,
flocking
for the first time in a full year since the plague, looking to stock up not simply on commodities, but on a mirth and lightness now in short supply. And if the crowds were depleted, and a little more subdued, than the last time he was here, the pedlar's spirits still were high that he would find a market for his buttons and his beads, his crudely painted soldiers and babies wrought of lead, his rattles and his pins. There were people enough, craftsmen and labourers mellow in drink, students and schoolboys truant from schools, good wives and masters in holiday clothes. There were scholars also, from the university, who wanted books and paper, sealing wax and ink. The pedlar would have liked to purchase those things too, to carry back down south, but until he offloaded the goods he had brought, he had no hope of that. The merchants had forestalled, picking off the cream that came from overseas before it left the ships. He saw the town apothecary, filling up a sack with spice and painters' colours, long before the man who brought them from the Orient had opened up his stall.

Yet he was not deterred, for in a restless horde, that hankered after novelty, there was room for all; and if he could not hope to have a prime spot for his stand, he had the advantage that he could slip among the crowd, nimble as a pick-purse, to ply his stock-in-trade.

The town drummer and piper had set up their roll, and the
swelling of a crowd, with ale in their bellies and money in their pockets, encouraged the pedlar to stake out his claim in a little corner not far from the kirk. He opened up his pack and began to cry his wares, with a perennial favourite. âCoventry. Coventry thread. Ye will not find a finer, nor a purer blue. For your caps and your cuff work. Your linens your embroideries. Will not run. Will not stain. No blue more true. No counterfeit stuff. Finer than gold. Mistresses, come buy. None is more true blue than Coventry blue.'

He was gratified to find that he had drawn an audience. Not, it was true, so many of the good wives who made up his target group, but several likely lads around the age of twenty, who had sweethearts, doubtless, targets of their own. âTrue blue,' he appealed to them, âto win a leman's love.'

One of the young men stepped forward. âWell met, billie boy,' he said. âCoventry, ye say? What kind a place is that?' The pedlar could smell the sour ale on his breath.

âA fine place, my master, where is spun the finest thread.'

âAye? Is that a fact? In England, is that place?' the young man answered, pleasantly.

âWhy, yes sir. At its heart. The very life and heartbeat of that brave green land.'

âFrom Warwickshire, sirs. From a place that is not far from it. And I can vouch, upon my life, that you will not find a blue thread of a finer quality.'

The young man grinned at that, turning to his friends.
âUr-pon his loife
, he says.'

The pedlar, appealing, held out his thread. âTrue blue,' he tried again. âThe ladies like it, sirs. An ever welcome gift, and the lady will be yours. I have ribands, too.'

âDid I hear that right?' the young man asked his friends. He was not smiling now, but a keen glint in his eye sent a signal to the pedlar something might be wrong. He took a small step back.

âDid that rusty bully call my lass a whore?'

âNo, as I assure you, sir,' the pedlar stammered now. âI did not say that.'

âI doubt he did he say that. I heard him quite distinctly, Tam,' came back the young man's friend.

âI heard the limmar too.'

But what was meant, or not, was stopped by the flowering of a fist, that burst out into blossom in the pedlar's mouth.

Above the outer entrance to the St Andrews tolbuith a single glove was pinned. This signified the session of the Court of Dustifute â the pie-powder court, which ruled upon transgressions at the fair, the common law suspended for the day. Convened to that court were the stewards and the bailies appointed to the task, who took their role there seriously. They were chosen from the burgesses and merchants in the town, and chief among them, who spoke now, was a leading beacon in the baxters' gild.

âYe are charged wi' disturbing the peace of the fair. What do you say?'

The pedlar peered through an eye that was bulbous and closed. His face had swollen up, to a shiny sullen purple, tight as a plum. His answer was muffled by the swelling of a lip, blubber to the touch of his shy protruding tongue. He swallowed on a tooth, a gobbet of slick blood, his answer indistinct.

âHe says, it was not he that started the affray. That he was set upon.' The pedlar had a man to speak for him. It was only right and proper that a stranger at the fair should have a countryman of his own to take his part; that was the point of a dustifute court, that none should find himself thrown upon the mercy of a foreign law, without a friend to speak for him. The friend was hard to find. At last, they had pressed into the service a cadger from the south, who had been quick to point out he had not witnessed the assault. He had come reluctantly to support his countryman. Was that not like the English, after all, the baxter sniffed. Cowards, every one.

âHe says that he was set upon. Well then, was he robbed?'

The pedlar had not been robbed. He had still, and plain for all to see, his same pack full of its cheap tricks and toys, his ribands and his laces and his true blue thread. His purse kept the pittance it held when he came with it.

âThis court concludes,' the baxter said, âthat ye are guilty of affray, and of disturbing the peace of the fair, and of slander and provokement of a guid man of this place, in that that ye cried his lass a whore, and assaulted him, when he tuik offence at it.'

âHe says,' his friend reported, âthat was not how it was, at all.'

âAye, but ye see,' the baxter leaned across the desk, and looked earnestly into the pedlar's eye, the one good remaining one, yellow and red, âthere are fifteen witnesses that swear that it was so, besides those lusty fellows in the vault below; and ye, as I believe, have not one witness that will swear the contrary. Wherefore, you must see, the case is found and proved.'

Heart of the Night by Barbara Delinsky
Mammoth Boy by John Hart
The Trojan War by Barry Strauss
Convoy 19: A Zombie Novel by Mark Rivett
España, perdiste by Hernán Casciari
Romance: Rockstar Romance: Rock My World (A Bad Boy Rock Star and a College Girl Romance) (Contemporary New Adult Second Chance Romance) by Kelly Clark
What Dies in Summer by Tom Wright
The Special One: The Dark Side of Jose Mourinho by Torres, Diego
A Spring Sentiment: A Pride and Prejudice Novella Variation (Seasons of Serendipity Book 2) by Elizabeth Ann West
I Don't Want To Kill You by Dan Wells