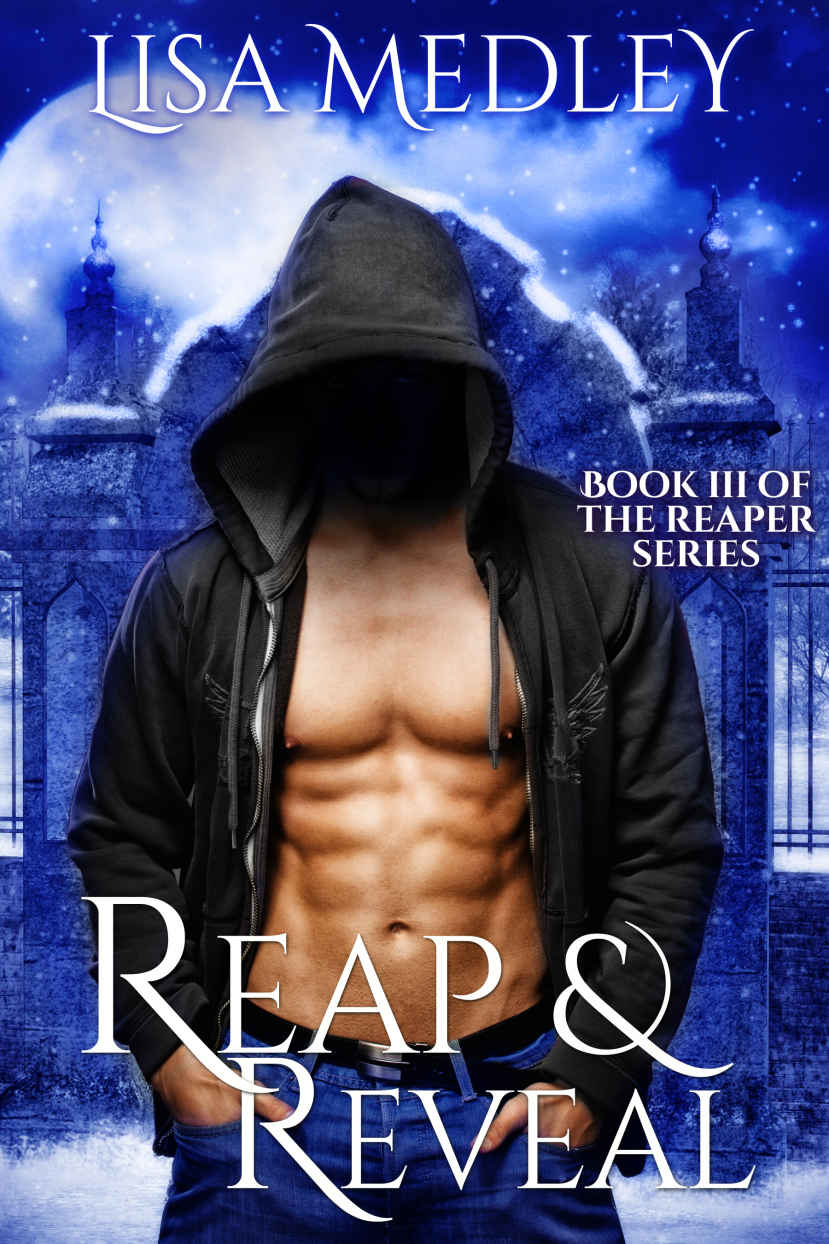 All rights reserved. This copy is intended for the original purchaser of this e-book ONLY. No part of this e-book may be reproduced, scanned, or distributed in any printed or electronic form without prior written permission from the author. Please do not participate in or encourage piracy of copyrighted materials in violation of the author's rights. Purchase only authorized editions.

By day he saves lives in the city he loves. Can he save souls too?

Nate is an EMT, a witch and a newly inducted member of the Reaper Authority Force. What he’s not is a reaper. With unexplained abilities, his true nature lies somewhere in between the angels, demons and reapers he finds himself involved with. When he’s paired with the reaper Maeve, he struggles to find his place in the rising war to save the souls of Meridian and the world.

Maeve has tried to hide her reaper handicap–her toxic reaper energy–from her colleagues. But when she’s possessed by a fallen angel and forced to poach souls for Hell, her greatest weakness might be the only thing that saves her.

Nate uses his growing powers and his innate magic to find Maeve. He’ll do whatever it takes to save her, revealing more than he ever imagined in the process.

To all of the great members, past and present, of Ozarks Romance Authors. Thanks for helping me show the world that monsters need love too.

Nate Blackburn whistled for his hellhound, anxious to flash home after a less than fruitful night of demon hunting with the Authority. Of course, his quarry was an angel. The fallen kind.

Bocephus came bounding down the alley, drool dripping in stringy ropes from his floppy jowls. The great black beast heeled and sat at his side, resting his basketball-sized head on Nate’s shoulder. Another long night and Nate was still no closer to finding Maeve.

It was near dawn and a chill shimmied up his spine. He told himself it was the December cold. Most of the demons would be looking for holes to crawl into to rest from their incessant debauchery and death mongering. Even they had to recharge.

A practicing witch, Nate had always known there were things that went bump in the night. But before taking up with the reapers, he’d never actually killed any of them. Now, of course, that had changed. Everything had changed.

Nate stroked the hound’s head, twisting his fingers into his thick coat, reluctant to call it a night despite his lack of success. Bo had tracked Maeve’s scent all through downtown Meridian, Arkansas, without managing to pin her down. She was always one step ahead…or several. What he found instead was her wake of destruction. The newly soulless wanderers and dead bodies were beginning to pile up. Even with eight active members of the Authority plus Nate, it was getting more and more difficult to collect the casualties and carry them to Purgatory. And now, because the disappearances had not gone unnoticed, the city was lousy with out-of-state manpower, too. Hell, the FBI had even made an appearance and implemented a citywide curfew. Not that it was doing any good. The media posted daily headlines urging people to stay inside, but even with the curfew and the added officers, it was impossible to keep businesses closed and people off the streets, especially at night.

It was a dangerous time for everyone in Meridian—supernatural and otherwise.

Few humans could survive a soul extraction, and if they did, they were left as nothing more than a primal shell. The reapers called them wanderers. To Nate’s pop-culture mind, they were zombies minus the incessant drive to eat fresh brains. One thing was certain. Even the wanderers were as good as dead.

All the reapers, except for Kylen, who remained dubious, hoped that at some point the humans who had been soul raped might be restored. That would mean their untethered souls would have to be rescued from Hell before they became part of its machine. Then they would have to somehow be reinsouled. It had never been done before, and Nate was far from certain that it could be done. Still, they put in the effort. Hope was one of the few commodities they had left.

A cat’s cry caused him to tighten his grip in Bo’s scruff, and a growl vibrated through the beast. Sometimes a cat was just a cat. Sometimes it was something else entirely.

Sure enough, an imp rounded the corner of a long, brick building ahead as he continued down the alley. Clinging to the wall, the imp blinked its yellow eyes at him before shimmying up and onto the roof. More followed. The imps were scouts—minions for demons who walked the earth. And that meant one thing: a demon was close.

Looked like Nate was going to earn his pay tonight after all.

Bo whined beside him, but from anticipation rather than fear. The dog liked nothing better than to dispatch demons, a trait Nate admired.

The demon that entered the alley was riding a teenage boy’s body. Thank God. Nate didn’t think he could stand to take down any more women. If the demons discovered his weakness for that particular flavor of host, he’d be lost. The reapers who were part of the Authority weren’t as sensitive as he was. They didn’t care what sex the hosts were. Maybe, if he were very lucky, he’d live long enough to become so jaded.

The demon walked toward him with all the confidence of a demon in a fresh host. He twitched and jerked his new body down the alley toward Nate, not yet realizing he was walking toward certain death. Bo lived for this shit.

Nate gave the dog the attack signal and his skin crawled as he watched Bo take the young host down like a bear on a bunny. The act was complete in a matter of seconds. Bo looked back for reassurance of a job well done and further instructions.

Bo ate. He could tear and crunch though a body in minutes. Good thing, too. The alternative was even messier. Imps watched, hovering overhead along the edge of the roof. When the black demon left the ruined host body in a stream of shapeless fog, it flew up and over the building and the imps followed it, disappearing from view. Nate watched and waited. No other souls streamed out. He was grateful for that at least. The demons were soul poachers, and these days they didn’t even wait until a person was dead. Nate and the Authority reapers were in an all-out war for the souls of Meridian. If they lost Meridian, they lost the world.

The demon wasn’t dead, but the host most assuredly was.

Most of the folks in the bar tonight hadn’t been so fortunate.

Nate had called in Samkiel and Raguel, the nearest reaper cleanup crew, to take care of the casualties after stumbling upon the scene. One body or even a couple, he and Bo could dispatch. Dozens were a different story.

When the biggest Hell release portal in decades opened in Meridian last May, several demons were freed to wreak havoc on the population. Just when the local reapers nearly had things under control, Camael, a fallen angel and the former Chief of the Order of Powers, had raised the stakes by opening another portal. The dozens became thousands and the whole situation became five billion times worse when Camael inhabited the body of Nate’s newly assigned reaper partner, Maeve.

He hadn’t seen her since.

And now? The full power of the Authority had been reactivated, after many years, and a new team of ten reapers had been recruited to put down the demon invasion and protect the realms from further infiltration. Hell on Earth was one thing. Hell in Heaven? Unthinkable.

Nate’s long-time friend Deacon Walker was the leader of the Authority. He was sympathetic to Nate’s cause, having lost a friend and fellow reaper, Kylen, to demonic possession for more than a century. The problem was that reapers were the perfect hosts for demons and, as it turned out, fallen angels. While demons burned through human hosts in a matter of days, sometimes hours, a reaper could be ridden indefinitely.

Maeve was a reaper.

The jury was still out about Nate’s particular supernatural persuasion. While he possessed some of the more desirable traits and abilities of the reapers, his powers hadn’t manifested enough for him to be fully invested as a reaper. There was no way of knowing if they ever would. The only word that still described him most days was
witch
.

The tattoos along his biceps itched and prickled as he prepared himself to head home. To most people, his markings looked tribal, but they weren’t. They were very specific magic sigils. Magical protection. A guy couldn’t protect himself from every spell, but it sure seemed like a good idea to try, particularly under the current circumstances.

He grabbed hold of the scruff of the hellhound’s neck and felt the familiar pull from the invisible subway reapers used to travel from consecrated ground to consecrated ground—one perk he shared with the reapers. The alley before him shimmered and his vision faltered as he was dragged into the darkness that would bring him home.

Six silver-bullet travel trailers circled him end-to-end as he landed in the common area of Ruth Scott’s family home. It was all that was left. Only the stone walls and fireplace had remained standing after Camael had burned the place to the ground despite Nate’s circle of protection. Construction on the destroyed building wasn’t supposed to begin until spring, but work was already under way. They’d salted the earth, reconsecrated the ground and enforced the circle of protection to include each and every member of the Authority as well as the auxiliary members.

Maeve wasn’t among them.

Their combined reaper Reiki energy and Nate’s spell made the place a fortress against all supernatural beings and the four elements when wielded with magic. Live and learn. Of course, his supernatural protections didn’t do shit to keep humans away. That was what shotguns were for.

Deacon had a small arsenal stored in the communal area where they shared meals in the center of the compound. The first reconstruction had begun there—an octagonal domed structure had been erected in spite of the winter weather. They needed a place to regroup and strategize as well as eat and relax—and escape their roommates. There was only so long a guy, or in this case two, could hole up together in a thirty-foot trailer. That was way too much reaper testosterone in way too little space.

She, Myself & I by Whitney Gaskell
The Homecoming of Samuel Lake by Jenny Wingfield
The Great Big Book of Horrible Things: The Definitive Chronicle of History's 100 Worst Atrocities by Matthew White
Forbidden Alliance: A Werewolf's Tale (Forbidden Alliance Trilogy) by Ayusso, Danae
I'm Only Here for the WiFi by Chelsea Fagan
Star Wars: Jedi Prince 2: The Lost City of the Jedi by Paul Davids, Hollace Davids
Carl Hiaasen by Lucky You
Falling Together by de los Santos, Marisa
Pivot Point by Kasie West
The Unexpected Bride by Debra Ullrick