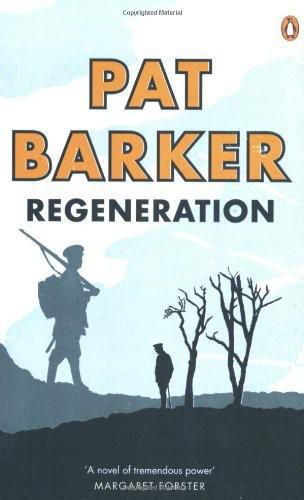 Pat Barker was born in 1943. Her books include the highly acclaimed
Regeneration
trilogy, comprising
Regeneration
(1991), which was made into a film of the same name,
The Eye in the Door
(1993), which won the Guardian Fiction Prize, and
The Ghost Road
(1995), which won the Booker Prize, as well as the more recent novels
Another World, Border Crossing
and
Double Vision.
She lives in Durham.

The publishers wish to thank the following for permission to reproduce copyright material: George
Sassoon for Siegfried Sassoon’s ‘The Rear-Guard’, ‘The General’, ‘To the Warmongers’, the extract
from ‘The Death-Bed’, the extract from ‘The Redeemer’, the extract from ‘Prelude: The Troops’ and
‘Death’s Brotherhood’, all used by permission; and the Estate of Wilfred Owen for extracts from his
‘The Next War’ and ‘Anthem for Doomed Youth’, taken from
Wilfred Owen: The Complete Poems and
Fragments
, edited by Jon Stallworthy and published by Chatto & Windus and the Hogarth Press.

Except in the United States of America, this book is sold subject
to the condition that it shall not, by way of trade or otherwise, be lent,
re-sold, hired out, or otherwise circulated without the publisher’s
prior consent in any form of binding or cover other than that in
which it is published and without a similar condition including this
condition being imposed on the subsequent purchaser

Finished with the War
A Soldier’s Declaration

I am making this statement as an act of wilful defiance of military authority, because I believe the war is being deliberately prolonged by those who have the power to end it.

I am a soldier, convinced that I am acting on behalf of soldiers. I believe that this war, upon which I entered as a war of defence and liberation, has now become a war of aggression and conquest. I believe that the purposes for which I and my fellow soldiers entered upon this war should have been so clearly stated as to have made it impossible to change them, and that, had this been done, the objects which actuated us would now be attainable by negotiation.

I have seen and endured the suffering of the troops, and I can no longer be a party to prolong these sufferings for ends which I believe to be evil and unjust.

I am not protesting against the conduct of the war, but against the political errors and insincerities for which the fighting men are being sacrificed.

On behalf of those who are suffering now I make this protest against the deception which is being practised on them; also I believe that I may help to destroy the callous complacence with which the majority of those at home regard the continuance of agonies which they do not share, and which they have not sufficient imagination to realize.

Bryce waited for Rivers to finish reading before he spoke again. ‘The “S” stands for “Siegfried”. Apparently, he thought that was better left out.’

‘And I’m sure he was right.’ Rivers folded the paper and ran his fingertips along the edge. ‘So they’re sending him here?’

Bryce smiled. ‘Oh, I think it’s rather more specific than that. They’re sending him to
you.
’

Rivers got up and walked across to the window. It was a fine day, and many of the patients were in the hospital grounds, watching a game of tennis. He heard the
pok-pok
of rackets, and a cry of frustration as a ball smashed into the net. ‘I suppose he is – “shell-shocked”?’

‘According to the Board, yes.’

‘It just occurs to me that a diagnosis of neurasthenia might not be inconvenient confronted with this.’ He held up the Declaration.

‘Colonel Langdon chaired the Board.
He
certainly seems to think he is.’

Bryce shrugged. ‘Perhaps Sassoon was gibbering all over the floor.’

‘ “Funk, old boy.” I know Langdon.’ Rivers came back to his chair and sat down. ‘He doesn’t
sound
as if he’s gibbering, does he?’

Bryce said carefully, ‘Does it matter what his mental state is? Surely it’s better for him to be here than in prison?’

‘Better for
him,
perhaps. What about the hospital? Can you imagine what our dear Director of Medical Services is going to say, when he finds out we’re sheltering “conchies” as well as cowards, shirkers, scrimshankers and degenerates? We’ll just have to hope there’s no publicity.’

Rivers made a dismissive gesture.

‘Yes, well, I know. But it still means the press.’

‘And the minister will say that no disciplinary action has been taken, because Mr Sassoon is suffering from a severe mental breakdown, and therefore not responsible for his actions. I’m not sure
I
’d prefer that to prison.’

‘I don’t suppose he was offered the choice. Will you take him?’

‘You mean I
am
being offered a choice?’

Rivers took off his glasses and swept his hand down across his eyes. ‘I suppose they
have
remembered to send the file?’

Sassoon leant out of the carriage window, still half-expecting to see Graves come pounding along the platform, looking even more dishevelled than usual. But further down the train, doors had already begun to slam, and the platform remained empty.

The whistle blew. Immediately, he saw lines of men with grey muttering faces clambering up the ladders to face the guns. He blinked them away.

By arriving an hour early he’d managed to get a window seat. He began picking his way across to it through the tangle of feet. An elderly vicar, two middle-aged men, both looking as if they’d done rather well out of the war, a young girl and an older woman, obviously travelling together. The train bumped over a point. Everybody rocked and swayed, and Sassoon, stumbling, almost fell into the vicar’s lap. He mumbled an apology and sat down. Admiring glances, and not only from the women. Sassoon turned to look out of the window, hunching his shoulder against them all.

After a while he stopped pretending to look at the smoking chimneys of Liverpool’s back streets and closed his eyes. He needed to sleep, but instead Robert’s face floated in front of him, white and twitching as it had been last Sunday, almost a week ago now, in the lounge of the Exchange Hotel.

For a moment, looking up to find that khaki-clad figure standing just inside the door, he thought he was hallucinating again.

‘Robert, what on earth are
you
doing here?’ He jumped up and ran across the lounge. ‘Thank God you’ve come.’

‘I got myself passed fit.’

‘What else could I do? After getting
this.
’ Graves dug into his tunic pocket and produced a crumpled piece of paper. ‘A covering letter would have been nice.’

‘No, you didn’t, Sass. You just sent me this. Couldn’t you at least have
talked
about it first?’

They sat down, facing each other across a small table. Cold northern light streamed in through the high windows, draining Graves’s face of the little colour it had.

‘Look, you’ve made your protest. For what it’s worth, I agree with every word of it. But you’ve had your say. There’s no point making a martyr of yourself.’

‘The only way I can get publicity is to make them court-martial me.’

‘You’re in no state to stand a court-martial.’ Graves clasped his clenched fist. ‘If I had Russell here now, I’d
shoot
him.’

‘Oh, pull the other one. And even if it was, do you think anybody’s going to understand it? They’ll just say you’ve got cold feet.’

‘Look, Robert, you think exactly as I do about the war, and you
do
…
nothing.
All right, that’s your choice. But don’t come here lecturing
me
about
cold feet.
This is the hardest thing I’ve ever done.’

Now, on the train going to Craiglockhart, it still seemed the hardest thing. He shifted in his seat and sighed, looking out over fields of wheat bending to the wind. He remembered the silvery sound of shaken wheat, the shimmer of light on the stalks. He’d have given anything to be out there, away from the stuffiness of the carriage, the itch and constriction of his uniform.

On that Sunday they’d taken the train to Formby and spent the afternoon wandering aimlessly along the beach. A dull, wintry-looking sun cast their shadows far behind them, so that every gesture either of them made was mimicked and magnified.

‘They won’t
let
you make a martyr of yourself, Sass. You should have accepted the Board.’

The discussion had become repetitive. For perhaps the fourth time, Sassoon said, ‘If I hold out long enough, there’s nothing else they can do.’

‘There’s a lot they can do.’ Graves seemed to come to a decision. ‘As a matter of fact, I’ve been pulling a few strings on your behalf.’

Sassoon smiled to hide his anger. ‘Good. If you’ve been exercising your usual tact, that ought to get me at least two years.’

‘They won’t court-martial you.’

In spite of himself, Sassoon began to feel afraid. ‘What, then?’

‘Shut you up in a lunatic asylum for the rest of the war.’