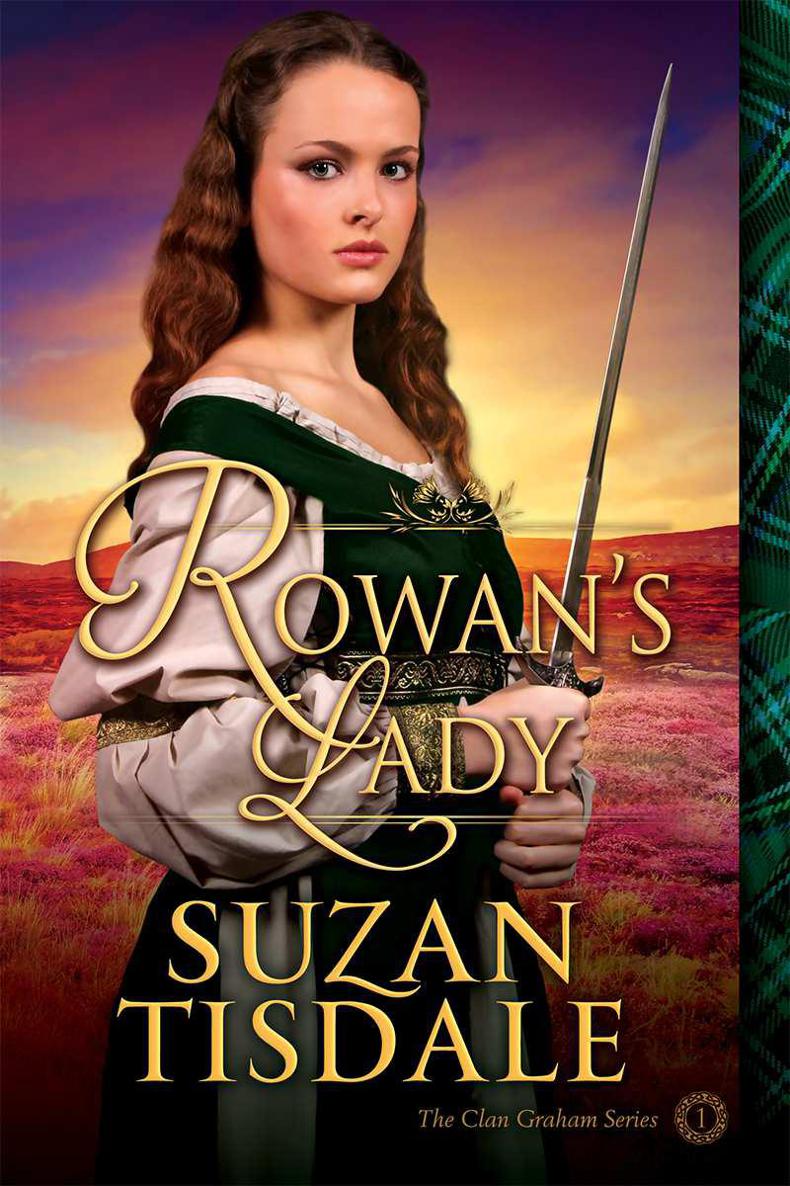 He built impenetrable walls around his heart....

The Black Death showed no mercy when it took Rowan Graham's beautiful, young wife. With his clan nearly decimated, his heart torn to shreds, he is left to raise his newborn daughter alone. Rowan tries to keep the promises he made to Kate on her deathbed, save for one: He is unable to give his heart to another.

She has built walls around her own...

Lady Arline is forced into yet another arranged marriage - loveless and lonely. Behind Garrick Blackthorn's good looks lies a cruel, vindictive man. She wants nothing more than her marriage to end so that she might gain the freedom she has longed for.

Fate will bring those walls tumbling down....

Just before her marriage comes to a bitter and ugly end, her cruel husband kidnaps a sweet, innocent child. Arline does not realize the child belongs to a man from her past, a man who has haunted her dreams for more than seven years, until the night he comes to rescue his daughter.

Rowan Graham is surprised to learn that his enemy's wife is a woman he met but for a few short moments seven years earlier when dark times had fallen across Scotland. The same woman who had helped insure the freedom of his foster father and brother has been risking her life to care for his daughter.

Fate brings them together... but others are determined to pull them apart.

For my mom, the original lady Arline, my aunts, Marilyn and
Jerry. Always the faces of grace and dignity, even in the darkest of times.
Thank you all for teaching me how to laugh.

The list of people I want to thank would take up
more than just a line or two. First and foremost I thank my husband and
children for their support and enthusiasm. I could not do this without them.

A very special thank you to my perfect little
granddaughters. I couldn’t have written the last two books without your help
and inspiration.

Thank you to Hallee Bridgman, for bringing me in
off the ledge, for being a true author-friend and an inspiration. I’ll probably
never grind my own flour, but I know you’d be there to walk me through the
process if I needed you!

Thank you to TJ Mackay. You, my dear, are the
epitome of grace and elegance, and beauty personified.

To all the girls at
InD’Tale Magazine
, I
thank each and everyone of you for your continued support, kind words and
friendship.

Thank you to Natazsa Waters. I just know we were
separated at birth, even if our mothers continue to deny it. I am grateful for
your friendship and your wicked sense of humor.

A very special thank you to my mother-in-law,
Judy. I am in your eternal debt. Thank you for raising such a wonderful man for
me to marry.

And last but not least, a very special thank you to
my beta readers and my Lassies. I love you all.

The Black Death did not discriminate.

Like fire from hell, it spread across England,
Wales, Italy and France. Untethered, unstoppable.

It cared not if the lives it took were of the
noble and wealthy or the lowly born and poor. It showed no preference for age
or gender. It took the wicked and the innocent. It took the blasphemers and the
righteous.

The Black Death took whomever it damned well
pleased.

Rowan would not allow his sweet wife to die alone,
cold, afraid, and in agony, no matter how much she begged otherwise. He would
not allow anyone else to administer the herbs, to apply the poultices, or to
even wipe her brow. He was her husband and she, his entire world.

Knowing that the Black Death had finally reached
Scotland, Rowan’s clan had prepared as best they could. The moment anyone began
to show signs of illness, they were immediately taken to the barracks.
Seclusion was their only hope at keeping the illness from spreading.

Within a week, the barracks could hold no more of
the sick and dying. In the end, the quarantine was all for naught.

By the time Kate showed the first signs of the
illness, the Black Death had taken more than thirty of their people. Before it
was over, Clan Graham’s numbers dwindled to less than seventy members.

At Kate’s insistence, their three-month-old
daughter was kept in seclusion. It was the last act of motherly love that she
could show her child. In the hours just before her death, Kate begged for
Rowan’s promise on two matters.

“Ye shall never be afraid to speak of me to our
daughter. It is important that she know how much I loved her, and how much
we
loved her together.” ’Twas an easy promise for Rowan to make, for how could
he ever forget Kate?

’Twas the second promise she asked that threatened
to tear him apart.

“And ye must promise ye’ll let another woman into
yer heart. Do not save it long fer me, husband. Yer too good a man to keep
yerself to a dead woman.”

He swore to her that yes, someday he would allow
his heart to love another. Silently however, he knew that day would be in the
very distant future, mayhap thirty or forty years. For there could never be a
woman who could take Kate’s place in his life or his heart.

“I love ye, Kate, more than me next breath,”
Rowan
whispered into her ear just before her chest rose and fell for the last time.

Fires were built to burn the dead. When Rowan’s
first lieutenant came to remove Kate’s body to add it to the funeral pyres, he
refused to allow Frederick anywhere near her. Rowan’s face turned purple with
rage, his chest heaved from the weight of his unconstrained anguish. He
unsheathed his sword and pinned Frederick to the wall.

“If ye so much as think of laying a finger to
Kate, I shall take yer life,” Rowan seethed. Frederick knew it was a promise
Rowan meant to keep.

Later, with his vision blurred from tears he could
not suppress, Rowan bathed his wife’s once beautiful body now ravaged with
large black boils. He washed her long, strawberry blonde locks and combed them
until they glistened once again. When he was done, he placed a bit of Graham
plaid into the palm of her hand before wrapping her cold body in long linen
strips.

Alone in the quiet hours before dawn he carried
Kate to her final resting place under the tall Wych Elm tree. He stayed next to
her grave for three full days.

Frederick finally came to see him late in the
afternoon of the third day.

Rowan was resting against the elm tree, with his
head resting on his knees. In his heart he knew Frederick was right, but that
did nothing the help fill the dark void that Kate’s death left in his heart.

For a brief moment, Rowan could have sworn he
heard his wife’s voice agreeing with Frederick. Deciding it best not to argue
the point with either of them, Rowan took a deep breath and pulled himself to
his feet.

For now, he would focus on the first promise he
had made to Kate.

“Ye be right, Frederick,” Rowan said as he slapped
one hand on his friend’s back while wiping away tears with the other. “I need
to go tell me daughter all about her beautiful mum.”

Lady Arline felt weak in the knees. Her stomach
fluttered with unease when she looked into the dark blue eyes that belonged to her
husband of three days, Laird Garrick Blackthorn of Ayrshire. She wasn’t at all
certain if it was the
question
that gnawed, or the cold, stony glare his
face held when he asked it. She swallowed hard, willed her legs and stomach to
settle, and decided honesty was at all times the best policy.

“I am sure I could learn to love ye, m’laird.”
She prayed she didn’t sound as foolish as she felt.

Laird Blackthorn of Ayrshire was a very handsome
man. Tall, lean, and well-muscled, he stood a head taller than Lady Arline.
Short cropped blond hair framed a more than handsome face. Lady Arline imagined
most women would swoon if he chose to grace them with a glance from those dark
blue eyes of his. And if the eyes didn’t lead to swooning, then perhaps the
muscles that rippled under his snug tunic would do the trick.

Truth be told, Lady Arline nearly swooned herself
when she met him for the first time three days ago. They had been introduced
just moments before exchanging their wedding vows. It had been all she could do
not to jump with glee that
this
husband was not only closer in age to
her own, but he was handsome as well. He exuded power, virility. Mayhap,
finally, there would be children in her future.

After the death of her first husband, Lady Arline
had sworn she’d never be duped into another arranged marriage. But her father,
bless him, had been quite insistent that she give marriage another chance. She
had resisted her father right up until the moment she saw Garrick Blackthorn
for the very first time.

There was something, something she could not quite
put a name to, something in Garrick’s blue eyes…they held
something
. But
what? A secret perhaps? She was as yet uncertain and that made her all the more
nervous. Whatever it was, she found it difficult to keep her legs and fingers
from trembling. She clasped her hands tightly in front of her and tried to at
least
appear
as if she were not completely terrified.

Perhaps it was the anticipation of what lay ahead,
on this their first night in her new home as his wife. Her husband had yet to
lay a hand on her, save for the chaste kiss at the alter three days past. He
had barely spoken a word to her during the journey from Lochbraene to Ayrshire.

She wondered, if by chance, he too, was just as
nervous as she.

It was doubtful. A man as handsome as Garrick
Blackthorn must certainly have a significant amount of experience with women
and loving. Nay, it could not be nervousness she saw in the depths of those
dark eyes. It was something else.

Lady Arline reckoned that perhaps it was her own
widespread nervousness that made her mouth go dry and her legs weak.
Undoubtedly he would want to consummate their marriage and perhaps before doing
so, he wanted to know what her feelings toward him might be.

The thought of consummation brought back the
quivering sensation in her legs. She cursed at her own silliness. Her thoughts
suddenly turned to Minnie, her auld maid who had died two years ago.
Just
close yer eyes and do yer duty on yer weddin’ night. It will hurt like bloody
hell, but it does not take long.

It was early evening and they stood in Lady
Arline’s appointed chamber. She wore a heavy silk robe over her thick linen
nightdress. Her wavy and oft unruly auburn hair tumbled down her back and
stopped just above her knees. She hoped that he had a fondness for redheaded
women. She shivered and cursed inwardly for what must have been the hundredth
time that day.