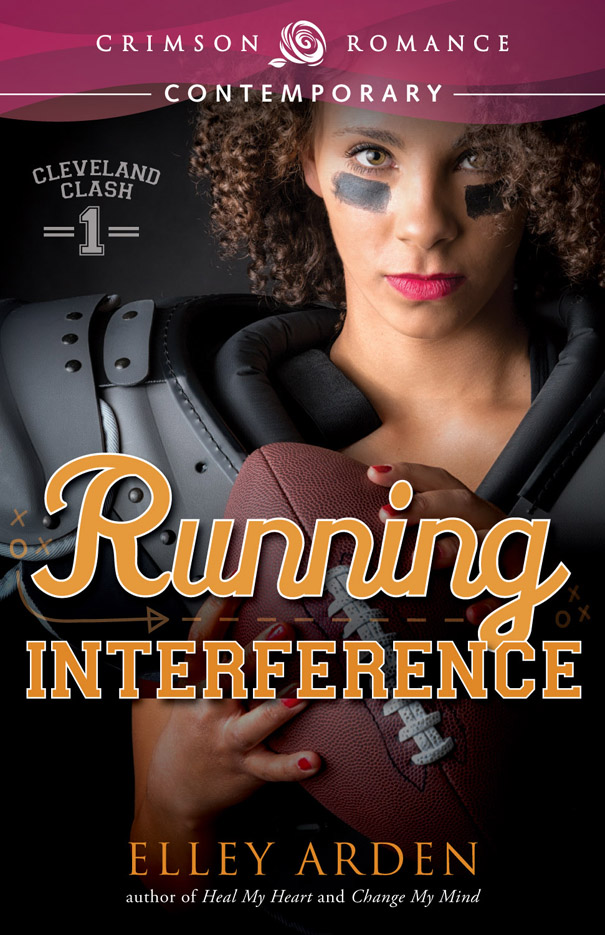 To A.C., who loved this game even more than I do
.

This book and this series started as a bit of a joke during revisions for
Heal My Heart: Book Three of the Kemmons Brothers Baseball Series
. My amazing editor, Tara Gelsomino, loved the secondary character Tanya Martin, and thought an entire series surrounding women football players was not only unique but inspired. So the Cleveland Clash live on, taking their place among sports romances where heroes are normally the professional athletes. (Don't worry. There are hero athletes in this series, too.)

Big time thanks go to Tara, who was as much a part of this series' creation as I was. Her influence is everywhere. Thank you for the email plotting sessions, clip art hunts, and margin notes like “YADDDDDAYEAR!!!” that always made me smile. Your direction is invaluable.

Thanks also go to my husband, who was sitting at a bar with me one Friday night a couple years ago, wondering why I was suddenly so curious about the time he'd spent as the team physician for a women's professional football team. He told me everything he knew about the topic with a smile, and when I needed more, he hooked me up with the people who knew more. He also left me chocolate bars on the kitchen counter when I'd been in my office on deadline long after everyone else had gone to bed. He's the best kind of hero, because he's real.

And finally, to the women who play this amazing game of strength and strategy, thank you. You've inspired me, and I hope my books will inspire other women to not only cheer for women's professional football teams near them, but to also get out and play. Why should men have all the fun?

Mmm. Mmm. Mmm.
There was something about a sunny Sunday morning that put extra spring in Tanya Martin's already speedy steps. No dealing with ornery high school students and excuses about forgotten gym clothes. No football practice. Just hours to spend however she liked at her father's boxing gym.

She lifted her face to the unseasonably warm rays and wished late February in Cleveland, Ohio, always looked like this. But the heaping mounds of filthy snow lining the sidewalk reminded her winter wasn't done with them yet. She didn't care. Today was going to be a great day.

A glass door opened up ahead, and a man backed onto the sidewalk. He was so big his body loomed around the stainless steel framing, and his voice boomed when he laughed at someone inside the coffee shop. Her pace slowed as she took in his profile. Black, fitted ski jacket. Dark denim jeans that clung to his tree-trunk thighs. And a pair of designer work boots that had never set foot on a jobsite.
Not from around.
These new businesses brought in all kinds, sellouts who couldn't get through their Sundays without a double shot of something she couldn't even pronounce let alone swallow.

She put her head down and picked up her pace, wanting to pass before she was forced to say hello. She didn't want her South City neighborhood to change, and she didn't want these people getting comfortable. They weren't wanted. They weren't needed. What this place
needed
was people with a sense of loyalty and convictionâpeople like her parents, who both owned mom-and-pop businesses on this stretch of street. For even longer than her mother had been cooking her “almost famous” pulled-pork and holding twice-monthly Free Soup Fridays at her restaurant, Mama Mary's, her father had been taking kids off the streets and teaching them life skills with the help of boxing and martial arts at his gym. Those things were so much more important than overpriced warehouse condos and a chain coffee shop.

The rich rumble of words came first, followed by a splash of something hot along her neck, and then an impact that had her careening toward the icy snowdrift. Her hands jutted out to break her fall, but she never hit. Instead, a crushing grip circled her right elbow and a jolt set her upright. Somehow her shoulder remained attached to its socket.

She looked from the work boots to the face of the trendily dressed, mammoth man, and her jaw dropped.
Cam Simmons.

Stunned into silence, she reached a hand to her neck and wiped at the droplets.

He pulled a napkin bearing the Coffee Bean logo from his pocket. “Are you okay?” He dabbed the napkin at her neck, then her chest. A little too rough. But the swipes that followed were a little too friendly.

She nodded and brushed his hand away.

How long had it been?
Five years.
Not that she'd been counting â¦ lately. Their friendship had cooled on a barrage of texts and calls that tapered off as he got used to life away from Cleveland. Eventually the distance between them proved too great to cross. Who needed old friends when you had a shiny new multi-million-dollar NFL contract?

And that contract looked good on him, too. It had turned him into an entirely different person from the anxious, overachieving high school boy she'd spent hours with at Pop's gym. Taller and bigger, naturally, but there was also a relaxed confidence gleaming in those deep brown eyes. He didn't just want to be good; he knew he was good.

“What happened to your hair?” she blurted.

He'd had curls that rivaled hers in high school.

He palmed his nearly bald head and smiled. Somewhere angels sang. He'd always been too talented and handsome for his own good.

“I like my helmet to have a snug fit,” he said. “And I was tired of messing around with skull caps. Does it look bad?”

Sly dog. Always digging for compliments, but he didn't need the ego boost. “Do you really care what I think?” Again, the last five years weighed heavy on her mind. There hadn't been so much as a Facebook like or a forwarded chain email between them. “I mean, come on. You're the Super Bowl MVP. You hardly need approval from me.”

“But it would be nice.” He flashed that smile again and her heart spontaneously warmed.

Disturbing.
She did not want to have feelings for him after all these years. Their one night together senior year had muddied the innocent friendship, and it had taken years for her to find a neutral place, where she could hear his name, see his face, watch his games without feeling some sense of loss and hurt.

“I can't believe you're here,” she said.

“I owed my mama the trip. Been promising for years. Got nothing going on until optional team activities in April, so I figured why not.”

That was at least a month away. A month of running into him like this.

Shit.
She backed up. “Well, it was good seeing you.”

“Wait a minute.” He grabbed her arm. Softer than the last time. Even through the layers of her hooded sweatshirt and long-sleeved T-shirt, she felt an unsettling tingle. “Where you running off to so fast? I'll buy you a coffee.”

She glanced behind him at the gleaming monstrosity that required the leveling of two locally owned businesses to create. “No thanks. I'm not a coffee drinker. Besides, I have some ring time waiting for me.”

She did, but if she made a big deal out of it, then she wouldn't be neutral. “Come on.”

They walked the next two blocks with a safe distance between them, talking about the obvious: his Super Bowl win. It seemed safer than delving into their overly personal past. She'd never been so happy to push open the doors to the gym. Her sanctuary. She breathed in the musty smell of hard work and dedication, and exhaled her restlessness over seeing Cam.

“I'll catch ya later,” she said, waving a hand at him and eyeing up the hallway that led to the locker rooms. With any luck, he'd be gone by the time she came out, and if he wasn't, maybe she'd throw on some gloves, challenge him to a few rounds, and teach him a couple things. He might be bigger and stronger, but she wasn't above hitting below the belt if need be. Hell, he deserved it.

It was always good to have a backup plan.

She ducked around a support beam and dragged her hand along the red ring ropes as she passed, smiling at a couple guys who were lifting free weights. This was still going to be a good day. Literally running into Cam Simmons was not going to change that.

Her father's office door opened and out stepped a man in a suit. Business on a Sunday? Or maybe church. That made more sense. She smiled at the man and then at her father, but her father didn't smile back. He looked stricken and pale.

“You okay, Pop?” She went to him, now highly suspicious of the well-dressed man. With all the real estate bullying that had gone on in this “up-and-coming neighborhood” over the past year, she couldn't be too careful.

“I'm fine,” he said, and then he flashed an uneasy look at the man and made a gesture toward the door. “He was just leaving.”

“Who is he?” She directed the question at the suit, who looked down his nose at her.

“Foreman Keller, from Great Lakes Savings and Loan, and you are?”

A banker.
She lifted her chin and looked down her nose at him. “Tanya Martin, Pop's daughter.” She looked at her father who was shaking his head like he wanted this conversation to end.

“Well, Tanya Martin, you might want to tell your father to pay his bills. It would save all of us time and money.”

“Excuse me?” She puffed out her chest. Habit. Two older brothers, four hundred high school students, and a roster spot as a women's professional football linewoman taught her the bigger you looked the more seriously people took you.

“What do you mean it's not my concern?” She set her sights on the suit again. “Why are you here?”