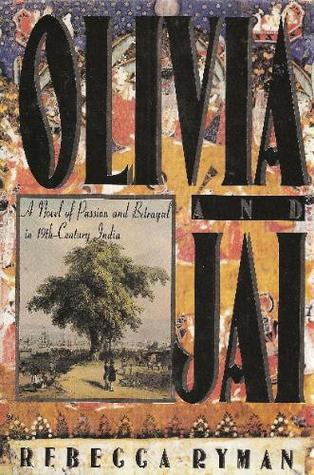 Olivia
and Jai by Rebecca Ryman

Only
the deepest desire could bring them together. Only the darkest betrayal could
tear them apart.

OLIVIA—The
elegant American daughter of privilege, she is seduced by the opulence of a
strange and beautiful culture. But her seduction isn't complete until she meets
the man who becomes her opium... her obsession.

JAI—The
tormented son of an unknown Englishman and an Indian servant girl, he is an
alien in the prejudiced world of the British Raj—a dark, forbidding man Olivia
can neither trust... nor resist.

Together
they explore the sensuous, exotic tapestry of India in 1848—from its riotous
peasant bazaars to tiger hunts in hushed jungles... and, together they defy
every convention of a time and place, swept up in a powerful blend of passion
and frustration that transforms them from devoted lovers to fierce enemies.

A SELECTION OF THE LITERARY GUILD

She
was fascinated and baffled by this strange conundrum of a man, yes; but she was
not yet sure that she even liked him! He was hard, opinionated, arrogant,
twisted with hate and cynicism. He believed in adventurism, thought nothing of
flaunting his moral turpitude before come who may and had no scruples about
achieving his ends with whatever dubious means happened to be available at the
moment. Arvind Singh had professed profound admiration for Jai as a man of rare
courage. In Olivia's view, however, there was nothing especially admirable
about a man merely because he was foolhardy enough to challenge the gods themselves.

All
this Olivia recognized with extreme clarity. What she could not identify was
the capricious, obscure, utterly illogical reason why she could not shake Jai
Raventhorne out of her thoughts no matter how hard she tried. Inexorably, the
world in which she lived was becoming unreal, like a fantasy. Something sly and
unwanted was creeping into her life, taking her away from her roots. And
somehow, at the crux of her disorientation, stood Jai Raventhorne....

CRITICAL PRAISE
FOR
OLIVIA AND JAI!

"A
splendid
book that should give millions of readers great pleasure."
—Greenwich
Times

"Ryman,
a spellbinding storyteller, captivates the reader from the first page."
—Publishers
Weekly

"Has
it all: history, villainy, heroism, romance."
—Boston
Sunday Herald

"
A
first novel so
sweeping in scope, so melodramatic in incident, that one realizes immediately
it is headed straight for the bestseller lists."
—El Paso
Times

"You
won't be able to put it down... an enthralling story of love, mystery and
betrayal."
—Shreveport Times

All
rights reserved. No part of this book may be used or reproduced in any manner
whatsoever without written permission except in the case of brief quotations
embodied in critical articles or reviews. For information address St. Martin's
Press, 175 Fifth Avenue, New York, N.Y. 10010.

Printed
in the United States of America

For
my parents; In ever-loving remembrance

I
would like to express my deep gratitude to my husband for his many accurate
observations and rectifications, and for his tolerance of domestic disarray
over long periods while this book was being written. My warm thanks also to
caring friends and relations who donated freely of their time and thought, not
to dismiss with facile praise but to compliment with painstaking and productive
criticism. To others who advised with wisdom and steered the manuscript into
publication, I owe a debt that will ever be outstanding.

Special
thanks are due to Mr. Thomas J. McCormack, whose often relentless but always
inspired editorial guidance has resulted in a better book than I had envisaged.
And for those whose formidable task it has been to question, to suggest, to
correct, and to finally bring order to a chaotic typescript, I record not only
my gratitude but my unqualified admiration.

Monsoon
clouds, pregnant with rain, growled and grunted across a swollen pewter sky.
The dome of afternoon pressed down on the earth like a soggy blanket, trapping
the oppressive humidity and laying low even the most fortitudinous, their
bodies robbed of energy and their minds of will. Slashing across the city, the
river Hooghly crawled as if on leaden feet, waiting for the gales that would
whip it along and relieve it of its torpor. Not a leaf moved, not a dust devil
stirred; but in the very stillness there was promise. When the storm did break
it would bring with it blessed coolness and once again the earth would breathe.

But
in the meantime, Calcutta sweltered.

Standing
in her kitchen house doling out rations for the evening meal, Lady Bridget
Templewood appeared untouched by the heat. As always, her stance was ramrod
straight. The hand holding the long wooden spoon swooped in and out of the
groundnut oil jar, moving with the mechanical precision of an instrument
devised solely for that purpose. As she counted, her lips framed silent
incantations, giving her the appearance of a vestal high priestess immersed in
some esoteric ritual upon which depended the fate of the Empire. Had anyone
told her this, Lady Bridget would have been flattered. She believed devoutly
that even in this distant outpost of Her Majesty's burgeoning realm, as an
English noblewoman she had obligations to Queen and country from which not even
the kitchen house was exempted.

The
rice, lentils and green beans, all carefully weighed, had been dispensed. The
potatoes—two for each of them and none for Estelle—were in the process of being
peeled by the scullion. Two chickens, plucked and cleaned, squatted by the coal
range awaiting
dismemberment into manageable pieces. On the white marble tabletop waiting to
join the sizzling onions for the
vindaloo
curry were turmeric paste,
chillies, coriander and cumin all ground in vinegar. Hardened by the pungent
flavours of the East, Sir Joshua's palate demanded sharp spices although Lady
Bridget herself would have gladly done without.

Watching
his lady memsahib go through her conscientious daily rituals, Babulal stood by
in silence and impassivity, but within himself he simmered. For two whole days
now he had been patiently waiting for an opportunity to replenish his own
family's depleted larder and he considered it scandalous that it should be so.
For one, his wife nagged him incessantly. For another, if cooks in prosperous
firanghi
households with
bulging stores had to stoop to making their own purchases, was it not a matter
of shame for his entire community? Not for the first time Babulal wondered if
his own meagre pickings from the daily bazaar were worth it considering how
well his counterparts did for themselves in other less stringent households.

The
ayah's sudden scream from the compound shattered Lady Bridget's concentration.
Her hand jerked and sent oil splashing all over the immaculate flagstone floor.
"What on
earth
. . .?"

"Memsahib,
come kweek,
kweek!"
Still
shrieking, the ayah flew through the kitchen door, the whites of her eyes rolling
fearfully amidst the chocolate brown of her face. "Umrican missy mem fall
from gee-gee into nullah ...!" Breaking into hysterical Hindustani, she
burst into tears.

Lady
Bridget congealed. The cornflower blue of her eyes stilled with shock;
incantations forgotten, her mouth rounded in horror. Dear God, if the reckless
girl had really damaged herself, how would she ever face Sean again? Not that
Lady Bridget particularly wished to, but that at the moment was beside the
point. Mindless of greasy fingers, she dropped the ladle to clutch at her
starched muslin skirt and ran out into the compound followed by the rest of the
staff. Keeping time with her feet, her mind ran wild with conjecture; what if
Olivia had broken her neck, injured her spine, disfigured her
face...?
Shaking with
fear, Lady Bridget flew around the double-storied bungalow towards the front
garden, uncaring of her hemline trailing mud through the residual puddles,
mentally expecting the worst. She rounded the final corner—and stopped dead in
her tracks.

Far
from having broken her back, Olivia was, in fact, in the
process of
heaving herself out of the ditch next to the casuarina hedge that separated the
front lawn from the drive. Filled with stagnant rain-water, the ditch was now
churned into a viscous brown soup, much of which clung to Olivia's person. On
the other side of the hedge stood Jasmine, the white mare, neighing
apologetically with her saddle askew and her reins draped around her neck like
streamers. Olivia's new riding cap (fresh from London and bought only last week
from Whiteaway Laidlaw for a rupee and a half) was floating down the muddy
stream visibly unworthy of retrieval. Worse, the groom's cheeky son—too big for
his britches by half anyway—was gripping Olivia's hands in his own in an effort
to help. There appeared to be equal hilarity on both sides.

Lady
Bridget's short-lived relief turned into annoyance and her lips thinned. Even
so, she waited. It was unthinkable to castigate kith and kin in front of the
servants no matter how hideous the crime and how grave the provocation.
Clapping aside the insolent lad, she stalked grimly towards the site of the
mishap. "Are you hurt, Olivia?"

With
a final heave Olivia swung out of the ditch and onto the swampy lawn.
"Only my pride, Aunt Bridget." Her grin beneath the drying mud on her
face was rueful.
"Damn!
I
was so doggone sure she'd be able to do it again!"

Lady
Bridget blanched but decided to ignore the sotto voce expletive. In all
fairness, the child's barbaric speech had improved considerably. And one could
hardly expect miracles in eight weeks as one might with a decently brought up
English girl. "Can you walk?"

"I
think so. I reckon only my knees are bruised and I've had worse, believe
me." Rising unsteadily to her feet, Olivia lifted her dripping skirt to
examine the extent of her injuries. "Bucktooth always says that knowing
how
to fall is the
name of the game. Being a rodeo man himself, I guess he should know." She
laughed, gave her aunt a dazzling smile and started to wring out her skirt.

Lady
Bridget was neither amused nor dazzled. In fact, she shuddered. Pointedly, she
refrained from asking who Bucktooth was apart from a rodeo man, whatever that
might be. Engaging her attention entirely was the horrifying sight of Olivia's
bare legs at which she tried desperately not to look, knowing that that was an
exercise in restraint not shared by her servants. Never having before seen a
white mem's legs—not even sure that they possessed them—they stared openly.
Astonished at the sudden
revelation, the groom's son almost fell backwards into the ditch himself.

Lady
Bridget leapt into action. "Go up immediately, Olivia, and get Estelle's
ayah to pour you a hot bath. I'll be with you as soon as . . .," she
looked around and realized to her dismay that Babulal was no longer part of the
audience, ". . . as I've finished with the stores." Grimly, she
positioned herself between the knot of ogling onlookers and Olivia's bare
knees.

Ronnie and Nancy by Bob Colacello
Fly Me to the Moon by Alyson Noel
The Werewolf's Pregnant Bride by Jane B. Night
From Harvey River by Lorna Goodison
Secrets Uncovered by Raven McAllan
AWOL on the Appalachian Trail by Miller, David
Flight to the Lonesome Place by Alexander Key
Dead Living (Spirit Caller Book 5) by Krista D. Ball
The Railway by Hamid Ismailov
Rebels at the Gate: Lee and McClellan on the Front Line of a Nation Divided by W Hunter Lesser