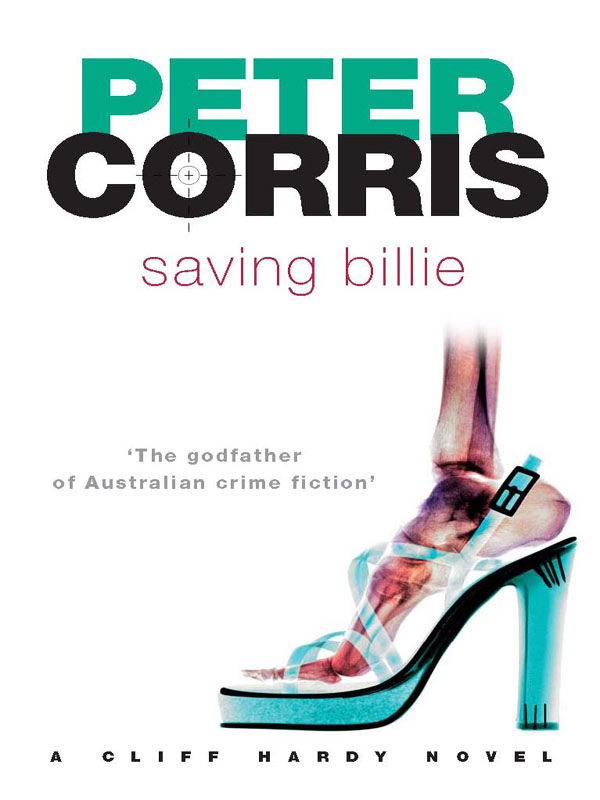 P
ETER CORRIS
is known as the âgodfather' of Australian crime fiction through his Cliff Hardy detective stories. He has written in many other areas, including a co-authored autobiography of the late Professor Fred Hollows, a history of boxing in Australia, spy novels, historical novels and a collection of short stories revolving around the game of golf. He is married to writer Jean Bedford and lives on the Illawarra coast, south of Sydney. They have three daughters.

Thanks to Jean Bedford, Trish Donaldson and Jo Jarrah

The suburb of Liston does not exist, nor, as far as I am aware, do the Island Brotherhood or the Children of Christ. Any resemblance to an actual place or organisations is coincidental.

All rights reserved. No part of this book may be reproduced or transmitted in any form or by any means, electronic or mechanical, including photocopying, recording or by any information storage and retrieval system, without prior permission in writing from the publisher. The
Australian Copyright
Act 1968
(the Act) allows a maximum of one chapter or 10 per cent of this book, whichever is the greater, to be photocopied by any educational institution for its educational purposes provided that the educational institution (or body that administers it) has given a remuneration notice to Copyright Agency Limited (CAL) under the Act.

For Bradon and Trish

I
t wasn't my kind of work, but I was doing a favour for a friend. Hank Bachelor, who'd given me some help in recent times, had got his Private Enquiry Agent licence and was scratching a living at whatever he could pick up.

âIt's a sort of security job, Cliff,' he said on the phone. âAt a party.'

âNo, no, this is a high-class affair. Top people; charity function. Politicians, media types, the glitterati.'

âShepherding drunks to the dunny. Calling them taxis. Seeing no one nicks the silverware.'

âYeah, maybe a bit of that. Come on, Cliff. I'm sick as I can be with this virus and I need to stay in tight with the firm that hired me. With you as a substitute, licensed and all, I won't lose any brownie points.'

Hank is an American who has embraced Australia in every way but still uses American idioms. I agreed to stand in for him at the Jonas Clement charity evening in Manly out of friendship, and curiosity about Clement.

âYou'll have to wear a soup 'n fish,' Hank said.

I groaned. âI hate those penguin suits. They make me feel like . . . a penguin.'

So I hired the gear from a place on Parramatta Road opposite one of the university colleges and not far from my house in Glebe. I walked there, getting as much exercise as I can these days to keep the flab at bay. I'd been there before.

âStill a forty-two long, ninety-three round the tummy, Mr Hardy?' the outfitter said.

Stick-thin himself, he ran the tape over me. âBest to check, some of our clients do tend to expand. Hmm, ninety-four centimetre waist. Not bad for your height and . . .'

âInteresting philosophy. Single or double-breasted? Two piece or three? Cummerbund or not?'

Wearing the suit, with the studs and the dopey bow tie, I presented at Jonas Clement's Manly mansion at the appointed time and showed the hiring firm's credentials with my name substituted for Hank's and my PEA ticket. A man with a solid build and an aggressive manner looked me over as if he'd like to drop his shoulder and bullock me down the sandstone steps. Clement's house was on the water and hard to get toâa matter of parking where you could, tracking down a brightly lit laneway and going through a gate, where one set of steps led up to the house and another led down to a garden and recreational area near the water.

âNot sure about this,' he said, examining the pass.

âI'm filling in for this other bloke. With him you get youth and polish, with me you get experience. Maybe Mr Clement could decide.'

He handed the pass and licence back and gestured for me to go down the steps. âMr Clement has got better things to do. You go down and keep an eye on things. Circulate but don't annoy anyone. Watch out forâ'

âDrunks and light fingers. I've done this sort of thing before.'

âWhat's your name? Just so I know who to come to if there's any trouble.'

âDistantly, and not proud of it, smartarse.'

One to him. I went down the steps and paused where they turned. The view out over the water was the kind that put another half million on the value of a property. They tell us the harbour's full of heavy metal, strontium 90 and whatever, and I suppose it is. Doesn't stop it looking like perfection on a clear night with the lights shining on it.

I tore myself away from Sydney at its best and reached the bottom of the steps where a marquee had been set up over a lawn the size of a bowling green. A portable dance floor was waiting to be shuffled on but the bar was already doing light business although it was early and there couldn't have been more than twenty people around. Two barmen were doling out the drinks and a couple of waiters were circulating with trays.

Three max, Cliff, I said to myself and plucked a glass of white wine from a tray.

Hank had told me that about a hundred guests were expected and from the look of the ice buckets full of bottles and the portable fridges and the bottles of spirits lined up, they weren't going to be thirsty. Away to the left a trestle table about four metres long was laden with food and three young women in cocktail dresses were standing ready to ladle out the potato salad and smoked salmon. A few of the early twenty were eyeing the tucker but no one wanted to be first hog to the trough. I nodded politely to a few people and tried to look as if I belonged.

I sipped the wine. A dry whiteâthat's about as close to identifying a wine as I can get. Crisp, a pundit might have said. I moved out from under the canvas and looked up at the house. It rose from its manicured garden like a medieval fortressâsandstone rising three levels. A flagpole was just visible and an evening breeze was just strong enough to cause its flag to flutter, showing you quick flashes of stripes and stars.

âDon't worry,' a tall man who'd come out to join me said. âThere's an Aussie flag a bit further around.'

âThat's good,' I said. âPatriotism plus. Are you the host?'

âNo way.' He was in immaculate evening clothes, drinking champagne. He glanced down at his empty glass and moved away.

Jonas Clement owned a city FM radio station and a couple of regional stations. He had a stud farm at Camden and substantial interests in a number of racehorses and a successful football club. What distinguished him from other merely rich men was that he did a stint as a shock-jock on his own station. His politics were far right and I'd been told his hero was American humorist PJ O'Rourke, whom he didn't equal in wit, although some said he gave it a good try. He was ardently pro-American and this evening's event was a moneyraiser for American families who'd lost sons and daughters in Afghanistan and Iraq. The right would be out in force and I wasn't expecting to have too many stimulating conversations.

The crowd came in with a rush soon after 10 pm and the barmen and waiters and food servers got busy. A five-piece band started up the kind of white-bread music fivepiece bands play and the noise level rose steadily.

I did a patrol of the house, at least the lower level. There was a kitchen that looked like a set for a TV cooking show, a tiled toilet with a urinal and four stalls, a pool and pingpong room, a spa and sauna, and a room about the size of a squash court with hooks all around it for coats. There was a women's powder room. Pink.

Clement styled himself as a sportsmanâprobably why I kept thinking of his affluence in terms of sporting arenas. To add to the image there were sporting pictures on the walls here and there, but the impression I got was of someone trying too hard.

The party was in full swing by the time I got back to the marquee. Hank had said the punters were paying two thousand per head to be there and the joint was packed, so the take was probably good for a few prosthetic limbs and skin grafts. The men were all dressed as I was, except that some wore white jackets and they no doubt owned the clothes. The women were uniformly expensively turned out in dresses and trouser suits and other creations difficult to describe. They varied from comfortably upholstered matrons to rail-thin creatures who looked as though they lived on mineral water and celery sticks.

The combo was playing something reminiscent of Barry Manilow and the dancers were making the best of it. As so often happens at events like this, there were two outstanding dancers. The woman was a brunette in a red dress. She swirled about, showing an extreme length of very good leg. The man was built and moved like a gymnast and every step they made was in perfect synch. Most of the other dancers stopped to watch, and some of the women looked daggers at their men who were showing excessive interest in the legs.

The barmen and waiters were hard at it and a lot of the calories on the food table had been transferred to the guests. I took my second drink and Thomas, the man who'd quizzed me on my arrival, appeared at my shoulder.