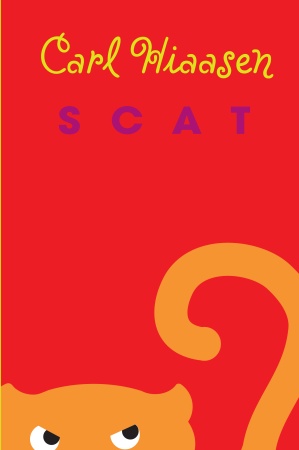 This was proofed by the scanner and called (v1.0). The OCR program that I use interfaces with MS Word. My scans are done so I can read the books on my smart phone and or REB-1100 eBook reader. I use WordMagus to convert .DOC files to .RB and HTML. I use Mobipocket Creator to convert to .PRC.

This is a work of fiction. Names, characters, places, and incidents either are the product of the author's imagination or are used fictitiously. Any resemblance to actual persons, living or dead, events, or locales is entirely coincidental.

All rights reserved. Published in the United States by Alfred A. Knopf, an imprint of Random House Children's Books, a division of Random House, Inc., New York.

Visit us on the Web!
www.randomhouse.com/kids

Summary: Nick and his friend Marta decide to investigate when a mysterious fire starts near a

This is dedicated to the memory of Dr. David Maehr, a gifted wildlife biologist who helped me during the research for this book. Dave spent many years tracking and studying Florida's endangered panthers. Because of his efforts, and those of others who followed, these magnificent cats still roam wild in the swamps and prairies of southern Florida.

The day before Mrs. Starch vanished, her third-period biology students trudged silently, as always, into the classroom. Their expressions reflected the usual mix of dread and melancholy, for Mrs. Starch was the most feared teacher at the Truman School.

When the bell rang, she unfolded stiffly, like a crane, and rose to her full height of nearly six feet. In one hand she twirled a sharpened Ticonderoga No. 2 pencil, a sure sign of trouble to come.

Nick glanced across the aisle at Marta Gonzalez. Her brown eyes were locked on Mrs. Starch, and her thin elbows were planted like fence posts, pinning her biology book open to Chapter 8. Nick had left his own textbook in his locker, and his palms were sweating.

"Good morning, people," said Mrs. Starch, in a tone so mild that it was chilling. "Who's prepared to tell me about the Calvin cycle?"

Only one hand rose. It belonged to Graham, who always claimed to know the answers but never did. Mrs. Starch hadn't called on him since the first week of class.

"The Calvin cycle," she repeated. "Anybody?"

Marta looked as if she might throw up again. The last time that had happened, Mrs. Starch had barely waited until the floor was mopped before instructing Marta to write a paper listing five major muscles used in the act of regurgitation.

Nick and the other students had been blown away. What kind of teacher would punish a kid for puking?

"By now," Mrs. Starch was saying, "the photosynthetic process should be familiar to all of you."

Marta gulped hard, twice. She'd been having nightmares about Mrs. Starch, who wore her dyed blond hair piled to one side of her head, like a beach dune. Mrs. Starch's school wardrobe never varied: a polyester pants suit in one of four faded pastel colors, and drab brown flats. She painted heavy violet makeup on her eyelids, yet she made no effort to conceal an odd crimson mark on her chin. The mark was the shape of an anvil and the subject of wild speculation, but nobody had gotten up the nerve to ask Mrs. Starch about it.

Marta's eyes flicked miserably toward Nick, then back to the teacher. Nick was fond of Marta, although he wasn't sure if he liked her enough to sacrifice himself to Mrs. Starch, who had begun to pace. She was scanning the class, selecting a victim.

A droplet of perspiration glided like a spider down Nick's neck. If he worked up the courage to raise his hand, Mrs. Starch would pounce swiftly. Right away she'd see that he had forgotten his biology book, a crime that would be forgiven only if Nick was able to explain and then diagram the Calvin cycle, which was unlikely. Nick was still struggling to figure out the Krebs cycle from Chapter 7.

"Plants, as we all know, are vital to human existence," said Mrs. Starch, on patrol. "And without the Calvin cycle, plants could not exist. Could not exist. .."

Graham was waving his arm and squirming like a puppy. The rest of the class prayed that Mrs. Starch would call on him, but she acted as if he were invisible. Abruptly she spun to a halt at the front of Marta's row.

Marta sat rigidly in the second desk, behind a brainy girl named Libby who knew all about the Calvin cycle-all about
everything
-but seldom made a peep.

"The chart on page 169," Mrs. Starch went on, "makes it all plain as day. It's an excellent illustration, and one that you are likely to encounter on a test. Quite likely . . ."

Marta lowered her head, a tactical mistake. The movement, slight as it was, caught Mrs. Starch's attention.

Nick sucked in a breath. His heart raced and his head buzzed, because he knew that it was now or never. Marta seemed to shrink under Mrs. Starch's icy gaze. Nick could see tears forming at the corners of Marta's eyes, and he hated himself for hesitating.

"Come on, people, snap out of your coma," Mrs. Starch chided, tapping the pencil on Libby's desk. "The Calvin cycle?"

The only reply was a ripping noise-Marta's trembling elbows, tearing holes in the pages of her book.

Mrs. Starch frowned. "I was hoping for a sea of hands," she said with a disappointed sigh. "But, once again, it seems I'll have to pick a volunteer. An unwilling volunteer . . ."

As the teacher pointed her pencil at the top of Marta's head, Nick raised his hand.

I'm
toast,
he thought.
She's gonna crush me like a bug.

Lowering his eyes, he braced to hear Mrs. Starch call his name.

Great, Nick thought.
She forgot who
I am.

But when he looked up, he saw the teacher aiming her pencil at another kid on the other side of the classroom. The mean old bird had totally faked him out, and Marta, too.

The other kid's name really
was
Duane, and Nick had known him since elementary school, when he was two years ahead of Nick and known as Duane the Dweeb. One summer, Duane the Dweeb grew five inches and gained thirty-one pounds, and from then on everybody called him Smoke, because that's what he wanted to be called. Some kids said it was because he was a pyro.

"So, Duane," Mrs. Starch said sweetly. "Have you finished Chapter 8?"

Rumpled and sleepy-looking, Smoke grunted and raised his eyes toward the teacher. Nick couldn't see his expression, but the slump of his shoulders suggested a profound lack of interest.

"You guess?" Using a thumb and two fingers, Mrs. Starch spun the yellow pencil into a blur, like a miniature airplane propeller. Under less stressful circumstances it would have been entertaining.

Marta reached across the aisle, nudged Nick, and mouthed the words "Thank you."

"For raising your hand," Marta whispered.

Nick shrugged. "No big deal," he whispered back.

Mrs. Starch moved across the classroom and positioned herself beside Smoke's desk. "I see you brought your biology book today," she said. "That's progress, Duane."

"But you'll find that it's much easier to read when it's not upside down." Mrs. Starch rotated the textbook, using the eraser end of her No. 2 pencil.

He tried to flip open the book, but Mrs. Starch pressed down firmly with the pencil, holding the cover closed.

"No peeking," she said. "Tell me how the Calvin cycle produces sugar from carbon dioxide, and why that's so important to photosynthesis."

"Gimme a minute." Smoke casually began to pick at a nasty-looking zit on his meaty, fuzz-covered neck.

Mrs. Starch said, "We're all waiting," which was true. The other students, including Nick and Marta, were on the edge of their seats. They were aware that something major and possibly legendary was about to occur, though they had no clue that within forty-eight hours they would each be questioned by sheriff's deputies and asked to tell what they'd seen and heard.

Smoke wasn't as tall as Mrs. Starch, but he was built like a bull. His size and attitude intimidated all of his classmates and most of his teachers, though not Mrs. Starch. When Smoke tried to flick her pencil off his book, it didn't budge.

He leaned back, cracked his knuckles, and said, "What's the question again?"

Marta groaned under her breath. Nick gnawed his upper lip. The longer Smoke stalled, the worse it was going to be when Mrs. Starch lowered the boom.

"For the last time," she said coldly, "tell us about the Calvin cycle."

"Is that like a Harley?" Smoke asked, and the students erupted in laughter.

Marta covered her face. "Has he got a death wish, or what?" she said to Nick, who had a bad feeling about the whole scene.

"So, Duane, it turns out you're a comedian!" Mrs. Starch said. "And all this time we thought you were just another dull lump with no talent and no future."

"I guess," said Smoke, who had resumed probing his inflamed blemish.

"Well, I am guessing that you haven't even glanced at Chapter 8," said Mrs. Starch. "Am I right?"

Lies Like Love by Louisa Reid
The Shadow Girls by Henning Mankell
Star Trek: TNG Indstinguishable From Magic by David A. McIntee
Halflings by Heather Burch
Forest Shadows by David Laing
Encuentros (El lado B del amor) by Gabriel Rolón
Enemy From The Past (Unseen Enemy Book 4) by Marysol James
The Bouquet List by Barbara Deleo
Demon Inside by Stacia Kane
Shadowy Horses by Susanna Kearsley