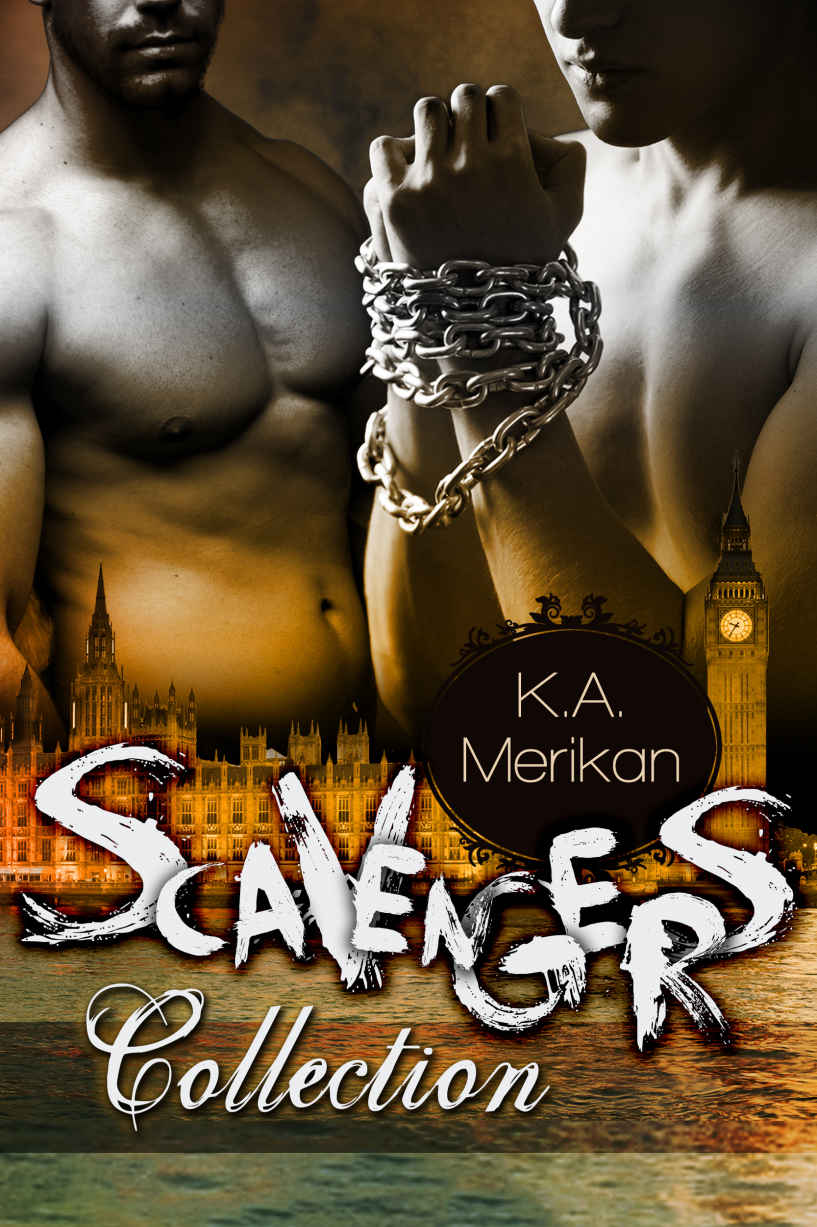 Scavengers is a series of three novellas
and a short story set in a steampunk/neo-Victorian London, six years after a zombie apocalypse.

In 1887, history changed course. A new Plague turned the infected into flesh-eating monsters and bound the population to overcrowded cities. The rapid advance in technology creates opportunities for the rich, but also helps to spread new social ideas which
challenge traditional Victorian morality. These are the stories of gentlemen, prostitutes, treasure hunters, soldiers and so many others who struggle to find love within the walls of a rotting city

is a man of obligation and good morals. After most of his family perished as a result of the new, horrific illness, he didn’t hesitate to live up to his new responsibilities. A few years later, he is married to his childhood sweetheart, with whom he has a son and his political career is going smoothly. Unfortunately, most of his family lands had been overridden by the undead and therefore, bring no more profit. Facing bankruptcy, he decides to risk it all and try to get the jewels hidden in his family manor…

In order to get there, he will need to leave the safe city walls and cross a region swarming with ghouls. He hire
s
Ira Russel
l
, a man whose skill at recovering valuables from lost territories has earned him a small fortune. From the moment James first saw Ira, he knew the man was dangerous, but he could have never predicted just how much of a danger he would be to all that James had always believed in.

This is a work of fiction. Any resemblance of characters to actual persons, living, dead or undead, events, places or names is purely coincidental.

A massive THANK YOU to all the people who have been supporting us and reading our stories up till now. It has been an amazing journey with our Polish-speaking readers and we are incredibly excited to be now venturing into publishing in English.

Also special acknowledgement must go to Kat's sister - Joanna, who has been incredibly supportive and always willing to help with all the technicalities of publishing but also kept motivating us to keep writing.

Ira Russell screamed, smashing the head of a zombified stable boy with a hammer. The monster’s skull broke splashing blood along with some other fluids onto the elegant, flowery wallpaper, Ira’s tight leather jacket and the side of his head as he turned it protectively. He was a large man, whose firmly muscled arms and chest seemed in stark contrast to slim hips, creating an almost geometrical shape.

“Fuck!” he shouted, kicking another zombie out of the room, forcing a tall double door to close and locking it in one frantic motion. Having prevented more of those mindless creatures from coming into the studio, Ira turned around to see his companion, James trying to fight three of them.

The man was lying on the floor screaming his head off in panic. He was shielding himself with a door that had been violently ripped off its hinges. Unfortunately it looked as though the undead were overpowering him. His aristocratic experience in fencing and horse riding proved useless in the face of a brutal, ruthless fight. Some of his elegant clothes were already torn from the previous attacks in the mansion.

Ripping a long, serrated dagger out of its sheath, Ira ran towards the large desk where the fight was taking place. After a few quick strides, he jabbed the blade into the nearest zombie’s temple forcing the now limp body aside to get the other creature, which had already noticed his presence. It turned, opening its jaw, of which only half was covered with rotting skin and muscle. The man first struck its head with the hammer, knocking the creature down onto the bloodstained carpet and then delivered a final blow. James was on the verge of tears by that time, as he pushed off the door he was holding. “There’s one more!” he whimpered, pointing behind the massive oak desk they were standing by.

Ira was not quick enough this time and the undead pushed him on top of the desk with a brute force. The man screamed in fear, but managed to instinctively grab the creature’s throat and thus prevented its teeth from reaching him. The zombie pushed at him even more and climbed on top of Ira, an inhuman, crackling sound emanating from its rotting mouth. The desk wiggled a bit with their frantic movement and suddenly, Ira felt his breath stop as the massive piece of furniture tipped, some of its drawers opening with a clutter.

Gathering all of his strength, he shouted, stabbing one of creature’s eye sockets with a letter-opening knife he managed to take hold of. The monster’s body immediately went limp, falling on top of the man, who cursed loudly, pushing the foul-smelling body off.

“This is the last time, for fuck’s sake!” mumbled Ira, slowly lowering himself to the floor on the other side of the desk. He was still breathless after the adrenaline rush he just experienced. He knew of course, that what he had just said were only words. What else could he do for a living? Go back to the military and endanger his life for a sparse income?

Adjusting the leather garments he always wore during missions, he suddenly fixed his eyes on one of the drawers, which fell open during the fight. Some of the papers it originally contained had fallen out and now lay scattered on the wooden floor.

“Are they all gone yet?” asked James quietly, without getting up from the floor. Ira’s focus though, was on something else. The pages contained some of the most perverse and immoral drawings of homosexual acts he had ever seen, including depictions of exclusively male orgies. He had to actually look twice at some of them, to understand what was going on in the pictures. The funniest part though was the fact that this was definitely the desk of none other than James Hurst, the man who had paid him a small fortune to take part in this ‘adventure’. The aristocrat promised him a part of the gold and jewels, but insisted that he also needed to pick up some important documents from his old office. This office. And this desk. It looked as though the ‘documents’ were simply pornographic images that James could apparently not live without.

Ira stooped down slightly, picking up the nearest print and straightened up, examining it with a calm expression on his face. It depicted two men being intimate in what seemed to be a stable. A half-naked young servant was buggering a man dressed in fine evening clothes, who was presumably his master. Ira turned the piece of paper in his hand, so that the illustration faced its owner and fixed his gaze on James, with a slight pout.  He had to admit that the aristocrat’s good looks were one of the factors that made him agree to this quest right after completing the previous one. After all, one was always more willing to rescue a damsel... well, a young prince rather, when they were a looker.

And even now, as James’ eyes widened slowly and a deep red blush crawled up his face, he noticed that the young aristocrat was handsome. His eyes were of a deep chocolate color, that complimented the long, chestnut hair. When they began this trip, it was tied with a silk ribbon at the back of his neck, but now it was tangled and loose, after all they went through to reach this part of the mansion. He also lost his expensive velvet jacket when one of the undead clutched to it in the corridor. At that moment, he was sitting on the floor in just a cream colored, cotton shirt and brown vest embroidered with golden thread. At least his choice of trousers and boots was more sensible - both closely fitted and comfortable.

“I...” H
e bit his lip, looking at Ira as if in confusion. “I have no idea where that came from...” James had obviously lied, his hands were trembling, his face was tense and red, though it still looked strikingly handsome thanks to the distinct features: a pointy chin, high cheekbones and a straight narrow nose.

Ira lifted his brow looking him straight in the eyes and very slowly lowered the illustration to the desk. “It's none of my business,” he declared in a low voice, though he couldn't help but look at the other man in a slightly different way.

In stark contradiction to what he had said earlier, James stood up, approached the desk hurriedly and dropped to his knees. He didn’t pay any attention to Ira as his eyes roamed over the pages nervously, almost as if he was sorting through them to decide which ones to take. Ira noticed that getting a hold of those illustrations must have been more important to him than personal dignity. Seeing him like this, hair scattered on his shoulders, face flushed and on his knees right at Ira’s feet, the standing man felt a sudden rush of desire running through him. Licking his lips, he stood there in silence, observing the aristocrat’s frantic moves. In a way, he didn’t sense a chance before. James was not of slight build and had no effeminate characteristics, like some of the male prostitutes in the docks. On the contrary: he was as tall as Ira, with wide shoulders, although there was an aristocratic softness to his skin.

“That worth a lot to you?” Ira asked, scanning the man’s young face. He fished a small pipe out of his trouser pocket, along with some tobacco and matches.  He then secured the door tightly and since there were no sounds coming from the other side, he decided this was a good moment to relax before proceeding with their plan.

James looked up at him slowly, with caution. “It’s for this particular research I do...,” he mumbled, apparently doing his best to keep a straight face.

“Well, I imagine it must be very tedious?” teased Ira good naturedly, while calmly preparing his pipe.

“Y... yes,” James stuttered a bit. “A man needs a lot of good morality in him, to deal with this kind of obscenity.”

“True, true. One would hardly believe what some chaps daydream about when closing their mouths around the bit of a pipe,” said the other man, starting to smoke and filling the room with the sweet smell of tobacco.

James’ lips parted as he looked up at Ira in silence. “Yes...” he said finally. “Men cannot be trusted.” He continued sorting the juiciest pages into a neat pile, next to a suitcase with a lock.

Ira snorted, feeling his lungs being filled with warm, pleasant smoke. “That’s true,” he said quietly, looking out the window.