Read Screw Everyone: Sleeping My Way to Monogamy Online

Screw Everyone: Sleeping My Way to Monogamy 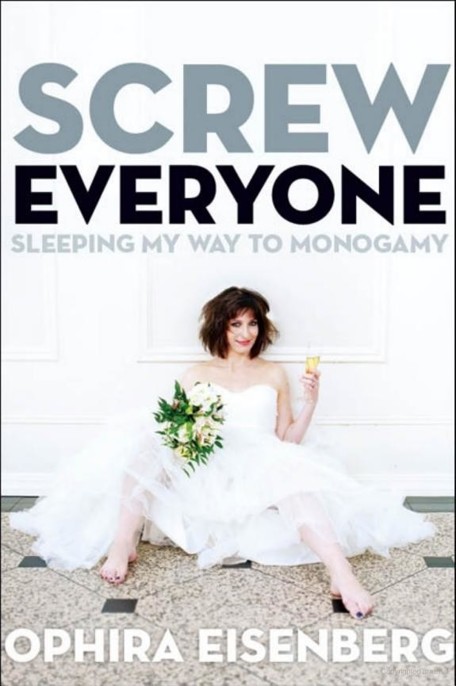 SLEEPING MY WAY TO MONOGAMY

Sleeping My Way to Monogamy

All rights reserved. No part of this book may be reproduced or transmitted in any form without written permission from the publisher, except by reviewers who may quote brief excerpts in connection with a review.

Screw everyone : sleeping my way to monogamy / By Ophira Eisenberg.

For Jonathan, who claims that counter to what
I wrote on page 221, he was not reluctant
about paying for the wine, whatsoever.

CHAPTER 5:
Tommy, Can You Hear Me?

CHAPTER 7:
The Whore of Fraser Island

CHAPTER 9:
The Trouble with Fieldwork

CHAPTER 14:
Screw No One

“My only regret in life is that I didn’t drink enough Champagne.”

T
he names of the men in this book have been changed because most of them are named Dave.

And there are a lot of names in this book. Then again, it
is
called
Screw Everyone
, so I’m delivering on that promise. You might wonder if the quantity of men indicates that I possess a special talent or I’m some sort of knockout. Au contraire, my friend. I’m not effortlessly pretty, but I do clean up well. My real gift is that I’m not fussy. If we were talking about food, I’d be considered “adventurous,” in wine circles, “unpretentious,” and in dating terms, “a slut.” If there were such a thing as Lady Scouts, I would have easily earned the booty-call badge: an embroidered silhouette of a girl ordering two drinks at last call.

When most people think of a slut, they envision a woman who is a lost soul, wildly insecure, mentally unstable, and possibly dumb. Au contraire encore! I might not speak great French, but I am not dumb.
And I didn’t set out to be a slut; frankly, I didn’t even realize I
was
one. I just thought I was being nice.

Call me an enthusiastic consenter, or a fairly responsible hedonist, but sleeping around was often the by-product of getting what I wanted. I felt empowered going against the accepted “rules” of society by intentionally going home with a guy. They weren’t just random guys. I
picked
them. That being said, I was an advocate of equal opportunity hook-ups, with everyone from jazz musicians to blind albinos.

Right from the start, I planned and strategized my potential romantic encounters like a veteran criminal. My quest in life went beyond wanting to “try anything”; I wanted to try
everything
. Sex and relationships became my drug of choice. What turned me on the most was the seduction, the thrill of trying to get someone to like me, and seeing how far I could take it. Rarely was it a problem to get the ball rolling; the issue was how to control it once it picked up speed. By my estimation, dating was 1 percent confidence and 99 percent troubleshooting.

And then there is the simple case of efficiency. Say what you will about going all the way on the first date, but if you want answers about compatibility faster than what Google can provide, it’s the best way to go.

Plus, I like men. I never considered them “the enemy” or an unsolved mystery to be analyzed to death. I had too many other things to worry about. I didn’t relate to any of the classic dating rules, either. If you believe you can master your romantic fate by playing games, like waiting three days to call someone or pretending to be busy on a Friday night when you’re really just watching
Prime Suspect with
an overpriced
bottle of Chardonnay, then fantastic. But I think the only person you’re fooling is yourself. I’d rather slip into my favorite pair of jeans and head over to the local
Pig and Whistle
pub for a quick pick-me-up. Experience showed me that if there was anything I could count on in life, it was another beer and another boyfriend in my future.

After thirty years of intense study in Canada’s school of relationships, I graduated by moving to New York City, which baffled me on every level. Much like affordable apartments, relationships were not easy to come by. I retaliated by boldly claiming that I didn’t want to find “a relationship.” I didn’t believe there was such a thing as “the one.” I wanted to have a good time and enjoy my freedom with guys I consciously didn’t want to get to know. Underlying this was the fact that despite gender stereotypes,
I
was the one with an intense fear of settling down. I was sold on the idea that letting the same someone in, year after year, would stagnate my personality.

When men have this problem, it’s called “commitment issues.” When women have it, it’s referred to as “hitting the jackpot.” At least that’s what most of the guys I dated thought.

As luck would have it, eventually I would be faced with a new challenge: I was introduced to someone who didn’t respond to the brash and freewheeling character I’d invented for myself. Moreover, he wanted the real thing: marriage, commitment, stability, old-fashioned love—which, like a spray of DEET, repelled me and made me want to fly as far away as possible. Unfortunately, I’d already done that by moving to New York. So I stayed. And this is the story of how I discovered myself, conquered my fears, and even found the “real thing”
through promiscuity. That may sound as backward as saying “cocaine saved my life!” but it’s true. I traveled from flask to flask, futon to futon, gathering data, figuring one day I’d put it all together, and like a mad scientist, build my own perfect Boyfriend Bot. It’s not the ideal plan for everyone, but I give it four gold stars.

I know I gave away the ending in the book’s title, but I guarantee you that by the end you’ll still be surprised that I got married, and a little that I’m still alive.

If you’re wondering,
is this book for me?
Well, if you’re the kind of reader who orders another round just to see if you can seal the deal with the depressed bass player because “Hey! I’m sad too! We have so much in common!” then the answer is yes. If, when you’re on a first date, your guy finds an “old hit of acid” in his wallet, and you immediately agree to wash it down with an espresso, then not only is this book for you—it’s also
about
you. And if you fell in love with your high school sweetheart and you’re living “happily ever after” in a castle converted into condos, you need this book more than ever. It’s how you’ll deal with your next marriage.

If you’re a guy whom I hooked up with in the past and you’re now madly flipping through this book, wondering why you can’t find your story, I need to tell you that unfortunately, not everyone made the cut. I’ll let you know if I ever need to do callbacks.

Kidding aside, I’m very grateful for the men who populate the pages of this book. Not one of them could be classified as a true-blue asshole. They had their troubles, they had their habits, they had questionable haircuts, but with few exceptions, the guys I spent my bedtime
with were totally worth it. Most were navigating through life as messily as I was, often unsure of what direction they were headed. So we slept together to see if that shed any light on the path. Some batteries just had a shorter lifespan than others.

These are the highlights of my relationship resume, from my newbie days as a tween to my efflorescence as a (mostly) willing bride-to-be. But before all those Daves, at the ripe age of eleven, I met my inspiration. A boy named Brad . . .

O
n the first day of seventh grade, I took my hair out of its two braids and wore it down for the very first time. This was junior high. Things were different. According to all the Judy Blume books I’d read, shit was about to get real.

On the second day, Brad Moore approached me after Mrs. Cairn’s English class and asked me if I wanted to “go around.” Brad Moore had curly brown hair, a freckled face, and a silly smile, but his most attractive quality was that he liked girls. While most other boys were still punching us in the arm and running away, squealing like preschoolers on a sugar high, Brad Moore was more likely to casually approach and tell you how pretty you looked in your rainbow suspenders. The guy knew how to work a homeroom.

I didn’t know what “going around” meant; I pictured us arm in arm, promenading around the playground, while our classmates
applauded. I had no idea if I even
liked
Brad Moore but figured the best way to find out was to say yes. My girlfriends deliberated and advised against it, claiming that going around was a slippery slope to getting knocked up. I was naive, but I wasn’t dumb. I knew from observing my older siblings that he’d have to buy me
something
before he could do that. I think the real reason they were threatened by my budding romance with the class Don Juan was because I was the first girl in our group to get attention from a boy. I have no idea why he liked me. It certainly wasn’t because I was the most attractive or most popular girl in our class, nor because I had the biggest video game console at home. Maybe it was because Brad Moore, even as a tween, had some primitive sense that I was the perfect girl for him: the kind who never says no.

In actuality, “going around” turned out to be a pretty lackluster affair. All we did was make dumb faces at each other in biology class and eat lunch at the same table. There was no applause or chance of a pregnancy scare. We didn’t even hold hands. I couldn’t understand what all the fuss was about. That is, until the night of the Halloween dance.

I went dressed as a sexy alien, in a purple and silver ’60s mod dress I found at the Goodwill, my face covered with sparkles and my hair sprayed blue. He went as a punk rocker: green hair, fake tattoos, and a sleeveless jean jacket covered with safety pins—because
duh
, we all knew that large numbers of safety pins equaled punk rock. We slow danced to the last song of the night, Led Zeppelin’s “Stairway to Heaven,” edging closer and closer together until my lips were nearly pressed against his ear. I inhaled him deeply, and
whoa
, my nerves
sparked like foil in a microwave. All of a sudden I understood every episode of
Dallas
, every Danielle Steel novel, every Tina Turner song. I hung on to him even tighter, as if it would ground me, but it only made the tingles intensify and multiply. To this day, the smell of tinted Halloween hairspray turns me on.