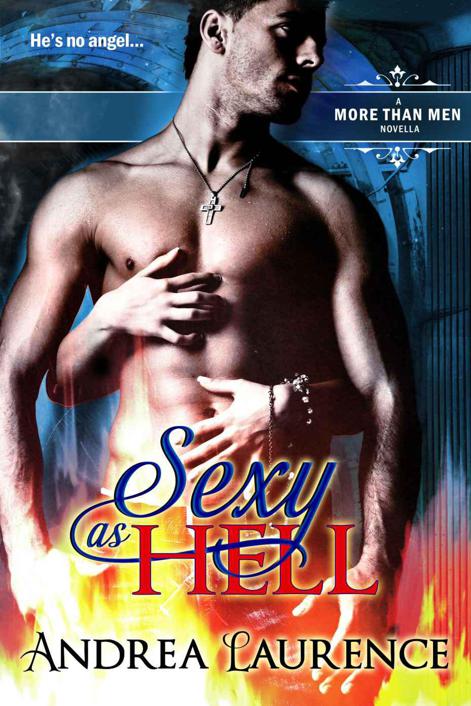 A More
Than
Men Novella

All rights reserved. Except for the use in any review, the reproduction or utilization of this work in whole or part in any form by electronic, mechanical or other means, now known or hereafter invented, including xerography, photocopying and recording, or in any information storage or retrieval system, is forbidden without the written permission of the author, Andrea Laurence,
[email protected]
.

This is a work of fiction. Names, characters, places, and incidents are either the products of the author's imagination or are used fictitiously, and any resemblances to the actions persons, living or dead, business establishments, events or locales is entirely coincidental.

Other books by Andrea Laurence

More Than He Expected

**A More
Than
Men Novella

Camille’s long blonde hair spilled across Seth's chest. Her thighs straddled him, the muscles clamped tightly to his hips. Every move of her body sent a shockwave through him as she ground her hips against the full length of his erection. He yearned to reach out and touch her, but she’d pinned his arms over his head. She had a disturbing amount of strength for such a lithe figure.

The only thing between them was the thin slip of her red lace panties. If his hands were free, he’d rip them off and dive into her warmth before she could say a word about it. But his wrists still held fast in her hands. All he could do was grit his teeth and pray she wouldn’t tease him for much longer. But he wouldn’t beg. He refused to, despite the fact that he'd waited months for this moment. Hell, he'd waited a millennium at least for a woman like Camille, although time had gotten a little fluid to him.

"
Tell me you want me,
"
she said again, leaning down and whispering the words into his ear. Her hot breath stung the sensitive flesh of his neck and sent a spike of hot need down his spine.

"
You know I do,
"
he growled between gritted teeth. He leaned his head up off the pillow to bite at her earlobe, but she pulled away.
"
Let go of my hands a
nd I’ll show you just how much.
"

She gazed down at him and laughed. Her laughter was unusually deep, with a sinister edge to it. He'd never heard her make a sound like that. His sweet, southern neighbor was a ray of golden sunshine in his dark, disturbing world. He dismissed the thought as Camille let go of his hands and dragged her razor-sharp fingernails across his bare chest.

Seth hissed, red welts rising over his skin, but he didn't care.
They would heal almost immediately, anyway.
Instead he focused on the newfound freedom of his hands. They went immediately to Camille’s waist, tearing her panties from her with a satisfying rip and casting them to the floor.

"
Yes,
"
she smiled,
raising
up enough to let him maneuver their bodies and sink deep inside of her.

The sensation of her wet heat enveloping him was almost more than he could take. Every nerve in his body screamed out for instantaneous release, but he wasn't about to let this end anytime soon. "Damn, you feel good."

"I know." She tightened her muscles around him, sending a shockwave through his body. Arching back, she started moving over him, slowly at first, then gradually increasing in speed.
"
Yes, yes,
"
she repeated to the rhythm of her hips.

Seth reached forward and took one breast in each hand. The nipples peaked against his rough palms, the firm flesh giving way to the pressure of his fingertips. The harder he squeezed them, the louder she moaned and the more ferociously she rocked her hips against him.

It felt amazing, but this would all be over in seconds if he didn’t slow Camille down.
"
Hey.
"
he said,
"
tak
e it easy. We’ve got all night.
"

Before he could argue, he felt her body almost shift deep inside. Her inner muscles uncoiled, clamping down and wrapping around his shaft. An overwhelming sensation he’d never experienced before
exploded in his groin
, but it was tempered by a touch of anxiety as he realized he couldn't withdraw any longer.

"
Seriously,
"
he tried to push her off of him, but she held fast. Now the anxiety escalated to fear. Something was wrong. He could feel her drawing the energy out of him even faster than she was coaxing his climax.

Seth was growing dangerously weaker by the minute.

"
Stop,
"
he protested, but she mocked him,
a smile
lighting up her eyes as they started to glow blood red in the dim room. Instead, her hips moved even more furiously, coaxing the life to pour out of him faster.

Seth Holloway shot up straight in bed. He eyed his dark, empty bedroom for a threat, but he was alone. The pounding of his heart was the only thing he could hear as his ragged breath slowly returned to normal.

He flopped back down against his pillows. That was one hell of a dream. Seth had dreamt of Camille several times since she moved into his building, but they had never been anything like that before. Maybe he was working too much. It wasn't as though he had anything else to fill the unending hours of his life, but his mission was blurring into his personal life if he was dreaming his sexy neighbor was a demon.

Seth frowned and turned his head. The glowing numbers on his alarm clock proclaimed it was nine-fifteen in the morning.
A perfectly reasonable time to get up.
Late by most standards.
Normal standards, at least.
Unfortunately, Seth was hardly normal. He’d been out working until nearly sunrise, and was most nights of the week. It was better than sitting around his apartment ticking away the unending minutes of his life.

But sometimes, some days, he wished he could be normal. Have a day job. Take a vacation. Writhe around with a woman that he didn't intend to kill or banish when he was through with them. But there was a reason Seth had walked the face of the Earth for more than fifteen hundred years. And it wasn't so he could take his neighbor out for coffee and get laid.

Unfortunately, he hadn't given away his libido when he signed away his soul for immortality.

He should've read the contract a little closer before he signed, but being moments from a painful and violent death had provided a necessary sense of urgency. What could be wrong with it? He was selling his soul to the Archangel Michael. Would an angelic messenger of God have an untrustworthy contract?

But they didn't understand lust and pleasure the way humans experience it either. It would never occur to them that he might want to do something other than
battle demons for the rest of eternity.

Seth took a deep breath to wish away the real erection his dream had elicited. It wasn’t really a dream, anyway. It was a sign of work to come. If Camille's demonic red eyes hadn't been the first clue, the unmistakable sensation would’ve been the next. He could feel the prickle at the back of his neck, the sudden awareness that he wasn’t really alone in his apartment anymore. The presence wasn't threatening, he'd recognize it anywhere, but it certainly wasn't welcome at the moment.

His head snapped to the left to see his chair now occupied by none other than the Archangel himself. He was slouched down in his seat, casually leaning his face into his hand. There was no glow, no blinding white light,
no
halo. Not even great, awe-inspiring wings. He was just a man in a white suit with long blond hair. An attractive man, but nothing like the movies portrayed him to be. Seth secretly wondered if they saved the theatrics for more important encounters or if it was all just for publicity.

Fighting Dirty: A Stepbrother Romance (When The Gloves Come Off Book 2) by Moore, Lila
Restless (Drunk Girl's Fantasies Short Story One) by Evans, Lily
Omega by Robert J. Crane
Shadow of Power by Steve Martini
SUMMATION by Daniel Syverson
A Trail Through Time (The Chronicles of St Mary's) by Jodi Taylor
The Sword of the Lady by Stirling, S. M.
The Secret War (Jack Blank Adventure) by Matt Myklusch
Miss Lizzie by Walter Satterthwait
High Hunt by David Eddings