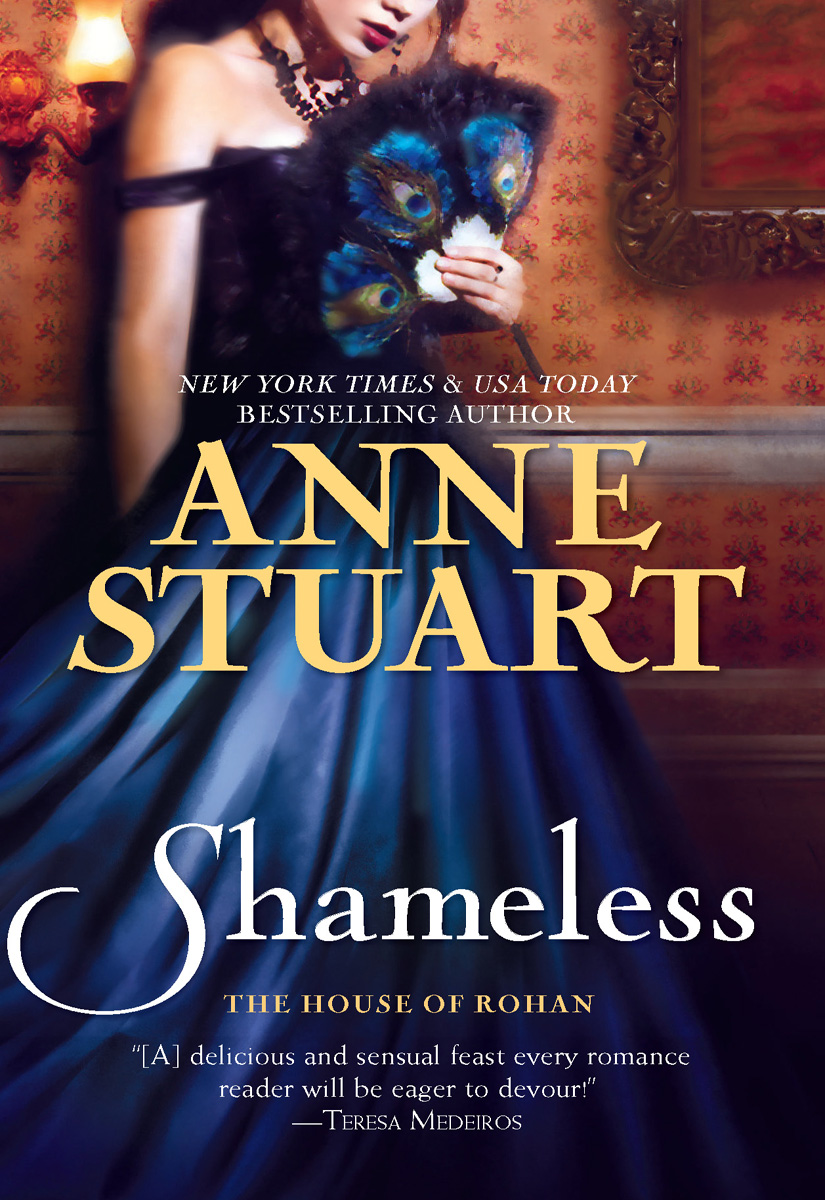 “Anne Stuart delivers exciting stuff for those of us who like our romantic suspense dark and dangerous.”

“The strong plotline and marvelously crafted characters flesh out a love story that’s a feast for those who prefer lots of heat and depth of plot.”

“Anne Stuart proves once again why she is one of the most beloved and reliably entertaining authors in the genre. Every book she writes is witty, inventive, dark and sexy—a wild adventure for the mind…and the heart.”

—Susan Wiggs on The House of Rohan

“Stuart crafts a heated romance with a glimpse into the darkness of passion and the humor of love while maintaining a strong plotline and a powerful secondary love story. These are marks of a grand mistress of the genre!”

THE HOUSE OF ROHAN

And don’t miss the online prequel
“The Wicked House of Rohan”
Free for a limited time!

THE HOUSE OF ROHAN

For Lynda Ward,
who saves my butt time after time,
and Lauren A. Abramo,
the best rights director in the universe.

B
enedick Francis Alistair Rohan, Sixth Viscount Rohan, arrived at his town house with a mission. First and foremost, find a biddable bride, get an heir and a spare on her and then proceed to ignore her for the rest of their lives.

The second and more pressing need was to get thoroughly and royally fucked.

London was the best place to take care of these pressing needs. In fact, there was nowhere else he
wanted to be. He was tired of his house in Somerset, even more tired of his parents’ house in Dorset. His brother Charles was simply annoying, with his smug wife and their smug children. And his sister’s place in the Lake District was untenable due to the fact that he was certain to murder his brother-in-law if he was forced into any proximity with him.

At least he was properly enchanted with Miranda’s unending succession of offspring, even if they were fathered by that spawn of Satan commonly referred to as the Scorpion.

No, at least the familiar house on Bury Street was empty of loving but interfering parents, siblings and anyone else who wanted to fuss over him. He was handling his second widowhood perfectly well. His headstrong wife had died in childbirth, as his first wife had, and he’d come to the conclusion that he was better off marrying someone made for breeding. He hadn’t loved Barbara as he had Annis, but her death had still been difficult. The year of mourning was thankfully over, and he had returned to London for the two aforementioned reasons.

He’d already chosen his new bride. The Honorable Miss Dorothea Pennington would do him very well. She wasn’t fresh from the schoolroom, though at three and twenty she was still young and strong enough to be able to give him the children he needed and well-bred enough not to cause him much trouble. She was everything that was proper, and once he wed her he wouldn’t have to think of her again.

And if she were unfortunate enough to die after
presenting him with a couple of boys, he would take it in stride instead of mourning desperately, as he had after his first wife’s death in childbed. After all, any woman unlucky enough to marry him was probably doomed anyway, two wives gone already. Lucky in cards, unlucky in love, they said, and he was an excellent gamester.

He was about to rap on the front door with his walking stick when it was flung open, and Richmond, his majordomo, greeted him with his usual repressed effusiveness. “Your lordship! We had no idea you would be returning to us.” He signaled the coachman as he moved to allow Benedick to enter. “The house is, of course, ready for you, but had I known I would have endeavored to have fresh flowers brought in.”

“There’s no need, Richmond,” he said, stripping off his greatcoat and gloves and handing them to him. “Flowers are the least of my worries. I need a hot bath and food and a nap and a little breathing space before I can face anyone.”

Richmond made that discreet noise he tended to use when he wished to impart something unpleasant, and Benedick halted his stride toward the stairs, wheeling around to look at him.

“Spit it out, man,” he said, trying not to sound too irritable. Richmond was one of the few people he tended to spare the brunt of his bad temper. He’d known the man since he was in leading strings, and while he hovered like the others, he did so unobtrusively and with only the occasional look of reproach.
The only other human being on the face of this earth capable of making him feel guilty was his mother, but fortunately she and his father were traveling in Egypt.

“Master Brandon is here, my lord.”

“Brandon? Here?” He was flooded with both astonishment and annoyance. “We thought he was up in Scotland, fishing. How long has he been here?”

“Two months, my lord.” There was something in Richmond’s tone that conveyed a great deal. Brandon was in trouble. Which came as no surprise—ever since he’d returned from the Afghan Wars he’d been a changed man, no longer the cheerful boy who’d entered the army expecting a great adventure.

It was four in the afternoon. The younger brother he knew rose with the birds and was out riding by the time the sun was full. “Is he ill?”

“I do not believe so, my lord.” Richmond was an excellent servant—he anticipated his master’s every need. “He is in the blue room at the end of the hallway.”

Benedick took the steps two at a time, his long legs eating up the distance, irritation and worry fighting for dominance. Irritation won. When he reached the bedroom at the far end of the second-floor hallway he flung open the door without knocking, strode into the Stygian darkness and flung open the curtain, letting in the bright afternoon light.

The figure sprawled out on the bed didn’t move,
and he knew an instant’s dread, one he refused to consider. He went over and yanked back the cover to find his baby brother lying there, still in his breeches, his back rising and falling.

He was too thin. The scars on the left side of his torso were healing slowly, but Benedick knew how pity scourged a man, and he refused to feel any. “Wake up, you miserable reprobate, and tell me what the hell you’re doing here.”

“Not likely—this is my house you’ve chosen to usurp. Why aren’t you in Scotland?”

Slowly Brandon rolled over, and even in the shadowed light of the bedroom he could see the ruin of his once-handsome face. The mortar that had killed his commanding officer and seven of his comrades had only taken half of Lord Brandon Rohan’s pretty face, turning it into a horror of torn flesh that even now managed to both break Benedick’s heart and enrage him. For some strange reason he felt he should have been able to protect his headstrong younger brother, kept this disaster at bay. Though, if their father had refused to buy him colors, Brandon would have run off and enlisted. He had been army mad, determined to become a hero.

He was a hero, indeed. And a shell of a man.

“Looked your fill, Neddie?” Brandon used the old nickname that only his brothers were allowed. “Lovely, aren’t I?”

“It’s healing,” he said without sympathy. “What are you doing abed at this hour?”

“Don’t you think I’m better off being a night creature? Who wants to look at this in broad daylight?”

“I never thought you were one for self-pity,” Benedick said scathingly.

Brandon’s mouth twisted in a parody of a smile. “Trust me, brother mine, I have been experimenting with all sorts of things that are new to me.” He sat up, swinging his legs over the side of the bed. “I suppose you’re going to write mother and father and tell them I never went to Scotland.”

“Why should I? They’ll only worry, and I know full well what a trial their concern can be. If they only visited in on you then you would be well served, but I expect they’d fuss over me, as well. So no, baby brother, I shan’t tell on you. Is that why you chose my house over the family manse in Bury Street? So no one would rat on you?”

Brandon’s smile was without humor. “You know me well. As I do you. There’s no way you’re going to allow me to catch a few more hours of sleep, is there?”

“Not likely. Where were you that you returned home so late?”

“None of your damned business,” Brandon said sweetly, and for a brief moment Benedick remembered when that sweetness had been real. “I have friends.”

“Doubtless. But you’re not invited.”

“None of your damned business.”

“Are we going to keep going round and round?” Benedick demanded.

“As long as you keep asking me questions I have no intention of answering. Don’t worry—I’ll remove to a hotel while I find rooms…”

“Take a damper, Brandon,” Benedick said irritably. “You’ll stay here. In truth, I don’t give a damn what you do as long as you don’t interfere with my plans for the next fortnight.”

“And what plans are those?”

“I plan to get engaged. And to indulge in all manner of acts of sexual gratification.”

“Presumably not with the same female…and I trust you’re restricting yourself only to females?” There was an odd languor about Brandon, the faint teasing in the questions almost pro forma.

Benedick fought down his uneasiness and fixed his baby brother with a haughty glare. “My tastes are narrow in that regard. And I do not think the Honorable Miss Pennington will be the type to satisfy my rather urgent demands, do you?”

“
She’s
going to be your next wife?” Brandon laughed mirthlessly. “That shows a singular lack of imagination. Then again, if she’s going to die you’re probably better off picking someone as cold and judgmental as you are. She’ll do nicely. So if she’s not the one to satisfy your…er…sexual urgings, who is?”

“I rather thought I’d start with Violet Highstreet.
If I can find her. I gather she left Mrs. Cadbury’s establishment.” Benedick didn’t like the slow, wicked smile that crossed his younger brother’s ravaged face.

“Excellent choice,” Brandon purred. “I can give you her new direction. I expect she’d be more than happy to come to you this evening. And I’m afraid Mrs. Cadbury’s excellent house is no more. You’ll have to find some new source for your tame excesses. In the meantime, I’m going out. And don’t ask me where.”

Benedick resisted the impulse to protest. His planned excesses felt far from tame. “My interest in your activities was simply a momentary lapse, baby brother. You may go to the devil any way you please.”

“Decent of you,” Brandon replied. “I intend to.”