Read Whispers of the Heart Online

Whispers of the Heart 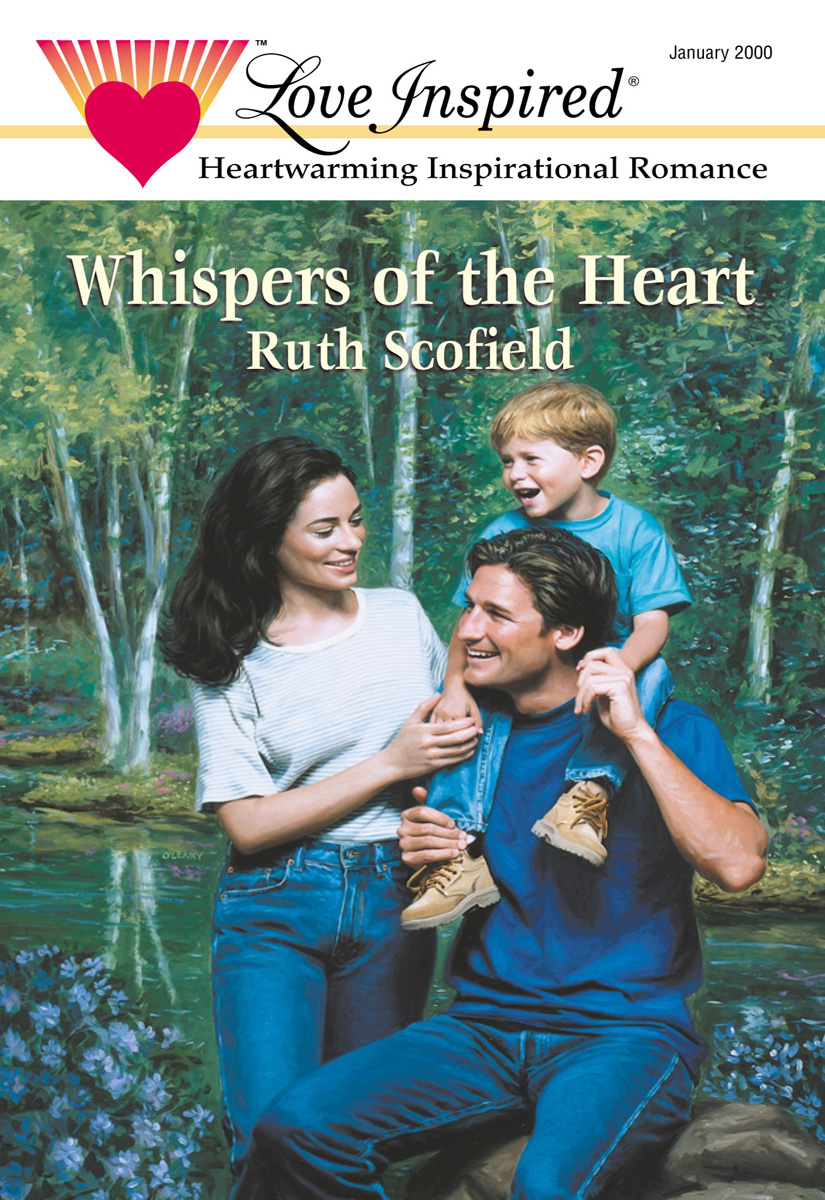 Autumn was not unhappy.

Many things brought her enjoyment.

Yet it wasn't enough. It would never be enough.

She didn't want to remain alone forever. All her life she'd felt a hunger to belong to someone, to be cherished and loved. To have someone who would never leave her, never desert her.

Autumn wanted that more than life. To give love and give herself to a mate.

She glanced up at Brent. And felt more vulnerable than she had in years.

Her protective wall had been breached. She wanted to freely love Brent and his little boy.

And something in his gaze told her he knew
exactly
what she wantedâ¦.

Whispers of the Heart
#89

became serious about writing after she'd raised her children. Until then, she'd concentrated her life on being a June Cleaver-type wife and mother, spent years as a Bible student and teacher for teens and young adults and led a weekly women's prayer group. When she'd made a final wedding dress and her last child had left the nest, she declared to one and all that it was her turn to activate a dream. Thankfully her husband applauded her decision.

Ruth began school in an old-fashioned rural two-room schoolhouse and grew up in the days before television, giving substance to her notion that she still has one foot in the last century. However, active involvement with six rambunctious grandchildren has her eagerly looking forward to the next millennium. After living on the East Coast for years, Ruth and her husband now live in Missouri.

Whispers of the Heart
Ruth Scofield

Now faith is being sure of what we hope for and certain of what we do not see. This is what the ancients were commended for.

To my sister, Joyce Burke, artist extraordinaire, who brushes every soul she meets with the vivid colors of her own faith and love.

B
rent Hyatt leaned against the door frame of the unfurnished, unfinished loft apartment watching the three women inspect the space. Two, obviously, were sisters; twins, if he didn't miss his guess, though they didn't look exactly alike. Young twenties, he thought, pretty and raring to locate where others of the under thirty set hung out. Though the Riverfront Market area wasn't exactly Westport, it had its growing interest among the younger crowd.

The third woman, midforties, appeared to be a real estate agent.

“I think this has wonderful possibilities, don't you, Autumn?” one of the sisters said. The other, gazing out the north window, seemed to be in deep contemplation and didn't reply.

“It's a great deal,” the real estate person added enthusiastically. “But you'll have to make up your mind fairly fast. Most of these new loft apartments are rentals, not up for sale like this one, and this
particular block is becoming more popular and filling up fast. The building across the street is already half taken, and like this one, the top two floors are residential apartments. You won't be lacking neighbors.”

Brent glanced at his watch, knowing he'd arrived early for his own appointment to view the place with Laureen Shore, a friend who was also a real estate agent. He planned to keep his word to look at the apartment, but he already knew it wouldn't do. He wanted a first-floor office for his architecture design firm and probably would take the one across the street.

“You can have everything finished in a month's time and pretty much to your own specifications.” The Realtor pushed her sales points as she finished speaking, then glanced a question toward the sister who had spoken.

The woman at the window held silent, the long lines of her slender, long-limbed form unmoving. Only a quarter profile showed a tender edge of mouth and chin, a tip of nose.

“Arranging the space to suit your purposes has its appeal, don't you think, Autumn?” her sister spoke again, a persuasive note in her voice. “And the morning light is excellent.”

The woman unexpectedly turned swiftly, the words, “Yes, Spring. I'll take it,” tumbling from her mouth before she spotted him lounging in the doorway. Whatever else she was about to say died without a whimper. She simply stared at him. The other two women turned just as Laureen came up behind him.

“Oh, Brent. I'm sorry to be late,” Laureen said. Then spying the other party, she turned her attention their way. “Oh, hello, Eleanor. Didn't know you were showing the apartment this morning. We don't mean to intrude.”

“No prob, Laureen,” the other Realtor replied. “You can show the place if you want to, but I believe my client has first claim on it.”

“Hmmâ¦too bad,” Laureen commented, repositioning her black leather purse over her shoulder. “The view is good from here. Come along in, Brent, and take a peek.”

“Hi, ladies.” He smiled in a friendly way, sauntering into the room's center as he spoke. “Great location for small businesses. What kind of space and visibility are you searching for?”

“No visibility needed,” Spring replied after throwing Autumn a searching glance and apparently deciding once again that Autumn would choose not to answer. “We're lookingâ¦ah, rather, my sister is looking for an apartment to combine with an art studio.”

Yes, the sisters had to be twins, Brent decided. They had the same slender, long-limbed stature, with chestnut hair and wide green eyes; though the shy one seemed a tad vulnerable, while her sister did the talking.

“Nice space here,” he agreed, watching Autumn's face. He liked the shape of it, almost a perfect oval. unusual, he mused, to find a pretty woman who didn't leap into conversation the moment an opening allowed. She seemed content to listen rather than offer her own opinion.

“And an improving neighborhood. It's nice to see it growing in popularity and these old buildings revitalized.” He paused a second, giving her a chance to respond before continuing. “Mixed use, though. Might be a little unsettling at night for a single woman's residence.”

“Oh, I don't think there's anything to worry about,” Eleanor interjected quickly. “A nice young couple is moving in on the floor below next week. And the first floor already has an option from a law firm for the whole floor. I think one of those partners plans to live in one of the second-floor apartments.”

“It's all right, Eleanor.” Autumn spoke decisively, seeming to take his words as a challenge. “I'm not put off by the neighborhood and I like the apartment. It suits me perfectly. In fact, I even like the thought of taking the whole floor, too. That way I can rent the second half or not to suit myself.”

Not totally shy unless she chose to be, he revised his opinion.

“Sis, are you sure?” her twin asked, doubt, concern, and hope evident in her face. “Really sure?”

“Actually, yes I am, Spring. I know you thought I'd never decide, but now I have. This place doesn't scare me, truly. And if I do take the whole floor there'll always be a place for you when you decide to come home. Now you can leave for New York as soon as you pack your bags. I'll be just fine, Spring. Honest.”

He wondered if she was as self-confident as she sounded. A certain tone in her voice suggested a bit more bravado than sincerity. Nevertheless, she held staunchly to her decision.

“Sorry, Brent.” Laureen laughed, and shrugged her shoulders, elegantly clad in a designer raspberry-colored suit. “Looks like you're out of luck today. But that whittles us down by one more. There's three other good downtown spots you can choose from that will serve you just as well. Shall we move on to see the next one?”

“That's not necessary, Laureen,” he murmured, his gaze remaining on Autumn. “I think the first floor across the street will be an ideal location for the firm. And I know what's been done to the building, since my firm handled the new design.”

“Well, you might have said so before,” Laureen replied, letting a note of irritation show. “Come on, we'll draw up a lease right away. We needn't have stopped in here at all. I only thought the viewâ¦”

Ignoring Laureen's hint to leave, he strolled over to the same window Autumn gazed through to take in the vista, smiling casually at her when he arrived. True to his first impression, a shy light shone from her gaze; she let her lashes fall, but she stood her ground at the wide window. He thought her shyness appealing, an old-fashioned art.

“Hmmâ¦” he murmured. “Interesting. Kansas City's first courthouse would've stood right over there,” he said and pointed, hoping to draw her out. “You interested in history?”

She gave him the barest of glances before replying, returning her attention to the view. “I really haven't given it much thought since school.” Her voice was a tad husky, as though it didn't get much use. “Except for how it applies to art.”

“You're an artist, then? What's your medium?”

“Oh, watercolors. Sculpture.” At his curious glance, she explained. “They're two opposites, of course, but I love the immediacy of the watercolors and the hands-on, solid thing that sculpture brings.”

“Sometimes. But only at private galleries, like Mirror Images,” she said, naming a gallery only three blocks away. “IâI prefer theâthe quieter displays rather than anything like the Plaza Art Fair.”

At mention of the Plaza Art Fair, some kind of a shutter came down in Autumn; something in her withdrew. Keenly observant, Brent wondered at it. Held in the fall of each year, the huge, long-standing juried exhibit featured artists from around the nation. Its crowded attendance was legendary. What about it caused her discomfort?

“I'll look forward to viewing your work. Done anything commercial?”

She moistened her lips before replying. “I have done a few architectural drawings, but, IâI prefer not to if I don't need the money.”

Of course! Autumn Barbour. He'd seen her work, a series of artist renderings of a proposed housing addition.

“Do you plan to open a gallery of your own then?”

“Oh, no. Nothing like that,” she said. Did he detect a note of panic in her denial? “I couldn'tâ¦”

“Brent, check the time,” Laureen reminded him. Laureen always grew impatient when she thought he talked too long with someone she didn't feel worth his time. “We really should be going. We're due at
the Shearsons' at six and we should go over the lease before you sign it.”

“Sure, Laureen. I'll be right there.” He lowered his voice a notch. “Well, looks like we'll be something like neighbors. I'll see you around. Maybe after you move in, we could have coffee together?”

Her hesitant response wasn't all that encouraging for developing a friendship. Not encouraging at all. She'd barely glanced at him as he turned to leave.

At the door he couldn't resist one backward glance. Autumn remained gazing from her northeast window, her back to the room. Nothing about her stance indicated she had any interest in the others there. Everything about her said she had no care that he'd gone.

Brent got the feeling he'd been talking to a will-o'-the-wisp.

Lured In (Dark Paradise, #1) by Avent, V. R.
Dancing Lessons for the Advanced in Age by Bohumil Hrabal, Michael Heim, Adam Thirlwell
Jake's Law: A Zombie Novel by James Gurley
Dead and Kicking by McGeachin, Geoffrey
A Rip in Time (Out of Time #7) by Martin, Monique
In the Heart of the Wind Book 1 in the WindTorn Trilogy by Charlotte Boyett-Compo
How to Entice an Earl by Manda Collins
Take Me Deeper by Jackie Ashenden
DARK CITY a gripping detective mystery by CHRISTOPHER M. COLAVITO
Highland Master by Amanda Scott